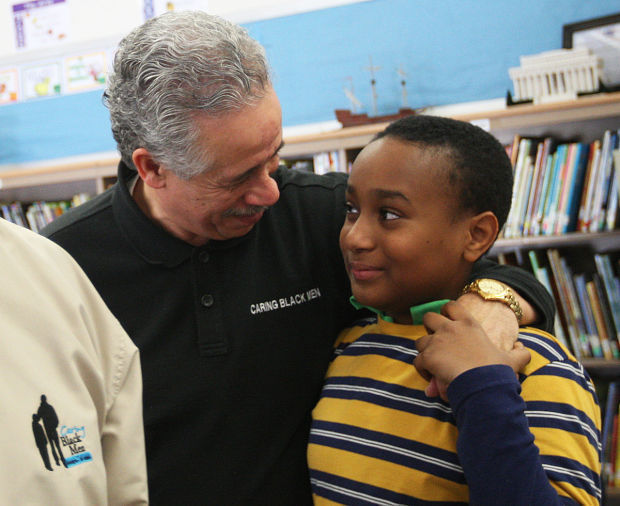 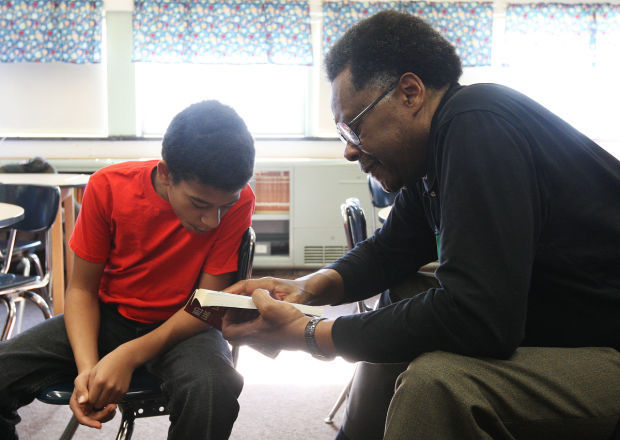 Jesse Price shows student Taaron Williams the word 'tenacity' in the dictionary during a meeting with students at Harris School.

Founder Jeffrey Perkins woke up one morning and looked at the news, as he does most mornings, and was struck afresh by the number of young black men accused of crimes. Knowing that a high number of them grew up without a father, Perkins got an idea.

“Every morning I get up early, and every morning I'd see the news and see these young men's faces on there,” Perkins said. “One morning, I said, you know what? We as African-American men in this community should try to do something about that.

“I just called some people and had about 20 guys show up at my house, and we sat down and talked about it and decided to go to some sporting events.”

By going to football games, making themselves visible, walking around and chatting to the boys in a friendly way, Perkins said, the men hoped to be a positive influence and a willing ear. Most of the men in the group are retired.

Howard Edwards, who was principal at Stephen Decatur Middle School at the time, started holding Saturday study sessions for students preparing for the Illinois Standards Achievement Test. Perkins and his friends attended, too, cooked breakfast for the kids and helped them on the computers as they practiced reading and math skills. During the actual testing, they were in the hallways to encourage kids to stay focused during the long, grueling test.

“Then we said we'd sure like to have a classroom and talked to (former Superintendent) Gloria Davis about holding sessions with the boys,” Perkins said.

Seven years later, Caring Black Men are in 13 of the 22 schools and visit weekly to meet with boys, recommended by staff, who could benefit. Over the years, member James Harris, who has been with the group from the beginning, has developed a curriculum of topics, with handouts. They discuss good character, learn a new word – recently, that word was “tenacity” – and perhaps most importantly, they do not mince words.

“Don't wish, do,” Perkins said to Harris School students at one session.

Nobody ever says “I wish” unless they have regrets, Harris added.

“You have to make a firm commitment and then be willing to work at it,” he said. “We're not giving anything away. There ain't no chocolate in here.”

Christmas is over and vacation is behind them, Perkins said. It's time to refocus and get back to work.

One of the main things they teach boys is that boys look for someone to blame; men take responsibility, Perkins said.

Harris recalled one young man whose teacher called them for help. This youngster was getting good grades and had no behavior problems, but he was being bullied, and his teacher worried that he would lose heart and possibly decide that fitting in was more important than good grades and behavior.

Some kids wear bad behavior as a “badge of honor,” as he put it, and convince other kids that's the way to be cool. The men added the boy to their weekly group, where he found the support to stay the course and ignore his tormentors.

As the years have gone by, the men have been asked to target their presentations for specific situations. They speak to sixth-graders about the transition into middle school and eighth-graders about moving into high school. Though at first their idea was to concentrate on boys in the intermediate grades and up, school administrators have asked them to speak to boys as young as kindergartners.

“It may seem real informal, but there's some structure to it, also,” Harris said.

Caring Black Men's newest member, Al Williams, is a retired microbiologist who worked at Tate & Lyle, and his inclusion is important because he provides boys a role model of a black man who is a scientist, he said.

Instead of just telling them that math and science are important and that those careers are within their reach, he is living proof. And the other men like to kid him that when he started volunteering, he insisted he would only be prepared to take on two schools and is already up to five.

Caring Black Men recently received its 501(c)3 status as a tax-exempt nonprofit organization. Perkins said they don't do any fundraising and are not in the business of raising money, but occasionally someone wants to donate, and they wanted to have that status for that reason. Any donations are funneled directly into helping boys, such as the three young men who received $5,000 apiece to help with college expenses last year.

In addition to acting as positive male influences in the lives of the boys they meet with, Perkins added, the men provide a network of friendship and fellowship for each other.

“We talk to each other the way men do,” Perkins said.

And as founder, his phone rings constantly with requests for help from families and teachers who know a boy who could benefit, white and black boys. About 23 percent of the boys in their groups are white.

Harris said they've been asked why they call the group Caring Black Men, which seems to put more emphasis on race.

Teacher and staff shortages are still an issue for Illinois schools, with more than 4,000 openings statewide.

The Illinois Heartland Library System has come to the rescue regularly when she couldn't find the next book in a series at the Decatur Public Library.

First Gig is a week-long camp ending in a public performance that allows kids 10 to 17 to get a taste of what being in a band is really all about.

Macon County school districts are making tentative plans for fall based on current health guidelines, but plans have to be fluid in changing conditions.

Mikayla Lehman hosts Never Too Small to Ball basketball camp at Decatur Christian School to help children stay active and learn new skills. This is the fourth year of the camp.

Decatur police sergeant, educator team up to Cycle Across Illinois

Cycle Across Illinois is an annual event to raise funds for the families of fallen law enforcement officers. The 340-mile ride began in Alton on Thursday and ends in Chicago on Sunday.

The Decatur school board at its meeting on Tuesday approved contracts for Juanita Morris, coordinator for the Jerry J. Dawson Civic Leadership Institute and for Zach Shields, executive director of the Decatur Public Schools Foundation.

Jesse Price shows student Taaron Williams the word 'tenacity' in the dictionary during a meeting with students at Harris School.