Become a Member
Read Today's E-edition
Share This
Dance it out: Choreographer brightens first week at Argenta-Oreana Elementary 🎵
0 Comments
Share this
1 of 2 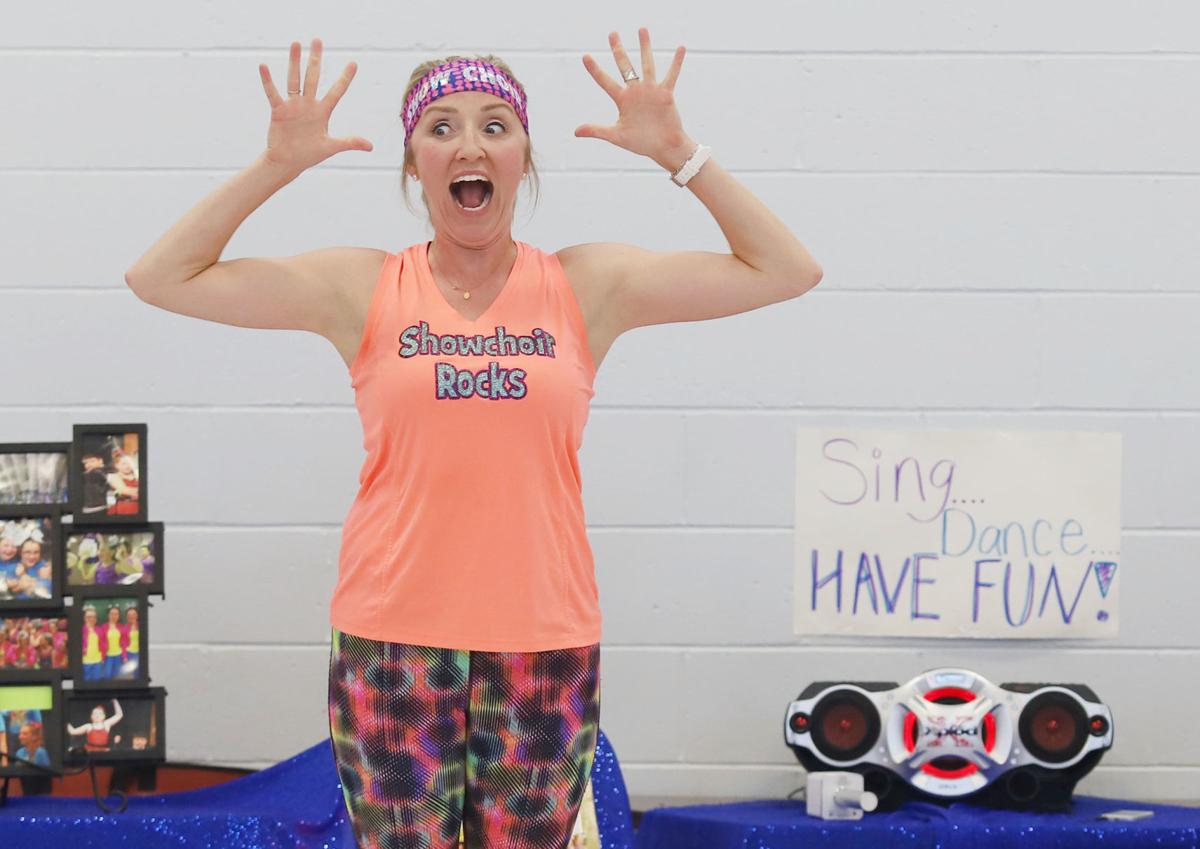 Professional choreographer Jennifer Toney teaches kindergartners a dance during one of her presentations at Argenta-Oreana Elementary School Thursday. Online gallery at herald-review.com/gallery 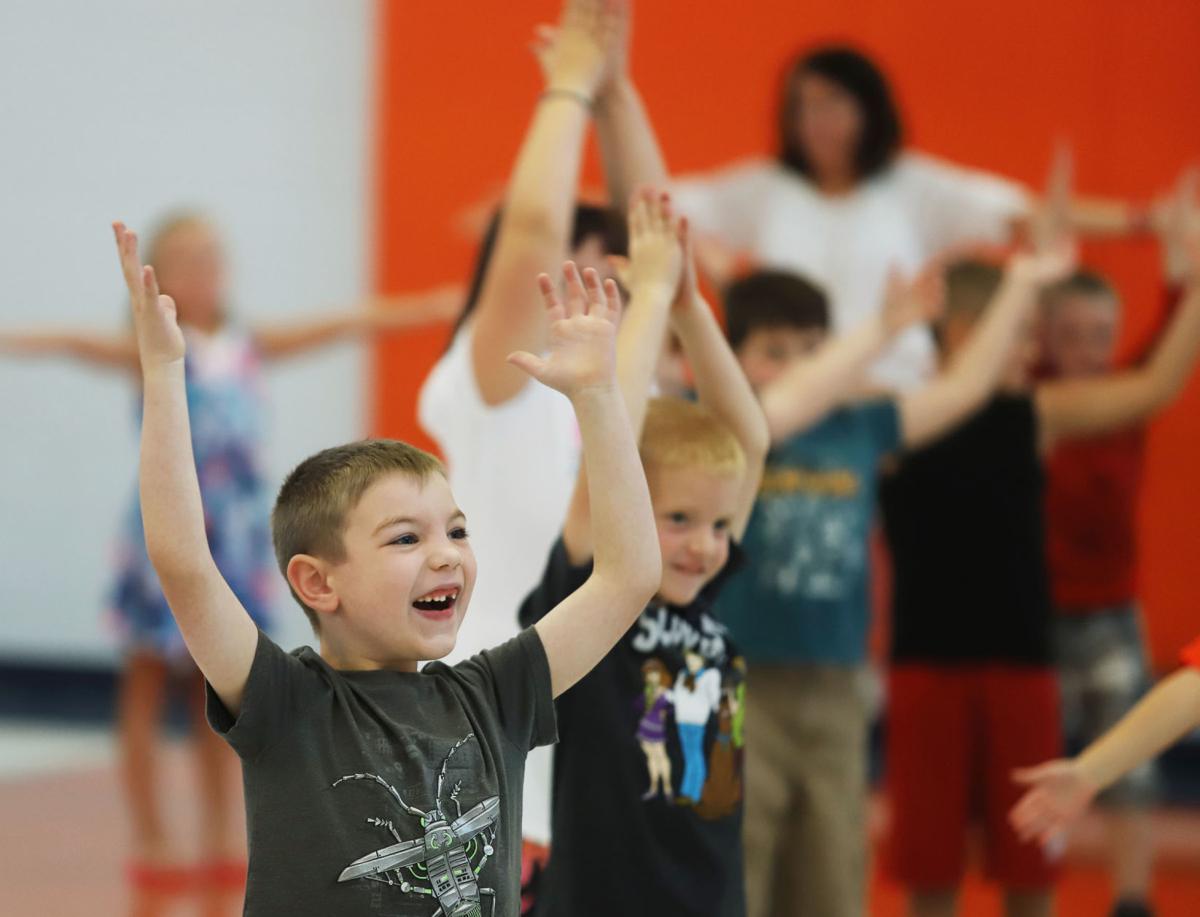 Jaxson Davis, front, and other first graders follow along as professional choreographer Jennifer Toney teaches them how to do “the superhero dance” during one of her presentations at Argenta-Oreana Elementary School Thursday. Online gallery at herald-review.com/gallery

OREANA — Even first thing in the morning, Jennifer Toney's energy and enthusiasm are infectious.

Classes began for the district on Wednesday, and while some of the littlest students are still figuring out how to “do” kindergarten, starting off the year with Toney's sessions seemed a good idea to Principal Amanda Ryder.

“She came last year for the first-graders at the end of the year and the kids absolutely loved it,” Ryder said. “Her energy and her passion for it was very empowering for them, so we thought the beginning of the school year would be a great time for her to see all of our students. At the beginning, we're always talking about the expectations for the year and setting the tone, and we thought this would be a different avenue for doing that, empowering our students and at the same time, making them feel they can carry out our expectations.”

The theme for the year, Ryder said, is “Be a hero,” and the school's official hashtag for that is #differencemaker. That theme is why Toney chose a song with the chorus “I'm a superhero” to accompany her dance routine. As kids filed out of the gym after the session, she high-fived each one and told them to “have a great year.”

Toney is a professional choreographer who travels the country working with show choirs. Her interest in singing and dancing was sparked when she was the same age as those kindergartners and her mother enrolled her in the Decatur Park District's B.O.S.S. (Best of Summer Stock) program. She went on to be in Young Park Singers, Park Singers, productions at MacArthur High School when she was a student there, and then studied dance at Millikin University.

At the time, Toney had no idea dance would become her career, she said. But she did know from the beginning that it would be an important part of her life.

“I am super passionate about performing arts. I love it,” Toney said. “If there's anything that I can do to get them up and going and having fun, I just love that. I love the kids' energy. OK, we have 20 minutes together and we have to get everything we can out of these 20 minutes. I have to be at 100 so they can join me as quickly as possible.”

She said that one day she realized that she spends all her time professionally working with students, but hadn't spent any time working with her own cherished goddaughters, both of whom attend Argenta-Oreana. She visited the school last year, too, but only to lead one class through a routine. This year, she spent the whole day so she could teach all the grades.

“I was happy,” said 5-year-old Griffin Hale. “I always wanted to dance.”

Learn to win: Argenta-Oreana coach teaches the class he wishes he'd had

ARGENTA — Dustin Krause's classroom is so full for his twice-weekly “Learn to Win” class that there aren't enough desks to go around. Some stu…

OREANA — When Kelson Reed saw the “Warriors” book, one of a series by Erin Hunter, he didn't think he'd like it, but was intrigued enough to p…

Finding college not for them, some Decatur students turn to trades

MOUNT ZION — The gym at Mount Zion Grade School was filled recently with second-graders jumping rope “for people with special hearts,” as 7-ye…

Tests revealed no traces of lead in water fountains at Argenta-Oreana schools after the district undertook replacements and repairs, the distr…

DECATUR — School districts in Illinois will receive more than $22,000 in grants through the Illinois Secretary of State's School Library Grant…

Sales tax has Argenta-Oreana on track with school upgrades

ARGENTA — Argenta-Oreana High School Principal Sean German remembers discussions about needed upgrades to the campus when he arrived in 1997.

ARGENTA — Argenta-Oreana High School has an award-winning principal, but Sean German eagerly shares credit with the people he shares the schoo…

Hot weather not a bother for upgraded Argenta-Oreana schools 🏫

ARGENTA — Monday was the first time a hot day did not mean early dismissal at Argenta-Oreana schools.

Music to celebrate the season

DECATUR — All of the Millikin-Decatur Symphony Orchestra concerts are specially designed for the audience. The Labor Day Pops Concert was desi…

ARTHUR — Every great artist needs a muse, and Brenda Vowell found hers in the shape of a bug-eyed pooch named Mooky.

ARGENTA – Amanda Spinner studied agriculture in college before she knew she wanted to teach.

DECATUR — Being on your own for the first time can be intimidating, and without the right information, making mistakes is easy.

ARGENTA — Choir directors at a high school concert don't often sing a solo, but Rae Ann DeSutter is not just any choir director.

Professional choreographer Jennifer Toney teaches kindergartners a dance during one of her presentations at Argenta-Oreana Elementary School Thursday. Online gallery at herald-review.com/gallery

Jaxson Davis, front, and other first graders follow along as professional choreographer Jennifer Toney teaches them how to do “the superhero dance” during one of her presentations at Argenta-Oreana Elementary School Thursday. Online gallery at herald-review.com/gallery