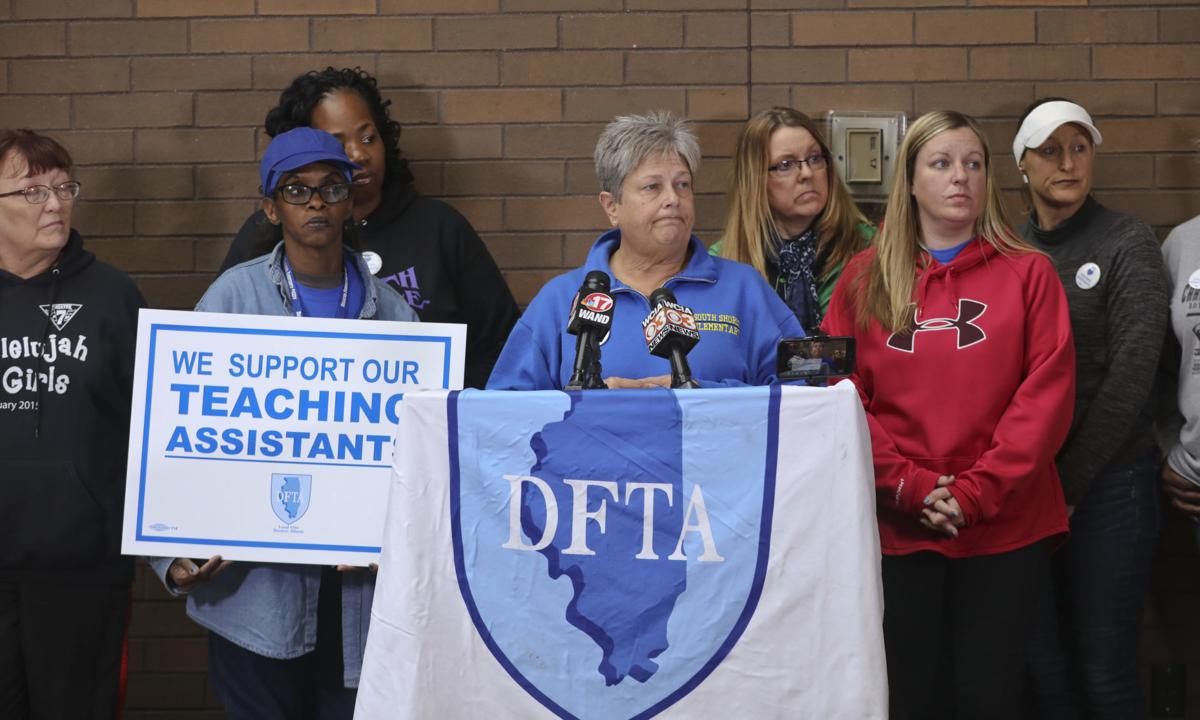 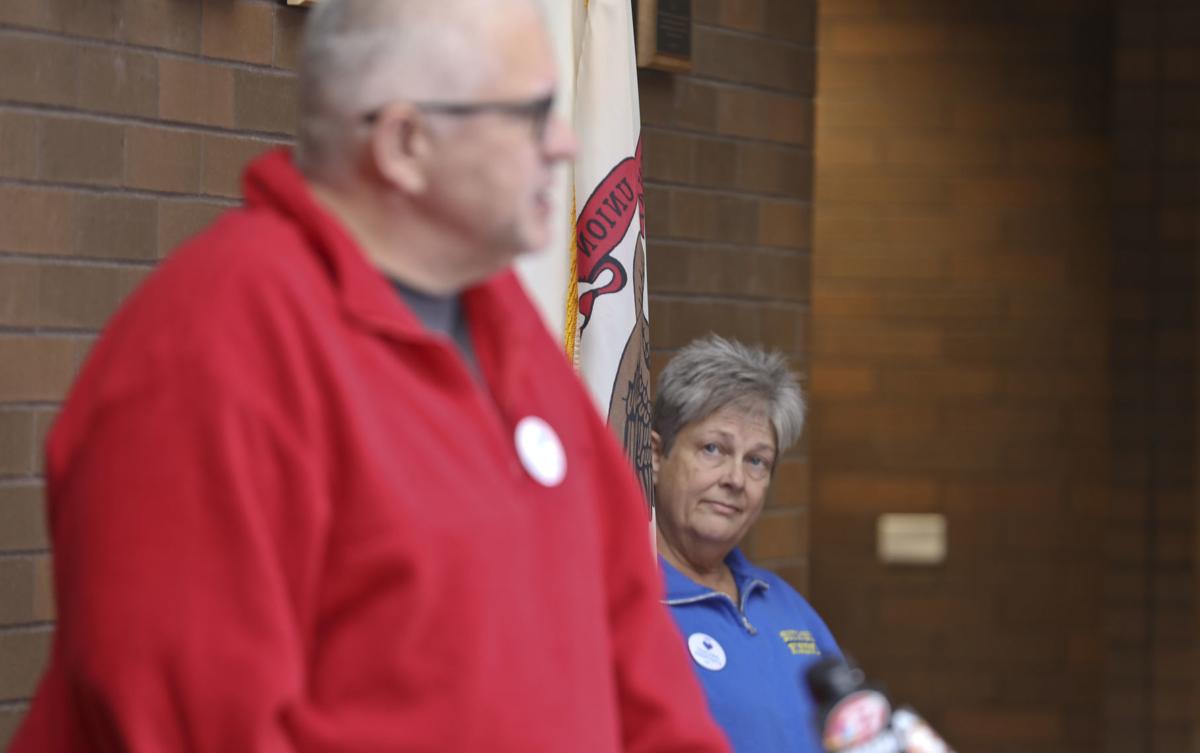 Paula Busboom, right, looks on as Jon Nadler, field service director for the Illinois Federation of Teachers, speaks during a press conference at the Decatur Civic Center. 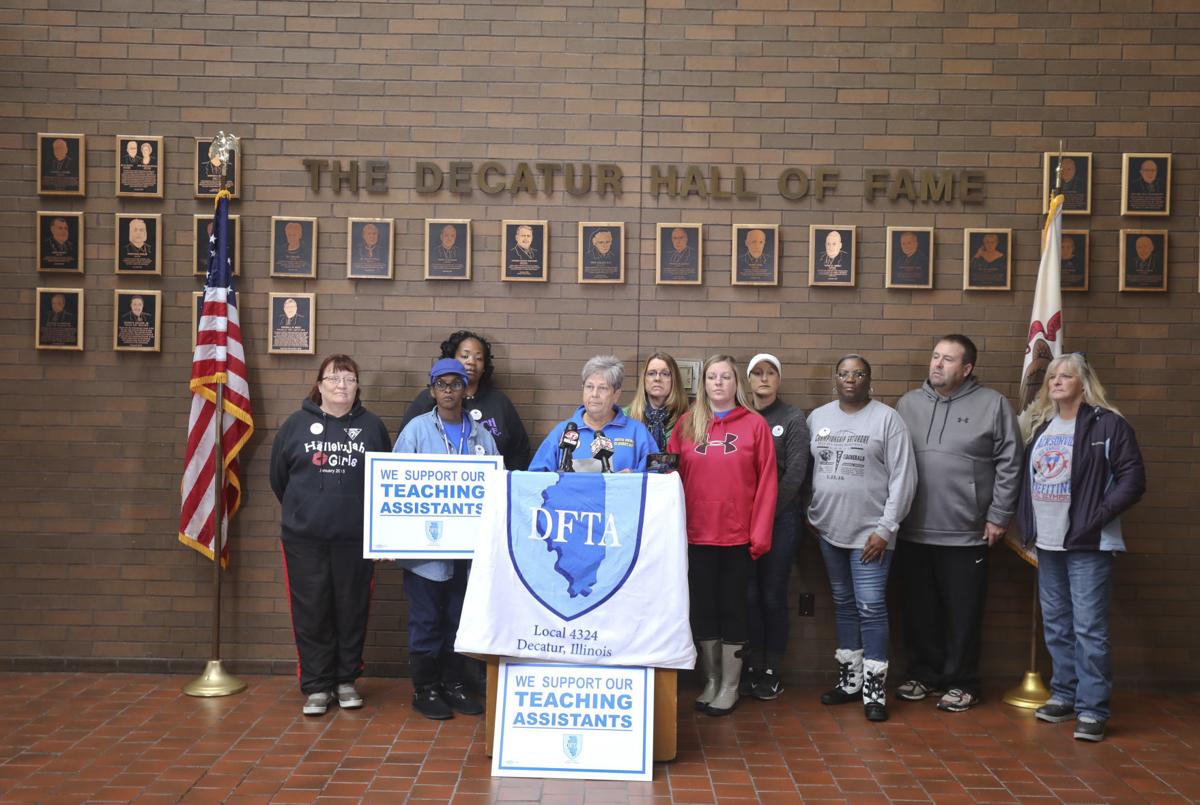 Paula Busboom, center, speaks at a press conference for the Decatur Federation of Teaching Assistants on Oct. 31, 2019.

DECATUR — Teaching assistants will be back in Decatur classrooms today after three days of striking, though a contract agreement has not yet been reached with the school district.

Union members, who are striking over what they say are unfair health insurance cost increases proposed by Decatur Public Schools, said they were suspending the strike and returning to work "so that Decatur students can get the education they deserve." But they also said the district had informed the striking employees that their health insurance would be canceled, and they would have to pay the full cost of coverage while they were not working.

"It’s fitting that on Halloween, they pull this trick," union President Paula Busboom said in a statement. "They’re trying to hit us where it hurts and take away exactly what we’re fighting to keep." Speaking at a press conference later Thursday afternoon, Busboom added that district leaders had "weaponized health insurance as a means to bust the union and make an example of school workers everywhere."

The teaching assistants, who have been negotiating with the district since April, say the district's health insurance proposal is too expensive for them, particularly those with family coverage. District leaders have said they're offering reasonable benefits, including the option of a high-deductible plan with lower monthly premiums. They accused union leadership of failing to communicate details to members.

The union represents 275 hearing interpreters, licensed practical nurses, hearing-vision technicians and teaching assistants. Because of the strike, more than 500 special education and prekindergarten students whose programs rely heavily on teaching assistants have been kept out of class.

Busboom said teaching assistants will be working without a contract when they return. She said the union has notified the federal mediator handling the negotiations of members' desire to return to the table, but the district has not yet responded.

Denise Swarthout, the district's chief communications officer, said the district will work with the mediator to pursue appropriate next steps, but a date and time for negotiations has not yet been announced.

The district had announced before the strike started that teaching assistants would lose their health coverage if they were not working. During a press conference Monday morning, board member Regan Lewis said those employees would be able to keep getting benefits if they pay all of the costs under COBRA.

But Jon Nadler, field service director for the Illinois Federation of Teachers, said the union heard Wednesday evening the insurance coverage would stop after a union member called Blue Cross and Blue Shield of Illinois, which confirmed the insurance would be dropped.

"There's always rumors of it dropping," he said. "It's quite possible that those rumors follow through and this is one of them."

Busboom said the cost of keeping that coverage would be exorbitant.

Both sides have pointed to health insurance costs as the major sticking point in the negotiations. The district is offering two plans: the current level of coverage, known as the "gold" plan, and a new high-deductible "silver" plan. The union says the monthly premium cost increases under the gold plan are too high, and the silver plan is "not feasible" for members because of the high deductible.

Teachers currently pay $900 annually for single employee coverage and $3,300 for family coverage. The money is paid over 18 pay periods, or the nine months of the year that teaching assistants work.

Under the silver plan, the district would cover all of a single employee's monthly premiums and 85% of the premium for the other categories of coverage. Costs would be roughly $2,300 to $2,400 for an employee with spouse or with children. Those with family coverage would pay $3,864 over the course of the year.

Nadler has said the district would need to lower the rate of increase to monthly premiums under the gold plan in order to end the strike. Because teaching assistants pay for their full year of coverage over the nine months they are working, union members with family coverage would have to pay $906 monthly under the district's plan, he said. Currently, they make nine monthly payments of $366.

Previously, the union said it was told that all seven school board members voted not to offer any changes in health insurance premiums during the most recent mediation session Oct. 23. On Thursday, Busboom said members are hopeful that the school board would allow the district's negotiating team to "have some leverage and actually get to the table and bargain in good faith."

Union leaders also said they have filed a charge with a regulatory body accusing the district of unfair labor practices. Nadler cited what he described as "unprofessional and illegal" comments at the district's Monday press conference, when school board President Beth Nolan said union members had voted for the strike based on "lies and misinformation" from Busboom. "The only vote they should have taken is a vote for new leadership," she said.

Busboom said the suspension does not mean the union will give up on its stance on healthcare.

"We can walk out again," Busboom said. "This is not over. Like I said before, this is just the beginning."

FROM THE ARCHIVES: Recognize these photos of Decatur High School?

The hallways of Decatur High School. We looked through our archives for photos. Here's what we found. Let's go inside.

School district leaders said Friday they were working to restore health insurance benefits for teaching assistants who lacked coverage despite returning to work after three days of a strike.

DECATUR — The union that represents Decatur teaching assistants on Saturday said the school board had removed their life insurance benefits.

Now back in class after their three-day strike but working with no bargaining session scheduled, the mood of the 275-strong Decatur Federation of Teaching Assistants was defiant and determined Tuesday night.

Democratic presidential candidate Bernie Sanders showed his support on Twitter on Thursday for Decatur teaching assistants in their dispute with the school district over health insurance.

District officials and leaders of the Decatur Federation of Teaching Assistants are meeting again later this month.

Paula Busboom, right, looks on as Jon Nadler, field service director for the Illinois Federation of Teachers, speaks during a press conference at the Decatur Civic Center.

Paula Busboom, center, speaks at a press conference for the Decatur Federation of Teaching Assistants on Oct. 31, 2019.