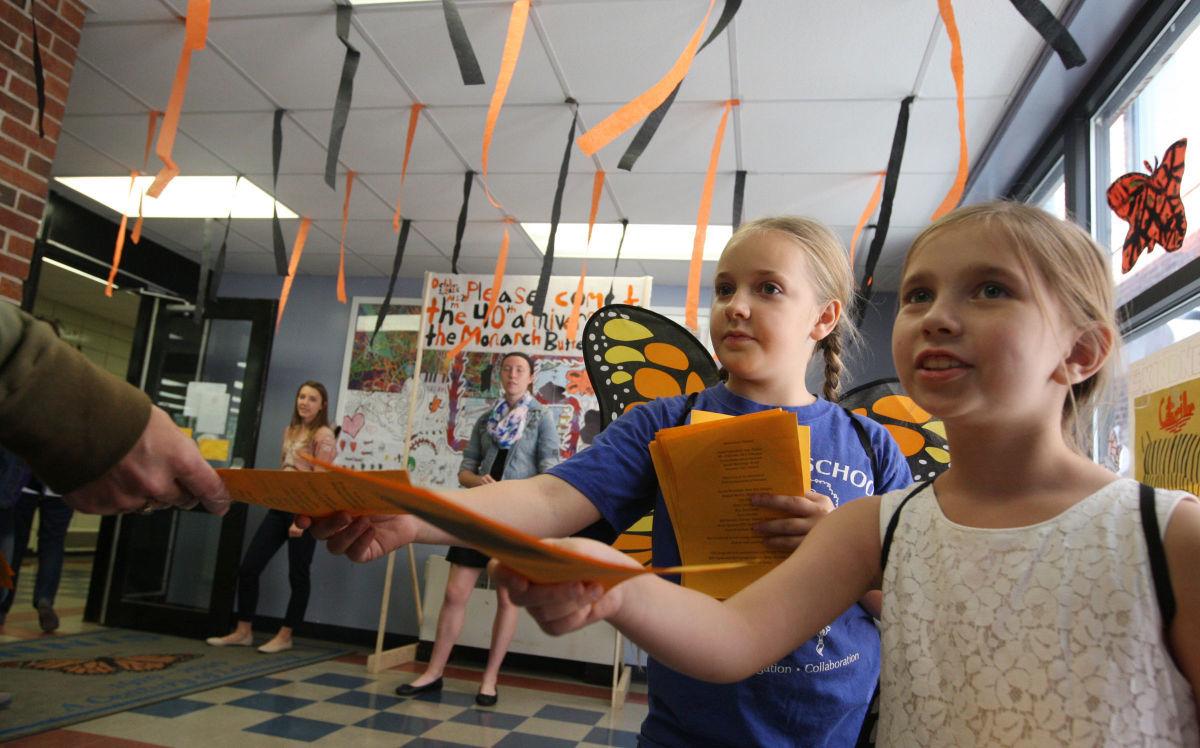 Charlotte Bramer, middle and Ashley Nalley, right, wear butterfly wings while handing out programs for the Dennis School 40th Anniversary and Landmark Dedication Celebration of the Monarch Butterfly at the school. 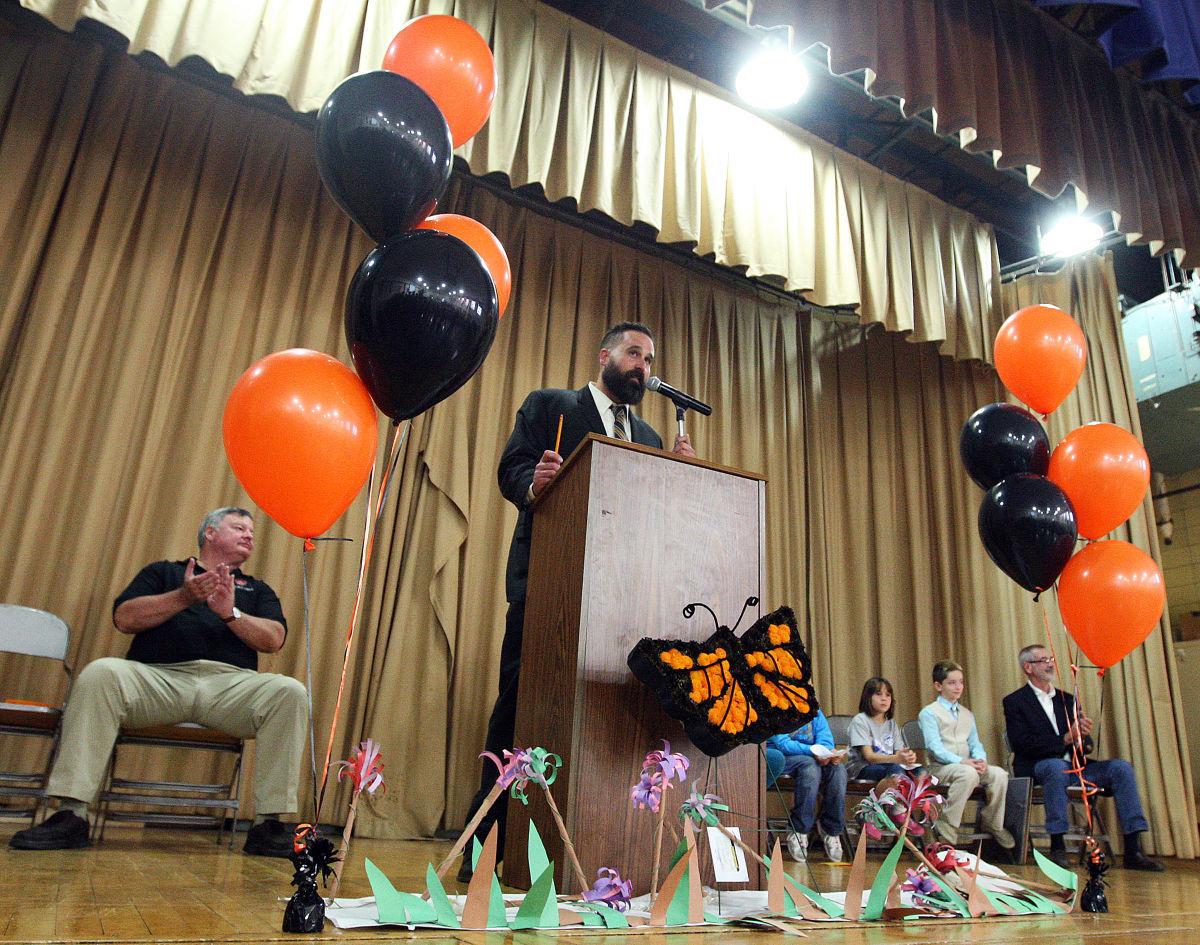 Principal Matt Andrews thanks all those involved in the celebration. 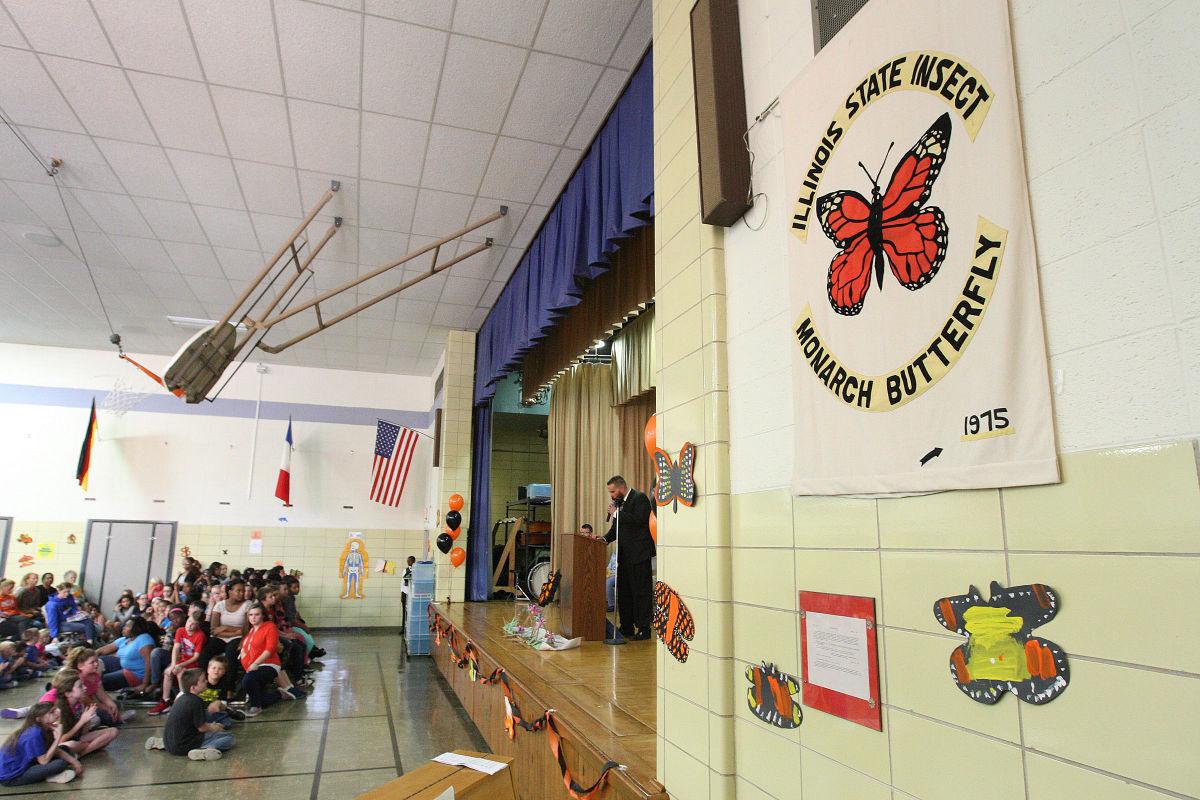 Pictures of butterflies were posted in the Dennis School gym to celebrate and commemorate the 40th anniversary of a bill proposed by Dennis School third-graders that made the monarch butterfly the official state insect. 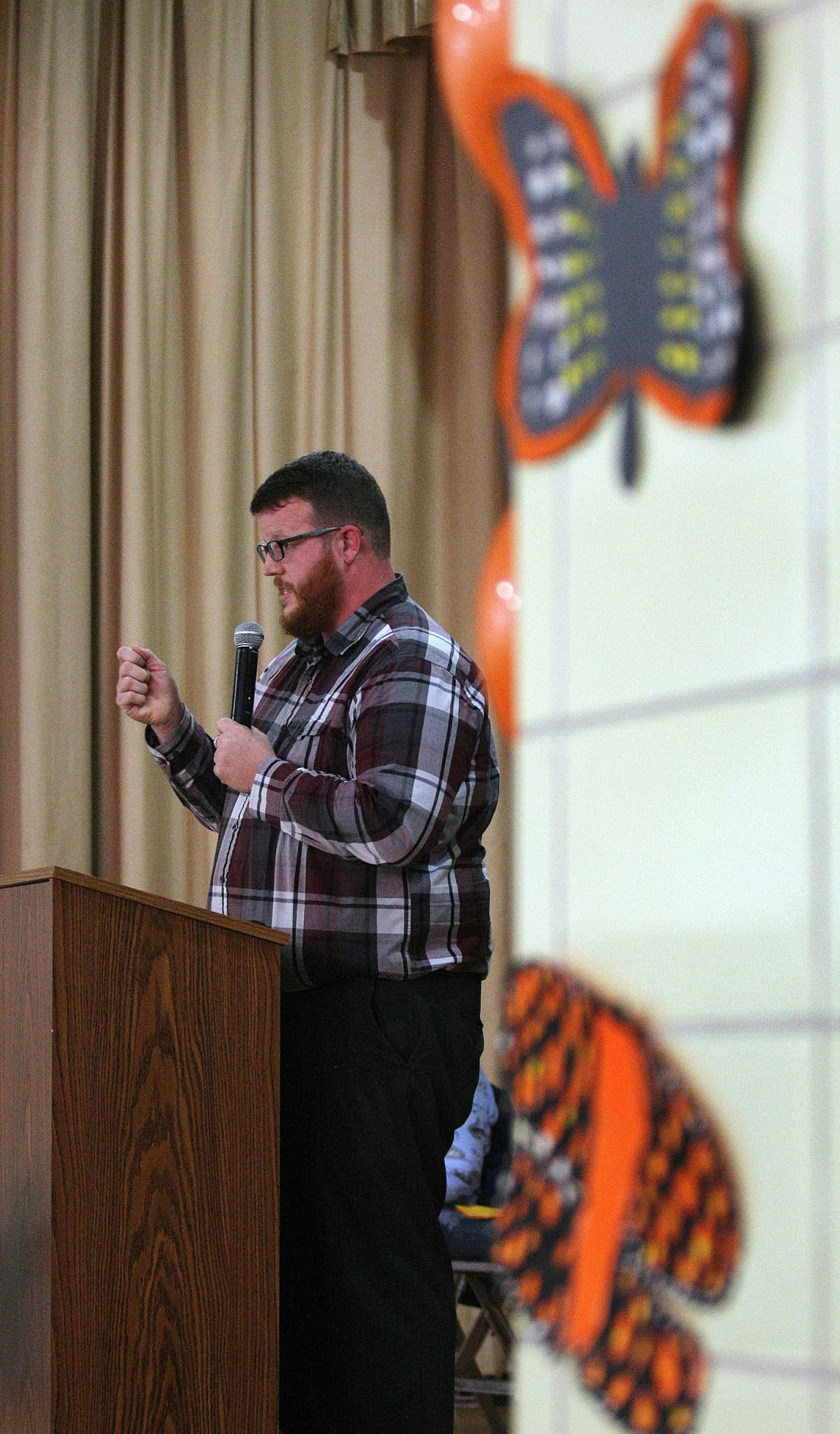 DECATUR – Thursday was the 40th anniversary of the day that Gov. Dan Walker signed into law the bill proposed by Dennis School third-graders, that the monarch should be the state insect.

Now that day has even more significance at Dennis, because this year the monarch sculpture on the outside of the building was dedicated as a city landmark, again thanks to persistent students at the school.

“These students proved the power of persistence to change history,” said Principal Matt Andrews at the assembly to mark the occasion. “Please continue to strive to be awesome in everything you do.”

He took a moment to remember the late Bill Cogan, who was the longest-serving principal at Dennis School and who was principal when the monarch was named state insect. Cogan passed away Sept. 8.

Beginning during the last school year, third-graders at Dennis petitioned every entity that would have to grant permission. They began with the Decatur school board, then went to the city council and the Historical and Architectural Sites Commission. A member of that commission, Hank Norris, attended the celebration Thursday to present the school with a framed copy of the ordinance granting landmark status to the monument.

“I'm knocked out and impressed (by the students),” he said.

The monument was designed and installed by the late Larry Wetherholt and his son, Steve, in 1986. Since then, it had deteriorated somewhat, and artist Jacob Manning restored it over 150 hours of painstaking hand work. He, too, attended the ceremony.

“I put a lot of time and sweat, and a little blood when I hit my fingers with a hammer, into it,” Manning said. “It was an honor putting it back the way it was, and I was very proud to do so.”

True to the lab school concept and the focus on project-based learning at Dennis, the children themselves planned the ceremony, including a captivating movie shot from a monarch's point of view, as the butterfly searches for flowers on the school grounds.

“I'm proud of the hard work that's gone into this,” Superintendent Lisa Taylor said. “I know it took a lot time planning, organizing and researching, and those are skills you can use for a lifetime.”

The proposal to make the monarch the state insect was the first time children had ever proposed a bill to the Illinois legislature that became law, and the success of the third-grade class of 1974-75 gave the students last year the courage to go after the landmark status.

City Councilman Jerry Dawson said he was proud to have had a hand in the project, by voting in favor of the proposal to make the monument and landmark, and that Mayor Julie Moore-Wolfe, who couldn't attend Thursday, had asked him to convey her congratulations to the students.

“Our emotions are overflowing with excitement,” said teacher Linda Burnham, one of the teachers whose students worked on the project. “This moment today goes beyond the excitement of the butterfly monument becoming a landmark. It stands for the success and empowerment of our children. It's about our children's dreams coming true and children making a difference in the community.”

DECATUR – Students at Dennis School are already very comfortable with technology, but this year each student will have a device of his or her …

DECATUR – Six-year-old Katie Ellison got up close and personal Sunday with a winged summer visitor who might not be there when she grows up.

Proposal to discard state symbols not popular with Dennis kids

DECATUR — On the day William Barnes died, he sat near the small waterfall, 262 varieties of flowers and 93 types of shrubs in the butterfly ga…

DECATUR – What do you do on the last day before winter break?

Charlotte Bramer, middle and Ashley Nalley, right, wear butterfly wings while handing out programs for the Dennis School 40th Anniversary and Landmark Dedication Celebration of the Monarch Butterfly at the school.

Principal Matt Andrews thanks all those involved in the celebration.

Pictures of butterflies were posted in the Dennis School gym to celebrate and commemorate the 40th anniversary of a bill proposed by Dennis School third-graders that made the monarch butterfly the official state insect.