Bears vs. Rams: Latest scores and updates from MNF

DECATUR — More school districts from downstate Illinois have joined a lawsuit against Gov. Bruce Rauner and the state, saying the current education funding system violates the rights of students and districts.

The lawsuit, originally filed in St. Clair County in April 2017 and amended Monday to add more districts, said state lawmakers have failed to allocate enough money to meet "adequacy targets" for school funding that were determined by the new evidence-based funding model lawmakers approved in August. Twenty-two districts are taking part, including Pana and Taylorville.

The lawsuit calls for an additional $7.2 billion of funding to reach adequacy levels, but says the state has only allocated $350 million.

“We had a victory last year, but we need to continue down this path,” Pana Superintendent Jason Bauer said Wednesday. “We need to apply some pressure for kids to get the education they need.” 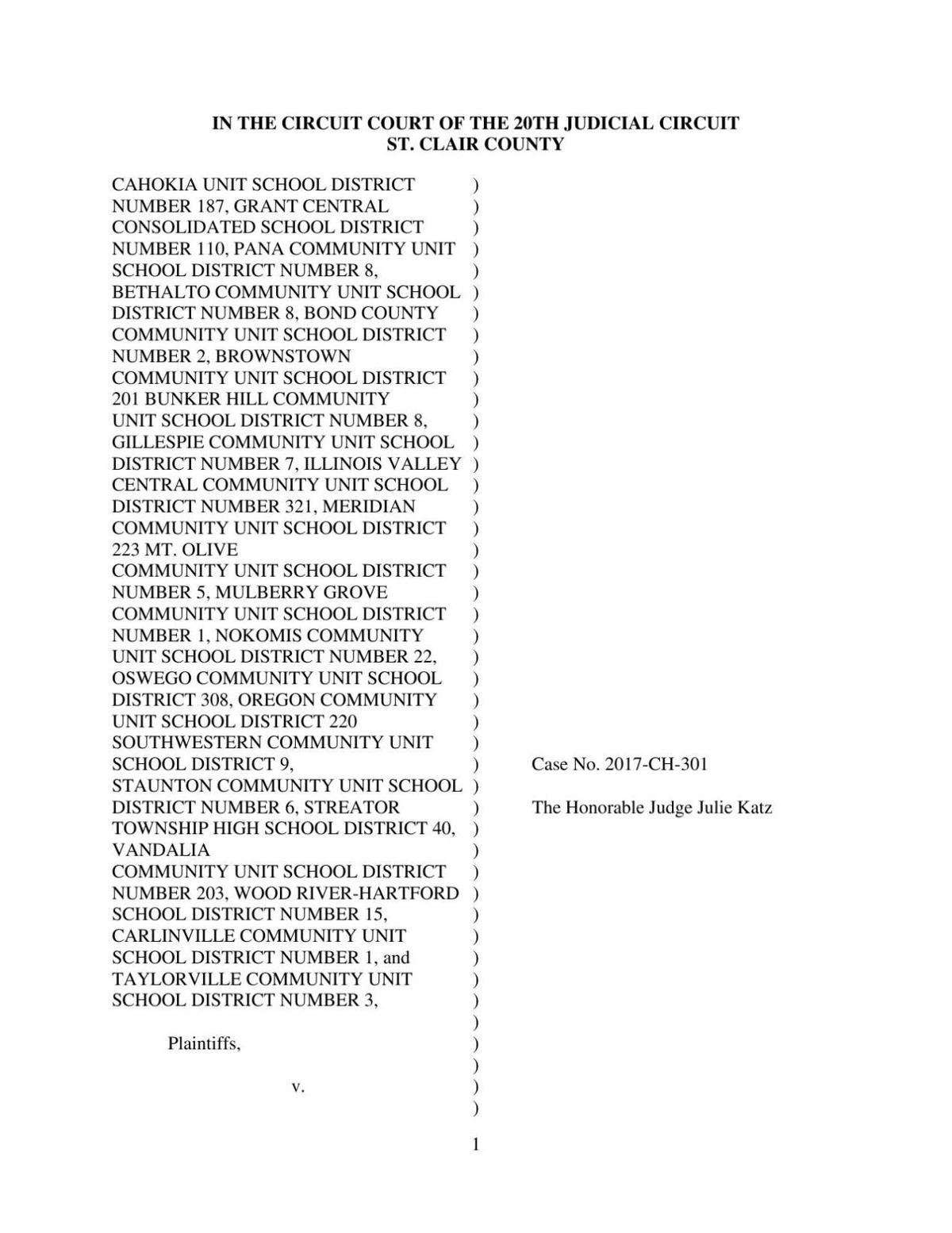 In the amended complaint filed Monday, the school districts call the “present inequities in the financing of public education” shocking. They also allege that the current system violates the rights guaranteed in the Illinois Constitution to the school districts and their students.

The lawsuit is consistent with the position of the Illinois State Board of Education, which has said $7.2 billion more would be needed to meet the goal of 100 percent funding to adequate levels. The board files its budget request annually in February.

“The final percent of adequacy is the resources a district has compared to what the state statute says it needs,” ISBE spokeswoman Jackie Matthews said Wednesday. “So there are two parts to the calculation. (The first part is) what a district has, which is current state funding and what they could reasonably raise locally through property tax, compared to what the district needs according to the statute."

Each district's adequacy level is unique, based on demographics such as how many students there are, how many are English learners or low income, she said. Cost of living in the area is also a factor.

Once that target is determined, Matthews said, the percentage difference between district's own resources and the target determines how much new funding the district requires to meet the target. Districts are also assigned a tier designation of 1 through 4, with 1 being the biggest gap. Those districts receive the most proportion of the new funding.

No district will receive less funding than in the past, but wealthier districts already at 100 percent of “adequacy” or better will not receive significant new funds, she said.

While Decatur Public Schools are not among those suing the state, officials say they're also set to receive less money than they need for adequate funding.

Decatur schools generate 62 percent of the target amount for adequacy, said Todd Covault, chief operational officer for the Decatur School District, meaning the new funding formula should provide the district with the remaining 38 percent. That would amount to $43 million, he said.

“There are a lot of things the district would be able to do with an additional $43 million: pay our teachers more competitively, provide gifted programming to students, providing after-school enrichment activities,” he said.

Decatur was slated to receive an additional $2.3 million under the new formula, which was announced in April. Covault said at the time that had already estimated into the district's budget.

Bauer, of Pana, said the lawsuit was amended Monday in St. Clair County to put additional and continued pressure on the Illinois General Assembly. The districts claim in the lawsuit that the state requires them to to meet high standards of education but does not provide the funding for schools to actually do so.

“Our goal is to continue to apply pressure on the General Assembly to fund public education that will allow us under the new evidence model to educate our students in a way that they can all have success," Bauer said.

The lawsuit is set for a status conference in July, according to court records. The current legislative session ends May 31.

Read the lawsuit filed by 22 Illinois school districts with this story at herald-review.com.

DECATUR — The Decatur School District will be getting an additional $2.3 million under the state's new evidence-based funding formula for publ…

SPRINGFIELD, Ill. — The state's education chief says that the $350 million boost promised to public schools this year will be distributed begi…

SPRINGFIELD — A proposed bill would give more than 90,000 students across 100 districts in rural Illinois access to high-speed internet.

Manar's support of bill a betrayal

State Senator Andy Manar, many of us are extremely disappointed and offended in your voting for SB 1696, the Muslim Advisory Council bill. Thi…

DECATUR — Social service agencies in Macon County have banded together to target the mistreatment of children, a pervasive issue they say need…

SPRINGFIELD — A deer ran in front of a motorcyclist Monday night causing a fatal crash, according to Illinois State Police.

DECATUR — The remnants of Subtropical Storm Alberto are expected to be felt in Central Illinois today, continuing a whip-lash weather pattern …

DECATUR — As child abuse cases increase in Macon County, one organization dedicated to the problem needed more employees and more space. The M…

DECATUR – Decatur schools received $1.7 million in additional funding from the state this year under the new education funding formula enacted…