A recount of the Macon County sheriff's race starts tomorrow. Here's what to expect.

Masks and screening for coronavirus symptoms will be part of life in Illinois schools this fall as students return for in-person instruction as much as possible.

But even with an emphasis on returning students to the classroom, schools are being advised to prepare for a return to remote learning if there are signs COVID-19 is again surging in the state.

The Illinois Federation of Teachers and the Illinois Education Association also issued a joint statement saying the guidelines don't sufficiently address concerns about social distancing and lack of protective equipment.

Gov. J.B. Pritzker on Tuesday outlined guidance for schools resuming operations in the fall, particularly K-12 schools, where the emphasis will be on once again bringing students into the same space as their teachers.

"Classroom learning provides necessary opportunities for our students to learn, socialize and grow," Pritzker said. "The benefits of in-person instruction cannot be overstated."

The Illinois State Board of Education developed guidelines for all of the 852 school districts in Illinois to follow. At the same time, though, each school district will be responsible for developing its own plan to adapt those guidelines to the district.

State school Superintendent Carmen Ayala said the plan to have local districts develop their own plans for implementing the guidelines reflects the state's great diversity. 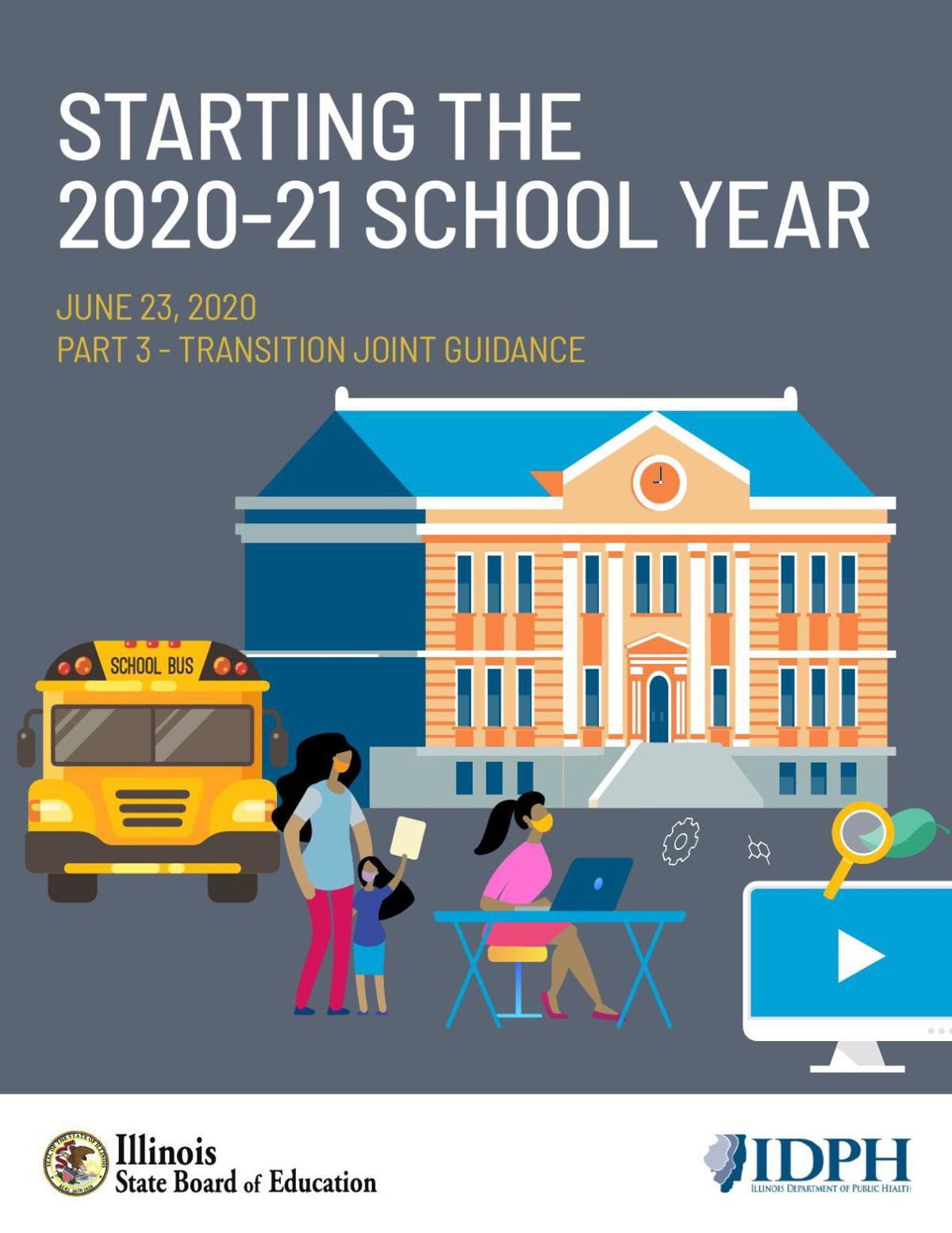 "The guidance released today acknowledges that a one size fits all approach to the reopening of schools doesn't consider the context school community," said Tom Bertrand, executive director of the Illinois Association of School Boards. "School districts need flexibility to make decisions based upon the sometimes rapidly changing conditions in their communities."

The guidelines include a requirement that all staff and students must wear masks or other face coverings. To that end, Pritzker said the Illinois Emergency Management Agency will provide 2.5 million cloth masks to schools to ensure each student and staff member will have the proper face coverings needed to resume classroom instruction.

"A child's ability to afford or acquire a face covering should have no impact on whether they can go to school," Pritzker said.

The criteria require that social distancing be maintained whenever possible and that a system be set up to conduct symptom screenings and temperature checks or require that people entering a school building attest that they do not have any coronavirus symptoms.

School-wide cleaning and disinfecting will have to be increased. Pritzker said the state has secured purchase agreements for hand sanitizer, personal protective equipment and cleaning supplies that will be available to school districts at a lower cost than they would probably have to pay on the open market.

There is also a ban on more than 50 people gathering in one place. Pritzker said that means in spaces within a school building. He acknowledged that the ban will mean different things for different school districts and could also affect the ability of some kids to get to school.

The joint IEA/IFT statement said overcrowded classrooms, lack of school nurses and scarcity of protective equipment are concerns for the unions.

Illinois public schools and colleges will open this fall despite the COVID-19 pandemic, with help from the the state to provide 2.5 million face coverings to K-12 students to help prevent transmission of the virus, Gov. J.B. Pritzker said Tuesday.

"Successfully incorporating the Illinois State Board of Education's guidelines will depend largely on the labor management relationship and whether or not all the support staff, teachers and stakeholders have a real voice in determining what school looks like in our new normal," the statement said. "We are committed to working with ISBE to help update the guidelines and give better guidance on what to do with crowded classrooms and schools, collective bargaining issues and the lack of critical staff and resources such as school nurses and PPE."

Pritzker emphasized that adjustments could be made over time.

"In the event of a dramatic reversal of local health metrics or a second wave of the virus at some point during the school year, schools in districts must prepare for the potential need to return to remote instruction," he said.

There are no penalties for schools failing to follow the guidelines, but Pritzker said that shouldn't be necessary.

"Everyone has the same interest, which is to protect children."

The state will not review the plans developed by local districts to implement the guidelines. Schools should consult with local health departments if they have questions about what to do, Ayala said.

Schools were ordered to stop in-person instruction in March as the coronavirus began spreading exponentially and officials worried that an unchecked increase in cases would overwhelm health care facilities. Illinois imposed stay at home orders, and nonessential businesses were ordered closed in an effort to control the virus.

Illinois has seen a decrease in the number of new cases and deaths from the virus and has been gradually loosening restrictions on businesses and other activities. Pritzker said the state is ready to enter Phase 4 at the end of this week, which will allow for resumption of indoor dining at restaurants, among other things.

"The good news is, Illinois has seen declining cases and declining fatality totals week after week for the past five consecutive weeks," she said.

On Tuesday, the state reported 601 new confirmed cases and 38 additional deaths. That brought the totals to 137,825 cases and 6,707 deaths. Ezike noted that at its peak, the state saw a daily increase of more than 4,000 cases.

Nearly 1.4 million tests for the virus have been administered. The seven-day positive rate for tests is about 2 percent.

Ezike said the success in curtailing the spread of the virus was due to Illinois residents wearing masks, frequently washing their hands and practicing social distancing.

"I commend every resident of Illinois for thinking of your neighbors across the state during this ongoing battle against COVID-19," Ezike said. "Lives are in your hands, and you have saved so many with your actions."

Ezike said now is a good time for parents to get physicals for their children to return to school in the fall and to update any immunizations that they may have postponed during the worst of the outbreak. She advised adults, too, to get up to date on immunizations and on health screenings such as mammograms and colonoscopies.

What reopens Friday under the 'Restore Illinois' plan

Gov. J.B. Pritzker on Monday released guidelines about what businesses and industries reopen Friday as the state moves into Phase 4 of the Restore Illinois plan.

First round of applications to open for business recovery grants

The Illinois Department of Commerce and Economic Opportunity announced this week that it will soon start releasing funds from two grant programs aimed at helping small businesses that have suffered losses due to the COVID-19 pandemic and civil unrest that occurred during recent protests over racial injustice.

What reopens Friday under the 'Restore Illinois' plan

An Illinois anti-abortion nonprofit filed a federal lawsuit challenging Gov. J.B. Pritzker’s social gathering restrictions, arguing it should be excluded from caps on attendees to charity, planning and educational events.