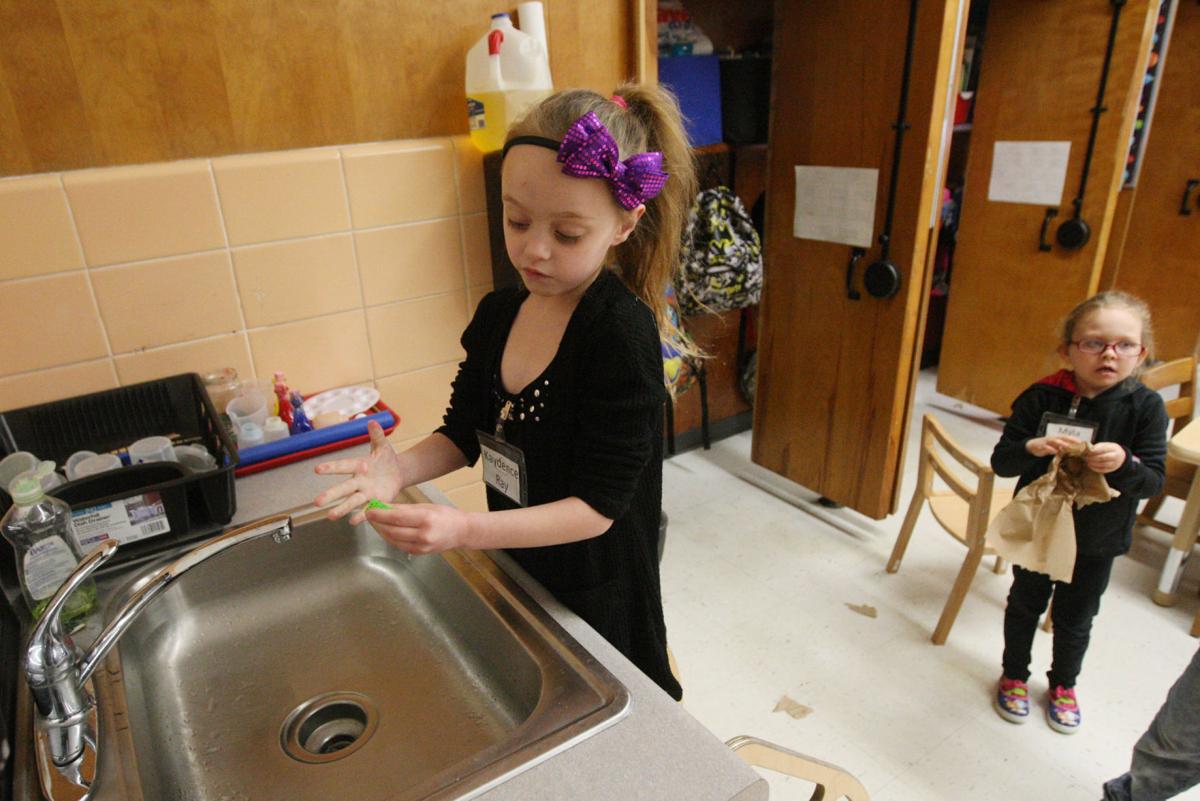 Kaydence Ray, left, and Myla Olaughlin clean their materials in class at Enterprise School Friday. The school was one of the first in the district to use fogging devices with nontoxic cleaning solution to sanitize rooms and help prevent the spread of flu. 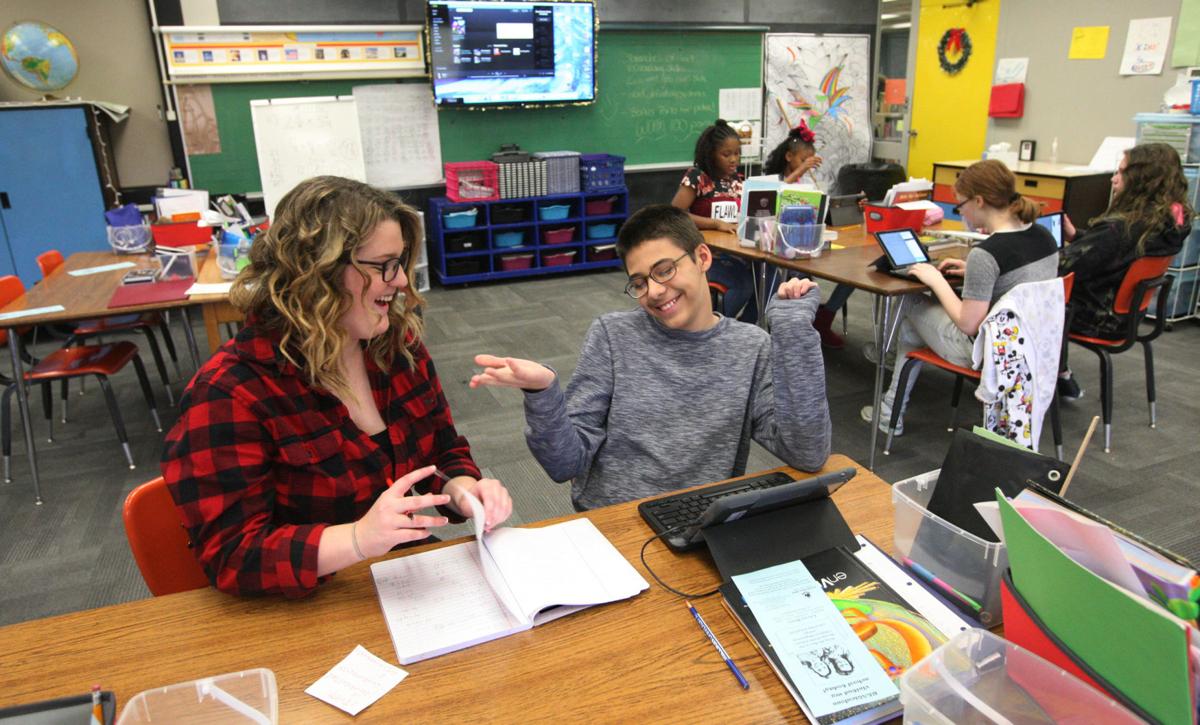 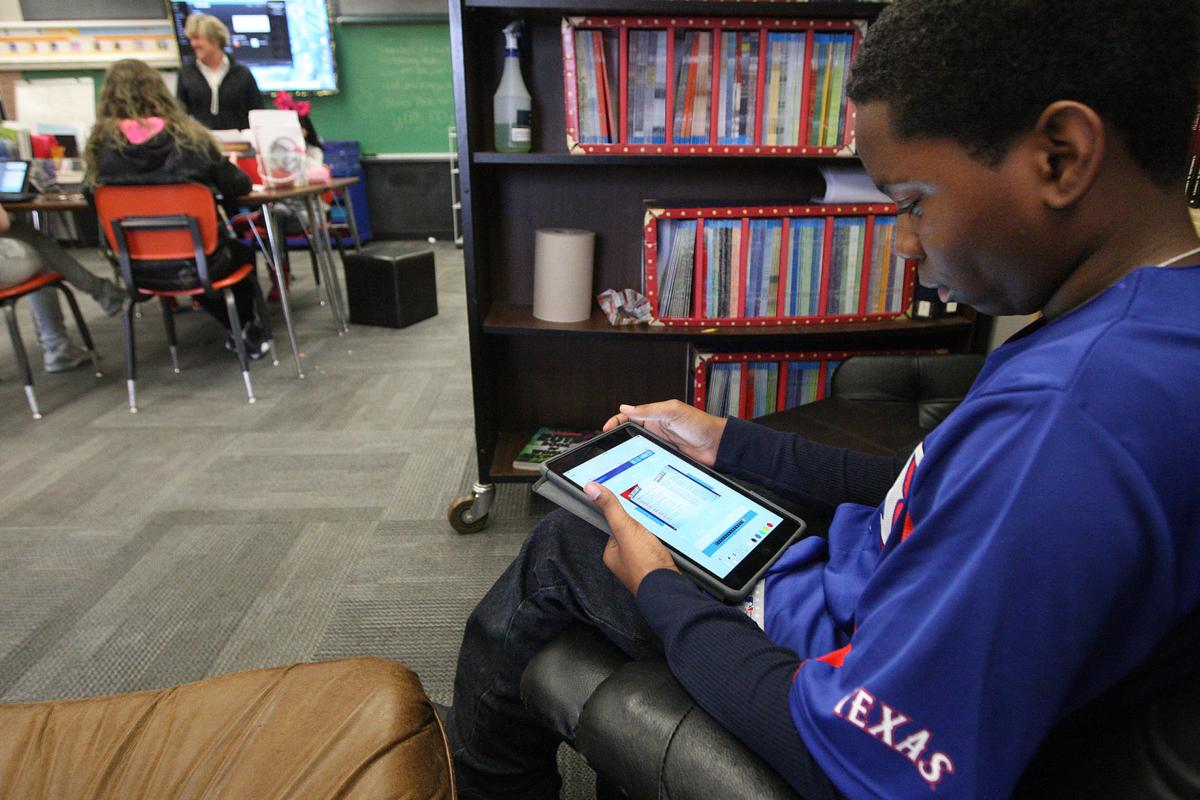 DECATUR — The Decatur School District has adopted a new sanitizing method that cleans classrooms and other areas in record time, which district officials say is crucial as flu season continues.

Shortly before winter break, the district's building and grounds department purchased six "Mist" fogging devices to use at the schools. Developed by GenEon Technologies, the device sprays a nontoxic solution into the air that cleans, sanitizes and disinfects surfaces and hard to reach areas.

"You step into the doorway of the room, fog it, step out, and you're done," said Steve Kline, director of buildings and grounds.

Kline said he first learned of the Mist fogger while attending a seminar with representatives of R.D. McMillen Enterprises, and purchased the devices from the company shortly thereafter. In addition to being nontoxic, Kline said the solution sprayed by the foggers is also odorless and environmentally friendly.

On its website, GenEon says its solutions are created from from minerals, water and electricity using a technology called electrochemical ion activation. Sodium ions are positively charged and chloride ions are negatively charged to create a sanitizer and cleaning compound in one solution.

As for flu cases, she said there haven't been any "alarming" numbers reported at Decatur public schools, but officials are keeping watch. Robertson did not have specific numbers available.

District custodians first started using the Mist devices with the solution while Decatur public schools were closed for winter break, Kline said. Before classes dismissed for the break, a few cases of the flu were reported among some of the district's students and faculty, he said.

Since flu season has shown signs of peaking early in Illinois, Kline said the district's usual winter break sanitizing efforts were helped by the Mist foggers' efficiency and ease-of-use.

"This is something we wanted to get on top of and address within the schools," Kline said, regarding the flu season. "We've started with the grade schools and are working our way up."

Kline said the buildings and grounds crew started using the foggers in the elementary schools first because the younger students are more prone to touch and grab surfaces and items that could be contaminated.

Gradually, custodians will spread the devices among the district's junior high and high schools and will start using them there, too, he said.

While the Mist foggers have helped clean the schools at a faster pace, Kline said they're not a replacement for manual cleaning practices. Custodians will still clean areas like they normally would, he said, but the foggers make it easier to apply a sanitizing solution as opposed to doing it by hand.

"They'll still dust, wipe down and clean the floors," Kline said. "However, when you're going to use the disinfectant, it usually requires spraying and wiping multiple surfaces.

"Being able to use this fogger and spray the room is a significant time-saver."

Parents win lawsuit to allow daughter with leukemia to have medical marijuana administered to her at school. Family, Page C4.

Flu season appears to be peaking early in Decatur and statewide 💉 😷 💊

DECATUR — Had the flu recently? You’ve got a lot of company.

DECATUR — Both Decatur Memorial Hospital ExpressCare locations will extend their hours due to the uptick of flu cases in Central Illinois, hos…

DECATUR — Health professionals have seen an uptick in influenza cases in the last two weeks in Central Illinois and across the country.

Warning: Stifling sneezes can be health hazard in rare cases

LONDON — Tempted to stifle a loud or untimely sneeze? Let it out instead, doctors in England warned Monday based on the very unusual case of a…

SPRINGFIELD — Illinois public health officials are reporting a second case of measles in a person who was at Chicago's O'Hare International Airport.

Kaydence Ray, left, and Myla Olaughlin clean their materials in class at Enterprise School Friday. The school was one of the first in the district to use fogging devices with nontoxic cleaning solution to sanitize rooms and help prevent the spread of flu.