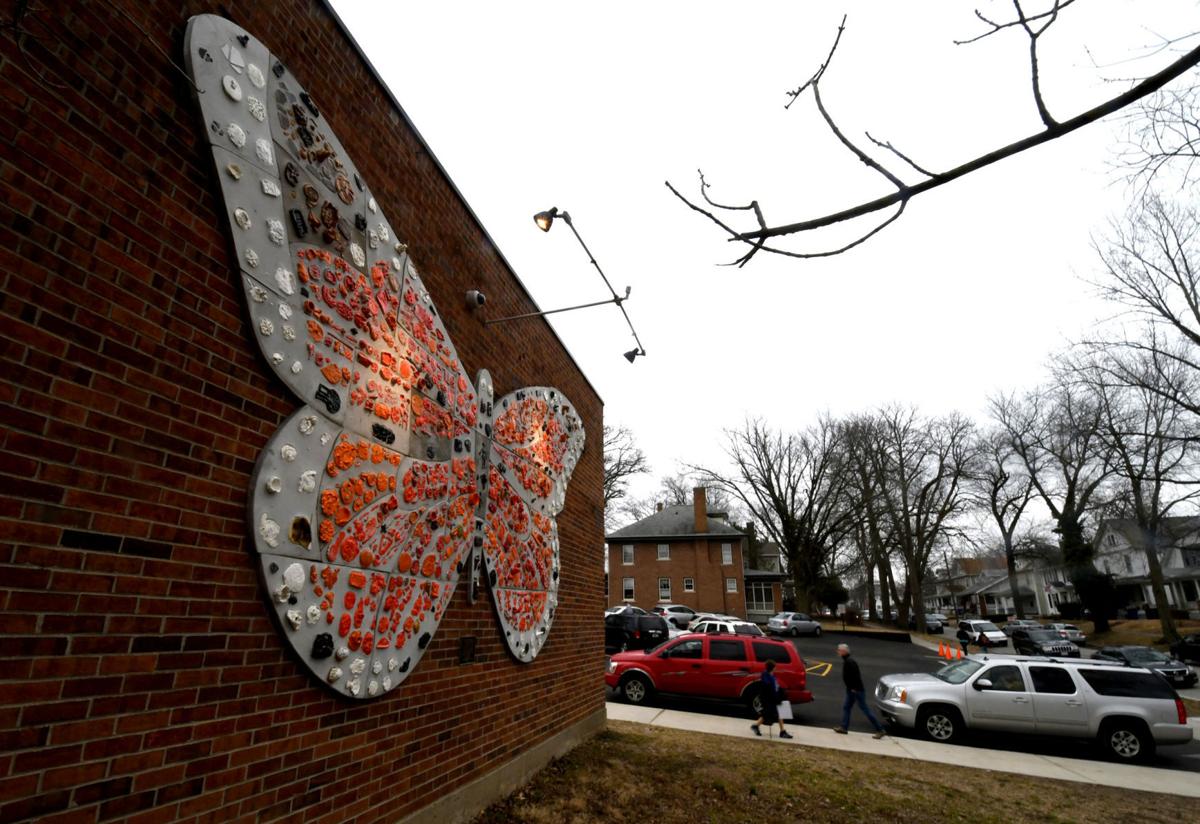 Parents pick up their children at Dennis School, which has a monarch butterfly mosaic. Legislation has been introduced in the Illinois Senate to discard all state symbols. Dennis was instrumental in having the monarch butterfly declared the state insect during the 1974-75 school year. 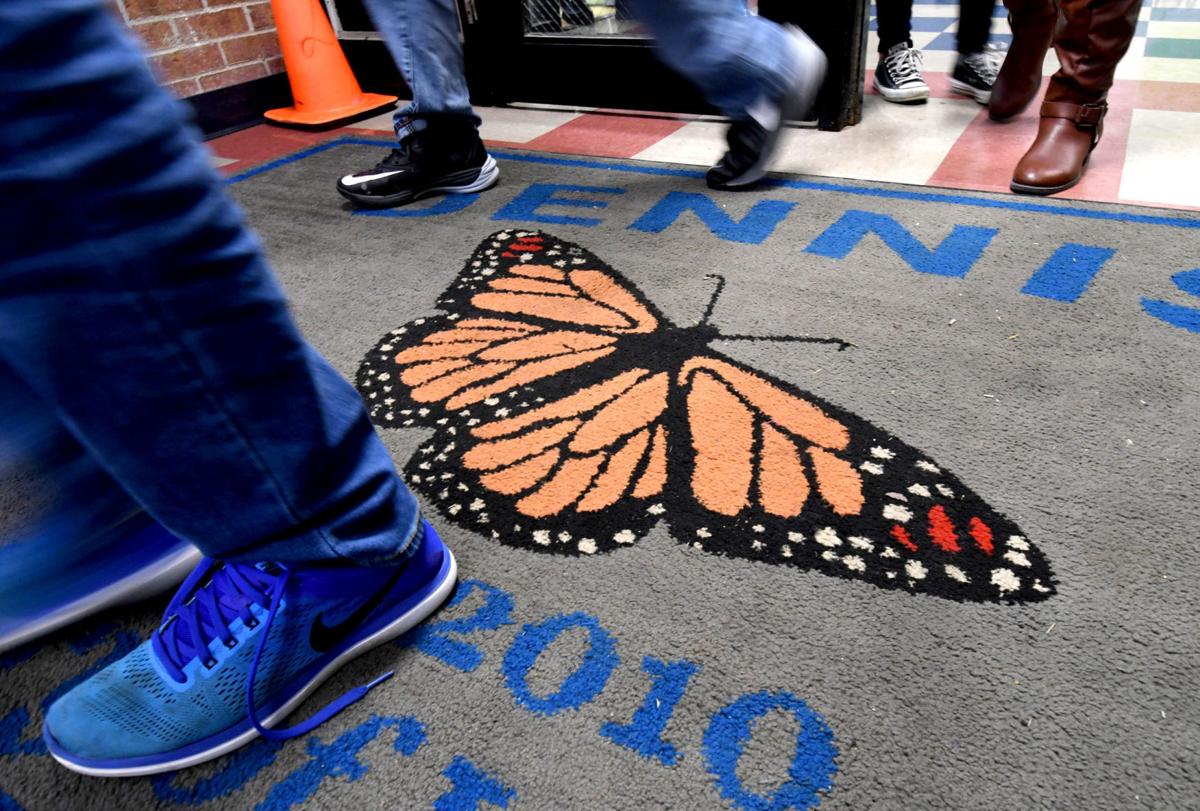 Students leave school at Dennis, where butterfly reminders are ubiquitous. 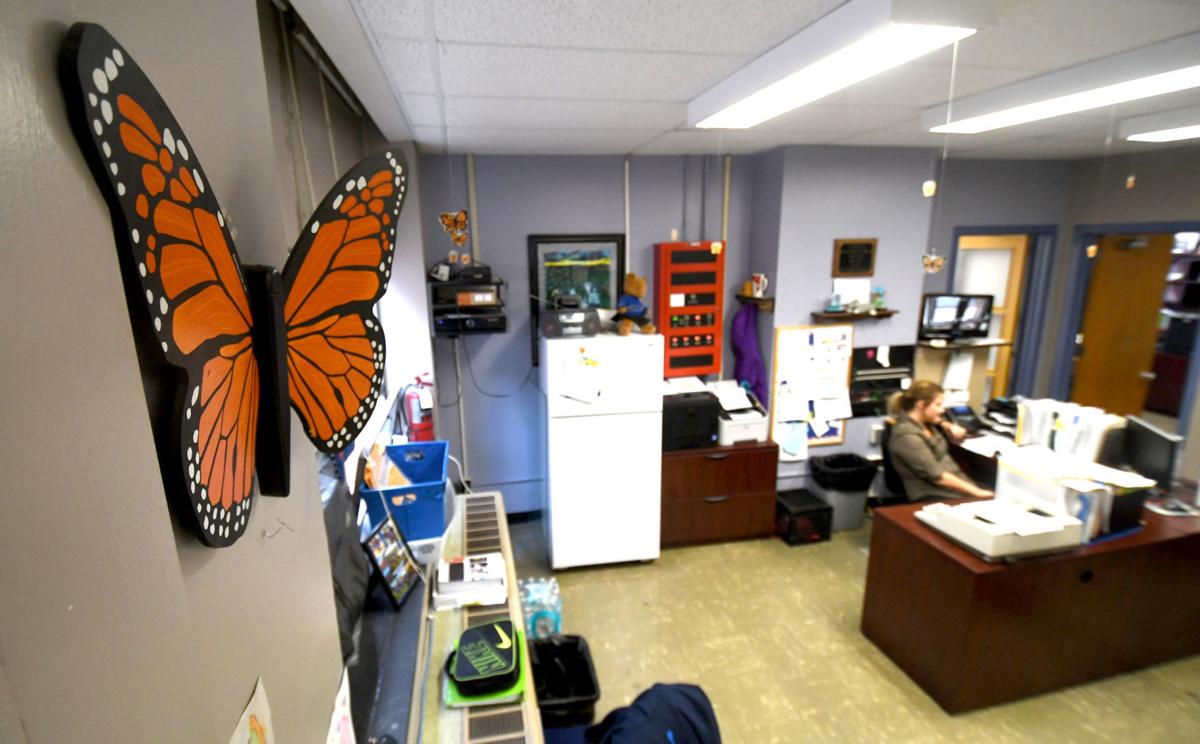 Parents pick up their children Tuesday, February 7, 2017., at the Dennis School on Decatur. Sen. Tom Rooney has introduced a bill to discard all state symbols.

A bill proposed in the Illinois Senate would get rid of state symbols, such as the state bird, flower and state animal, among many others.

Republican state Sen. Tom Rooney of Rolling Meadows proposed the bill. He said too many state symbols has decreased the value of the "important" ones.

Rooney's legislation would only keep the state flag, seal, motto and song.

During the 1974-75 school year, Dennis students mounted an effort to have the monarch declared the state's official insect. The project taught students hands-on lessons in how government works and was the first time children had ever proposed a bill to the Illinois legislature that became law. Then-Gov. Dan Walker signed it on Oct. 2, 1975.

“If I could talk to that man, I'd say 'Back off!'” said Andrew Finley, a fifth-grader who was one of the students who gave presentations to the school board and city to get Dennis' mosaic butterfly sculpture declared a local landmark.

When Andrew and his classmates were in third grade in 2014-15, they followed suit with their effort to get the mosaic butterfly named a local landmark, and they, too, succeeded, celebrating their success on the 40th anniversary of the original law.

“I worked hard on that,” Andrew said. “I do not want them to do that. Why would someone want to do that?”

Andrew said he learned the entire process of how to get a bill moved through the process to become a law, both locally and federally. He also learned about monarchs and that they're endangered, and he and his family planted milkweed, which monarchs require to live and breed, to lend the butterflies a helping hand.

“Sadly, it hasn't all been working, but we're trying our best,” he said. “Monarchs are important and beautiful.”

Robert Burries said the monarch represents Dennis School to him, and is a symbol of what makes the school special and unique.

“I feel like we should have the monarch butterfly because we worked very hard to turn (the mosaic) into a landmark,” Robert said. “And if they take that (symbol) away, it's not going to be Dennis the same way, because our symbol is the butterfly. That's what Dennis is. I think we should keep it.”

The process of learning how to get a law passed, Robert said, made him and the other kids realize that you don't have to be an adult to change things.

“It made us realize we're powerful,” he said. “We can do things. You don't have to be grown up to be powerful.”

Teacher Linda Burnham, whose class the boys were in during the landmark project, said she thinks the state symbols provide a teaching tool for kids to learn about the native flora and fauna, and losing those symbols will take something precious from kids and adults, too.

“It teaches our students what native elements are in our state,” she said. “I believe the symbols are important to our schoolchildren, for them to recognize things that belong to us. I just believe they're very important symbols that they can take ownership in and learn to preserve.”

State Sen. Sam McCann, R-Plainview, sponsored successful legislation in 2015 that was prompted by a group of fourth-graders at Chatham Elementary School to make sweet corn the official state vegetable.

McCann defended the use of the various state symbols in a statement, saying he feels the state symbol bills grow organically within regions and communities throughout Illinois.

DECATUR – Thursday was the 40th anniversary of the day that Gov. Dan Walker signed into law the bill proposed by Dennis School third-graders, …

DECATUR – Ava Clemens was so nervous about addressing the Historical and Architectural Sites Commission that she cried a little when it was over.

DECATUR – Students and teachers at Dennis School can expect to encounter random, floating fluff for a while, thanks to the milkweed-planting p…

DECATUR – A hair dryer is a typical oft-used appliance in most homes, and probably most of us never give a second thought to how much energy it uses.

DECATUR – Three-year-old Sophie Baggett had just gone eyeball-to-eyeball with the official Illinois State Reptile on Sunday afternoon, and her…

DECATUR — On the day William Barnes died, he sat near the small waterfall, 262 varieties of flowers and 93 types of shrubs in the butterfly ga…

Parents pick up their children at Dennis School, which has a monarch butterfly mosaic. Legislation has been introduced in the Illinois Senate to discard all state symbols. Dennis was instrumental in having the monarch butterfly declared the state insect during the 1974-75 school year.

Students leave school at Dennis, where butterfly reminders are ubiquitous.

Parents pick up their children Tuesday, February 7, 2017., at the Dennis School on Decatur. Sen. Tom Rooney has introduced a bill to discard all state symbols.