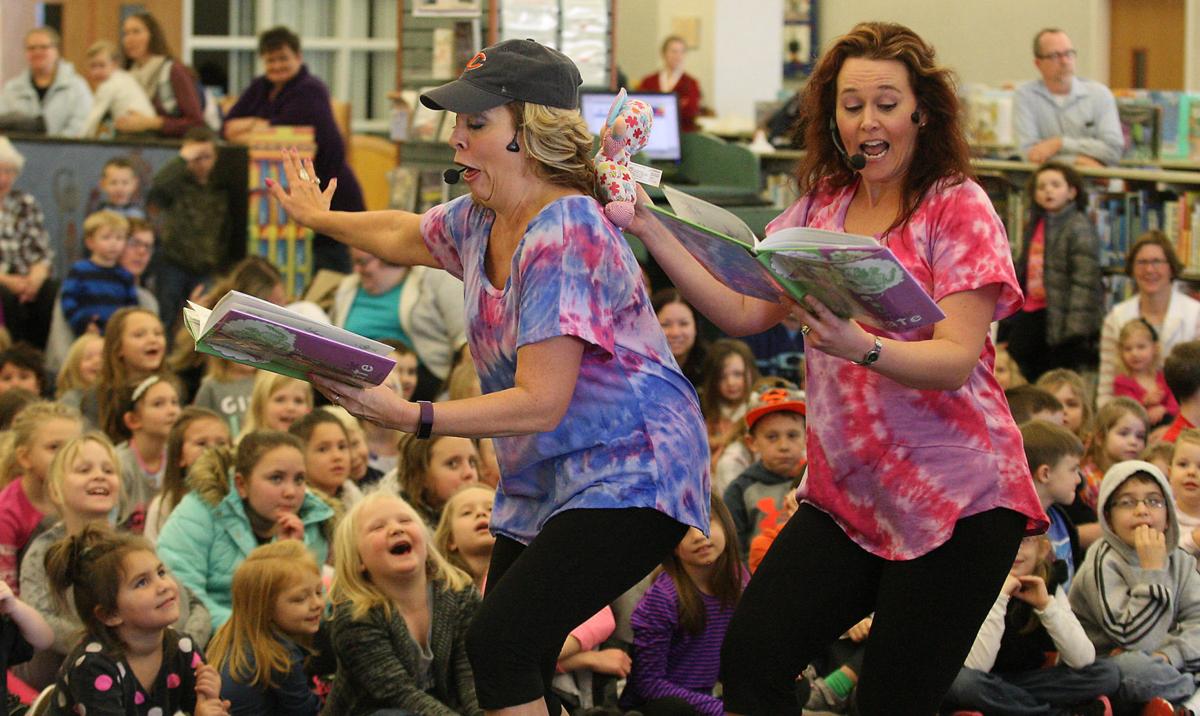 Susan Bishop, left, and Alissa Henkel act out a scene based on the children's book, 'The Almost Terrible Playdate' by Richard Torrey during their READiculus show at the Decatur Public Library. 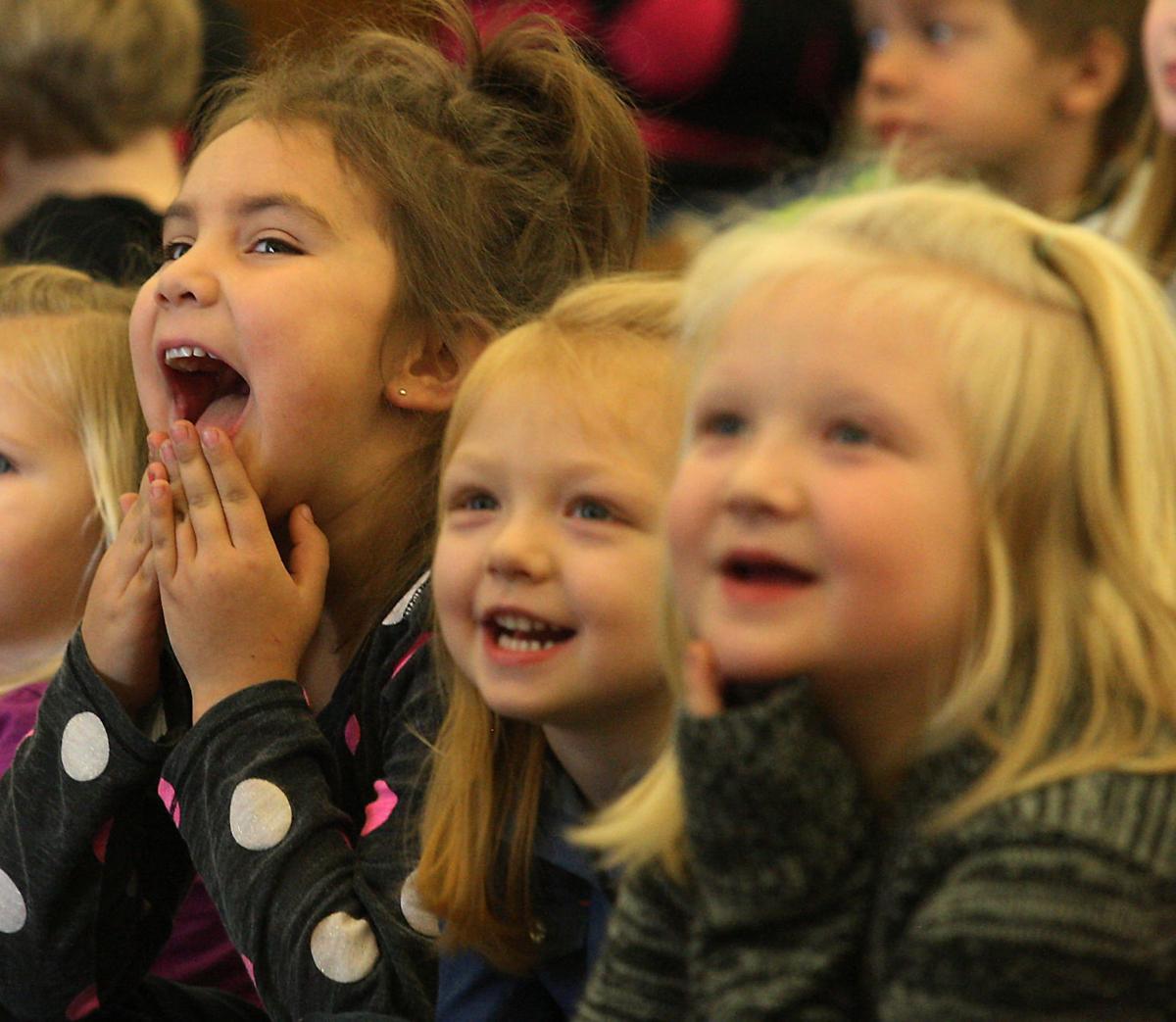 From left, Sofia Gomez, 6; her cousin, Kiley Barnes, 3; and Kiley’s sister, Laney Barnes, 7, respond while sitting from the front row.

DECATUR – READiculous debuted a “new” book at their Between the Holidays Show on Thursday, an older work titled “Morris and Boris: Three Stories.”

In the third installment of the three-story book, Morris and Boris play hide and seek. Alissa Henkel, head of Adult Services, portrayed Boris the bear, who is trying to teach library assistant Susan Bishop's Morris the moose how to play the game. Morris is a bit slow to learn, so Boris tells him to close his eyes and he'll hide and then Morris can look for him.

Henkel dashed out into the crowd of children seated on the floor and sat down behind a child who immediately decided to sit elsewhere, but Kaydence Stearns, 10, hopped up and sat in front of Henkel. The girl even took off her coat to throw over Henkel's head to help conceal her. Kaydence's brother, Kolby, 8, followed suit and, in spite of other children shouting, “She's over there!” Bishop really did have to look for her.

“It seemed like a good idea to hide her,” Kaydence said after the show. Both children said they liked the Morris and Boris characters and hope to see more of them in future shows.

Bishop said she came across the book and it looked just right for their show. The reactions of the kids and their parents showed they agree.

“I think it's a keeper,” Bishop said.

Bishop and Henkel have performed more than 175 shows as READiculous, so named because, as Henkel said in the show's introduction, “We read a ridiculous number of books in a ridiculous amount of time.”

The women almost always choose beginning reader books with two characters, so they can act them out without assistance, always holding the books and referring to them as they perform because the point is to promote reading to kids. However, when they perform at the library, they can use books with three or more characters and enlist the assistance of children's librarian Katie Gross and library assistant John Schirle. The show they gave on Thursday, as is usual with their library performances, lets them try out new material and gauge the audience reaction. READiculous performs in schools throughout the area as well as the library.

Two characters are always in their shows, though: Elephant and Piggie, from a series of children's books by Mo Willems. The library recently received a donation, which partially paid for new Elephant and Piggie hats for the women. The hats they've been wearing for a long time were getting worse for wear, and now that they have new ones, they can add “I Broke My Trunk!” to the show. To act out that story, Bishop said, they need to have Elephant's trunk wrapped as if it's broken, which is difficult to do in the midst of a performance, but now that they have two sets of hats, one can be wrapped and all she has to do is duck out of sight and switch hats.

And with the addition of Morris and Boris, Bishop has another task.

“I need some better antlers,” she said of her “costume” for Morris the moose, which was actually a flimsy Christmas reindeer antlers headband.

DECATUR – READiculous and the Elephant and Piggie books go together, as Forrest Gump might say, like peas and carrots.

Teachers often talk about the “brain drain” or “summer slide” they encounter the first few weeks of school.

DECATUR – With only two regulars in READiculous, performing books that have more than two characters is difficult at best, and in many cases i…

DECATUR — A plan to guide the future of the Decatur Public Library is in the process of being developed.

DECATUR – When Susan Bishop and Alissa Henkel started the Really READiculous show in 2011, they probably had no idea they'd still be doing it today.

DECATUR — A favorite game of the kids in READiculous Jr. is “scream and die.”

DECATUR — City librarian Rick Meyer is a self-described “numbers guy,” so when he came to the staff's retirement gathering for children's libr…

DECATUR — Brittany Wentworth brought her three children to Decatur Public Library on Friday just for something fun to do, with no idea that th…

Susan Bishop, left, and Alissa Henkel act out a scene based on the children's book, 'The Almost Terrible Playdate' by Richard Torrey during their READiculus show at the Decatur Public Library.

From left, Sofia Gomez, 6; her cousin, Kiley Barnes, 3; and Kiley’s sister, Laney Barnes, 7, respond while sitting from the front row.