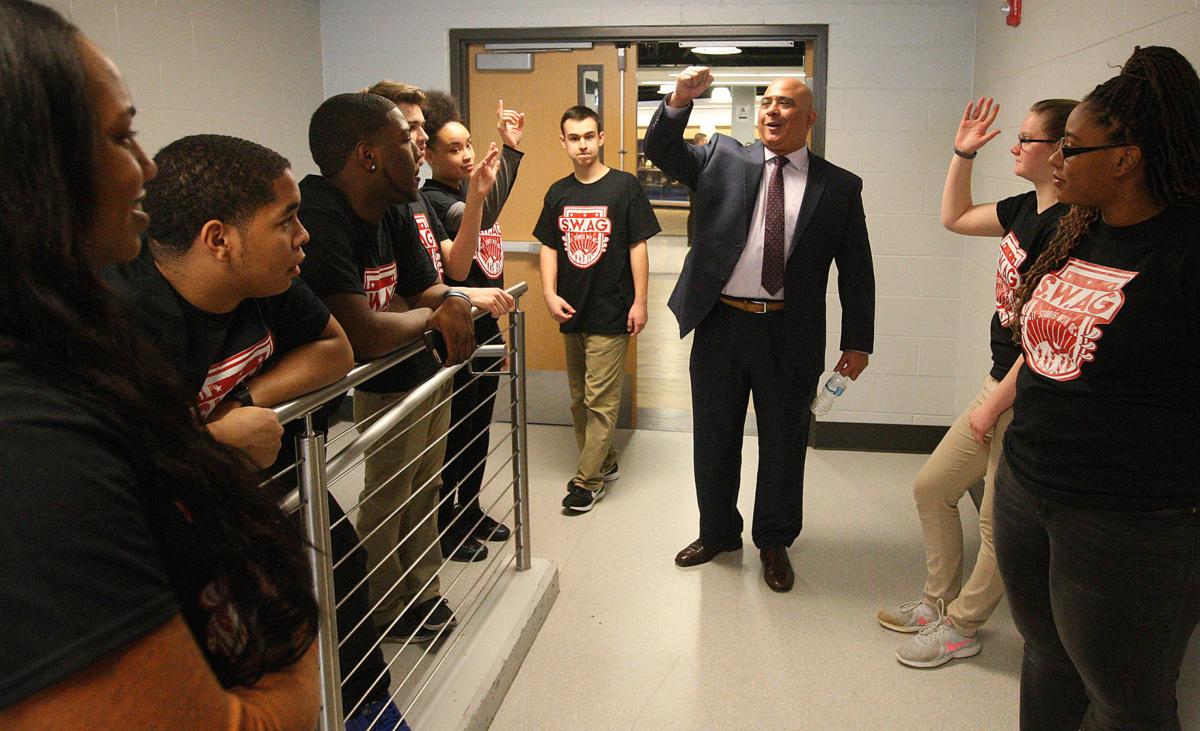 Robert Aranda shares encouragement with members of the MacArthur High School freshman mentors group while asking them about their future plans after he participated in an Ag Academy panel discussion at the high school Tuesday. Aranda is the principal at William Jennings Bryan High School in Omaha, Nebraska. The school has an ag academy similar to the one to be implemented in Decatur. 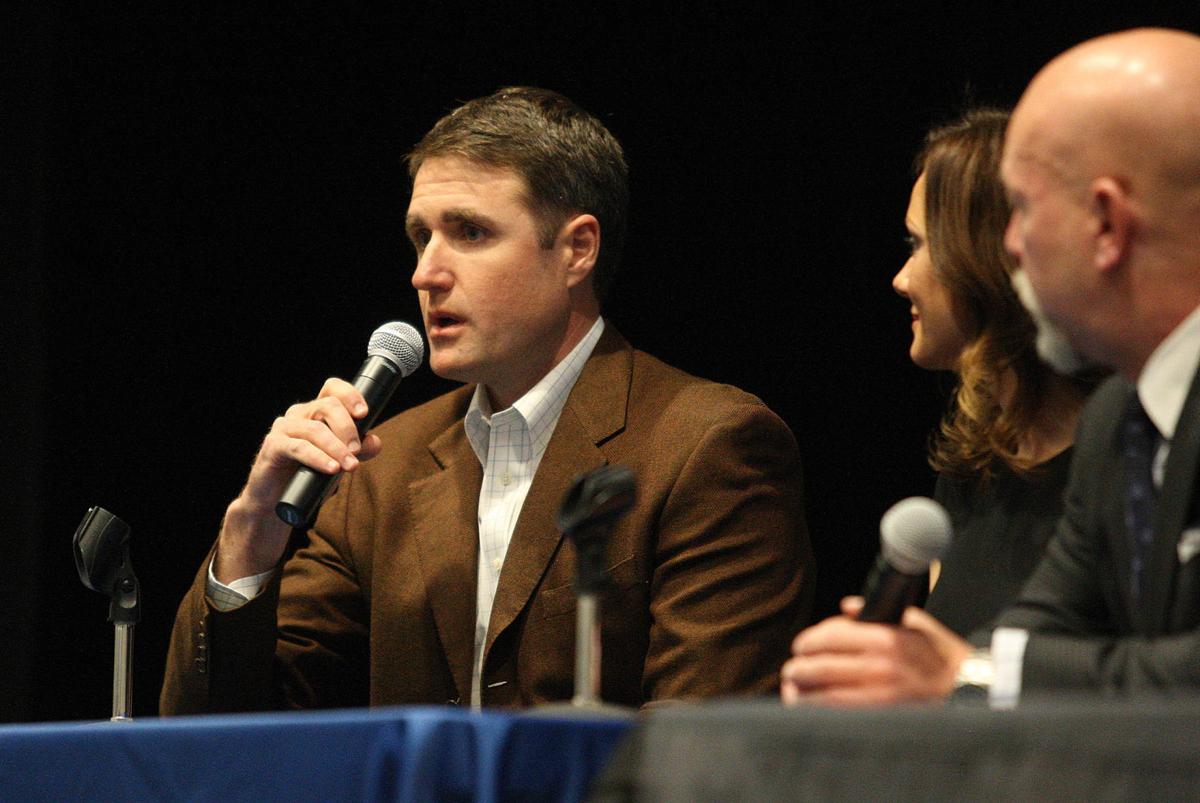 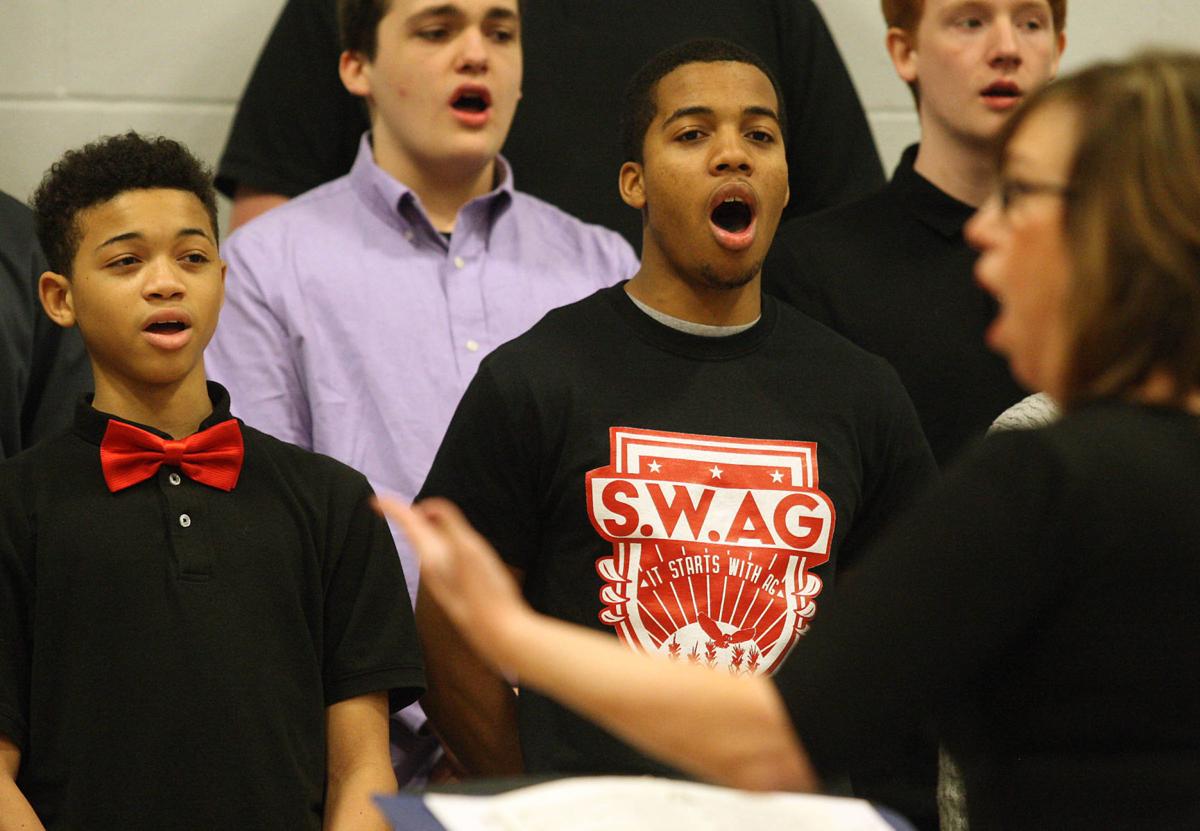 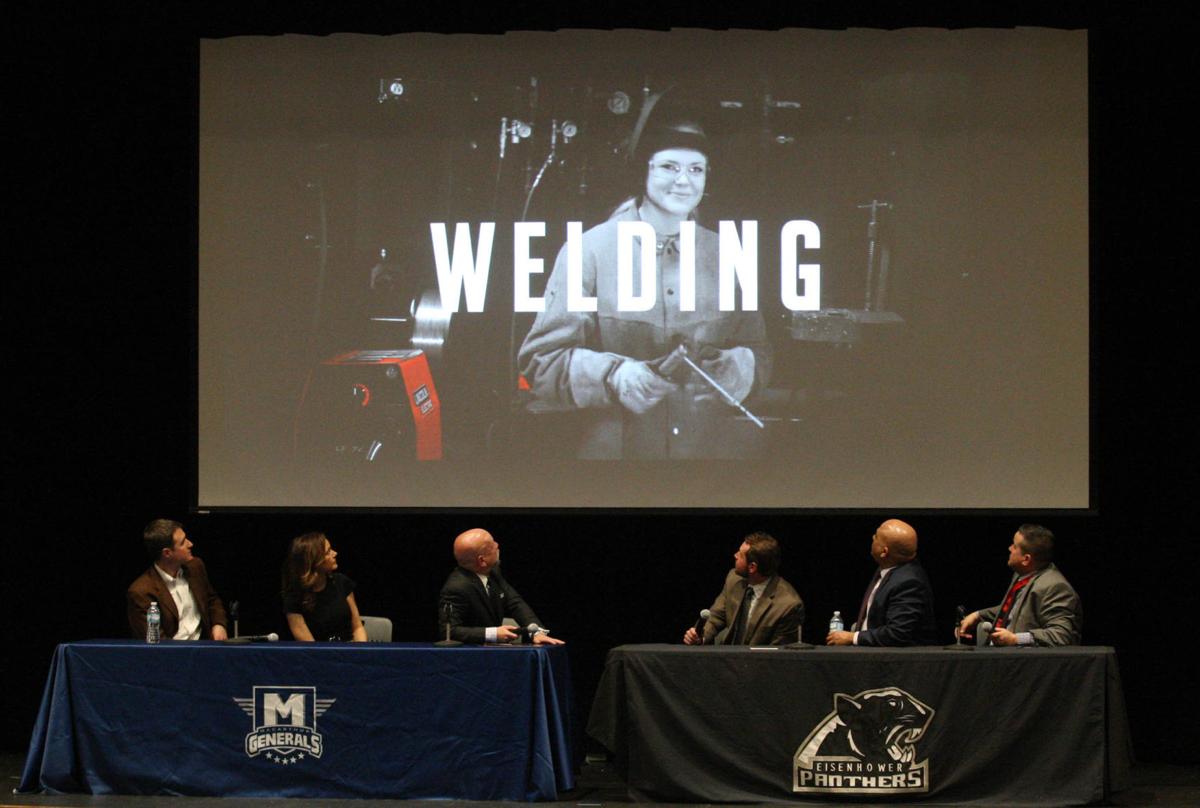 Ag Academy panelists and attendees watch a short video about welding as an example of an agriculture job during the Ag Academy panel discussion at MacArthur High School Tuesday.

DECATUR — Chris Edwards and Carson Donnel are recruiting their classmates to sign up for the Dwayne O. Andreas Ag Academy at Decatur's two high schools next year.

The two eighth-graders at Thomas Jefferson Middle School are enthusiastic about being among the first students to experience the new program, paid for with a $1.65 million grant from the Howard G. Buffett Foundation. The program will include a “living science” farm on 15 acres at Enterprise School and Decatur schools' first FFA chapter.

“I think it'll be fun for anyone who gets to do it,” said Carson, who is interested in mechanics and has driven a race car since he was 6.

“Agriculture is one-third of every job in America,” Chris said. “Agriculture touches almost every part, and if a student doesn't want to choose a job in agriculture, it still looks good on an application as experience.”

At Thomas Jefferson, 90 students have already expressed an interest in the ag academy, which kicks off in the fall, and Principal Nate Sheppard credits the two boys with stirring up some of that interest with their talks in classrooms.

A panel discussion was held at MacArthur High School on Tuesday that included Robert Aranda, principal of Omaha Bryan High School in Nebraska, which has had an ag academy for six years. The 1,800-student building calls its ag academy a “pocket academy,” with 140 of the students enrolled in the program.

Representatives from Decatur schools visited Omaha and the Chicago High School for Agricultural Sciences to help them make plans for Decatur's.

One important step is already wrapped up. Andrew Klein and Ashley Austin have been hired to teach the classes at MacArthur and Eisenhower high schools respectively.

“We'll be the face of the program for the students,” Klein said.

“We'll be teaching agriscience classes, and we'll also have an ag business course,” Austin said. “We have different backgrounds in agriculture, and our passions are different, which is great for us so our students have more opportunities.

"It's going to be as student-focused as possible, so if our students want some things, we're kind of the factor behind that to make sure they have the education they want.”

As students move through the academy, their areas of interest will come more into focus, Klein said.

The ag academy is only open to freshmen and sophomores, said MacArthur Principal Cordell Ingram, because the point is to spend as much time as possible learning and exploring careers. Juniors and seniors have largely already decided their areas of interest.

Fewer than 2 percent of agriculture careers are in farming, said Brian Byers, vice president of Neuhoff Media and a member of the DPS Foundation's board, with skills needed from scientists to welders and all points in between.

Decatur Public Schools Foundation Executive Director Zach Shields said hundreds of ag-related jobs are unfilled in the Decatur area. Students, some of whom may not want to go to college, could find their niche in the trades and in ag-related jobs like welding or mechanics that don't require college.

“It's a disservice pushing everybody into college,” Shields said. “They don't need $100,000 in debt if they don't know what they want to do.”

“The bulk of our employees are in the service department,” said Sloan, whose company has John Deere sales locations in Illinois and Wisconsin. “Our philosophy is the most important thing is just showing up. We can place with an expert and you can learn so that eventually, you'll be the expert.”

The FFA component, said Nicole Bateman, who credits her experiences in it as a student with helping her focus on her career path, will provide students with experiences and the “soft skills” needed college and beyond. Bateman is the executive director of the Midwest Inland Port and community marketing manager for Limitless Decatur and Macon County.

“What's exciting is the versatility,” said Paul Fregeau, superintendent of Decatur schools. “It's welding to Wall Street. Whatever students are interested in, they can do it here in Decatur or in Illinois or beyond.”

Agriculture and food science employment potential in the United States:

Howard Buffett is the Herald & Review's Newsmaker of 2017

CHICAGO — For months, the Democratic Illinois attorney general's race amounted to a stop Kwame Raoul campaign. The veteran lawmaker from the H…

What do you want to be when you grow up? That’s a question asked of young (and not so young) people all the time.

Five at 5: Buffett funds new ag program for Decatur schools and 4 other stories you should see

Decatur public school officials announced the creation of a new agriculture program affiliated with the Future Farmers of America on Monday. T…

DECATUR — Unemployment is trending down statewide, including in Central Illinois, and while job growth remains slower than officials would pre…

SPRINGFIELD — An $18 million endowment is headed to Lincoln Land Community College's agriculture program thanks to a Macon County farming couple.

DECATUR — Agribusiness is much different than it was when Kim Kidwell’s career began at the University of Illinois at Urbana-Champaign in the 1980s.

Robert Aranda shares encouragement with members of the MacArthur High School freshman mentors group while asking them about their future plans after he participated in an Ag Academy panel discussion at the high school Tuesday. Aranda is the principal at William Jennings Bryan High School in Omaha, Nebraska. The school has an ag academy similar to the one to be implemented in Decatur.

Ag Academy panelists and attendees watch a short video about welding as an example of an agriculture job during the Ag Academy panel discussion at MacArthur High School Tuesday.