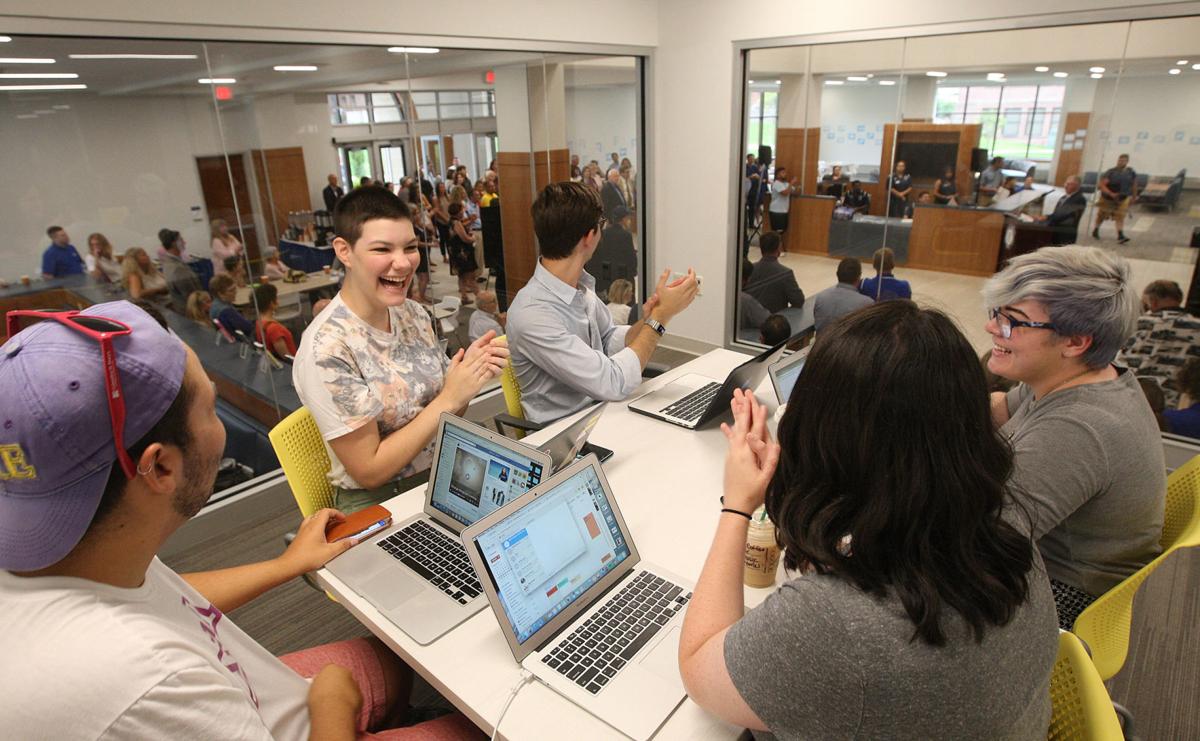 From left, students Thomas Berthelon Lathrop, Olivia Irmiter, Alexander Bravos, Mairyn Dodson and Madison Burress pause from their meeting in the Think Tank Room to join attendees clapping in the adjacent area during a ceremony in honor of the opening of the new Millikin University Commons Monday afternoon. Photo gallery at herald-review.com. 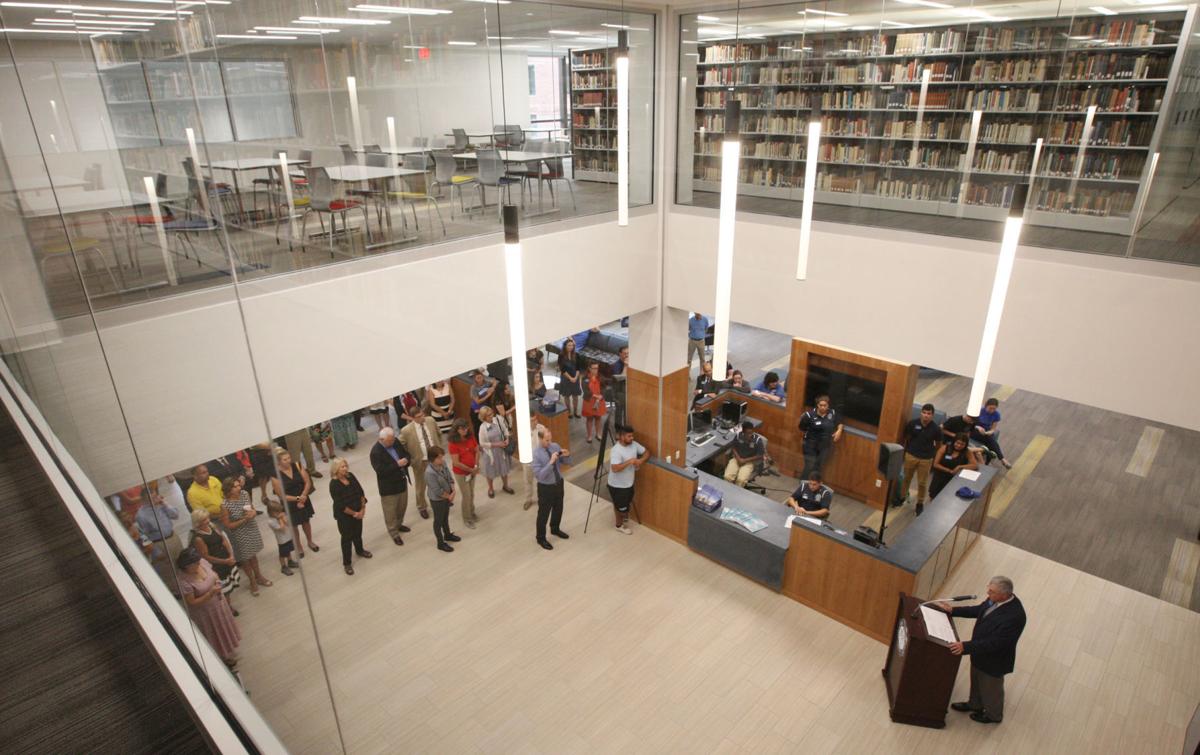 Millikin University president Patrick White addresses those in attendance for a ceremony in honor of the opening of the new Millikin University Commons Monday afternoon. White is pictured through windows of the library on the second floor.

DECATUR — The brand-new University Commons at Millikin University is already a busy place, with students gathering to chat or finding a quiet corner to study.

“Everybody needs a living room,” said Justin DeBo, a senior who is double-majoring in music business and information systems. “This is Millikin's living room.”

Named to reflect the hope that it would become the center of life at Millikin, much as the village commons once was in days gone by, university President Patrick White said the building is Millikin's Main Street, a crossroads and front door. The $27 million project is part of a larger $85 million capital campaign.

Everything that was in Richards Treat University Center — and more — has been moved to the Commons.

“There is more space in this building for events than there is in (Richards Treat),” said Z. Paul Reynolds, director of student development and the University Commons. “One of the things that we're kind of billing this building as is a new front door to the campus. It really is what I like to call a 'fusion building,' and there are some of these buildings on college campuses.

"It's not just a student union, though it functions that way for Millikin, but it also fulfills the role of dining hall, library, administration offices and student services.”

White said the outside of the building is the red brick and roof lines of the other, older buildings on campus, but the University Commons is also the look of the future of Millikin, with state-of-the-art technology and architecture to encourage the whole campus to use the building.

“This is a great day for Millikin and for Decatur,” White said, adding with a chuckle, “We even managed to schedule a total eclipse of the sun. You have no idea how many favors I had to call in for that.”

The Commons was built to replace Richards Treat, and plans for that building have not been finalized, Reynolds said.

The dining area, on the lower level of University Commons, is open and spacious and includes new food choices, with a wood-fired pizza oven. A performance stage is wired with microphones and lights, and TVs will play sports and entertainment.

On the ground floor, besides the Common Grounds coffee shop, are the Doug and Diane Oberhelman and Caterpillar Inc. Leadership Area and Think Tank, studios for collaboration, high-tech performance lab, a welcome area and plenty of couches and tables for students to gather around.

The library, archives, media arts and research areas are on level two, banquet facilities on level three and the fourth floor includes areas for quiet research and study.

Human services major Angie Bravo is a student development employee and senior building manager and was part of the group of students who helped make decisions about University Commons.

“As a freshman, I could never have imagined being a part of opening the University Commons,” she said.

She was part of the transition team and was able to see the entire process, she said, which was a valuable learning experience, which is part of Millikin's performance learning model.

“I was able to give my opinion on certain decisions, and this helped me feel included as a student as well as offering the opportunity to grow as a professional,” she said.

'Day of Action' breaks down stereotypes of Decatur

DECATUR — Sophia Zinger of Oak Park said she didn’t know much about Decatur when she chose Millikin University for college, but there was a pe…

Millikin University student dies after near drowning in Missouri

SAINT LOUIS — A Millikin University student has died a little more than a week after he was rescued from the water at Fugitive Beach near Rolla, Mo.

Worried you've damaged your eyes during the eclipse? Here's an easy way to tell

If your eyes feel funny after watching the solar eclipse even though you wore protective glasses, don't panic.

In case you missed it: Girl hit with rock, eclipse skies, sailor missing

DECATUR — While looking around for ideas for a startup business, Bryce Kapitzky had a realization: A lot of businesses have unfinished project…

DECATUR – Michael Beschloss has more than more than 110,000 followers on Twitter and appears on Time Magazine's list of the world's top Twitte…

From left, students Thomas Berthelon Lathrop, Olivia Irmiter, Alexander Bravos, Mairyn Dodson and Madison Burress pause from their meeting in the Think Tank Room to join attendees clapping in the adjacent area during a ceremony in honor of the opening of the new Millikin University Commons Monday afternoon. Photo gallery at herald-review.com.

Millikin University president Patrick White addresses those in attendance for a ceremony in honor of the opening of the new Millikin University Commons Monday afternoon. White is pictured through windows of the library on the second floor.