Become a Member
Read Today's E-edition
Share This
Watch now: How this Decatur school is taking field trips — virtually
0 Comments
Share this
1 of 4 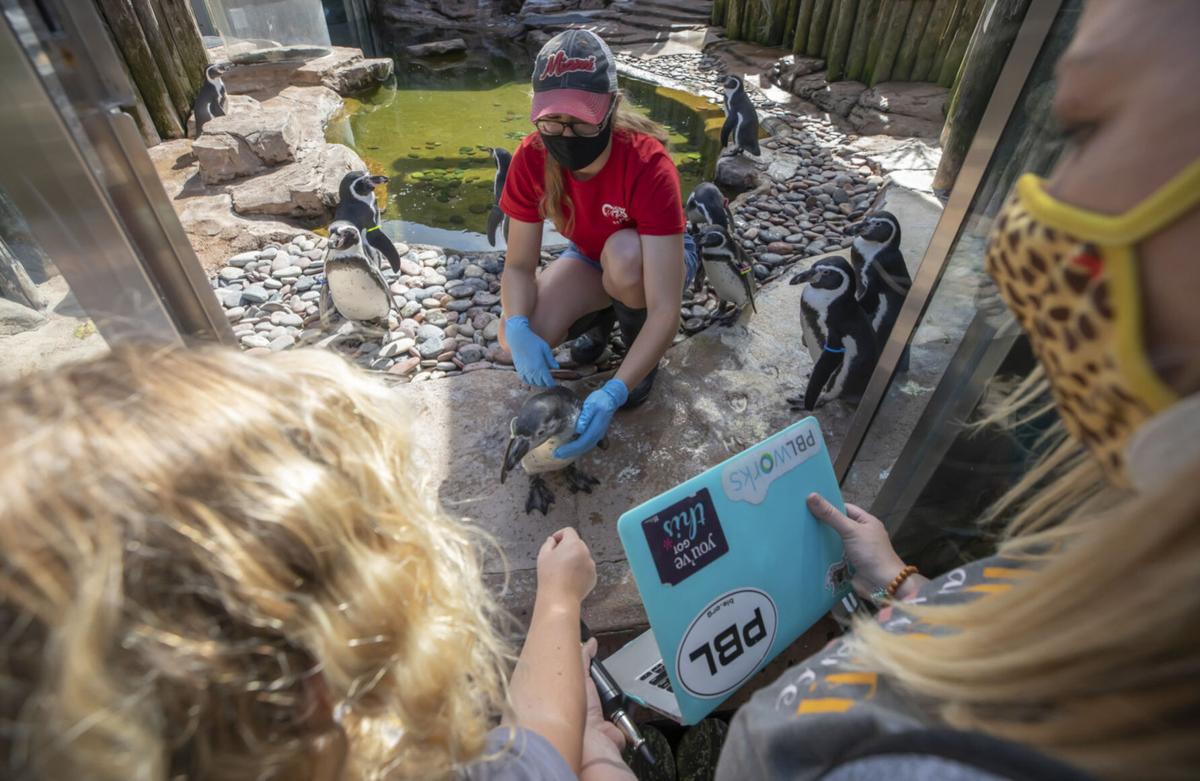 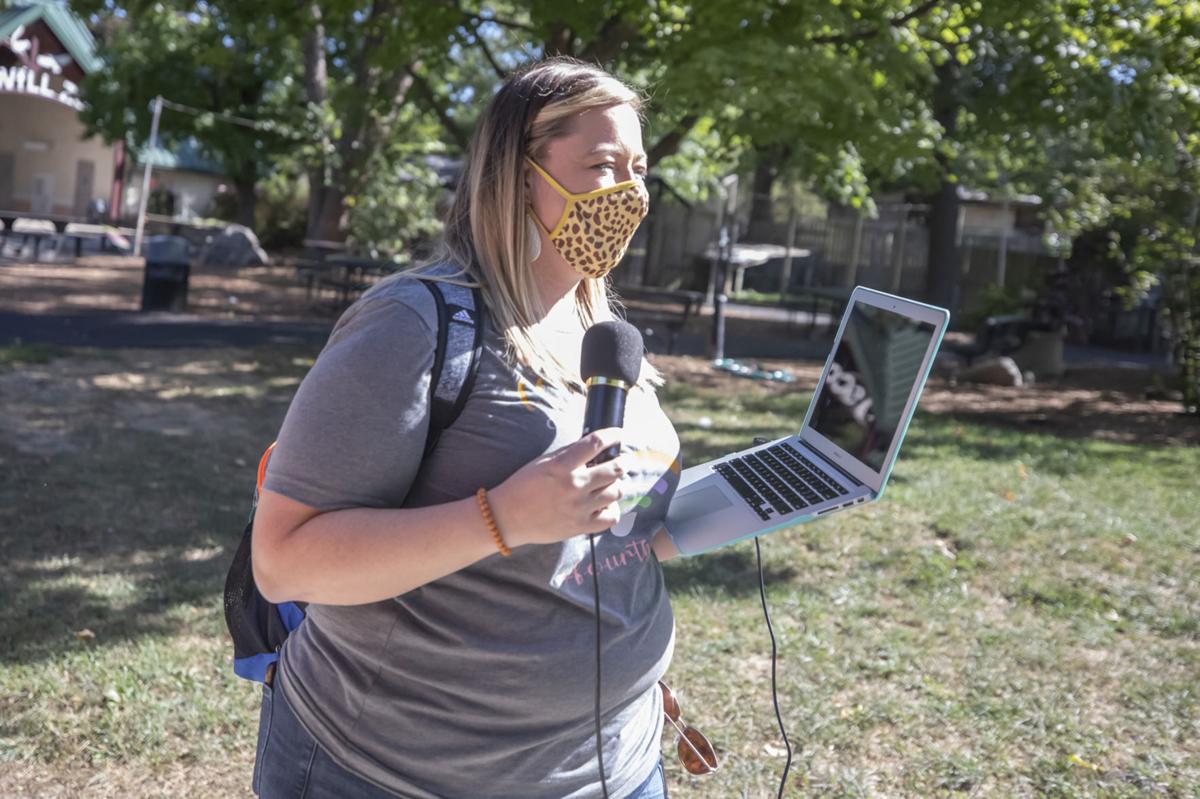 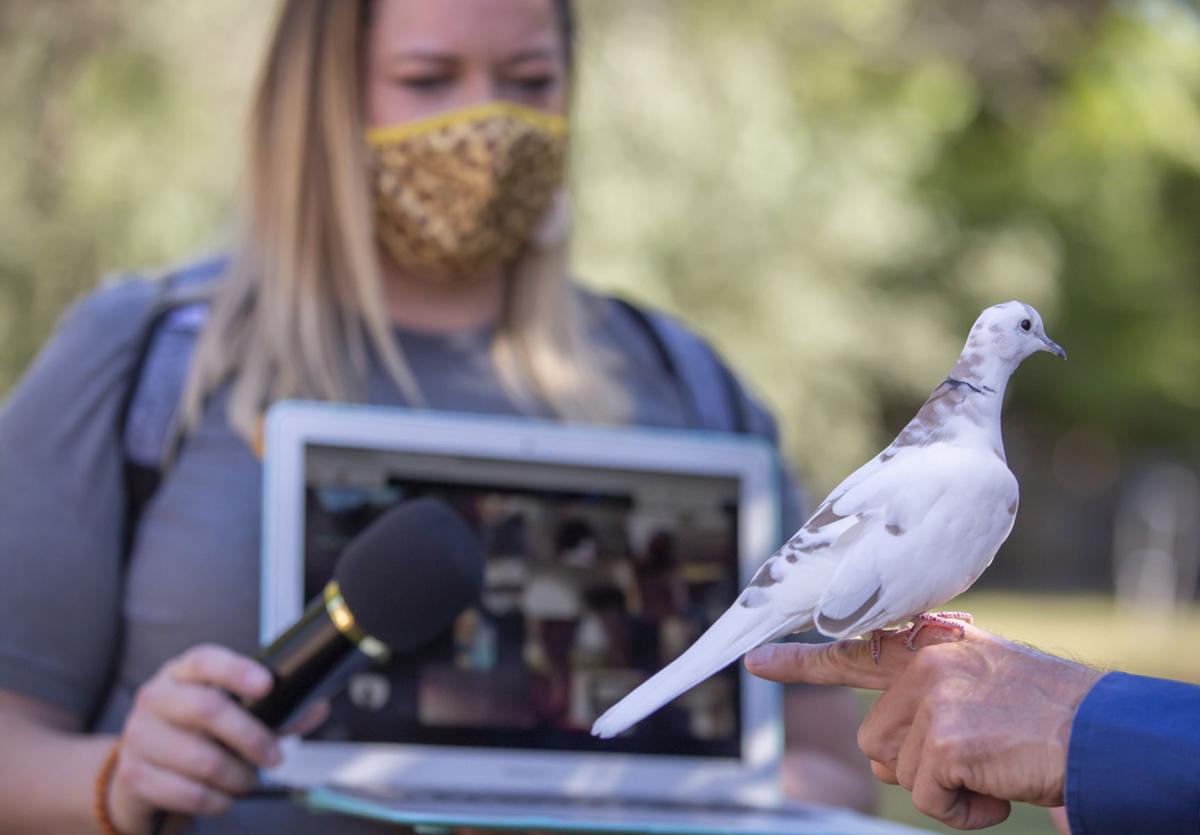 Fourth-grade instructor Sarah Smith listens to Assistant Director Dave Webster talk about doves on Friday during a "virtual field trip" to Scovill Zoo. The fourth-grade instructors from Dennis Lab started the "virtual field trip" on Fridays, where they visit different locations and the students participate by asking questions and interacting online. 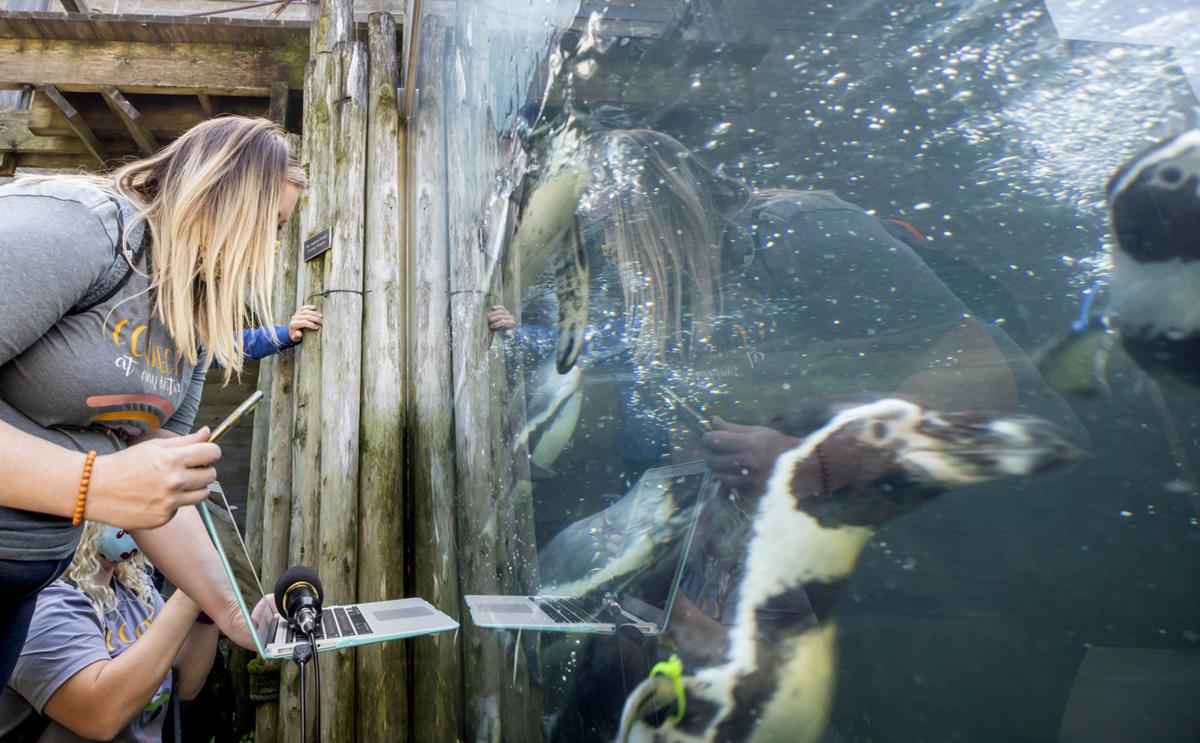 Fourth-grade instructor Sarah Smith points her laptop camera toward the penguins on Friday during a "virtual field trip" to Scovill Zoo.

DECATUR — When Dennis School teachers found out school would be remote this year, it presented quite a dilemma as far as the school's signature project-based learning model went.

Most projects begin with a field trip, so the students can learn about the topic at hand.

The fourth grade teachers — Jennifer Park, Sarah Smith and Brianna Fink — came up with a plan: virtual field trips. Each Friday they'll take the laptop and cell phones somewhere and the students can tag along via video conference, ask questions, and learn. The first one was Friday at Scovill Zoo.

“We picked birds (as our focus) because everybody can see birds at home, they're everywhere,” Smith said.

The first bird was a collared dove, who sat cooperatively on the hand of Dave Webster, assistant director, and didn't mind at all when he demonstrated her wings and showed off her feet. After that, he held Rose, a chicken, and offered her a favorite treat, mealworms. She was so enthusiastic that she accidentally flipped one onto Smith's laptop keyboard.

“Don't worry, she'll take care of that for you,” Webster said, and showed Rose the worm, which she snapped up immediately.

The next stop was the penguins, and their keeper, Amanda Huy, had brought small fish to feed them. The honking sounds they made as they scurried to gather round for their fair share made the teachers laugh. Webster pointed out that the penguins' feet, in contrast to most birds, are webbed because they swim and that they can't fly; their wings are used to propel them through the water. The group moved around to the side, where visitors can watch through glass as the penguins swim underwater, and Huy tossed more fish into the water to encourage the penguins to swim and show off their skills.

Though students had to be reminded to mute themselves a few times, most of their comments and questions were enthusiastic, and while it wasn't the same as being there in person, Smith said, it was a way to get up close and personal with some zoo animals in preparation for their next project, which is raising community awareness about pet ownership and the responsibilities it entails.

“A lot of animals have to go to the shelter because people don't know what they need,” Smith said. “We want to raise awareness and encourage people to do their research before deciding on a pet.”

Lizzie Van Ert, the zoo's education and volunteer coordinator, said some of the animals at the zoo were someone's exotic pet at one time. A gopher tortoise who lives there, for example, was found wandering and it's assumed he was someone's pet who was lost. Gopher tortoises are not native to this area and he wouldn't have survived on his own, she said.

Similarly, several of the animals, like Illie the turkey vulture, were injured and couldn't be returned to the wild. Illie, short for “Illinois,” hurt her wing. Once her rehabilitation was complete, she moved to Scovill Zoo, where she shares her home with a hawk who was also injured and couldn't be released. Because neither can fly, Van Ert told the watching students, there is no need to enclose the two birds. They have shelter from rain, but their area is open otherwise.

Ernie the emu was also popular with the watching children. A gentle soul, Ernie allowed the teachers to pet him and posed for a photo with them.

“I never thought I'd have my picture taken with an emu,” Park said with a chuckle.

GALLERY: Scovill Zoo through the years

GALLERY: Scovill Zoo through the years

Visit herald-review.com to see a video of virtual learning at Scovill Zoo.

Watch now: How these Decatur students are finding common ground talking about race

Sara Nave seeking entries for poster contest featuring messages that include "the inspiration and motivation to keep learning one more day."

In the midst of a pandemic, Sara Nave and her family moved to a new home.

New Good Samaritan exec is back to her roots

Nicky Besser is back home and getting her feet wet as the new executive director of the Good Samaritan Inn.

The focus of the first year of the plan was student experience; year 2, student environments. Year 3, he said, is the whole student. The plan's overall goal is to “Establish a support network that will identify and address students’ physical, social/ emotional, and mental health needs to allow each student to reach their full potential.”

Boo at the Zoo announces plans for this year's festivities

Visitors at Scovill Zoo’s Boo at the Zoo are welcome back beginning Oct. 16

The staff of Dennis School had too much fun with their soda pop and Mentos experiment on Friday on the Kaleidoscope campus.

Watch now: Reptile enrichment center at Scovill Zoo is thanks to a scout

Having an outdoor enrichment space for the reptiles at Scovill Zoo has long been on Dave Webster's wish list. 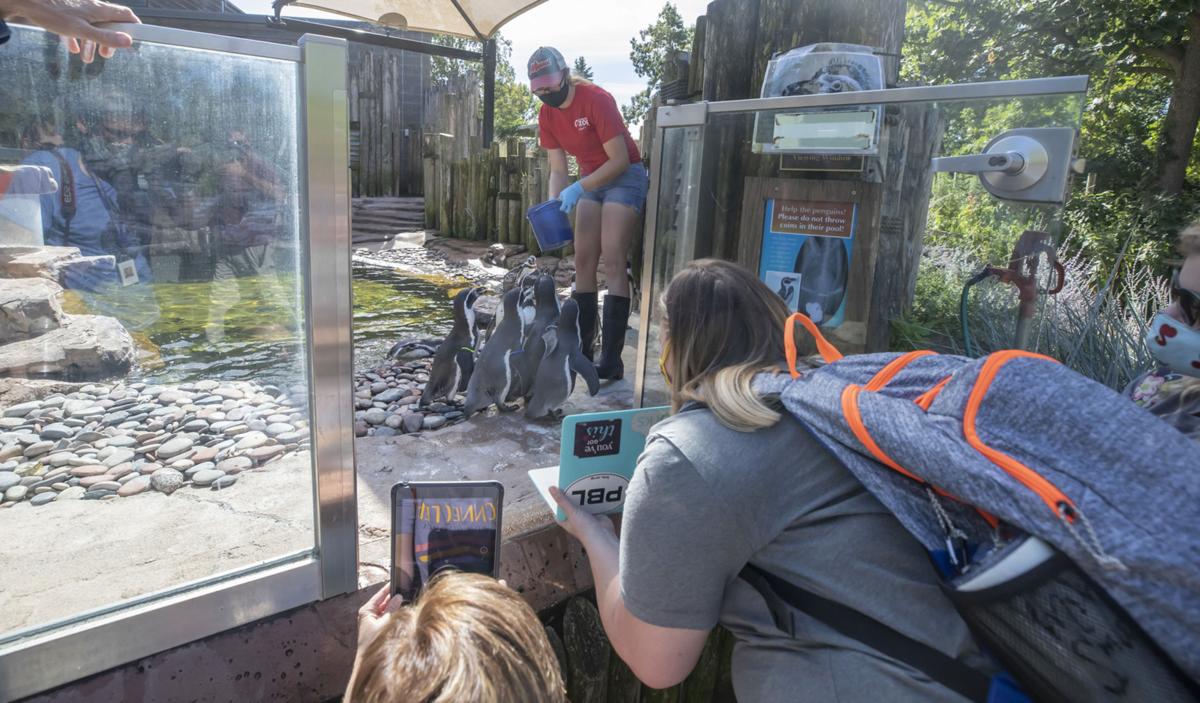 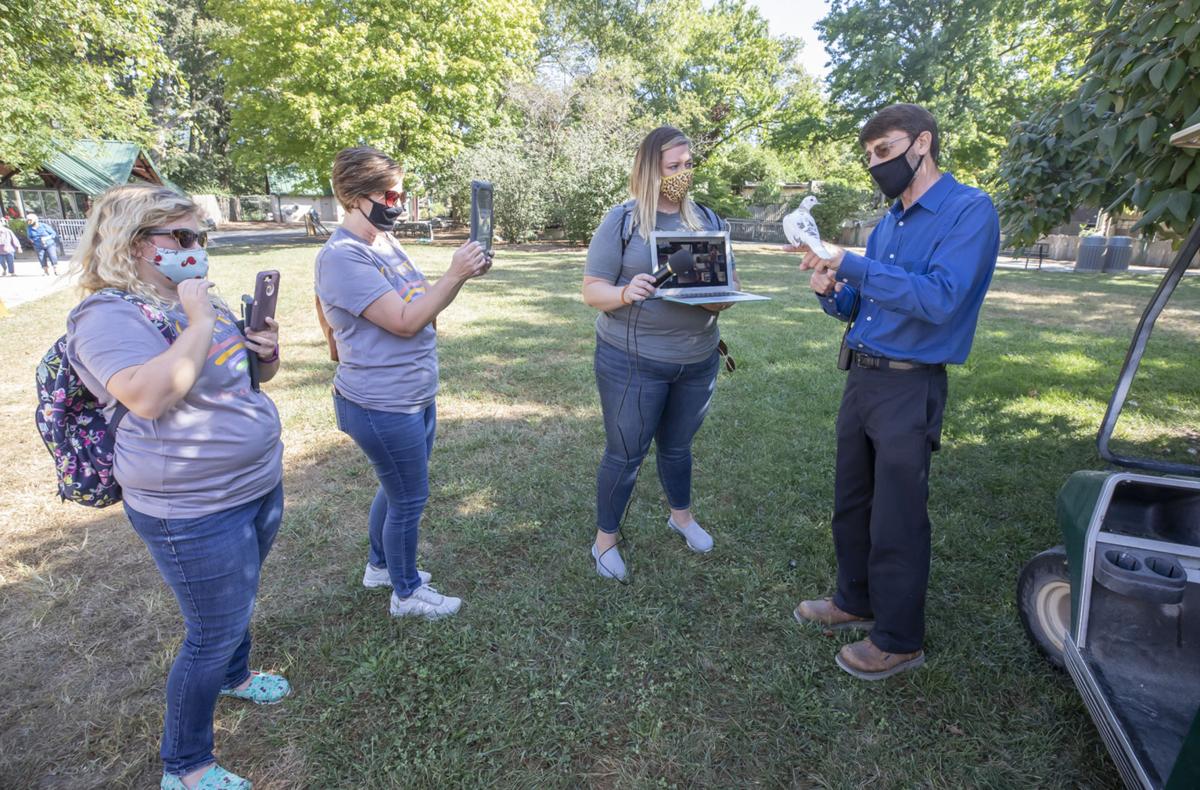 Fourth-grade instructor Sarah Smith listens to Assistant Director Dave Webster talk about doves on Friday during a "virtual field trip" to Scovill Zoo. The fourth-grade instructors from Dennis Lab started the "virtual field trip" on Fridays, where they visit different locations and the students participate by asking questions and interacting online.

Fourth-grade instructor Sarah Smith points her laptop camera toward the penguins on Friday during a "virtual field trip" to Scovill Zoo.