LINCOLN — The final graduation at Lincoln College was supposed to be a moment of joy mixed with a bit of sadness.

However, the faculty, staff and 2022 graduating class of the now bygone school found happiness in the college’s final ceremony Saturday. Officials had announced in March that the 157-year-old institution would close this month, citing financial issues caused by the coronavirus pandemic, declining enrollment and a cyberattack.

The college president and other speakers addressed the crowd in the school’s gymnasium with hope for the future. Little was said about the last days.

“It’s both a wonderfully happy day and a terribly sad day,” he said. “After 157 years, the coronavirus really knocked us in the chin.”

According to Gerlach, 22 colleges have worked with Lincoln to accept the remaining students, including their credits, tuition prices and residency requirements.

“I’m happy we were able to take care of our other students,” he said. “We’ve done all we can in prepping the students to be ready for that transfer. They will do well.”

More than 200 students graduated during Saturday’s ceremony. Organizers decided to keep the festivities similar to previous graduations, although the ceremony was also shown virtually this year.

Alumni were invited back to the college on April 30 to revisit the highlights from their college years. A view of the bookstores and other halls and buildings, a meal at the cafeteria, and a tour of the community were part of the visits.

Jocelyn Paige Fletcher graduated on Saturday with a bachelor's degree. She had plans to remain on campus for work. Now, she has no choice but to look elsewhere for a job.

“I had the intention of working here after graduation,” she said about her first career step. “Now that’s been taken away, so I have to figure something else out. And I still don’t know what I’m doing.”

Puerto Rico native Miguel Reyes was the only graduating student receiving a bachelor's degree in theater.

“I’m the last one in my department graduating,” he said. “Everything happens for a reason, probably something bigger for us in the future. We’re just going to go forward.”

Reyes plans to return home for the summer, but that’s not where he will stay. Disney, Pixar and other studio companies are on his list of aspirational career moves.

“But my ultimate goal will be Marvel Studios,” he said.

Dressed in a purple robe, Kaylee Winebrinner received her associate degree on Saturday.

“I was planning to stay all four years,” she said. “I’m pretty sad, but if this is happening, then maybe it’s meant to be.”

As a Lincoln native, her limited college years were part of her hometown experience.

“This is my home,” Winebrinner said. “It was just another home to me.”

The future for Winebrinner may include colleges close to home, such as Millikin University or the University of Illinois-Springfield.

According to Lincoln native Stacy Jackson, the college closing is another worry for the city. A nursing home, a development center and other businesses have closed in the past few years.

“But this is huge,” she said while waiting for her nephew's graduation. “Because if this isn’t in place, it’s going to make an impact on us.”

Lauren Grenlund, director of public relations at the college, is moving on just like the students.

“I have been looking for a new place to work,” she said. “I’ve had some offers. Just looking for which one will be the best.”

Grenlund has studied the vibe of the campus since the news broke in March that the college would permanently close at the end of the school year.

“Everybody has been handling it positively,” she said. “I think some of our long-term staff are having difficulty, because they’ve been here since they were young. They bleed purple.”

With mixed emotions, Ariana Trotter received her bachelor’s degree while wearing a black robe and a cap adorned with flowers and a crown.

“Lincoln was another home to me,” she said.

“It’s not very often you get to say goodbye to people and know you’re not going to see them again,” said Trotter’s classmate Caroline Reynolds.

Although the two graduates had already planned to continue their education elsewhere, they had built a strong bond with one specific teacher, Monica Overton, the lead faculty for community and human services.

“Leaving her, knowing she is left to be in an awkward state, leaves us in an uneasy feeling,” Trotter said. “She’s like a mom to us away from home.”

Overton wasn’t worried about her future as much as her students were. She instead focused her concerns on them.

“My students aren’t just numbers, they are important to me,” she said. “Their success, what happens to them next, is a natural thing for me to consider.”

With a strong faith, Overton said she is relying on God for direction.

“He’ll navigate me wherever I need to go,” she said. “It’ll be good, but it’s definitely a journey. I’m excited about what’s next.”

Lincoln College alumni are still shocked by the school’s sudden announcement it would be closing at the end of its spring semester in May. They also worry about the impact for current or would-be students.

"Today’s unexpected and sudden closure announcement is devastating news for our local community."

"It just hurts. I think the long-term effects will be felt (across the city)."

Watch now: Paul and Starr Wilhelm prepare to leave Decatur to volunteer for the Red Cross

Watch now: Paul and Starr Wilhelm prepare to leave Decatur to volunteer for the Red Cross 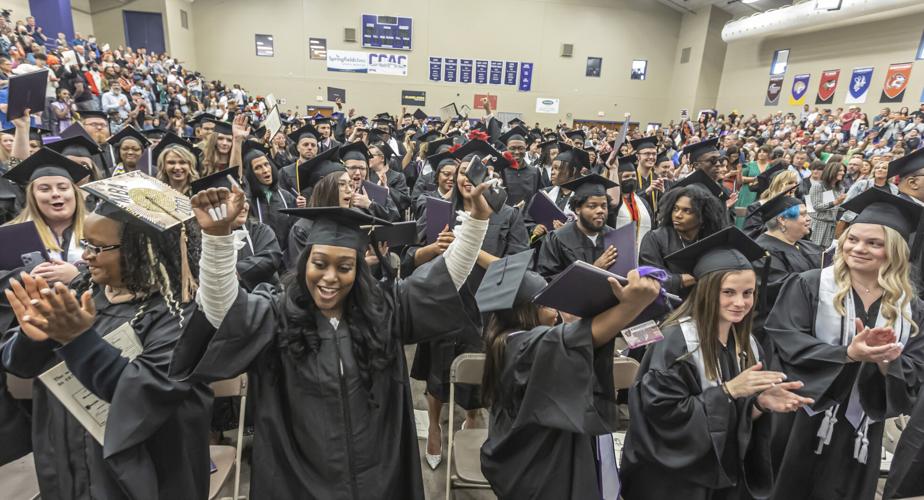 Bloomington's Melberta Adams, second from left, and other graduates cheer in the Lincoln Center on Saturday after Lincoln College’s final commencement ceremony. 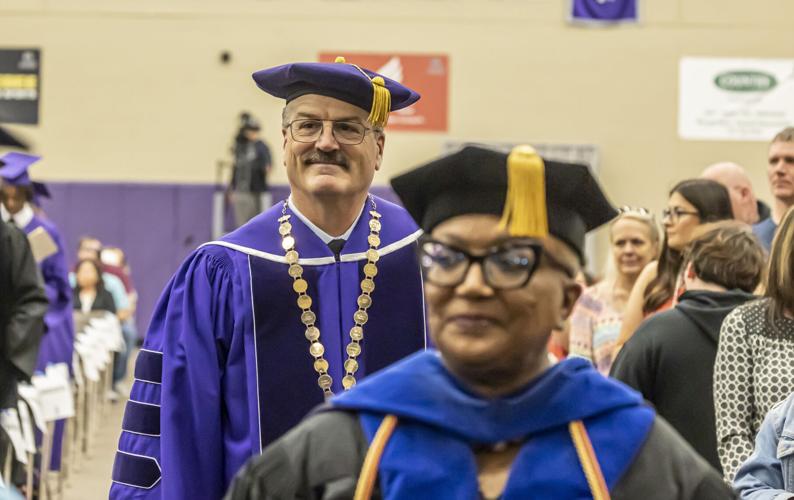 Lincoln College President David Gerlach walks in for graduation ceremonies in the Lincoln Center on Saturday. The event was the final commencement for the college, which is closing down after the spring semester. 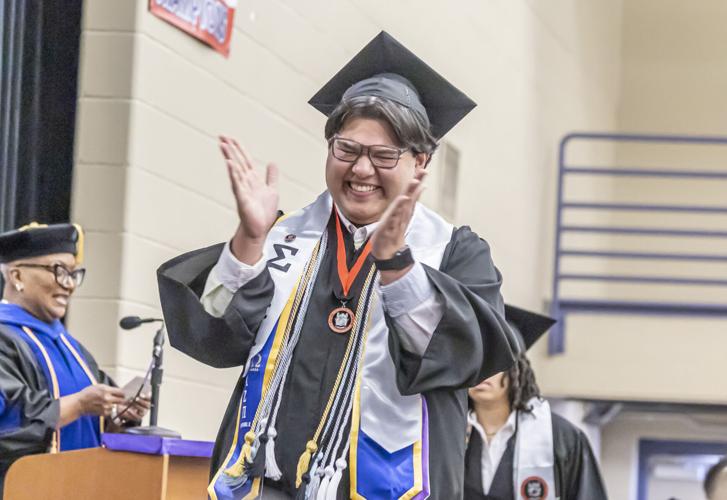 Miguel Reyes, the last student from the theater department to graduate with a bachelor's degree, cheers after walking across the stage in the Lincoln Center. 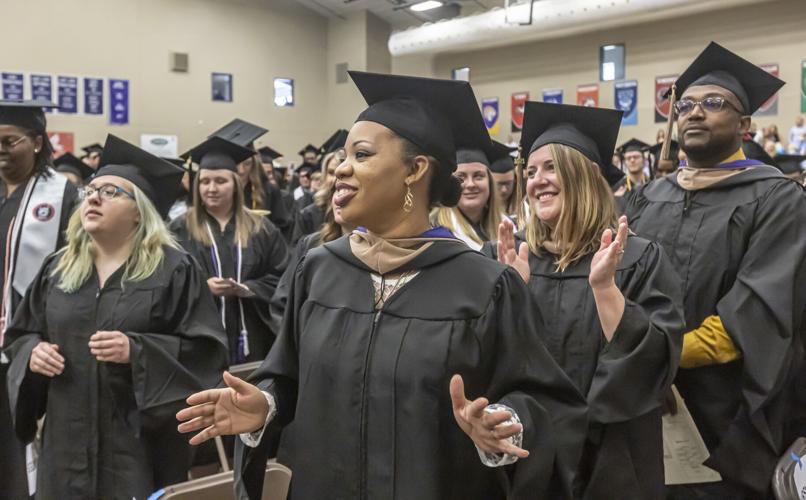 Lincoln College students sing and cheer along with soloist Quentin Brackenridge in the Lincoln Center on Saturday during the school's final commencement ceremony. 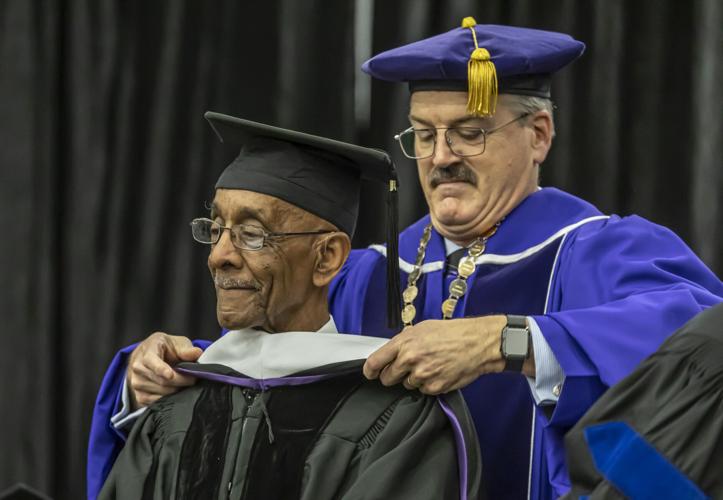 The Rev. Glenn Shelton is given an honorary degree from Lincoln College President David Gerlach during commencement ceremonies on Saturday in the Lincoln Center.