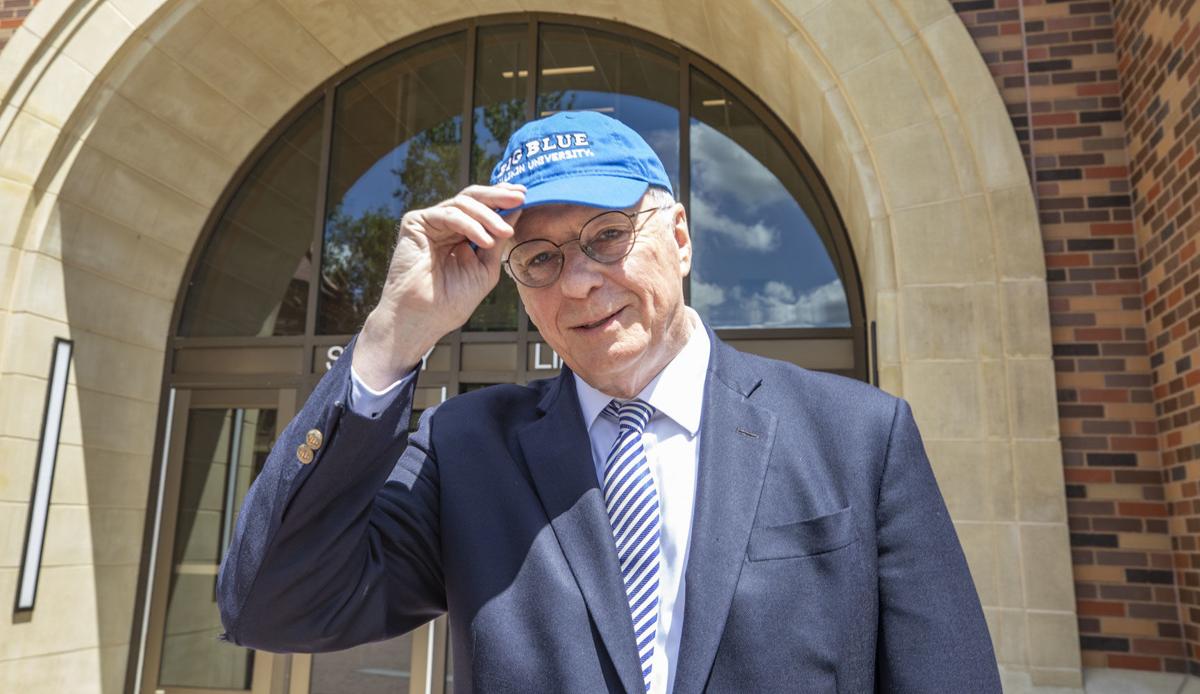 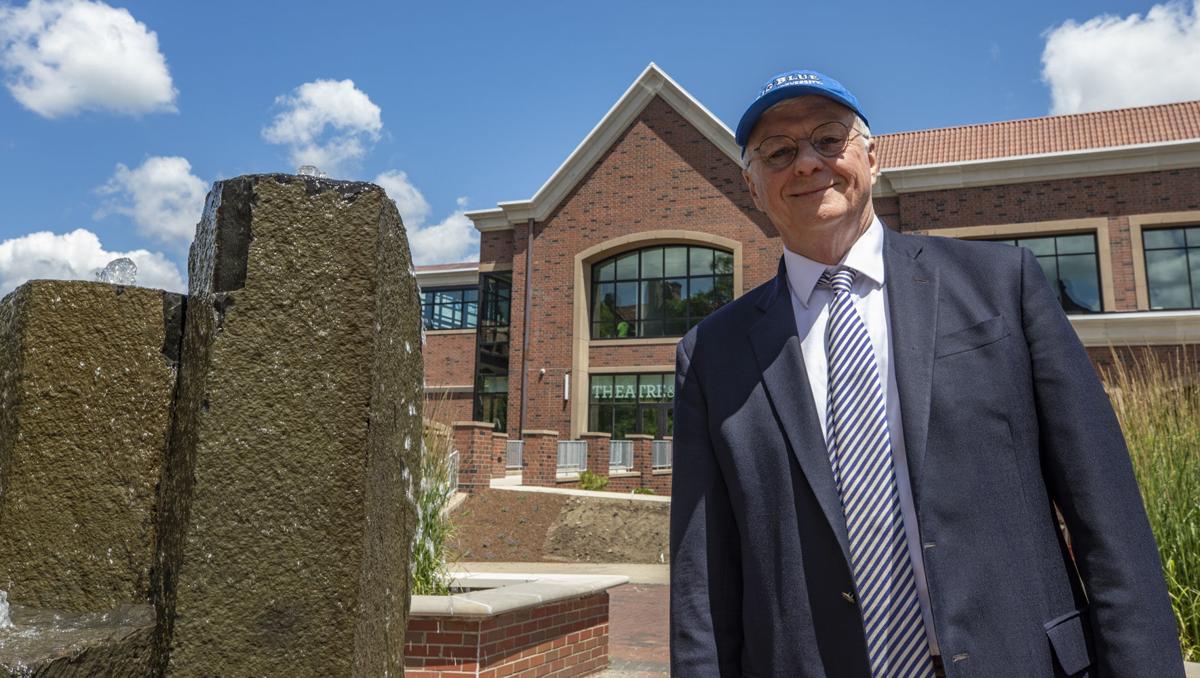 Patrick White, wearing his trademark blue Millikin University cap, poses for a photo outside the Center for Theatre and Dance on the campus of Millikin University. The building is one of the campus projects completed during White's tenure as president of the university, which ends Tuesday with his retirement.

President Dr. Patrick White poses for a photo in front of the  on the campus of Millikin University. 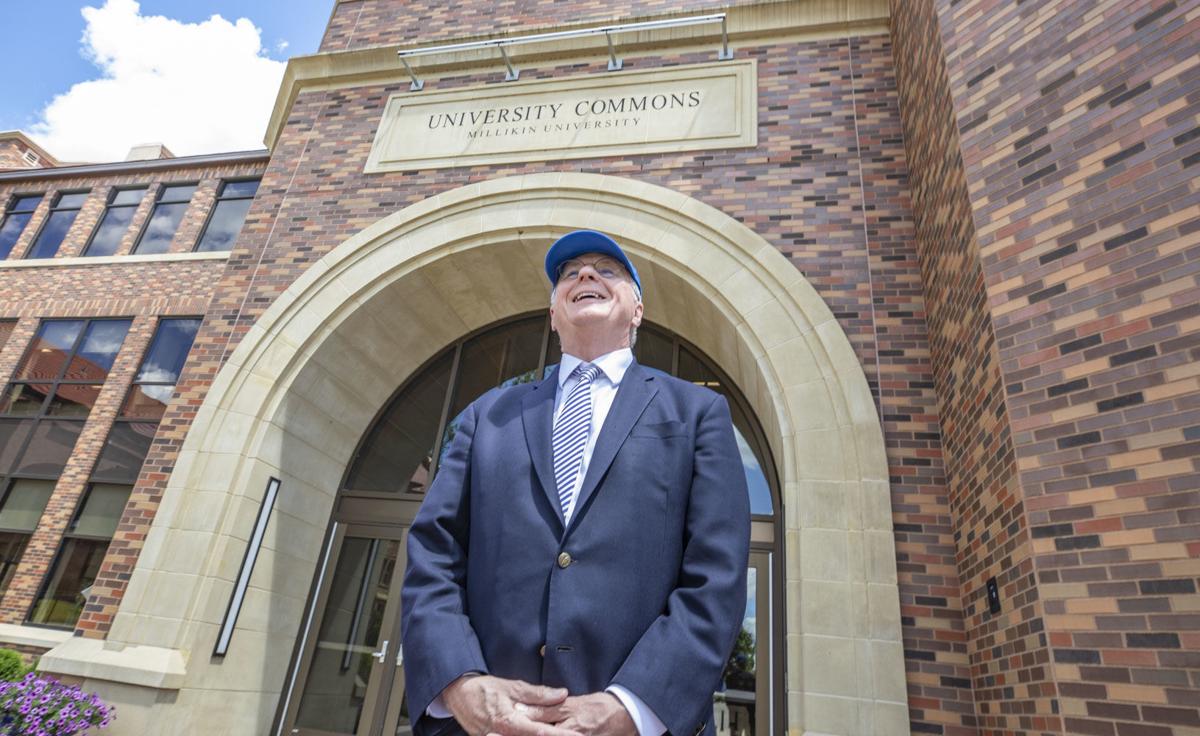 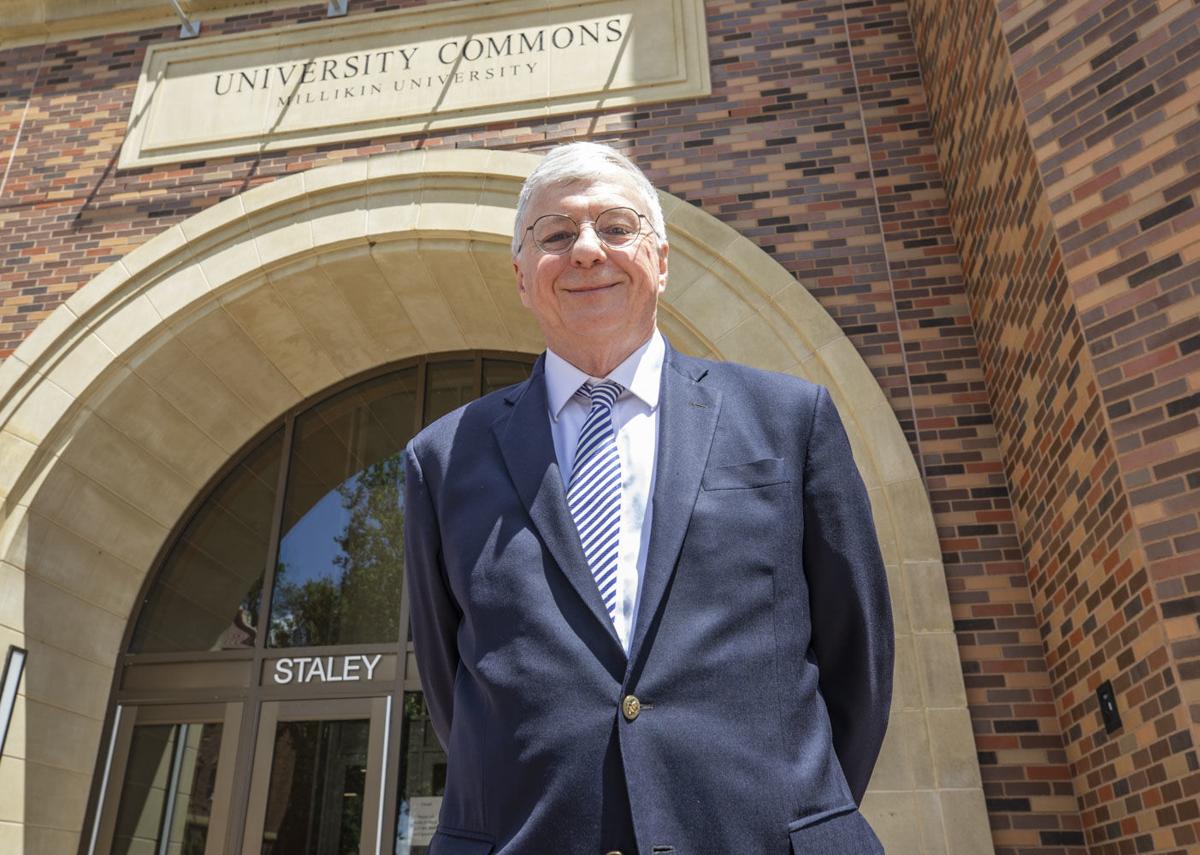 DECATUR — Patrick White ended his time as president of Millikin University in the midst of a pandemic, missing several of the “last things.”

White was named interim president in July 2013. The board of trustees named him president officially in October of that year.

His tenure as president ends with his retirement Tuesday. He will be succeeded by Decatur native James Reynolds, who begins work on July 1.

White and his wife, Chris, are moving to South Bend, Indiana, where their twin daughters both live. Katie, named for Katharine Hepburn, teaches at Notre Dame University, while Molly teaches middle school art. The Whites' son, Paddy, is a surgeon and lives in Indianapolis with his wife, Eileen, and their children, Oliver and Norah, so the family will be able to see more of each other.

South Bend also appealed to them because they lived there for 18 years when White was a dean and associate dean at St. Mary's College.

“Fortunately, we got a house,” White said. “In January or February, we were wondering, if we can't find a house, we'll have to store (our things).”

The house is on a small lake and White is looking forward to peaceful views and taking it easy. Everyone keeps asking him what he's going to do.

“I will be retired,” he added, laughing. “I will be reading an awful lot. I was an English professor and there's still a lot of books I need to read, and re-read, and re-read again. And hopefully spending a lot more time outside. We don't have any great plans to travel the world or anything like that. I like to hike the Indiana dunes and the marshlands around northern Indiana and spend a lot more time just walking around and being out in the natural world.”

He's also thinking about studying calculus. He said he was “a bit of a math-phobe” as a student and his children tell him calculus is an eye-opening experience. He has also considered teaching one or two courses at St. Mary's, but isn't in any hurry for that. He taught a course for 10 years on women in film when he was at St. Mary's before, and he said he might enjoy teaching a course on Hepburn.

Due to the statewide coronavirus shutdown, he didn't get to preside over an in-person graduation and shake the hands of students he's known since they were freshmen. The fine arts students had planned a show to send him off, too.

“I don't need that to be about me,” White said. “I'd have been blushing the whole time. But I did want to see them showing off their talents.”

Instead, Millikin held a virtual graduation with a pre-recorded speech by White. There were no shows, final performances or showcases for students in any discipline, as the last half of the spring semester was marked by remote learning. The result was a quiet campus with no students walking around or gathering at the University Commons or White's characteristic presence at every possible event with a blue Millikin cap on his head.

The graduates have been invited to attend the December graduation and walk across the stage, but the fact is, many will likely be busy with work or other commitments.

“We were planning to wait until the fall to do (the grand opening),” White said. “It depends on COVID-19, as so many things do in our lives.”

The softball and baseball fields were “transformative,” White said, and both are paid for, as is the Commons, but the university is still raising money to pay for the Center for Theatre and Dance.

Millikin has 250 theater majors now, and students have far greater scope for learning all aspects of production, from lighting and sound, to more flexible theater space, to performance. The original plan for the building was to renovate the old gym, which would have only accommodated 160 theater majors, but it grew into a much larger and more ambitious new building. The Commons, dedicated in 2017, has become exactly what White hoped it would: a place where students congregate, a place where community events take place, and where students feel at home.

When White arrived at Millikin, he said, he saw very little Millikin spirit wear on campus. But thanks to changes in the campus and the fostering of a sense of pride and community, he sees Millikin shirts and hats everywhere now.

One of his favorite things to say when he sees good things done by the university's students and staff, and he says it often, is “There you are, Millikin.”

Watch Patrick White talk about his time as president of Millikin University at herald-review.com.

Millikin University's new president, James Reynolds, did not grow up planning a career in academia.

Millikin University to stream graduation ceremonies due to COVID-19

Millikin University is finding a way to celebrate graduates despite stay-at-home orders. Details:

“I’m trying to be a tough old bird,” he said. “I’m hanging in there,” said 77-year-old Terry Lidy, one of the 39 Fair Havens Senior Living residents who tested positive for coronavirus.

Got change? Temporary shortage has financial institutions asking customers to cash in their coins

“There is a coin shortage nationwide,” said Don Schlorff, vice president of Gerber State Bank in Argenta. “As far as any problems, it's not caused us any issues. We have asked if people have extra coins, we'll be glad to take it for them and deposit it.”

Patrick White, wearing his trademark blue Millikin University cap, poses for a photo outside the Center for Theatre and Dance on the campus of Millikin University. The building is one of the campus projects completed during White's tenure as president of the university, which ends Tuesday with his retirement.

President Dr. Patrick White poses for a photo in front of the  on the campus of Millikin University.