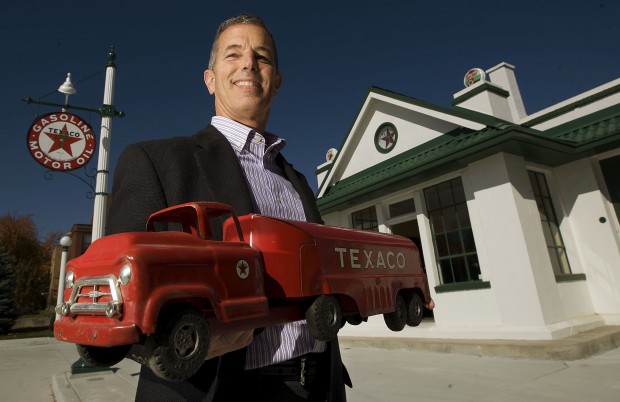 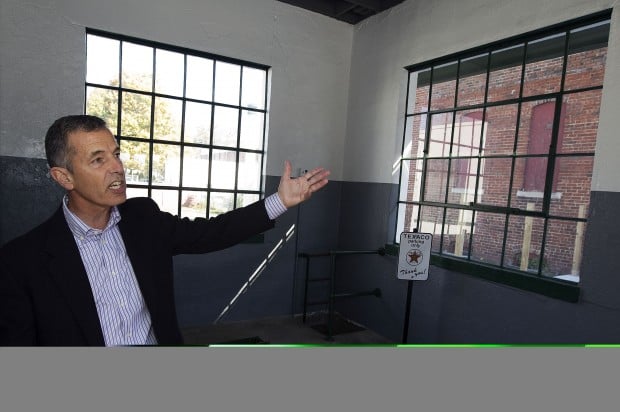 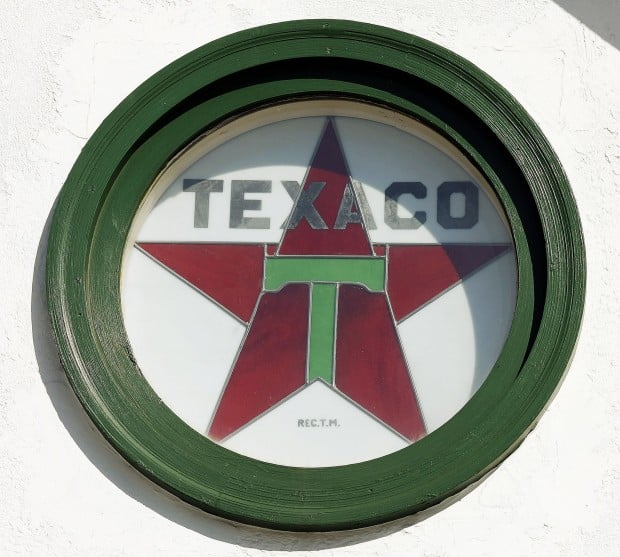 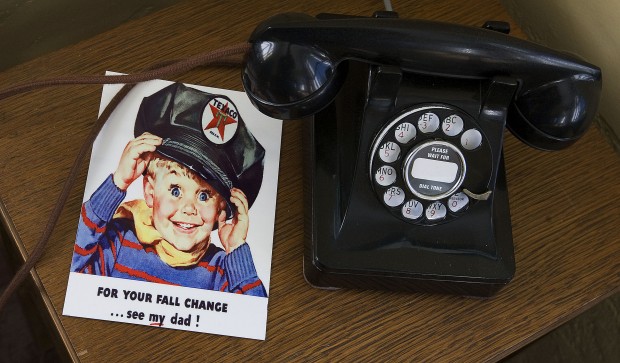 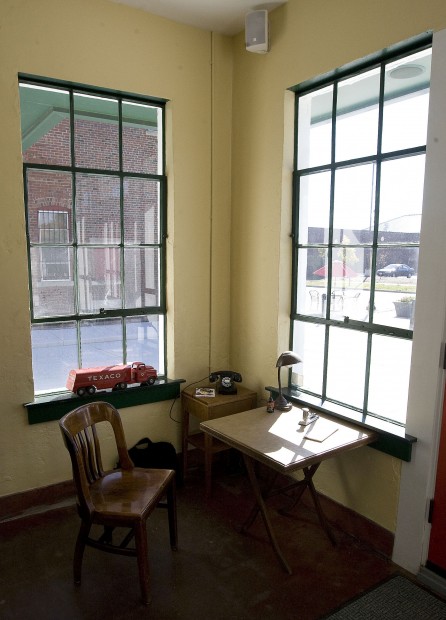 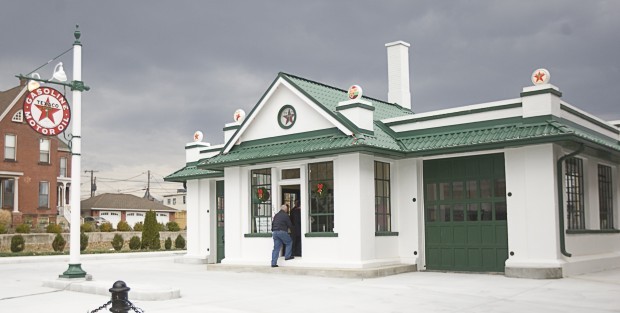 2011 File Photo: The Texaco Station at 266 W. Main Street was opened to the public after four years of restoration work. It was just one of the locations open during the Heritage & Holly Historic Home Tour.

DECATUR — Somewhere, over the rainbow, lovely old buildings don’t get flattened just so another parking lot can be built.

Too often in Decatur that notion has proved to be nothing but a fairy tale, but, just occasionally, dreams really do come true. You can find one at 266 W. Main St., where a 1930 Texaco service station building is accelerating back from the brink and comes fully loaded with cool architectural details last seen in history’s rearview mirror.

Judy Garland is actually singing “Somewhere, Over the Rainbow” on the in-house sound system (the 21st century speakers aren’t noticeable) as the driver of this architectural dream, Bruce Nims, shows visitors around. He plays 1930s music just for atmosphere’s sake and is clearly driven by a passion for authentic detail.

And while his resurrected baby may not be servicing horseless carriages anymore, it sure looks like it’s ready to change the oil on your Duesenberg supercharged roadster and betrays no trace of having spent the past five years as a derelict shell.

The forest green roof and white color scheme is period perfect, researched by Nims and corroborated by ancient paint chips uncovered during the restoration. The cute colored advertising globe lights on little parapets adorning the roof have been put back in place, and a stained glass light-up Texaco star over the entrance shines out proudly after it was fabricated to match a missing original.

The big Texaco hanging sign crowning the forecourt is an original that Nims hunted up online, and the 14-foot fluted metal pole it hangs from were commissioned for the purpose. Matching 10-foot light poles — two at the front, two at the back — of the 80-foot-long forecourt were another re-created touch.

The 1,200-square-foot-building features work bays at the east and west ends with a little office in the middle flanked by a bathroom small enough to fit comfortably inside a Toyota Prius; hard-working auto service guys in the 1930s clearly weren’t meant to park themselves in the restrooms for extended periods. The work areas are lit by 6-by-6-foot windows that let vast quantities of daylight drive through the interior.

The process of steering the station back from the edge of forever gone took more than six years after Nims bought it in 2005. The computer expert who founded an information technology consulting company, Nims Associates, had just sold the enterprise and, as he recalls it, was “looking for something to occupy my time and energy.”

Nims is noted today for being one of the leading lights in the Grow Decatur community enhancement and improvement initiative, which aims to make the city prosper and become a more attractive place to live. Reviving the Texaco station with its gable and parapets and hungry ’30s charm stands as an earlier example of the Grow Decatur spirit: saving something that enhances the city streetscape and makes passers-by take a second look and be glad they did.

“I live on West Main Street, and I would drive downtown two or three times a day past that station and always thought it could look a lot better than it did,” recalls Nims. “So I decided to save it.”

And now his driven efforts are getting statewide recognition. The Landmarks Illinois organization, which fights to preserve historically and architecturally significant buildings, just announced that Decatur’s Texaco service station has won one of its prestigious preservation awards.

Duane Allen, an associate with the Decatur firm BLDD Architects, helped Nims with the project and isn’t surprised it’s getting some recognition.

“Buildings like this just have character that a lot of the new buildings today don’t have,” he says, in a remarkably frank admission for someone intimately familiar with the 21st century’s version of architecture. “It’s character that sometimes we can’t afford to do today.”

The fact that Nims hasn’t really downloaded an ultimate purpose for the building with all this abundant character is beside the point, he says. Like the British climber George Mallory who, when asked why he wanted to climb Mount Everest, said “Because it’s there,” Nims believes some things are just worth doing for the sake of it.

Asked how much the project to save the architectural gem from the wrecking ball has cost him so far, he smiles diplomatically as Garland is telling us that someday she’ll wish upon a star and wake up where the clouds are far behind her. “More than I thought it would,” he says. “But it’s clear in my mind I did the right thing.”

An inspector found mouse droppings in two areas, according to the inspection report. Read the document here.

Family reacts after Decatur woman is sentenced for attack that left McClain Conrad paralyzed and a "prisoner in his own body."

Police say a Charleston woman was killed in an Effingham crash; the driver of the other car involved was booked for DUI.

Police check the welfare of driver who stays parked too long at gas pump and find drugs when the car door opens.

Ex-teacher from Forsyth wanted in Nashville on rape, battery charges

A former McLean County Unit 5 teacher is wanted in Nashville on charges of sexual battery and rape.

The man accused her of stealing $200 from his truck, according to police.

A Decatur man needed 13 stitches to sew up wounds in his face after he told police his male roommate had slashed him with a razor blade or very sharp knife in January.

A former teacher who lives in Forsyth is facing new charges involving sexual violence against a minor in Tennessee.

Decatur man on parole for manufacturing meth is found with the drug, and digital scales, in his bedroom. Woman with a gun gets arrested, too.

Watch now: Central Illinois residents reflect on a year of life amid COVID-19

Watch now: Central Illinois residents reflect on a year of life amid COVID-19

2011 File Photo: The Texaco Station at 266 W. Main Street was opened to the public after four years of restoration work. It was just one of the locations open during the Heritage & Holly Historic Home Tour.