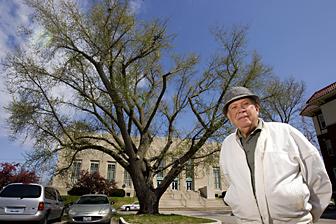 Herald & Review/Stephen Haas
Jack Evans stands in front of the ginkgo tree called the 'Assassination Tree' south of the Masonic Temple on West William Street in downtown Decatur. The tree gets its name because it was being planted on the day people learned Abraham Lincoln died. 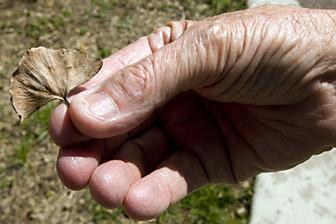 Evans holds a dried leaf from the ground around the 'Assassination Tree.'
TONY REID - H&RStaff Writer

DECATUR - Like almost every other subject under the sun, Abraham Lincoln knew a thing or two about trees.

The Railsplitter president even used one in the quotes that have come down to us like national family heirlooms: "Character is like a tree, and reputation like a shadow. The shadow is what we think of it; the tree is the real thing."

Honest Abe would have liked the ginkgo planted on the boulevard in the 200 block of West William Street in Decatur, just across the road from the Art Deco majesty of the Masonic Temple. Rising to a height of some 40 feet with writhing limbs twisting skywards out of a trunk measuring 15½ feet around, this real tree has got character to spare.

It's got something else, too: a strange name and roots that stretch back to April 15, 1865.

"This ginkgo has always been known as the 'Assassination Tree' " says Jack Evans, one of the tree's admirers. "A woman called Carrie Hostetler was planting the sapling outside her home when news of Lincoln's assassination arrived in Decatur around noon April 15, 1865, via telegraph."

As passers-by fanned out across the city to spread the grim tidings from Washington, D.C., Hostetler dropped her spade to talk with them. But clearly a woman not easily diverted, she eventually went back to her task and finished planting the tree before nightfall on that fateful day.

"Forever after that, the Hostetler family referred to the ginkgo as the 'Assassination Tree,' " says Evans, 83.

And that's how it's been incorporated into Decatur's collective memory, including a file mention of it in the Herald & Review's extensive archives. Not too many people remember the tree's name now, though., which is why Evans, prodded by the assassination's 144th anniversary, decided to write the newspaper a letter about it.

Readers of the letter might just happen to remember Evans himself. Together with his wife, Frances, they ran the Fixmasters Repair Service at 615 E. Wood St. for 38 years. The emporium was a one-stop solution for everything from broken battery-operated toys to toasters, vacuum cleaners and commercial pizza ovens in need of fixing. All that repair work probably gave Evans his admiration for old things that endure, like the ginkgo.

"Did you know there are only two still-living plants that survived the Ice Age, and one of them is the ginkgo?" says the retired fixer, who's been hitting the books. "They have found fossilized ginkgos that date back 270 million years."

That means there were ginkgos sheltering Jurassic Park-era dinosaurs under their spreading branches. When the dinosaurs bought it in some kind of global cataclysm more than 60 million years ago, ginkgos almost disappeared, but not quite. Although long thought be extinct in the West, European travelers rediscovered them in Japan in 1691. The trees had been spread there by seed from China, where they had clung on for millennia and never quite died out.

Prized as an ancient source of medicine and for their looks, shade and pretty leaves that drop all at once in the fall, ginkgos were reintroduced throughout the world and arrived in the New World in the late 1700s.

Evans got to know the story of the Assassination Tree while serving on the former Decatur Tree Board in the 1980s. The board launched a vigorous campaign of tree planting, and its efforts helped earn Decatur the "Tree City USA" honor from the National Arbor Day Foundation.

"I found out that the ginkgo is a pretty special tree, and very tough," Evans says.

So tough, in fact, that six of them survived the atomic bomb, dropped on Hiroshima, Japan, on Aug. 6, 1945. Some of those trees still have burn and blast marks on their gnarled trunks. The Japanese so revere them that when a Hiroshima temple demolished in the blast was rebuilt, its imposing stone steps were constructed to circle around the battered ginkgo outside, which wasn't to be disturbed.

Some ancient ginkgos are thought to be 3,000 years old and Evans believes it's high time the Decatur one got a little plaque recognizing its Lincoln heritage. "We've got all these Lincoln sites honored around town, but not many things are still alive from Lincoln's time like that tree," he adds.

While he's speaking, a man named Rick Gillum strolls up and introduces himself. He takes care of a historic home just down the street and became concerned when he saw people gathered next to the ginkgo and pointing at it. Unaware of its assassination background, he's grown to love the old tree and watches out for it.

"People don't always realize how trees have character," he says. "I like them, and I've kept an eye on this old one for years. Ginkgos aren't exactly common, you know; they're pretty rare."

Gillum, 60, likes the idea of honoring the Lincoln connection with a plaque. He just hopes that if there is some kind of ceremony or something, the dignitaries choose a nice, dry day. He explains that the olfactory characteristics of ginkgo leaves aren't among the tree's major assets.

"They drop early in the fall and, when they're wet, they smell just like dog ï¿½" explains Gillum, the last part of his sentence lost in a sudden susurration of the Assassination Tree leaves.

Mount Zion’s planning commission and zoning board of appeals voted on Tuesday to approve the subdivision of a property that will be the site of a future Dollar General.

Affidavit says she tries to make calls while being arrested.

Decatur woman charged with being driver for catalytic converter burglar

She is quoted as saying she got paid to be his wheels.

Victim tells police he was "belly-bumped" to the floor.

A 14-year-old juvenile was killed and three others persons injured in an early-morning shooting in Decatur, police said.

Heavy rains have left some Decatur roadways temporarily flooded as the city remains under a flash flood warning.

Accused batterer takes on girlfriend's rescuer and gets beaten up, police report

He stopped hitting her to fight him, and got the worst of it, affidavit says.

Police accuse woman of laying on couch to prevent being handcuffed.

Three weeks after a crash that killed two local students, IDOT has begun introducing changes to an Assumption intersection. But the city's mayor says there's more to be done.

Judge James Coryell ruled there was no probable cause to try Demario Reed.

Herald & Review/Stephen Haas
Jack Evans stands in front of the ginkgo tree called the 'Assassination Tree' south of the Masonic Temple on West William Street in downtown Decatur. The tree gets its name because it was being planted on the day people learned Abraham Lincoln died.

Evans holds a dried leaf from the ground around the 'Assassination Tree.'
© Copyright 2022 Herald & Review, 225 S. Main Street, No. 200, Decatur, IL 62523 | Terms of Use | Privacy Policy | Do Not Sell My Info | Cookie Preferences
Powered by BLOX Content Management System from TownNews.com.
You don't have any notifications.