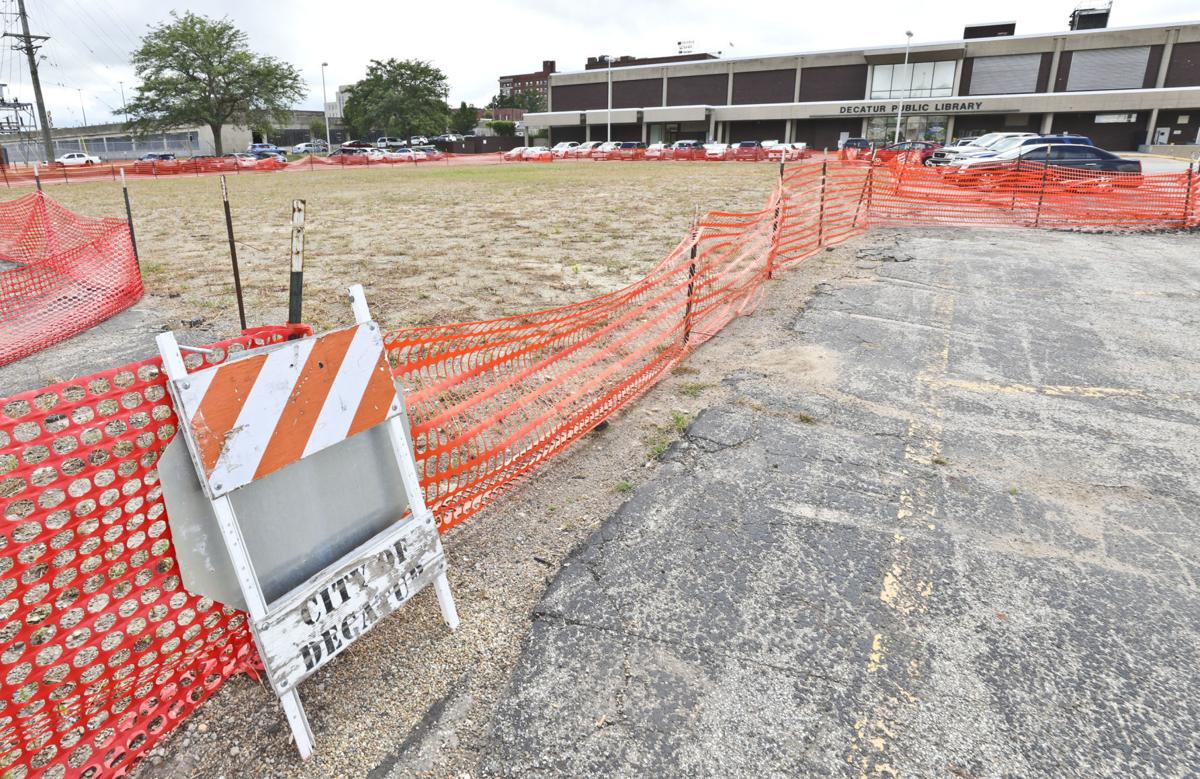 Orange fencing surrounds the grassy area where the Decatur Public Library annex once stood. The Decatur City Council voted to spend roughly $1 million on a new parking lot for the library that will include green space for hosting events. 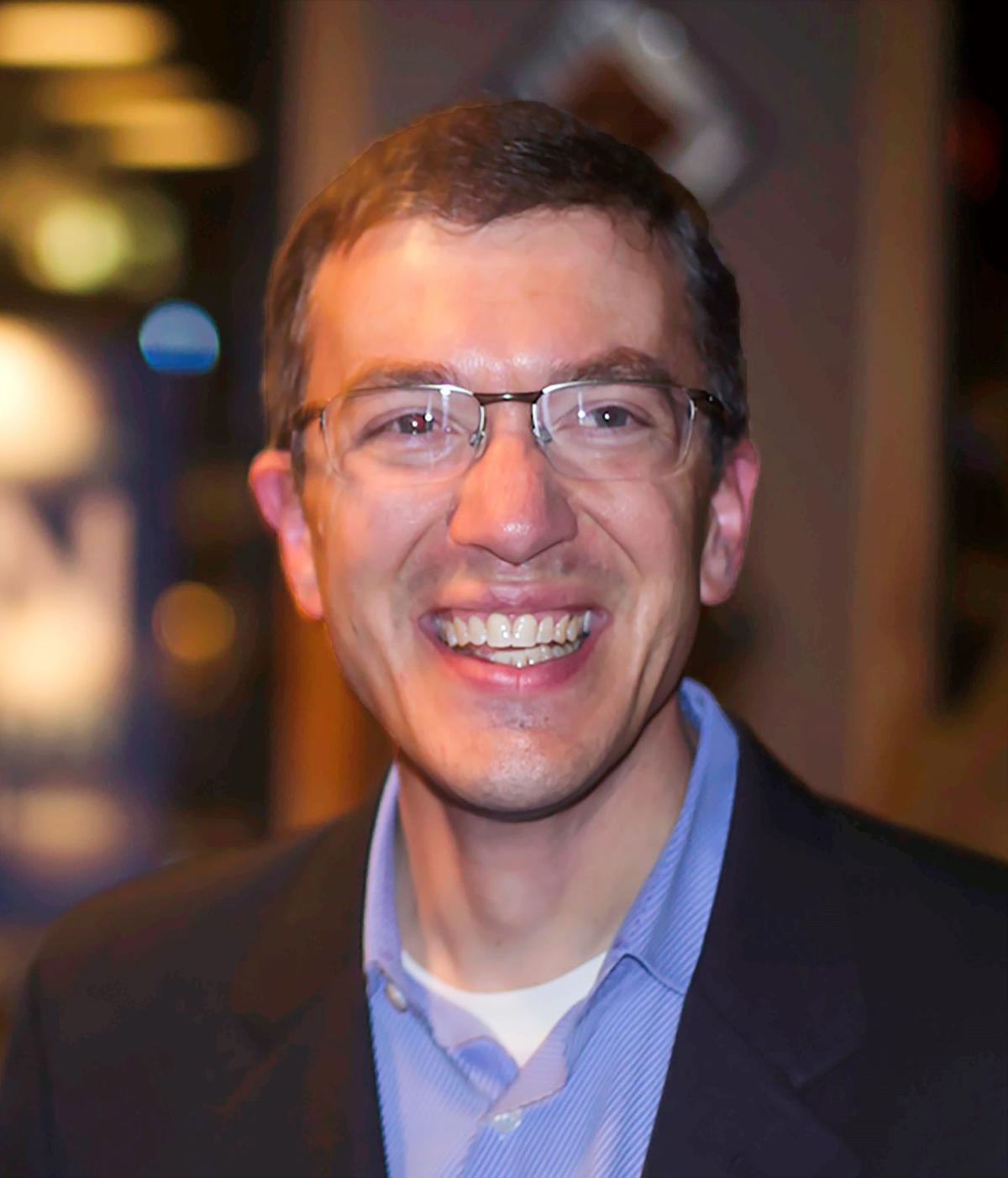 DECATUR — Construction will begin later this year on a new $1 million parking lot for Decatur Public Library, a vast improvement for patrons who have dealt with potholes and pavement cracks for years.

The design includes more green space, 96 parking stalls, 7 stalls for people with disabilities and 2 delivery spots. Christy-Foltz Inc., will begin work on the new lot after the Decatur Celebration, Aug. 2-4.

The Decatur City Council voted 6-1 to approve the project after previously considering several options that ranged from $400,000 to $1.3 million. In the end, the decision came down to the green space that city officials said would beautify the area and allow for outdoor events.

"The idea that the lot will include green space that could be utilized by organizations with the common goal of helping the environment is exciting," Councilman David Horn said.

Patrons and employees have waited years for the repairs. When the city of Decatur took ownership of the building at 130 N. Franklin St. in 2016, part of the agreement was that the aging parking lot would be fixed after council members decided what to do with the dilapidated two-story annex building.

The city demolished the mold-filled building, formerly known as the Village Mall, last year at a cost of $123,500. Orange fencing surrounds the grassy area where the annex once stood.

Council members were initially given three design options with varying prices in March, then presented with refined choices at a meeting in April. They selected an option estimated at $1.15 million that included green space and aesthetic tie-ins to the downtown streetscape, but opted to remove sidewalks on the east side as a way to save money. In April, the council authorized a $35,308 service agreement with Massie and Massie for design engineering of the lot. 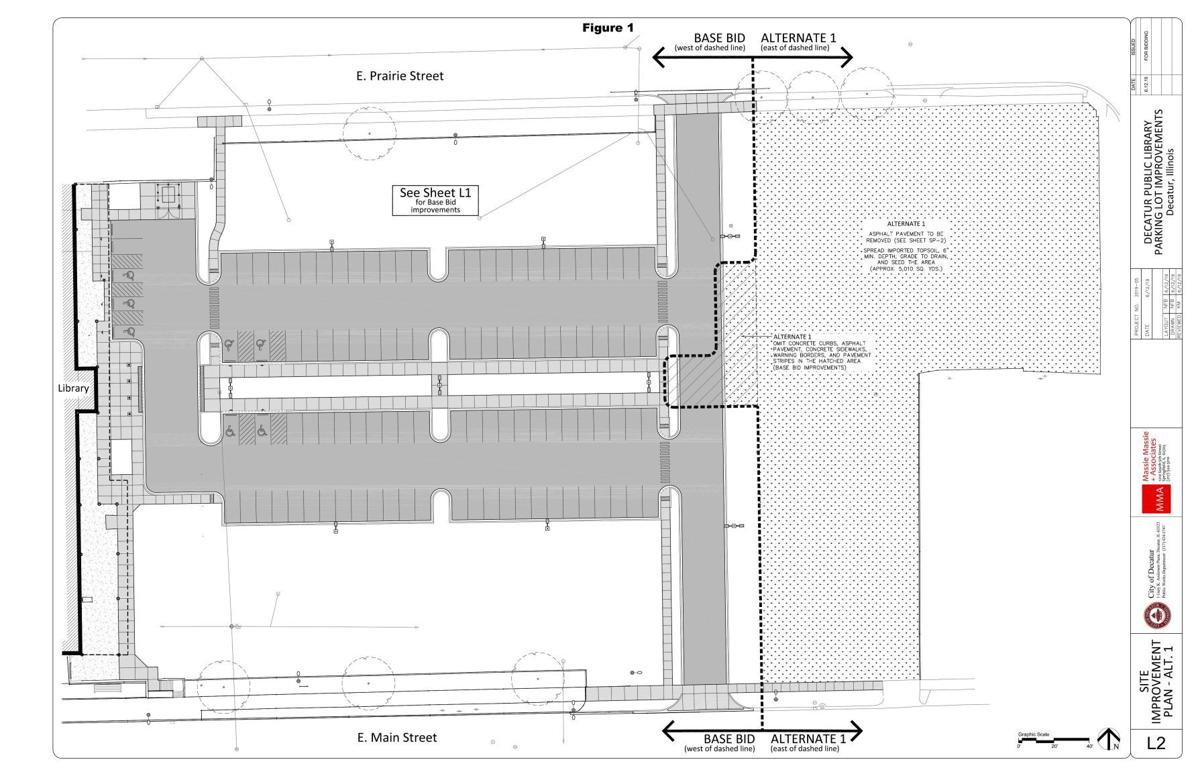 Bids for the project took place this month. Three contractors submitted bids and Christy-Foltz Inc., offered the lowest base cost for the project at just over $1 million, 13% lower than the engineer’s estimate for the project. With the addition of the turf, the total cost was $1,055,779.40. 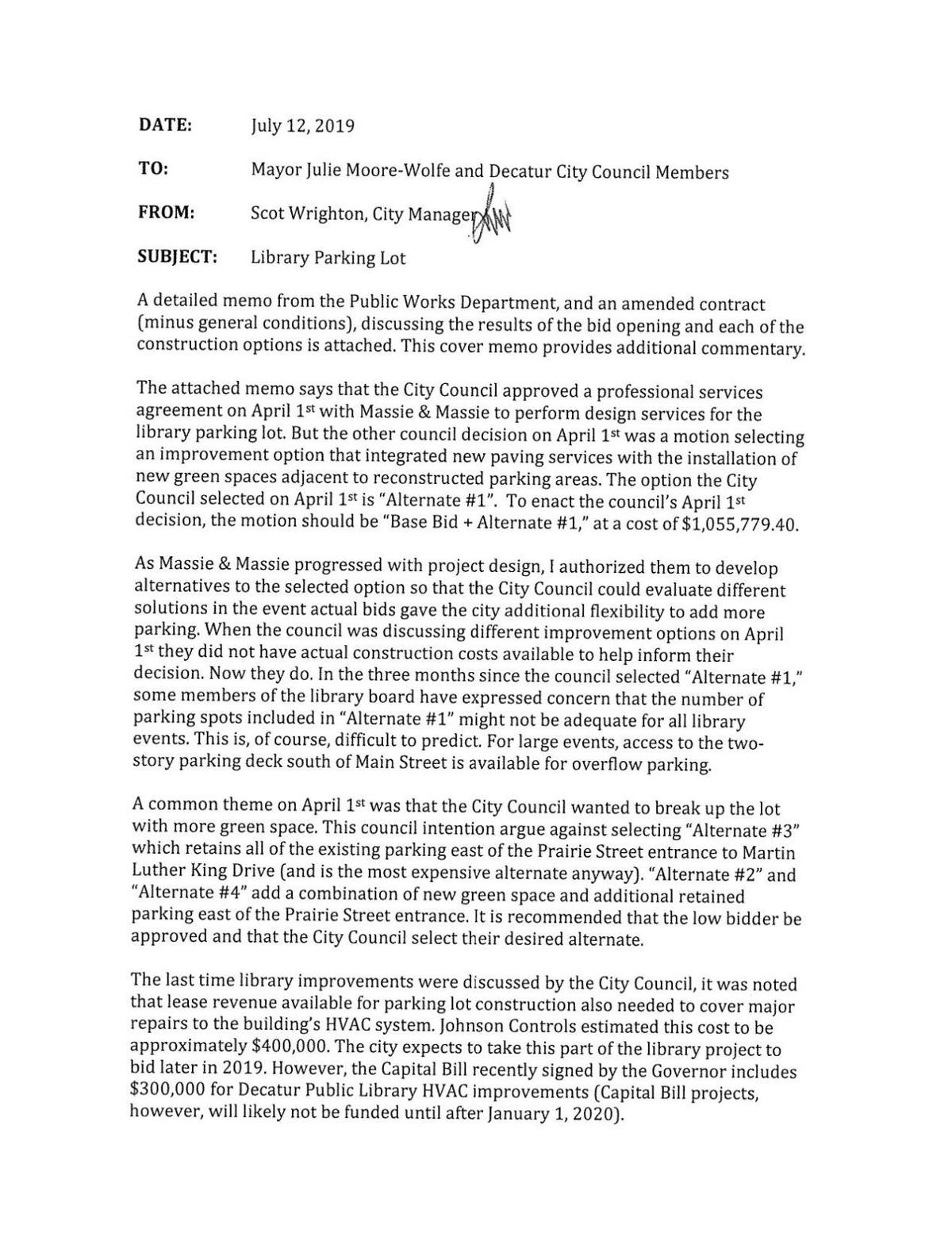 "I love the library, and yes, it is our responsibility to fix the lot," McDaniel said. "Spending a million dollars on a parking lot is not a responsible use of city dollars."

Some council members expressed concern for employees who will no longer be able to park in the lot. Assistant City Librarian Robert Edwards said there are roughly 50 employees, including maintenance. With the new design, council members said the library staff could use the parking garage at South Franklin and East Main.

"We need to make sure the library employees are taken care of," Kuhle said.

City Librarian Rick Meyer told the Herald & Review on Tuesday that he is excited to have an outdoor option for hosting activities and events for children and the community.

"It would be lovely to work with local organizations and nonprofits to incorporate things like a children's garden," Meyer said. "We will be able to host right in our backyard."

Read details of the Decatur Public Library parking lot proposals with this story at herald-review.com

DECATUR — Work to restore the Decatur Public Library’s pockmarked parking lot could begin this year, but city leaders are still deciding how t…

A business owner who has been critical of how the city council approved spending $1 million to overhaul the parking lot adjacent to her store may get a chance to buy some of the land.

Orange fencing surrounds the grassy area where the Decatur Public Library annex once stood. The Decatur City Council voted to spend roughly $1 million on a new parking lot for the library that will include green space for hosting events. 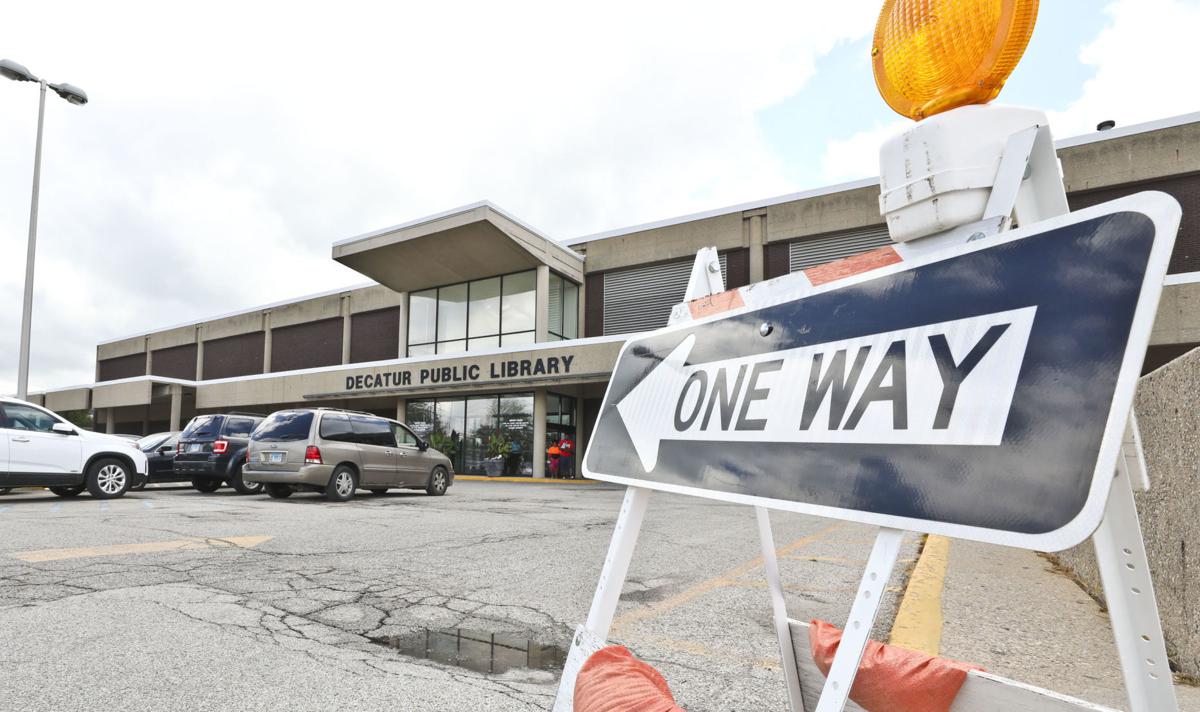 Despite patching efforts by the city, library patrons for years have navigated potholes and cracked pavement. 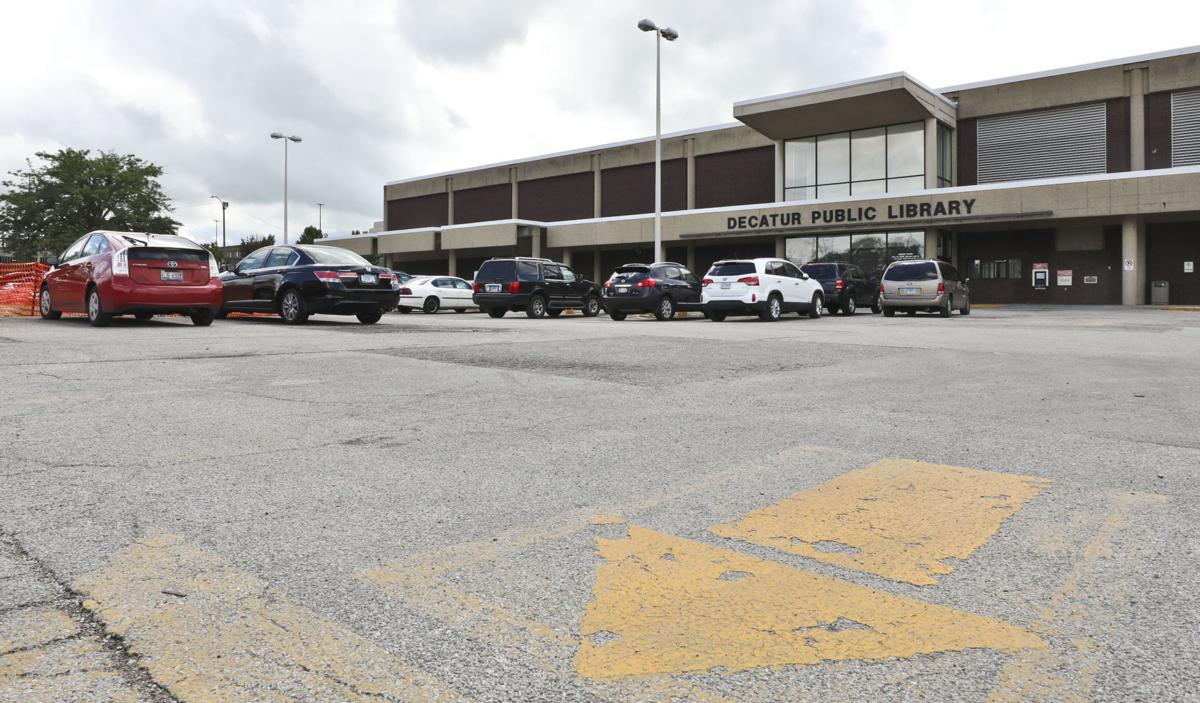 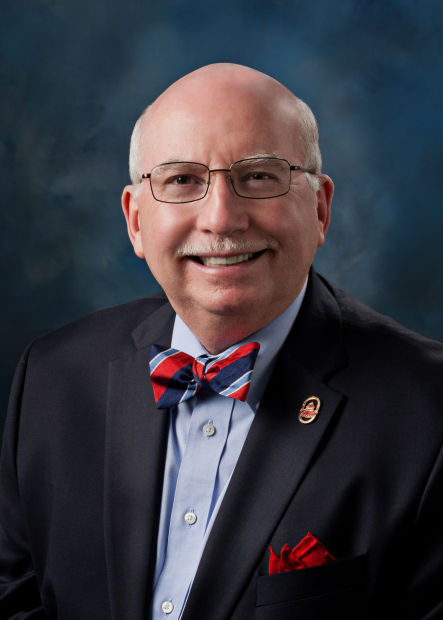