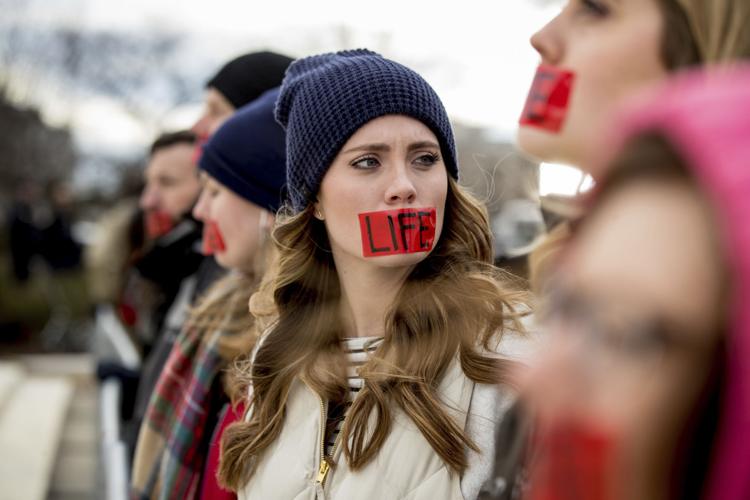 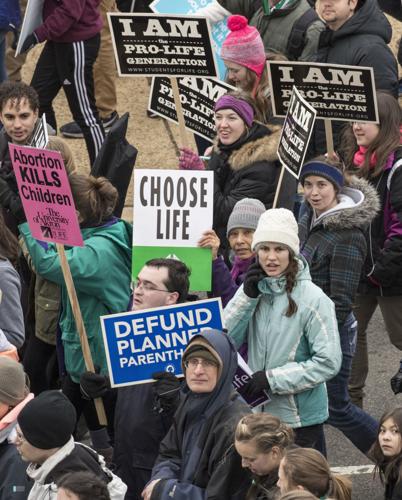 Anti-abortion demonstrators arrive on Capitol Hill in Washington during the March for Life.

The March for Life, held in Washington, D.C., one week after the inauguration of a president sympathetic to the pro-life cause, attracted the largest crowd in recent memory, including hundreds of marchers from Central Illinois.

Two members of the Trump administration spoke at the rally, including Vice President Mike Pence, the first vice president to speak at the annual event, held every year in the nation's capital to mark the anniversary of the 1973 Supreme Court decision, Roe v. Wade, legalizing abortion.

Pence, a longtime supporter of the anti-abortion movement, told cheering supporters gathered on the National Mall “life is winning again in America.”

“Along with you, we will not grow weary, we will not rest until we restore a culture of life in America for ourselves and our posterity," Pence said.

He told the crowd that President Donald Trump will announce next week a Supreme Court nominee in the anti-abortion jurisprudence of the late Antonin Scalia who “will uphold the God-given liberties enshrined in our Constitution.”

While Trump was not able to attend the rally, he expressed his support on Twitter.

“The March for Life is so important,” Trump said in a tweet on Friday. “To all of you marching --- you have my full support.”

The #MarchForLife is so important. To all of you marching --- you have my full support!

The march, which began in front of the Washington Monument, ended about two miles away, at the steps of the U.S. Supreme Court.

Counselor to the president Kellyanne Conway joined Pence in representing the Trump administration.

“Steps away from here in the White House a president and vice president sit at their desks and make decisions for a nation,” Conway said. “As they sit there, they stand here with you. This is a time of incredible promise for the pro-life, pro-adoption movement. Our actions must reach those women who face unplanned pregnancies, they should know they are not alone. They’re not judged. They’re protected and cared for and celebrated. So to the March for Life 2017 allow me to make it very clear -- we hear you, we see you, we respect you, and we look forward to working with you.”

Megan Rhoades, 37, a staff member of New Life Pregnancy Center in Decatur, said it was exciting to see the vice president at the rally.

“He said that the Trump administration stopped the (U.S.) funding of international abortions,” Rhoades said. “He talked a lot about his faith. He said he attended March for Life for the past 16 years.”

Joining the pro-life movement is a step in a gut-wrenching personal journey for Rhoades.

“I had an abortion in February 2005,” Rhoades said. “I was against abortion before I had the abortion.

I was probably very judgmental of women that had them. Then I found myself in the situation on an unplanned pregnancy. I was shocked to find how easy it was to go from being pro-life to walking into a Planned Parenthood clinic. I think it was from fear and panic and I felt trapped. I felt it was my only answer. It wasn't, but that was how I felt at the time.”

Rhoades was later converted to Christianity, which gave her a new perspective.

“I came to terms with what I'd done and understood how awful that was,” Rhoades said during a phone interview from her Washington hotel room, shortly after completing the march.

She visited New Life Pregnancy Center in 2007, signed on as a volunteer and was later hired as a staff member. She enrolled in a program for restoration to spiritual and emotional health. She learned about fetal development, how a baby grows during different stages.

“That was a wake-up call for me that it wasn't a clump of cells or a blob of tissue,” Rhoades said. “I knew I had to use what happened to me to help other women.”

Rhoades, who has spoken at churches and women's groups on her experiences, was attending her first public pro-life event Friday.

“Hearing Pence speak was really cool,” Rhoades said, adding that she especially enjoyed the speech of Mia Love, the first black Republican female U.S. representative. “She was amazing. She told how her parents came to America from Haiti and left her siblings at home. When they got here they got pregnant with her. It would have been easy for them to have an abortion, but they chose life.”

The Rev. Steve Arisman led a youth group to Washington, among about 200 people who rode in four buses from the Springfield Catholic Diocese, including Bishop Thomas John Paprocki.

They took part in a Mass on Thursday night, with about 15,000 worshipers, including four cardinals and about 50 bishops.

“It's such a joy to be here,” said Arisman, pastor of parishes in Mount Zion and Bethany. “There is so much energy to be here with the youth and share our faith. It's just inspiring.”

Arisman, 35, who was attending his fifth March for Life, said there was more excitement this year for several reasons, including the new administration.

“There is a different feeling in our nation right now,” Arisman said, adding that it was amazing to hear the crowd respond with joy to everything Pence was saying. “We all hope that the new administration sees life in a different light than the previous administration. We are here to unite behind life, from conception to natural death.

"We respond with joy, not with anger or riots. Our joy is in Jesus Christ.”

The priest said “the reactionary march” last week inspired the pro-life marchers to respond with more joy and love.

“People in D.C. were commenting that this is a more joyful and peaceful group than last week's march,” he said. “It was great seeing the joy in the young people standing for life. It gives us hope seeing all the Christians standing for life in a great way.”

Lucas Harmon, a freshman at Mount Zion High School, attended the march as part of the youth group, along with his grandparents and two cousins. He said he went to the march because he believes in the pro-life movement, “to make abortion illegal.”

He said he would like to see abortion prohibited because it is “like killing innocent babies who can't make the choice for themselves.”

Lucas said the event was fun for him, especially “just seeing everyone in my church and in my family walking with me.”

Jade Cothern, 35, a New Life Pregnancy Center volunteer, took two days off from her regular job to attend the march with Rhoades.

“It is exciting,” Cothern said. “I have never been to Washington, D.C., so it's kind of surreal, to see the White House and all the other places.”

She said the biggest highlight for her was sensing “the overwhelming presence of God.”

“There are so many people staying together choosing life,” Cothern said. “It was very empowering and uplifting that these brothers and sisters are believing the same things that I believe.”

She was inspired by an African-American minister who delivered the benediction.

“He talked about black lives, how most aborted babies are African-American babies. He was encouraging the men to stand up and be fathers and for the women not to choose abortion, to choose life.”

Cothern said she was 15 years old when she experienced an unplanned pregnancy.

“I ended up keeping my son. He's almost 19 now,” she said. “I chose life, and then God put it on my heart to go to the pregnancy center to help stand beside women and help them to decide to choose life.”

Thousand of people, including Vice President Mike Pence, gathered Friday for the annual March for Life in Washington, D.C.

Anti-abortion demonstrators arrive on Capitol Hill in Washington during the March for Life. 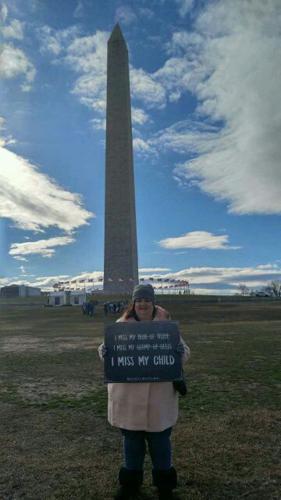 Megan Rhoades, 37, a staff member of New Life Pregnancy Center in Decatur, holds a sign in front of the Washington Monument at the March for Life in Washington, D.C.