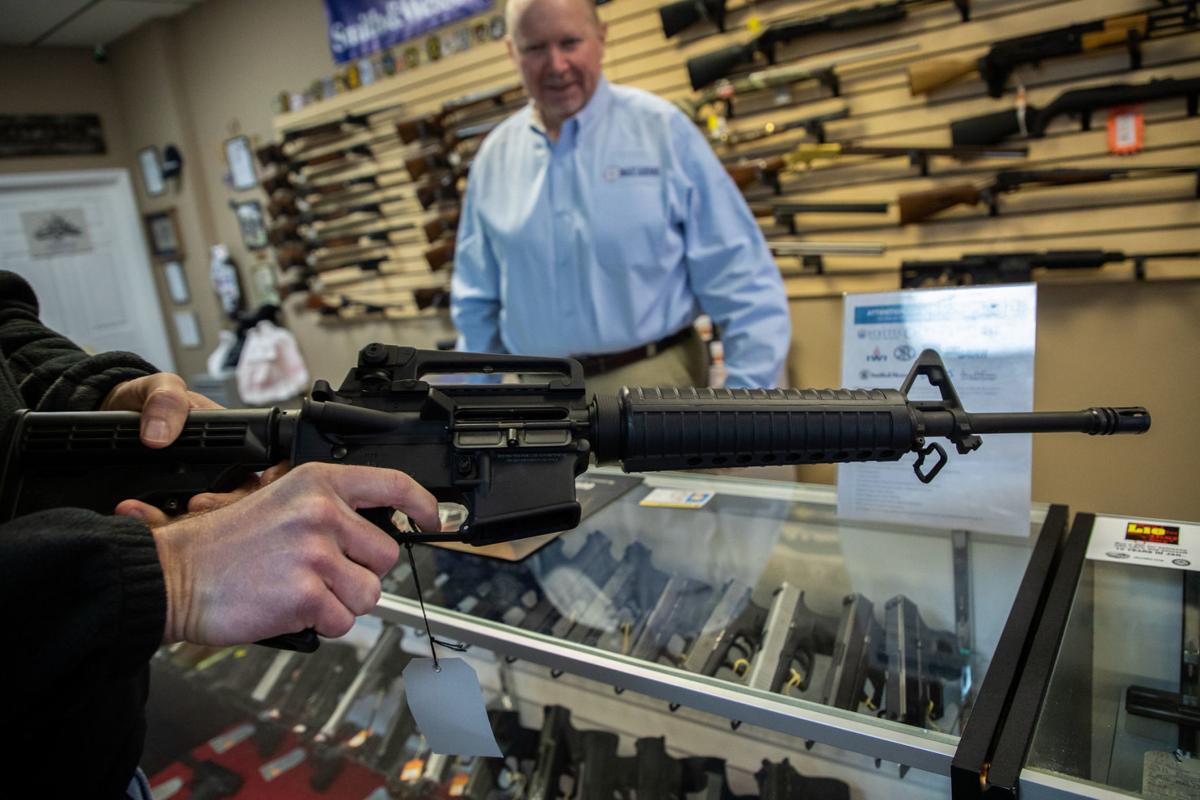 Paul Becvar examines a Rock River AR-15-style rifle he is purchasing at Bat Arms in Plano on Thursday. 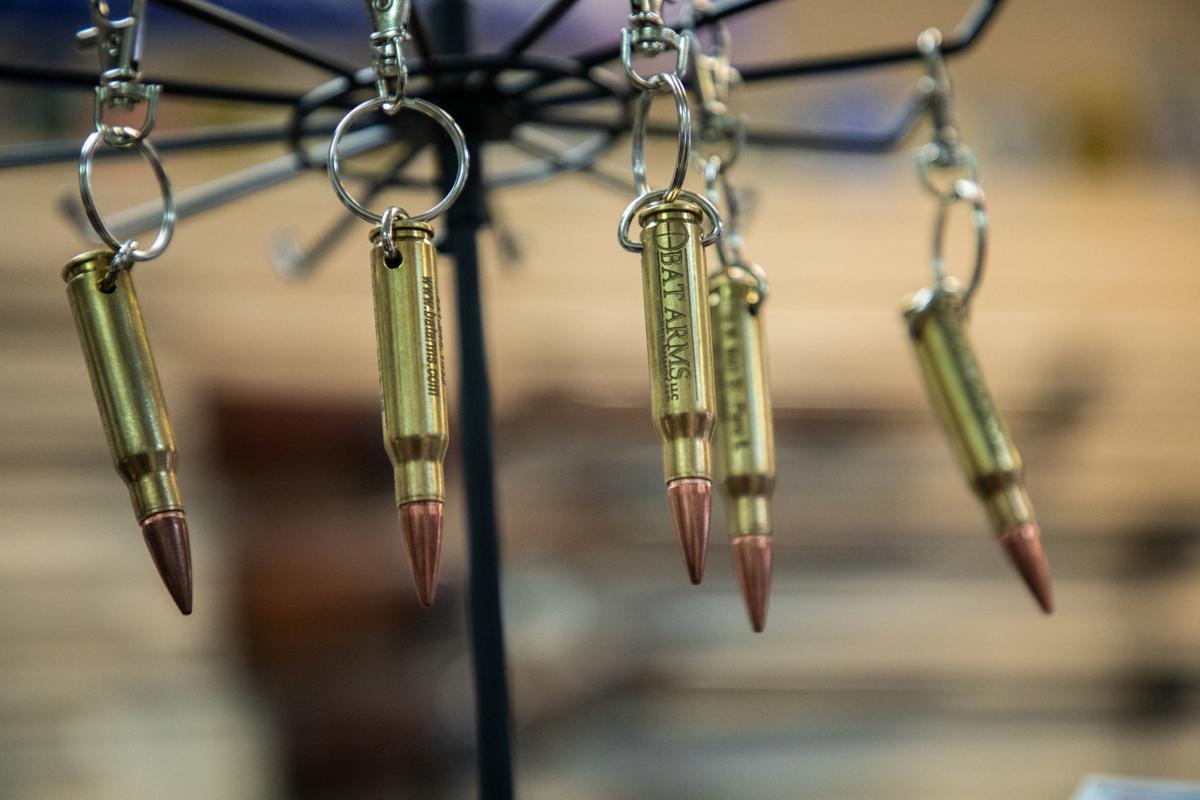 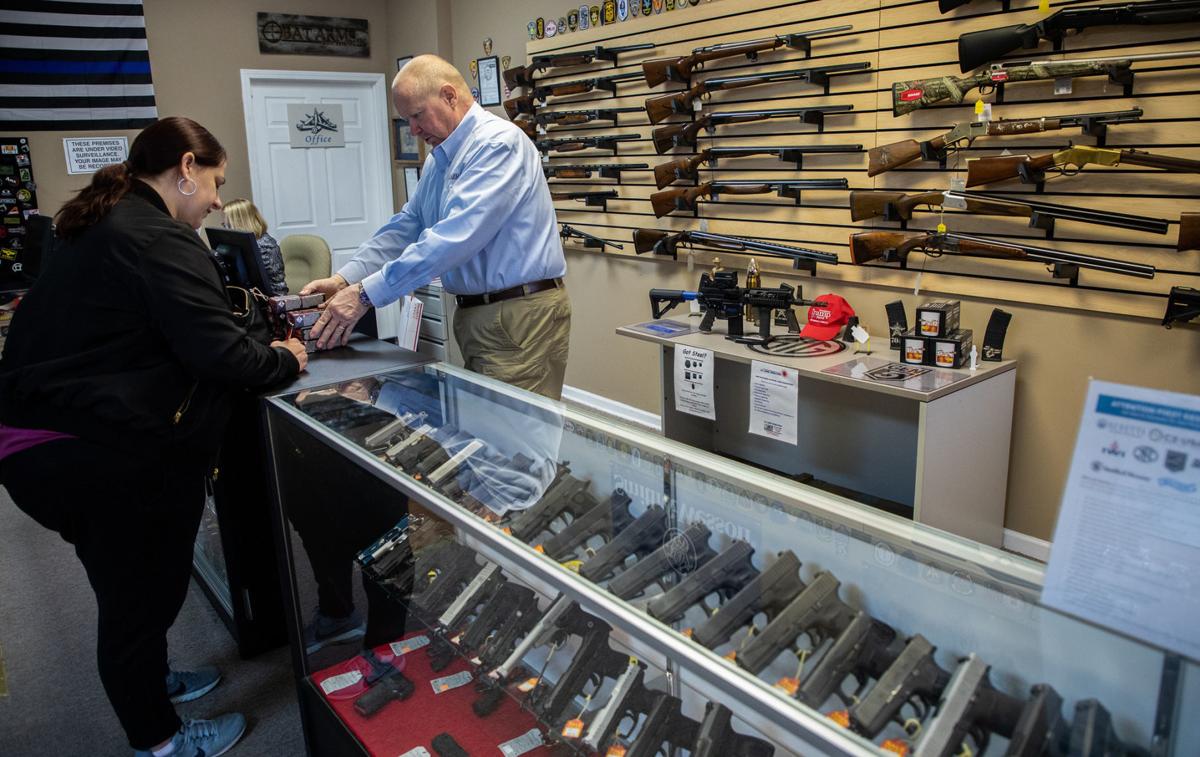 Krystin Dellaca, from Oswego, buys ammunition from Barry Torphy, owner of the Bat Arms gun store, on March 18, 2020, in Plano. 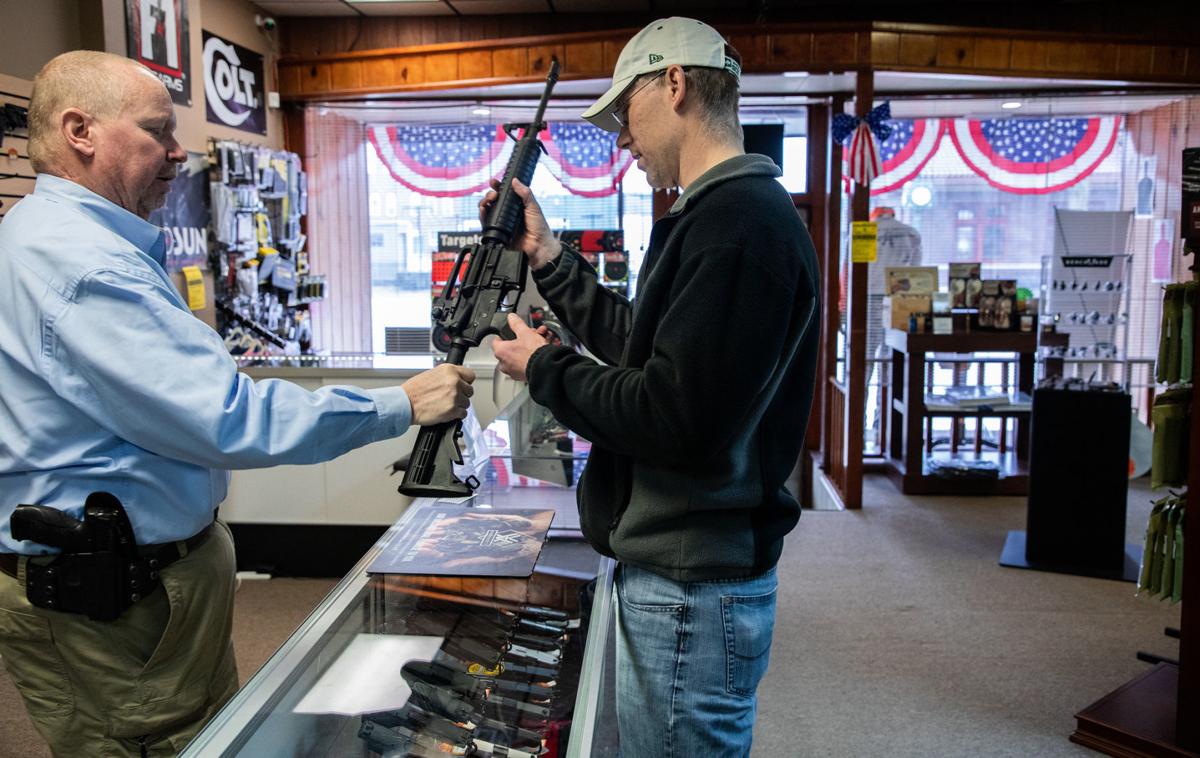 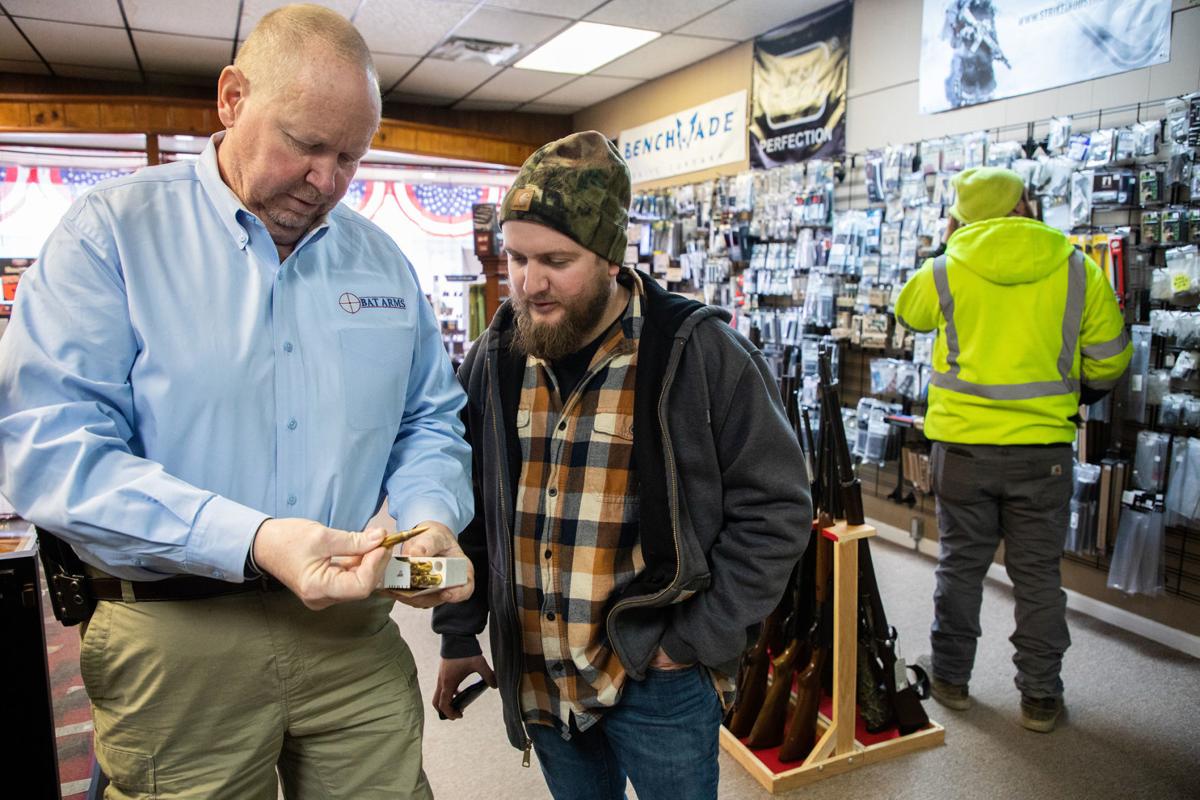 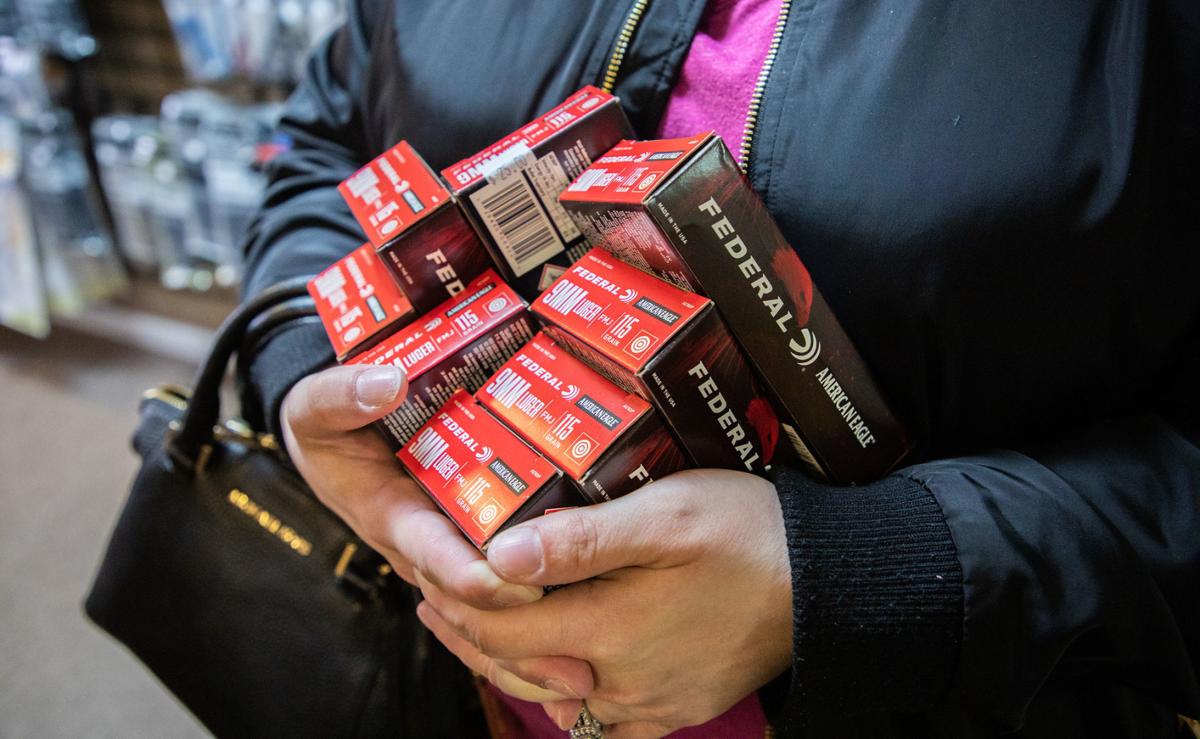 Krystin Dellaca, from Oswego, buys ammunition March 18, 2020, at Bat Arms in Plano. Owner Barry Torphy said he\u2019s seen a significant uptick in sales of both firearms and ammunition during the coronavirus crisis.

SPRINGFIELD — Toilet paper and hand sanitizer are in short supply at Illinois supermarkets. Firearms and ammunition are flying off the shelves at gun shops, too.

As the outbreak of novel coronavirus disease spreads through the state and the country, Illinois firearms retailers say sales of guns and ammunition have substantially increased over the past two weeks and especially in recent days.

In order to buy a gun in Illinois, residents must first be licensed with a Firearm Owners Identification card, which requires a background check. And every gun they buy requires a Firearms Transfer Inquiry Program request.

A spokesperson for Illinois State Police, which facilitates both processes, said the agency’s Firearms Services Bureau “has experienced a high volume” since last Friday, receiving 18,980 in the six-day span.

A retired nurse with history of respiratory issues is confirmed as state’s first coronavirus fatality. But relatives don’t know how she contracted it.

Feagans said his shop started getting busy Monday, on the eve of Illinois restaurants and bars closing to dine-in customers and schools shutting their doors to students.

“I think … all of a sudden people realized, ‘Hey, this is serious,’” he said. “Everybody's talking long term now. So now I think people are starting to get a little bit more panicky.”

Gun shops across the U.S. and in every corner of Illinois have seen firearm and ammunition sales increase, says Richard Pearson, executive director of the Illinois State Rifle Association. He said most purchases have been related to home protection.

Feagans said purchases of handguns, common for home protection, have gone up the most, along with ammunition. He also noted his recent clientele has included an unusual number of first-time buyers.

“We are trying to keep up with customers,” said Dan Eldridge, owner of Maxon Shooter’s Supplies and Indoor Range in Des Plaines. "There were no limits for ammunition. Most common calibers are gone, but we are being resupplied.”

On Monday, the gun retailer capped the amount of ammunition customers can purchase to no more than 300 rounds on all calibers.

“It’s so we don’t run out. We want to have some for range users," Eldridge said.

In addition to gun sales, Maxon has a shooting range, which was busy over the weekend as well, Eldridge said.

On Wednesday, Maxon shortened its hours of operation, opening an hour later and closing an hour early to give employees time to restock on products and clean the store.

In Plano, Barry Torphy, owner of Bat Arms, said he’s seen a significant uptick in sales of both firearms and ammunition.

Most people are buying 9 mm. The next most popular caliber is .233 Remington, which is used for rifles. "Between those two they have been our major sellers,” Torphy said.

The Illinois State Police have 30 days to approve or deny the applications. The state was unable to provide information on how many applications have been received in the past year.

Gun store owners say that even before the COVID-19 pandemic, the state had a backlog of applications waiting to be processed. On Jan. 31, the Illinois State Rifle Association and the Second Amendment Foundation filed a lawsuit in federal court against the State Police, alleging that delays in processing the applications were infringing on the right to bear arms.

State records 128 new coronavirus cases in one day; Number of known cases jumps to 288 as governor says ‘no place, no person, is immune’

The number of confirmed cases of novel coronavirus, COVID-19, in Illinois almost doubled overnight, from 160 cases to 288, the state’s Department of Public Health announced Wednesday.

Next week’s legislative session is canceled and, like nearly all routines amid the COVID-19 pandemic, it is unclear when its schedule will return to normalcy.

THURSDAY UPDATE: The latest on coronavirus and Central Illinois

A look at developments with coronavirus and Central Illinois. Check back for updates throughout the day.

As the world shuts itself in at home in an effort to quell the spread of the new coronavirus, what if your greatest danger lives there with you?

A 71-year-old woman being treated for COVID-19 has died at Memorial Medical Center in Springfield, authorities said Thursday. She is the first death in the area caused by a confirmed case of the coronavirus.

Gov. J.B. Pritzker and health officials say three more people in Illinois have died from COVID-19 and the number of cases has risen to 422.

Mount Zion superintendent: 'strong probability that this crisis will continue into the weeks and months ahead'

Trump's call with governors shows confusion in US virus fight

President Donald Trump's video conference with state governors on Thursday was meant to highlight coordination among the nation's top elected officials as they fight the coronavirus outbreak. Instead, it illustrated their differences.

The leader of the Illinois Health and Hospital Association asked other industries to donate masks, gloves, gowns and other personal protective equipment to the more than 200 hospitals across the state as they treat patients for the novel coronavirus disease, COVID-19.

Gov. J.B. Pritzker is announcing a "stay-at-home" order for the state of Illinois to prevent the spread of COVID-19. People can still go to grocery stores, pharmacies and medical offices and gas stations.

Paul Becvar examines a Rock River AR-15-style rifle he is purchasing at Bat Arms in Plano on Thursday.

Krystin Dellaca, from Oswego, buys ammunition from Barry Torphy, owner of the Bat Arms gun store, on March 18, 2020, in Plano.

Krystin Dellaca, from Oswego, buys ammunition March 18, 2020, at Bat Arms in Plano. Owner Barry Torphy said he\u2019s seen a significant uptick in sales of both firearms and ammunition during the coronavirus crisis.