DECATUR — City officials on Monday said $1.8 million of work on 3.32 miles of Decatur streets will likely be finished in September after the city council approved a bid from Dunn Company to carry out the project as a contractor.

With the exception of Councilman Rodney Walker, who was absent Monday, the council voted 6-0 to enter an agreement with the Decatur contractor. The road work is primarily funded by money collected by the city's local motor fuel tax, which is 5 cents on each gallon of unleaded fuel and 1 cent per gallon of diesel fuel.

"The bulk of the project is working on Wood Street between Jasper and 22nd Street," said public works Director Matt Newell. "Portions of it are to be closed (because) we're replacing water service on that stretch of road."

In addition to those roadways, crews will replace a median with a left turn lane at the intersection of North Martin Luther King Jr. Drive and East King Street. Miscellaneous streets have also been selected for concrete and asphalt patching, and work on sidewalk curb ramps, gutters and catch basins.

Newell said Wood Street is considered a "collector street," which is a major street in the city that collects traffic from houses and directs it to the city's key thoroughfares. There likely won't be a need for marked detours on Wood during the construction, he said, but residents will be notified of the closures.

"Ninety percent of the traffic there is from local people who live around Wood street or use it on a daily basis," Newell said. "In those instances, we don't need to put up a marked detour."

Looking toward the next few years of the city's annual street improvements, Newell said number of streets they can repair and the options they'll have to fix the streets will be reduced due to a decrease in local fuel tax funding.

The funding decrease stems from a $7.5 million loan that the council authorized in 2016 to boost the road improvement program being spent.

A memo provided to council members before the May 6 council meeting shows that motor fuel tax funding for the 2020 fiscal year is expected to decrease from $1.5 million to $1 million. That number will likely decrease again to $600,000 in the 2021, 2022 and 2023 fiscal years.

Newell said that it will be up to the city council to determine if other funds will be used for street repairs when the funding is reduced.

He also said the city can still use the state motor fuel tax for some road and bridge projects, and said that tax will likely provide additional funds due to tax doubling from 19 cents to 38 cents per gallon starting July 1.

In other business Monday, the city council voted 6-0 to extend its contract with MV Transportation to manage the Decatur Public Transit System. The Dallas-based company has managed the operations and employees of the transit system since 2014.

The original five-year contract expires at the end of June, but City Manager Scot Wrighton said staff felt that it would be "practical" to extend the contract for no more than 18 months due to leadership transitions in the city government and other variables, such as the potential impact that the city's neighborhood revitalization project could have on bus routes, among others.

Those variables should be resolved before entering a long-term contract with a management company, Wrighton said.

Nanette Ruffin, president of Amalgamated Transit Union Local 859, addressed the council before the vote to state that the union would support the extension of MV's contract as long as the city works to address problems that the city's bus operators have with the company.

Speaking before the meeting, Ruffin said those problems include issues with payroll and incorrect paid time off accruals.

She said she met with Wrighton and transit Administrator John Williams before the contract extension was brought to the council for a vote, and was assured that the city would look into the issues and work to get them fixed.

"That's all we really wanted," Ruffin said. "... If those problems aren't corrected, I'm going to be back up there (at the council chambers)."

The city council also voted 4-1, with one abstention, to approve an action plan devised by city staffers to help guide them in carrying out the long-term watershed management of Lake Decatur and to reduce silt and nitrate levels in the lake. 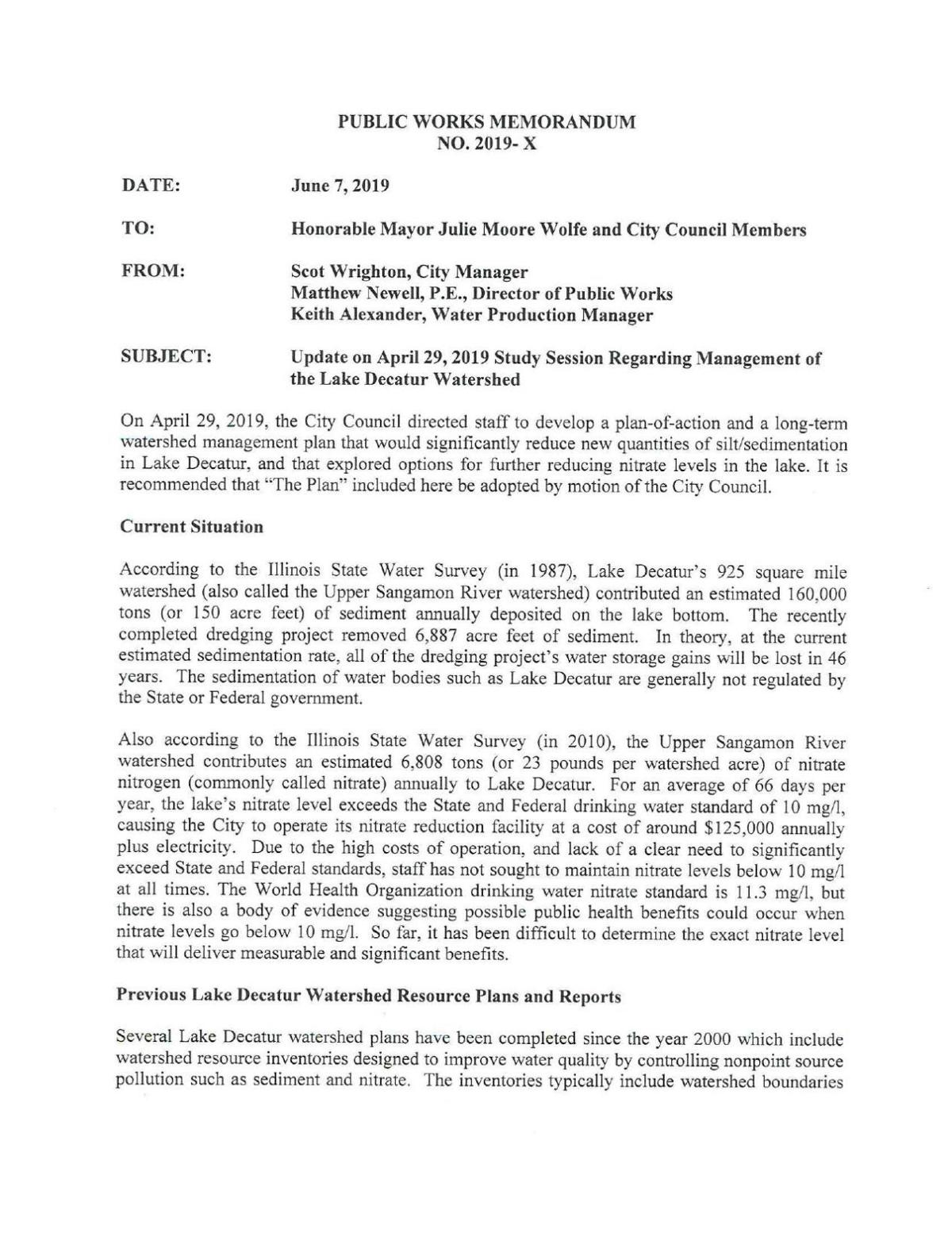 City staffers were tasked with putting the plan together after an April 29 study session that largely discussed how the lake's siltation levels could be kept low after the city's $91 million dredge project finished last year.

The action plan tasks city staffers with measuring and sampling silt and nitrate levels in Lake Decatur to set a baseline "to measure the effectiveness of various sediment and nitrate reduction strategies."

It also recommends recruiting a consultant to help guide the city on various watershed management issues, including determining what services would be better off performed by city staff than other organizations and suggesting how much funding should be dedicated to siltation and nitrate level reduction.

Councilman Bill Faber voted "no" on approving the plan Monday, saying that while he was impressed with the amount of effort staff put into it, he felt that he didn't have enough information to make a complete assessment on whether the city should adopt it.

Councilman David Horn abstained from the vote, saying that he was supportive of all of the plan's aspects except for the fact that it calls for the city to end its funding partnership with the Agricultural Watershed Institute.

The city has provided the nonprofit AWI with $62,500 annually for watershed conservation, education and research services, with a strong focus on developing a market for perennial crops in the area.

Wrighton said that while the city does not dispute the value of AWI's work, it doesn't contribute significantly to the reduction of siltation and nitrate levels. AWI has also said that it wouldn't be interested in partnering with the city anymore if perennial crop market development wasn't a part of the funding.

Steve John, executive director of AWI, called perennials "the most promising path to major sediment and nutrient reduction" in the lake's watershed. He disagreed with a statement made in the city council packet saying that market development is AWI's main focus of an agreement between it and the city.

"That's not quite accurate," John told the council. "Market development is both a challenge and an opportunity. Markets are necessary in order to gain farmer adoption of perennial crops ... Our main focus is on the water, soil, wildlife and climate benefits of deep-rooted perennial grasses."

Read the Decatur City Council packet with this story at herald-review.com.

Lincoln Homestead is seeking $27,000 for restoration efforts. Here's how you can help.

HARRISTOWN — The Friends of Lincoln Trail Homestead and Memorial are seeking the public's help securing a grant that could provide up to $27,0…

TAYLORVILLE — The state's new budget includes $500,000 for relief efforts in Taylorville in the aftermath of the destructive tornado that stru…

A major Decatur sewer, dating back to 1930, needs repairs. Here's how the city plans to fix it.

DECATUR — Residents as early as next year could see changes such as sidewalk replacement, targeted demolition and more public street lighting …