SPRINGFIELD — A 64-year-old Army veteran has been charged with leaving a profanity-filled voicemail message at the Decatur office of U.S. Rep. Rodney Davis, R-Taylorville, and threatening to shoot the lawmaker,  federal officials said.

Contacted at his home Friday, Tarr said he saw a television ad in which Davis claimed that Ukraine, not Russia, was responsible for meddling in the 2016 U.S. elections, and it angered him enough to call.

"I said I had been a sharpshooter in the Army. I didn't realize I said anything about shooting him. I might have. I don't even own a weapon," Tarr told The Associated Press. "I wish I could just take it all back and just say he's a lousy (expletive) for backing the Russian theory."

U.S. Attorney John C. Millhiser in a statement said the affidavit filed in support of the criminal complaint alleges Tarr left the voicemail message on Nov. 25. According to the affidavit, the voicemail was forwarded to U.S. Capitol Police in Washington, D.C.

According to an affidavit, the caller berated Davis for "backing the Russians over our own intelligence" and adding, "I'm a sharpshooter. I could, I'd like to shoot your (expletive) head off."

U.S. Rep. Rodney Davis on impeachment: 'A sad day for the future of our country'

Through caller ID, police identified Tarr as the alleged caller and U.S. Capitol Police contacted the Rochester Police Department to ask officers to make contact with Tarr. Rochester police officers made initial contact with Tarr on Nov. 25 at his residence.

FBI agents interviewed Tarr and say he admitted making the call because the commercial angered him.

"I screwed up," Tarr said. "I don't even have a weapon to do it, is the silliest thing." 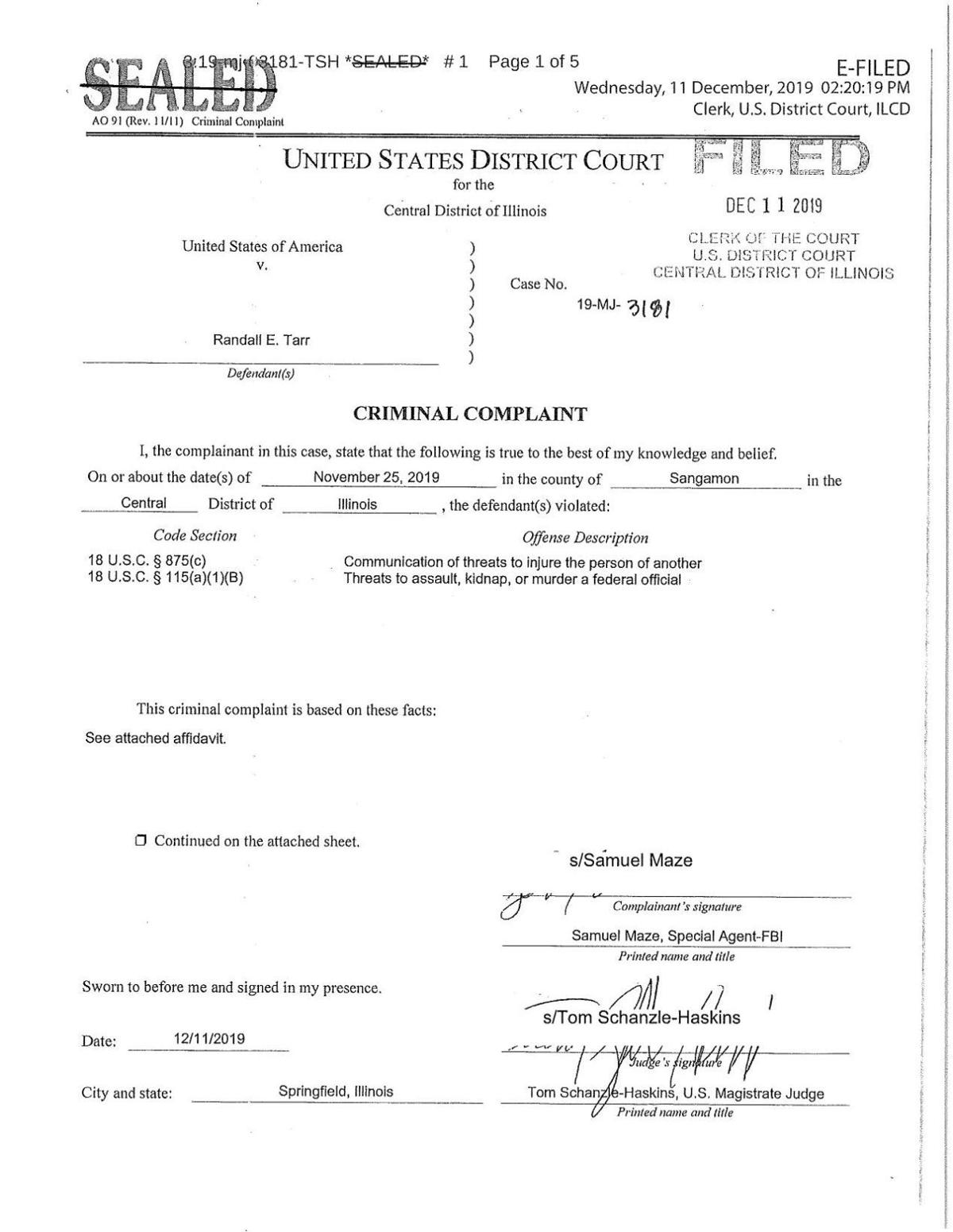 Ashley Phelps, communications director for Davis, said in a statement that the congressman is grateful for the work of law enforcement who help keep him, his staff and constituents safe.

"After the shooting on the baseball field two years ago, our office takes every threat seriously," she said. "We are letting law enforcement handle the situation from here."

Davis was on a ball field practicing with the congressional baseball team Alexandria, Virginia, on June 24, 2017, when a man from Illinois opened fire on the players, seriously wounding House Majority Whip Steve Scalise of Louisiana and three others.

During a hearing Thursday in Springfield, U.S. Magistrate Judge Tom Schanzle-Haskins appointed a federal public defender to represent Tarr for purposes of determining bond. Tarr was later released from custody under conditions, including home detention and location monitoring; prohibited contact with any victims and witnesses; prohibited consumption of alcohol; and that Tarr cooperate in drug and alcohol screening and mental health evaluation.

Rodney Davis at CIRA I

How will they count Macon County, Decatur residents during the census? First meeting laid the groundwork for crucial count

A committee of county and city leaders met Tuesday to continue laying the groundwork for getting the most accurate population count possible during the upcoming U.S. Census.

How will Decatur-area employers handle workers who smoke marijuana? A look at the legal issues surrounding cannabis.

Despite long lines at dispensaries and product shortages, there’s one major aspect of Illinois legalizing recreational pot this month that remains hazy.

Citing actions that have “shaken the trust in local government,” Piatt County Democratic party leaders are seeking the resignation of the county board chairman following his indictment on felony charges.

Here is a list of Central Illinois delegates pledged to presidential candidates running in the March 17 primary.

How will they count Macon County, Decatur residents during the census? First meeting laid the groundwork for crucial count

A committee of county and city leaders met Tuesday to continue laying the groundwork for getting the most accurate population count possible during the upcoming U.S. Census.