DECATUR — The Macon County Republican Party announced Monday it will not only ask for a full recount of the results of the sheriff’s race, but that it wants its candidate Jim Root to be declared the elected sheriff.

In a letter sent to the Macon County Clerk's Office and obtained by the Herald & Review, the GOP is asking for the clerk, the local election authority, to reverse the Nov. 6 results that saw Democrat Tony Brown defeat Root by a single vote, 19,655 to 19,654.

During Friday’s discovery recount, when Root and the Republicans were allowed to review up to 25 percent of Macon County’s 72 precincts, two uncounted ballots for Root were discovered in a Hickory Point precinct. 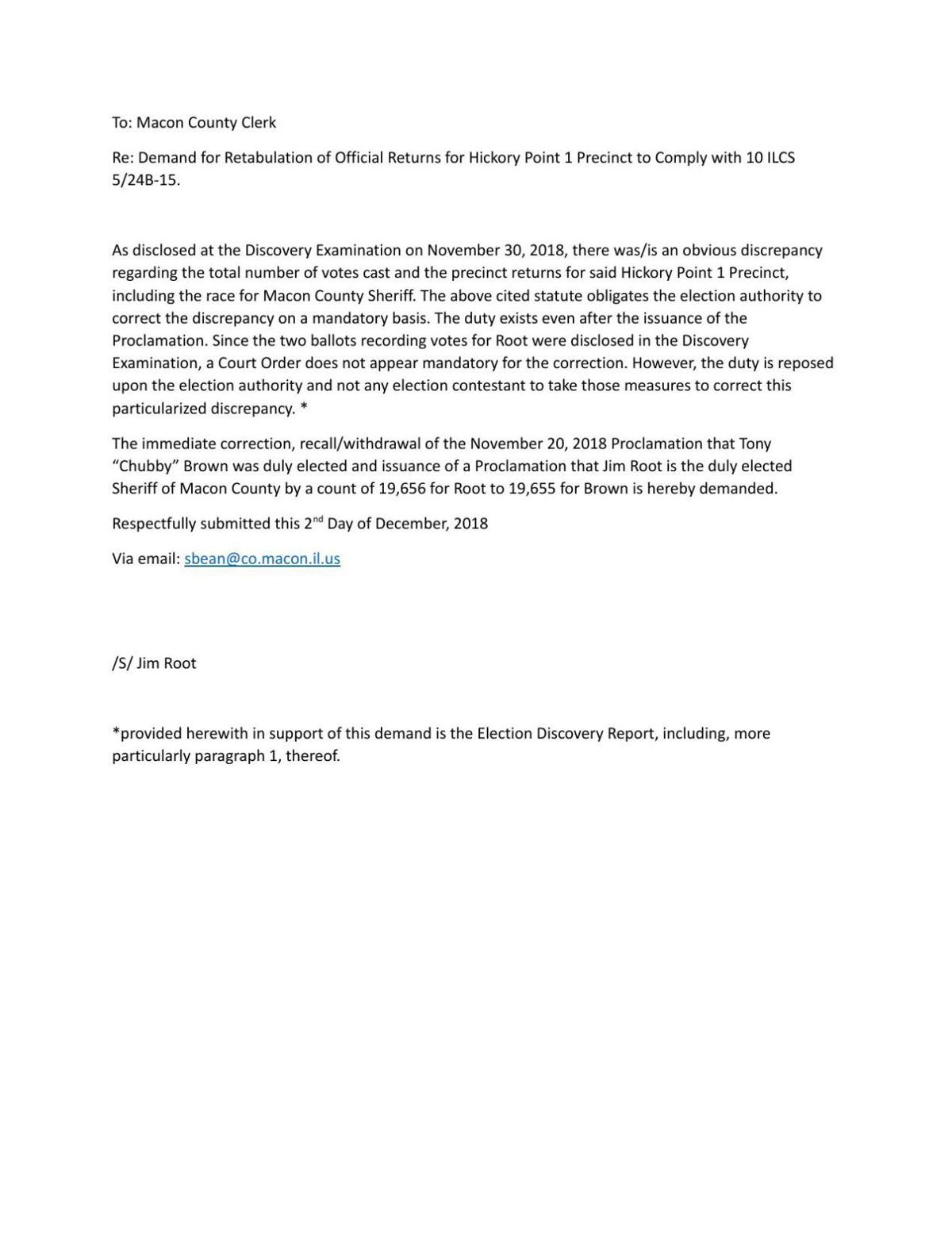 Root, who said he was aware of the letter, declined to comment when reached by text Monday afternoon.

Brown, who was sworn in as sheriff on Friday, said after Monday night's county board meeting that, in his view, the election is over. Unless the courts say otherwise, Brown said he is focused on being sheriff and working to bring the department together for the betterment of the community.

"I'm not concerned about all this stuff right now," Brown said.

Macon County Republican Party Chairman Bruce Pillsbury confirmed the validity of the request and said with the evidence gathered during Friday’s discovery request, Root should be declared the actual winner of the race.

“If anything, that proclamation should be recalled,” Pillsbury said, referring to the announcement that Brown was the official winner and his subsequent swearing-in as sheriff to replace Howard Buffett.

Monday’s news comes less than 72 hours since Root and the Republicans conducted a discovery recount at the clerk's office, when evidence can be gathered for a potential request for a full recount, which must be filed in Macon County Circuit Court.

How the two ballots for Root went uncounted on election night was a mystery to then-Clerk Steve Bean.

He said Friday that the ballots were discovered a few days after the Nov. 6 election among the “spoiled ballots,” or those ballots deemed invalid, with a note that said they should be counted. On election night, Root initially had a 99-vote lead. On Nov. 20, provisional and mail-in ballots were added, and Brown received a 1-vote margin of victory.

Bean said Friday he could not get an answer from the election judges about the note or why the ballots were not counted on election night.

Local and state officials have previously said it would be up to the court to change the results of the election. But the Republican request cites a part of the Illinois Election Code that covers how ballots are retabulated as evidence for why the results should be reversed without the need for a court order.

Macon County State’s Attorney Jay Scott said after Monday night's county board meeting that his office had not yet finished their review of the request.

Macon County Clerk Josh Tanner, whose first day in office was Monday, said he is aware of the request and was waiting for advice from Scott’s office on how to proceed.

Macon County sheriff's race: How we got here

THE BACKGROUND: Election Day on Nov. 6 ended with Republican Jim Root having a 99-vote advantage over Democrat Tony Brown.

2 MISSING BALLOTS:  Two ballots, both for Root, were found days after the election with "spoiled ballots," or those that election judges deemed invalid. With those two ballots were a note that said they should be counted, but then-Clerk Steve Bean said he never got an answer why they were not counted on election night.

WHAT HAPPENED RECENTLY: Brown was formally sworn in as sheriff on Friday afternoon. Friday also saw a discovery recount, which allowed Root and Republicans to review a portion of the total ballots from Macon County's 72 precincts to gather evidence in case they petitioned the Macon County Circuit Court for a full recount. It was here the two uncounted ballots were formally identified by Republicans, who announced that evening they planned to seek a full recount.

On Monday, Republicans said they still want a full recount and that Root should be declared sheriff.

DECATUR — The first step in a possible recount in the Macon County sheriff's race is set to begin at 8 a.m. Friday, county Clerk Steve Bean sa… 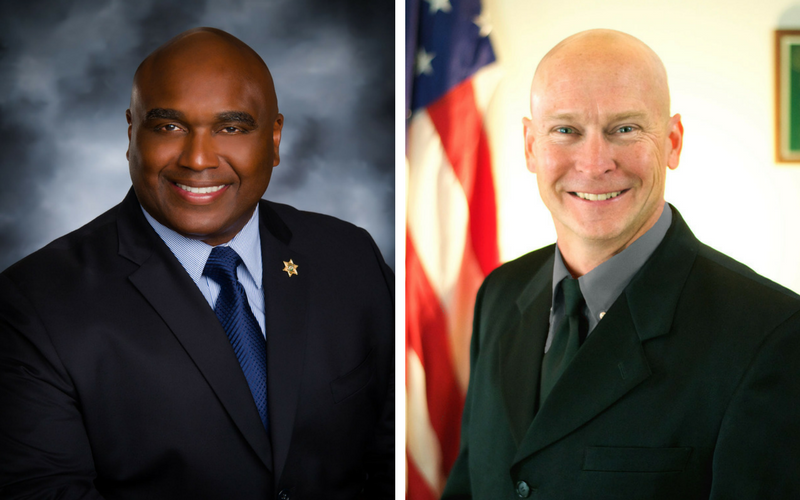 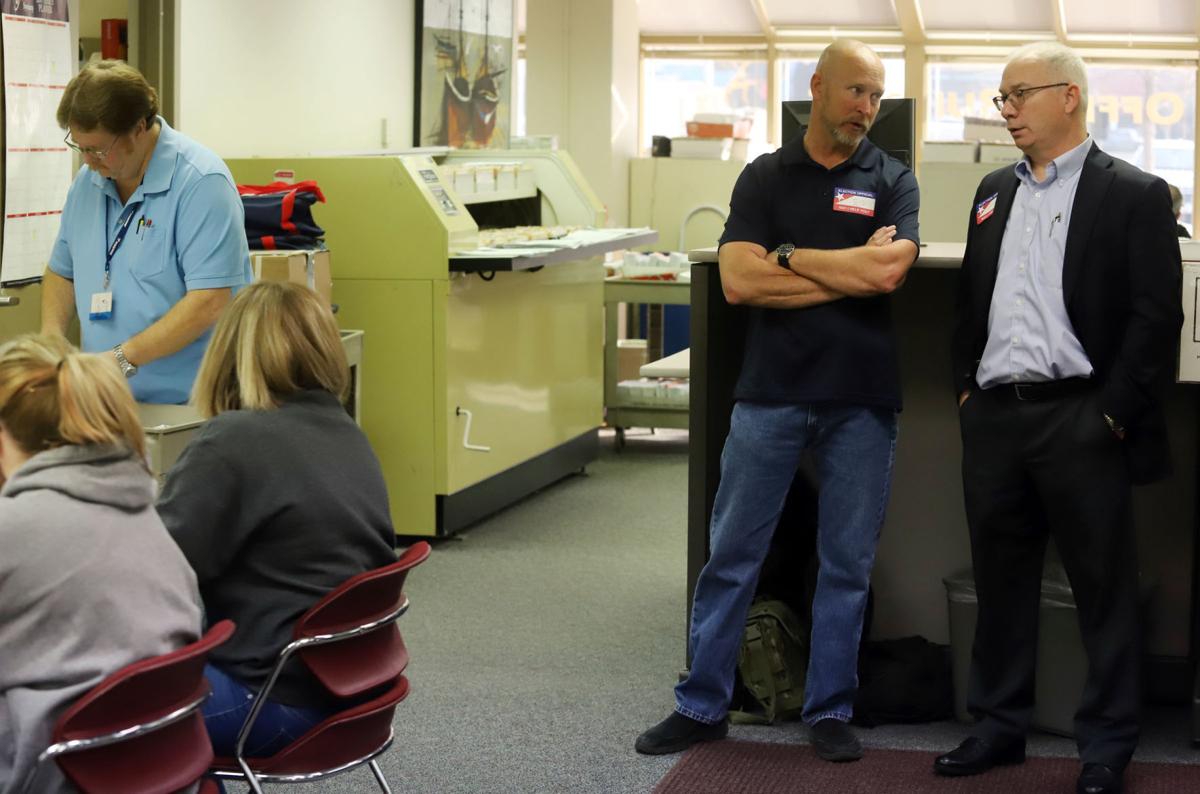 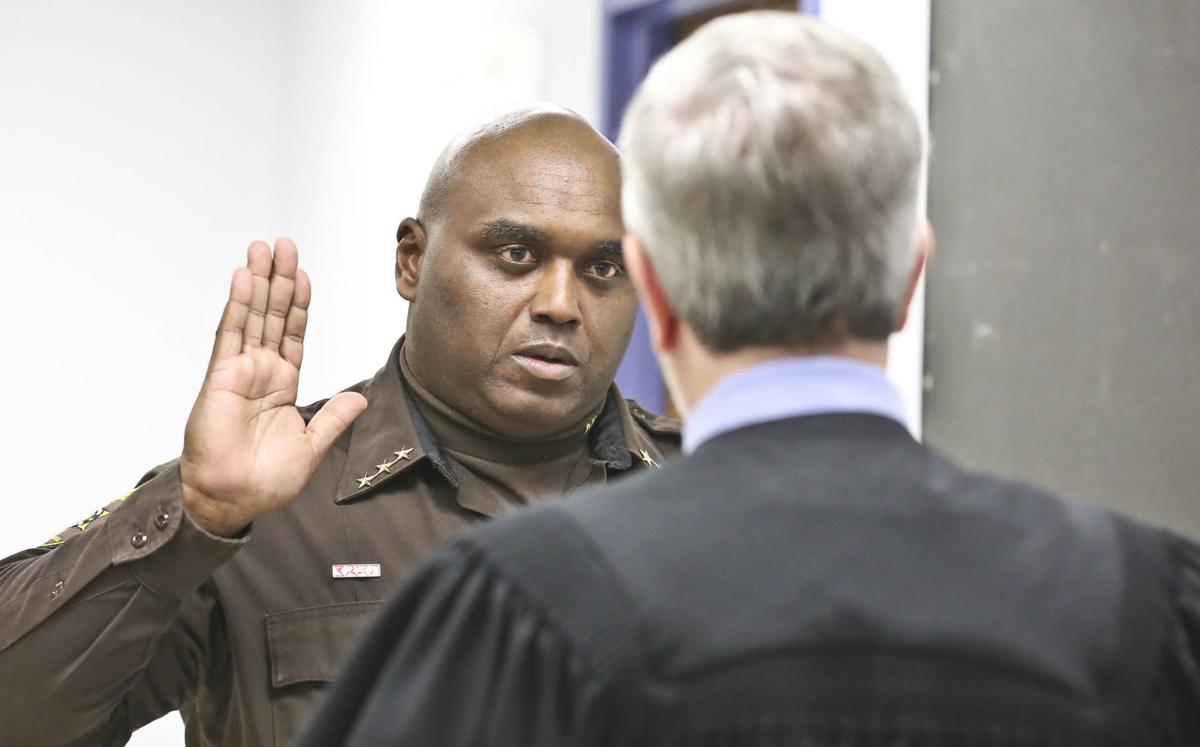 Tony Brown is sworn in as Macon County sheriff on Friday afternoon at the Macon County Law Enforcement Center. 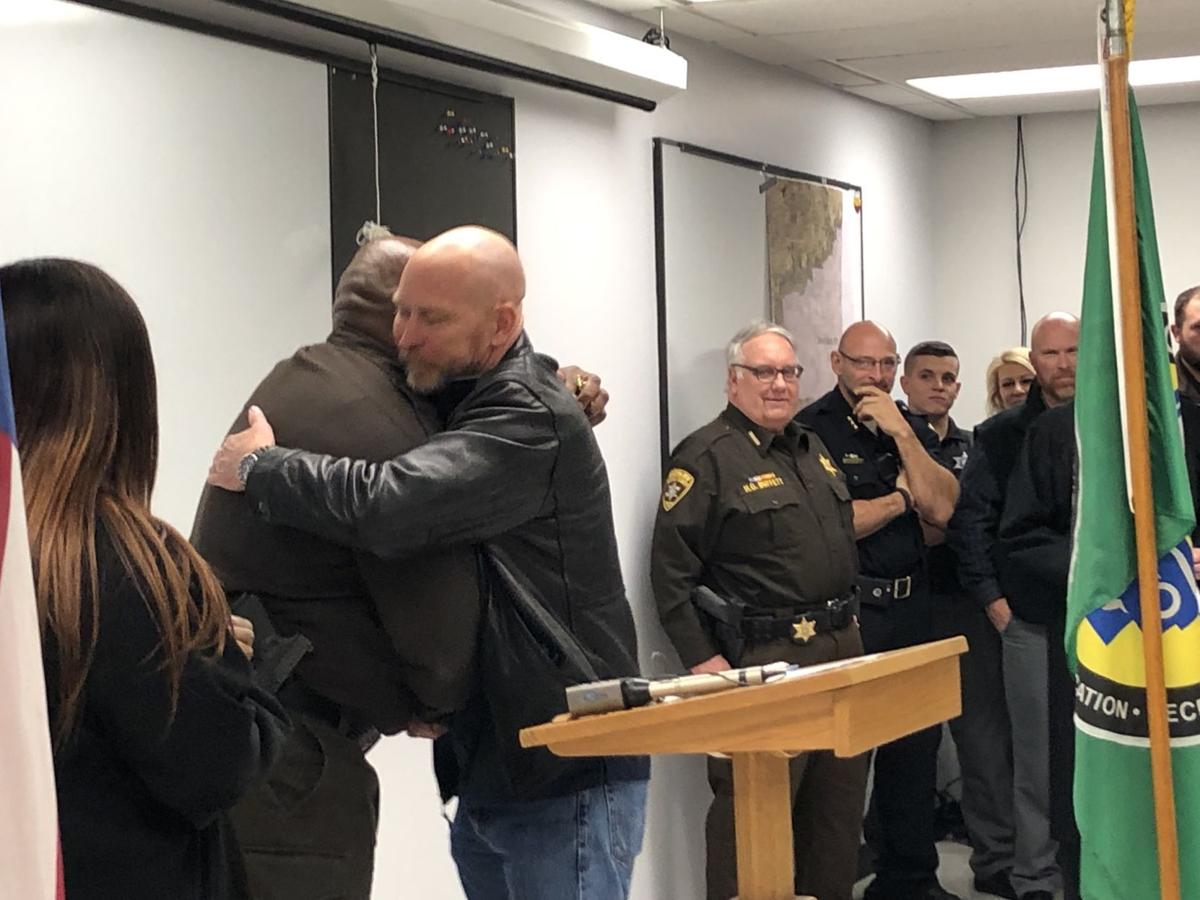 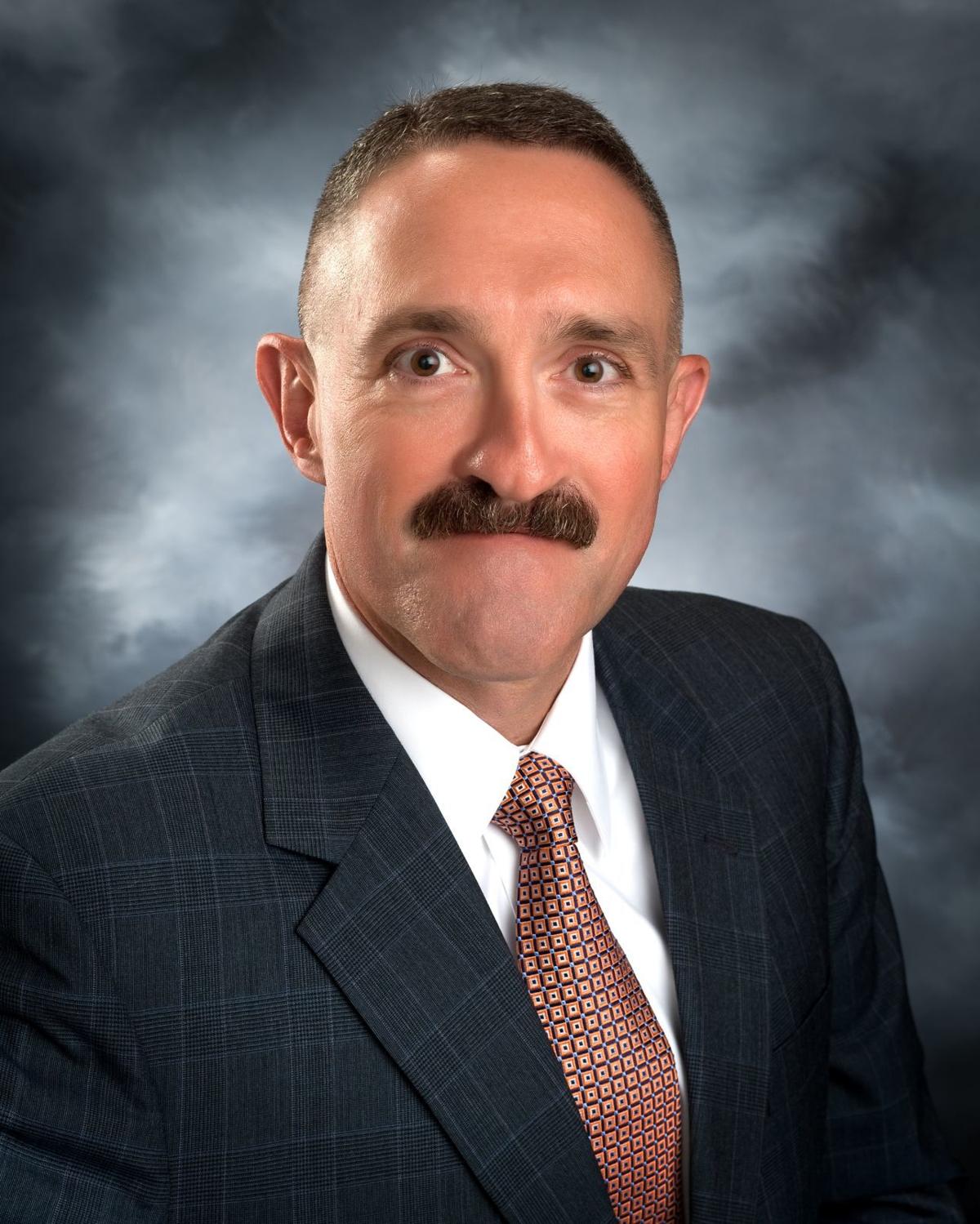