DECATUR — Despite concerns over the dropping of a residency requirement for new officers, the Decatur City Council unanimously approved a new collective bargaining agreement with the union representing the city’s police officers.

The contract’s ratification was one of many significant actions taken by the council Tuesday night, which also included the approval of a one-cent "amusement push tax" on each bet placed on video gaming terminals operating in Decatur and agreeing to provide $200,000 in COVID-19 stimulus funds to the Children’s Museum of Illinois.

And Dennis Cooper, who was selected last week to replace former Councilman Rodney Walker, was sworn in as the council’s newest member at the top of the meeting.

Among the highlights are a 2.25 percent annual increase in base pay and changes to health insurance provisions that put the department on the same benefit plan as other city employees, the latter a change long-sought by the city.

But in a concession to the union, the city dropped its insistence that new police officers live within Decatur city limits for the first five years on the job.

This is a reversal of recent city policy, which has been to mandate residency for new hires. The city passed a residency ordinance in 2016 for non-union hires and later worked the five-year requirement into the contracts of the city's two other collective bargaining units.

The police department was the last holdout in city government, with the city and union agreeing to let an arbitrator decide on the issue.

However, faced with recruiting challenges, the city decided to drop the issue, meaning that new officers will have to abide by the existing requirement that they live in Macon County or any municipality that extends into Macon County.

Several council members begrudgingly supported the deal despite worrying about the possible fallout.

"This sets a very dangerous precedent now for our other unions — AFSCME, the firefighters union, etc.," said Councilman Bill Faber. "They will say, 'why should we make this concession to you?' It's really disappointing the members of our community that we value so much, our police officers, choose not to want to live with us."

Assistant city manager Jon Kindseth acknowledged earlier this week that the concession will "likely have an impact" on the residency policy for other city employees.

Councilman Chuck Kuhle, though agreeing that residency should be revisited in the future, said that "it's a buyer's market right now" for police officers.

"I think we've got to back off a little bit and make it easier to try to get people to want to be police officers in this city," he said.

Department turnover has been a problem the past few years, with officers retiring at a faster rate than new recruits can be trained an sworn in. Recruitment is down too.

Beyond the residency concession, the city also threw in a one-time $1,000 "hazard" pay bonus and a $1,000 recruitment bonus for each new officer brought on by an officer to help address these challenges.

City manager Scot Wrighton said the city has been preparing for the contract by setting aside funds the past couple years in anticipation of the raise in base pay, which he said would cost the city in the "hundreds of thousands" over the life of the contract.

Meanwhile, the city also pushed forward with the 1-cent "amusement push tax" on each bet placed on video gaming terminals operating in Decatur.

Only three municipalities in Illinois, all in the Chicago suburbs, have imposed such a tax. Video gaming operators have sued to stop such laws.

However, a provision was included in omnibus gaming legislation that passed the Illinois House in June that would prohibit cities from imposing such a tax.

It was not taken up in the Senate, but it has some cities scrambling to enact a "push" ordinance before they're no longer able to.

"There are not very many cities that have started doing this, and it might normally be the prudent path to wait and see how this works out in litigation," Wrighton said. "But I don't think that's appropriate in the current circumstance, even though there is a high probability that we could be sued, because the legislature ... is likely to say those who have already done it ... will be grandfathered and we want to be one of those."

Decatur has the third-most video gaming terminals of any city in the state, generating more than $30 million revenue in 2019, according to the Commission on Government Forecasting and Accountability. Of that, about $1.5 million flowed into city coffers.

Wrighton said that, conservatively, the push tax could generate an additional $700,000 to city coffers.

Members of the council suggested that the tax was a way to collect more than the "crumbs" the city currently receives for video gambling as compared to the state, establishments and video gaming terminal operators.

Also, the council approved allocating $200,000 from the city's portion of American Rescue Plan funds for the Children's Museum of Decatur.

It's been a challenging 18 months for the museum, which shuttered in mid-March 2020 and reopened in April 2021. The museum reported a loss of about $350,000 in revenue in 2020, according to museum president and CEO Abby Koester.

"These funds will really put us on the right track to recovery so that we are in a good place when we finally can recover and we're not still trying to tread water and try to catch our breaths," she said.

Also at council, Cooper was sworn in as the body's seventh member.

Cooper emerged as the unanimous choice to replace Walker last week following closed-door interviews conducted by the six incumbent council members with four finalists.
Cooper, 69, worked in various roles for the Illinois Department of Corrections from 1975 to 2007, jumped right in, commenting on the city's mask policy and the police union contract.

The Hampton Inn in Decatur and Mount Zion will be hosting their second annual memorial stair climb from 9 a.m.-7 p.m on Friday, Sept. 10, to honor the 20th anniversary of the Sept. 11, 2001, attacks and the lives lost that day.

Local police joined with other state and local law enforcement agencies to crack down on impaired drivers from Aug. 20 through Sept. 7.

"Workers are hard to come by," said Mayor Julie Moore Wolfe. "We can't even get people to work at restaurants for lunch." 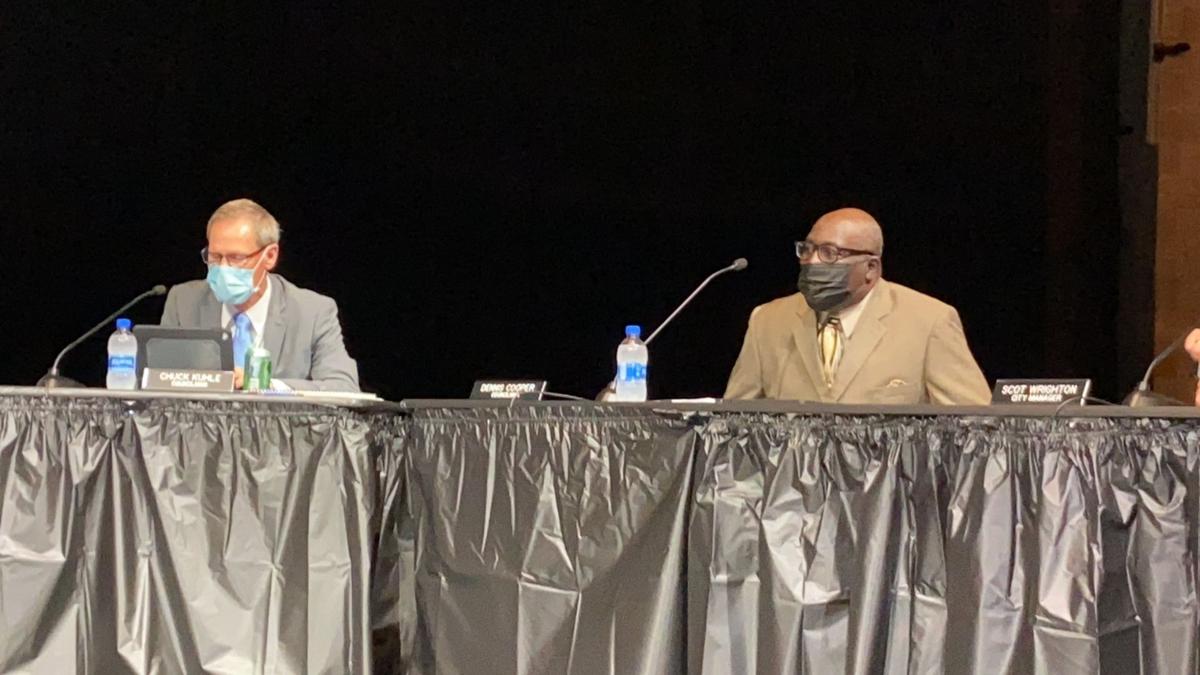 Councilman Dennis Cooper takes his seat after being sworn in Tuesday, Sept. 7. 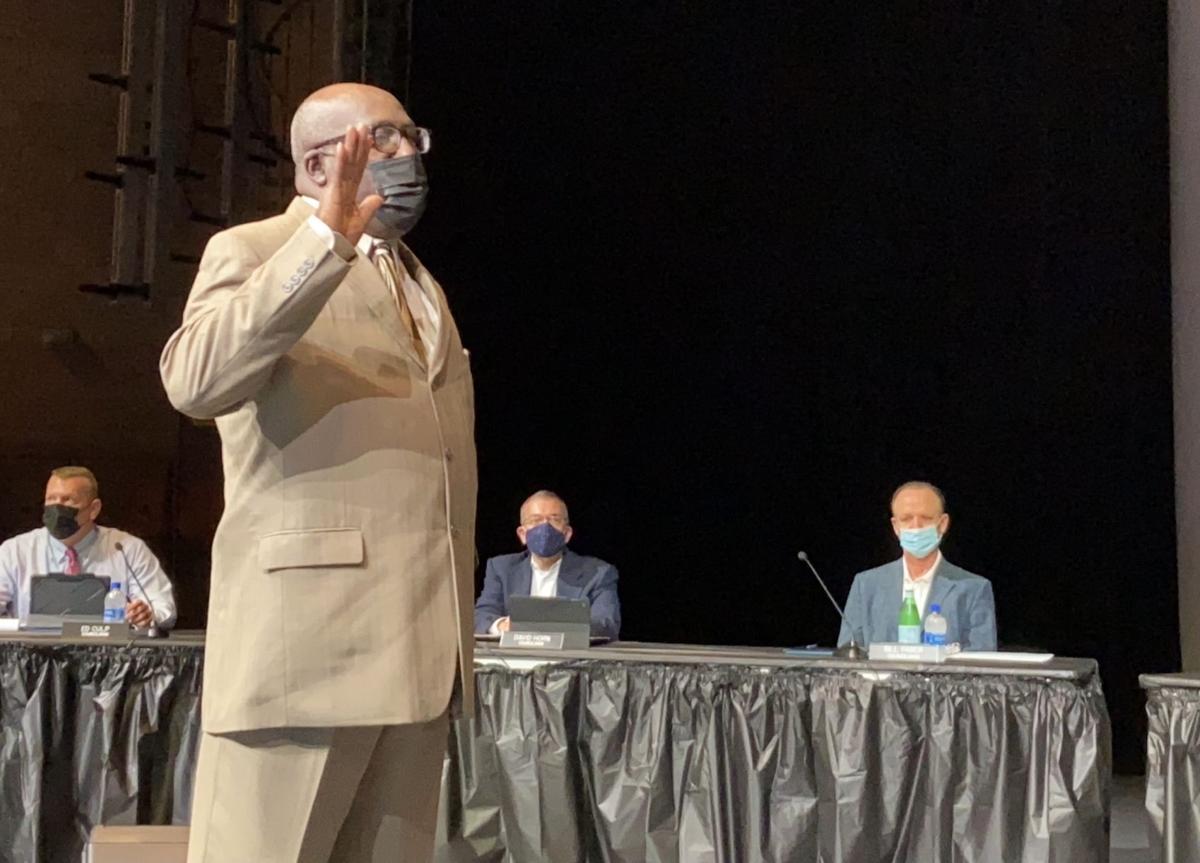