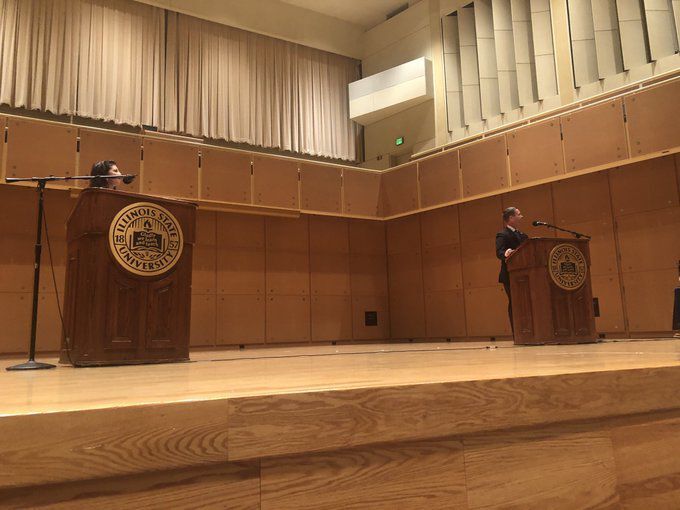 Topics included gun violence, a federal relief package for those hurt financially during the coronavirus pandemic, support for Central Illinois farmers and more.

Last week was the first debate between the candidates running for the 13th Congressional District in the Nov. 3 election and at times became tense.

Davis is seeking his fifth term in Congress. He and Londrigan, of Springfield, also faced off in 2018, when he won by 2,058 votes — less than a percentage point.

The candidates were asked how they would approach reform that would eliminate gun violence.

Londrigan said universal background checks would keep guns out of the hands of those who shouldn’t have them such as violent offenders, domestic abusers and those who are “dangerously ill.”

“We all know that gun violence in our communities is an issue that we have to address,” said Londrigan. “... I want to make sure that when we are having these discussions about how we are going to keep our communities and our schools safe that we bring together gun owners and non-gunowners.”

She added that she hears the same concerns from “all corners of the district,” which are over gun violence in school and suicides.

Davis said he agreed that "we need to do better" and bring together gun owners with those who don't own firearms to work on solutions. He said he has voted in bipartisan ways to ensure that guns do not get into the hands of those who are mentally ill.

“We need to prosecute anyone who is committing a crime with a firearm to the fullest extent in the law,” said Davis, a survivor of the shooting at a congressional baseball practice in 2017.

He said criminals are getting access to guns too easily and those who want to lawfully want to obtain firearms should be able to.

The candidates were asked how much the federal government should do to rebuild the economy after the pandemic ends.

Davis said Speaker of the House Nancy Pelosi was hurting the forward movement of a relief package. "Those packages help mom and pop shops throughout the country," said Davis.

Londrigan pointed to efforts by the University of Illinois in Champaign to limit exposure of COVID-19 on campus and their testing requirements for students and faculty.

"I do believe that we are going to get to the other side of this pandemic and we are going to have to make sure we are investing in our people," said Londrigan. She said the government needs to make sure there are plans to get students and teachers back to school safely as well as plans for health care and making rapid testing widely available.

How to repay nation's pandemic-related debt

“We need to make sure that our families and small businesses are still afloat when we get there,” she said.

Davis responded by saying, “We are going to get through this because we are the United States of America and we win.” He added that the pandemic is something the country has never experienced before and looked to the efforts by congress and other government officials to get personal protective equipment.

The candidates were asked about their message to Central Illinois farmers when it comes to trade policies.

Londrigan said she agreed with President Donald Trump “taking a hard line on China because of their unfair trade practices and the intellectual property that they were stealing.” But it went off the rails, she said.

“(Farmers) are worried about where their markets are going to come from next,” Londrigan said. “...We need to make sure they have markets to sell to.” Investing in technology and conservation programs that the farmers already trust needs to happen according to Londrigan.

Davis said he has been endorsed by several major agriculture groups including the Illinois Farm Bureau's ACTIVATOR Committee, a political fund to support candidates in line with agriculture interests.

“I have worked with our farmers hand-in-hand since getting to Congress,” Davis said. He chaired for two terms the subcommittee that has jurisdiction over the agriculture research.

Davis said he has worked on grants that helped universities receive funding for agriculture research.

Davis said climate change is real and man-made. He said he agrees with the country’s current approach and he doesn’t support getting rid of coal plants or nuclear energy plants. That would raise the price of electricity and jobs at those plants need to be protected, said Davis.

“We cannot run the American economy on wind and solar alone, we have to have nuclear facilities available,” Davis said.

He also said farmers are some of the best environmental activists because they want their land to be there for their grandkids.

Londrigan said it was a mistake for the U.S. to leave the Paris Climate Agreement, a 2015 agreement within the United Nations to address the impact of climate change. She said she wants to be a part of the committee that makes decisions on climate change and that time needs to be spent looking at what the Trump administration has done to roll back efforts to combat impacts of climate change.

The candidates were asked to describe an example of when they disagreed with issues that the majority of their respective party members support.

Londrigan said she does not support the Green New Deal, a 14-page resolution introduced by Democratic New York Rep. Alexandria Ocasio-Cortez and Sen. Ed Markey of Massachusetts outlining a shift to 100% renewable and zero-emission energy sources, and calls for the creation of millions of new high-wage jobs to help wipe out poverty.

“I don’t think that we have enough of a voice in a program like that,” Londrigan said, adding that Central Illinois citizens, especially farmers, wouldn’t be able to have much control.

Davis said he supported extending the opportunity for states to pass the Equal Rights Amendment and voting to reauthorize the Violence Against Women Act, which is intended to “prevent, combat, and investigate sexual assault and violence against women and support critical victims' services” such as counseling and housing assistance.

“I promised to go to Washington and work in a bipartisan way; that is what I’ve done,” he said.

The candidates were again asked this week about systemic racism. Last week, they answered a question about police reform. This week they were asked to answer what their plans were to address systemic racism in the areas of minority access to education and credit.

“What we saw happen to George Floyd was a tragedy, but I believe that the overwhelming number of law enforcement officers in this country are wanting to do their job and do it to the best of their ability the way they were trained,” said Davis.

He recalled that, during the 2017 shooting incident, two Black officers ran into the path of gunfire to protect the crowd that included Davis. “That’s what courage is. That is what officers do,” said Davis.

He said the “movement to defund the police has got to be the most ridiculous idea” he has ever heard. Instead, Davis said, more investment should be put into law enforcement and more school resource officers should be utilized.

“What we need to do is address the issues that many in the African-American community have against our police officers and ... they need to chat and get to know those who are in charge of our police forces in our communities and also get to know the local politicians and administrators who have jurisdiction over law enforcement,” Davis said.

“If we are not talking about the systemic injustices in our criminal justice system, in our health care, in our businesses then we are missing the point,” she said. “We do have to address what is happening with law enforcement.”

She reiterated a point she made during the debate last week by saying implicit bias training needs to be put in place and chokeholds should be banned.

“We also need to understand the roots of what is going on,” Londrigan said. “...Why are Black mothers dying at a rate two to six times more than white mothers? Why are Black men getting diagnosed with colon cancer at such an early age? Why are our minority owned businesses at the back of the line for payment protection?”

“I want to go to Washington D.C. because I want to represent people in Central Illinois,” said Londrigan, reiterating times that Davis has voted to repeal the Affordable Care ACt. “I want to protect your health care.”

Londrigan added that she has not taken money from corporate political action committees and that she wouldn’t as a member of Congress. “I am asking for your vote.”

Davis said he has continued to vote to protect pre-existing conditions coverage.

“I have never voted to get rid of pre-existing coverage and it is a lie no matter how many times she said it, it is not true,” said Davis.

Working together in a bipartisan way is a priority, he said. “Corporate lobbying dollars actually pay her mortgage. It is the hypocrisy that we don’t need.”

On Texas visit, Biden warns Iran 'to be careful'

On Texas visit, Biden warns Iran 'to be careful'

U.S. Rep. Rodney Davis, R-Taylorville, and Democratic challenger Betsy Dirksen Londrigan are facing off in a televised debate at 7 p.m. on Monday.

Health care, taxes and abortion are among issues that separate the candidates for the U.S. House from the 13th Congressional District -- incumbent Rep. Rodney Davis, R-Taylorville, and Democrat Betsy Dirksen Londrigan of Springfield.

Bernard Schoenburg: With long-time home in Springfield, why does candidate's father vote, get elected delegate from Taylorville?

The blitz of TV ads targeting U.S. Rep. Rodney Davis, R-Taylorville, and Democratic challenger Betsy Dirksen Londrigan are one indication of the national interest being directed at this tight rematch.

Healthcare, the economy and the pandemic are among key issues in the 18th Congressional District race between Republican incumbent Darin LaHood and his Democratic challenger George Petrilli. 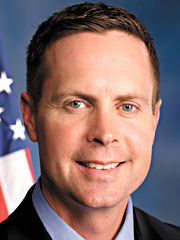 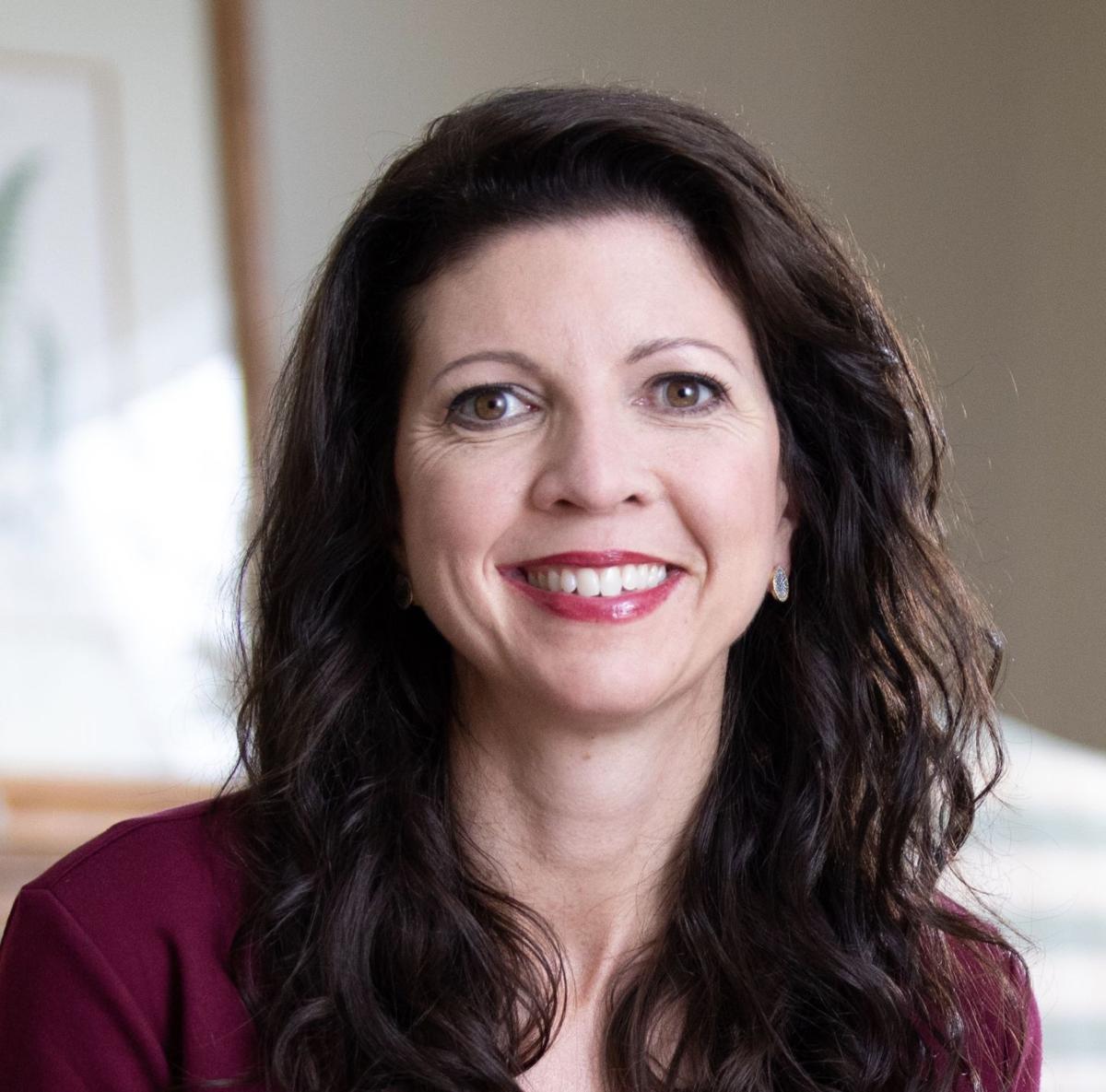