The Supreme Court's decision to put the issue of abortion in the hands of individual states and remove its status as a constitutional right has made the upcoming election cycle critical, said Macon County Democrat party chairman Karl Coleman.

DECATUR — In late July, the Macon County Democratic Party touted what it called a "historic" slate of all-female candidates for the countywide offices of clerk, sheriff and treasurer.

The party nominated the candidates — Kathryn McAlpine, Shannon Gutierrez Seal and Melverta Wilkins, respectively — who then filed petitions for spots on the November ballot, which was permitted since no candidates filed to run for the respective offices during the Democratic primary election in late June.

At the same time, Democrats nominated two candidates for Macon County Board, Jon Moore in District 3 and Tony Wilkins in District 5.

But just two weeks later, it was over.

All five appointed Democratic candidates withdrew from their respective races amid challenges from local Republicans to their nominating petitions.

This means Republican incumbents are running unopposed in the three countywide races. And voters in District 3 and District 5 will each have three Republicans and just one Democrat to choose from in a system where the top three vote-getters win. 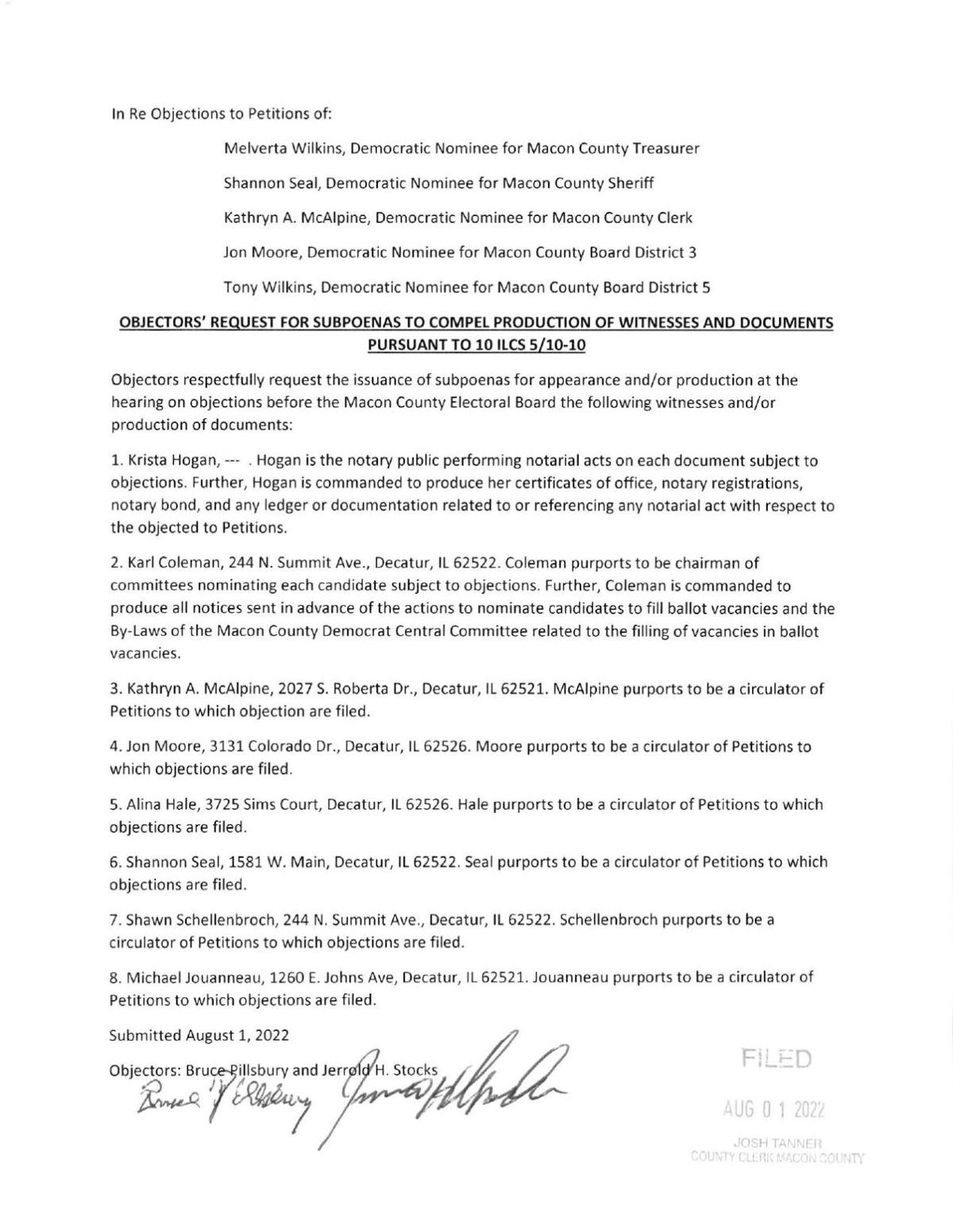 The objections to the Democratic candidacies were filed by Macon County Republican Party chairman Bruce Pillsbury and party attorney Jerry Stocks, who alleged that the candidates' petitions were not properly notarized.

Under state law, those circulating petitions have to certify with a notary the dates for circulation, that the people who signed did so in the circulator's  presence and that all signatures are genuine and of people who are registered voters within the jurisdiction in which a candidate is seeking office.

Pillsbury and Stocks' objections allege that several petitions were not dated and did not identify the jurisdiction in which they were notarized. The notary also omitted the names of the circulators, which would also invalidate the petitions.

Their objection also raised questions about the petition circulation period. The candidates were nominated by the Macon County Democratic Party on July 24 and petitions were submitted to the Macon County Clerk's office on July 25, the deadline to fill vacant spots on the November ballot.

This left less than 24 hours for the five candidates to gather signatures as they cannot be gathered prior to an appointment.

Per the objection, about 979 signatures were gathered from hundreds of addresses by nine people for the five candidates.

Though circumstantial, the objectors raised the question of whether the appointed candidates could have gathered so many petitions and had them properly notarized in less than a day.

"In summation, the totality of circumstance evidence pervasive fraud, directly or by inference," the petition read.

Four of the Democratic appointees were scheduled to appear before the Macon County Officers Electoral Board on Aug. 8 but each withdrew their candidacies before their cases could be heard. 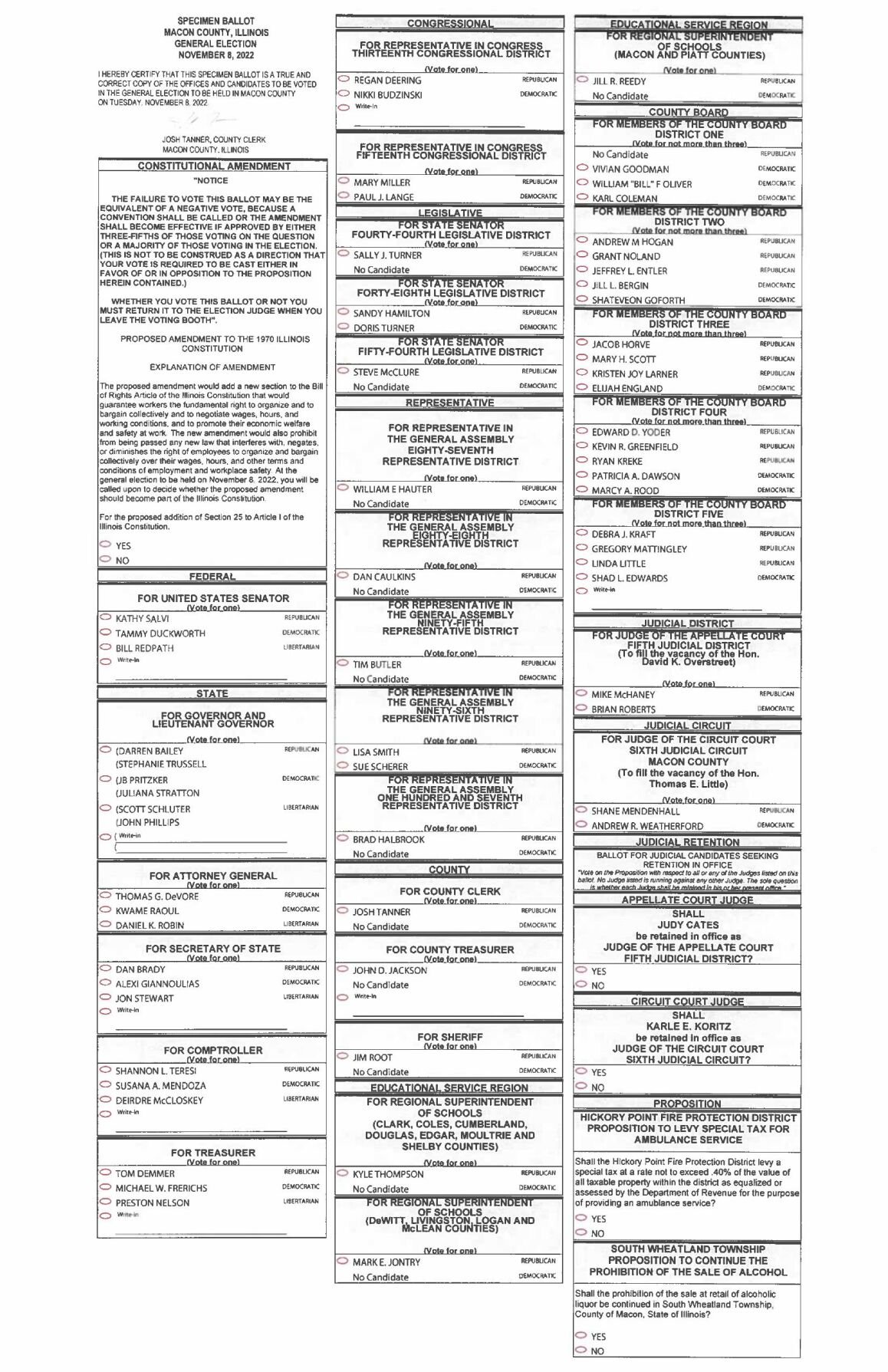 Gutierrez Seals had previously withdrawn her candidacy because she was deemed ineligible to run as a Democrat this cycle after voting in the Republican primary in June.

"When things get rushed, the technicalities become somewhat cumbersome and difficult to adhere to," Stocks said. "So I think — I cannot read the minds of the petitioning parties, but — they recognized that there were technical issues minimally, if not more substantive matter and withdrew the petitions to moot our objections."

Macon County Democratic Party chairman Karl Coleman said the party decided to withdraw the candidacies after consulting with lawyers, concluding that they stood little chance of winning at the board hearing and that it was not worth the expense to take the fight to court.

Coleman said that the claims made in the objections were "unsubstantiated" and that "political antics and gamesmanship" on part of the county Republicans is what led to the Democratic withdrawals.

Democrats have been reeling from years of Republican gains at the county level. This manifested itself last year when Republicans approved a new county board map that reduced the body's size and eliminated the only minority-majority district in a county that's one-fifth Black.

Though one of the districts has a 46% African American population, Coleman said the party is still exploring a lawsuit that will allege that the map violates the Voting Rights Act of 1965. Any legal action would likely come after the November election, Coleman said.

But in this case, the Democratic county party chair said the odds were stacked against them given that the three-member board that would have heard the case is all Republican.

But Stocks dismissed this interpretation.

"It's a cover story for the Democrats' failure to put a candidate on the ballot in a timely manner," Stocks said. "It's what's called a pretext, an excuse and, ultimately, my direct response is that it reflects a pathetic departure from common sense."

Stocks added that he makes "no apologies as an attorney for a political party to hold the other side to comply with the requirements of law.

"And we still were going to beat every last one of them 60-40 come this fall," Stocks said. "Macon County is a red county and, probably, our objections were more an act of mercy for those candidates than it was a transgression against them."

Macon County Clerk Josh Tanner, who serves on the Macon County Officers Electoral Board with State's Attorney Scott Rueter and Circuit Clerk Sherry Doty, pointed out that its makeup "is set in (state) statute and it doesn't ever envision political makeup. It just names officers."

He said he could not speak to the merits of the objection because they never examined the evidence since the candidates withdrew before the hearing.

"I feel like candidates who follow the rules and who comply, I think they get a fair hearing," Tanner said.

One of the candidates, Melverta Wilkins, however, is not giving up. She filed to run as a write-in candidate for county treasurer against Republican incumbent John Jackson.

Her intent to be a write-in candidate, a prerequisite, was filed with a notary public's seal — dated and with the jurisdiction identified.

With victory, Shannon Gutierrez Seal would be first elected female sheriff in Illinois.

Candidates placed on ballot to for sheriff, county clerk and treasurer. 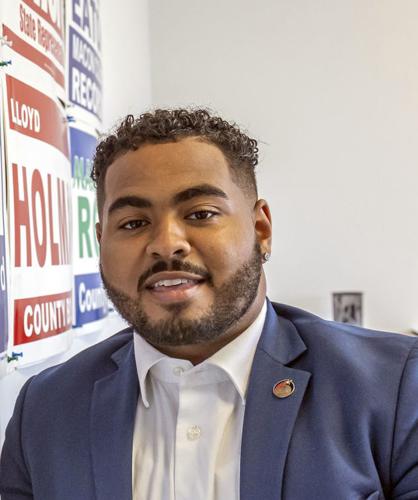 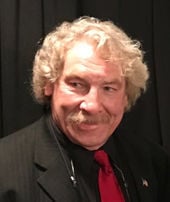