DECATUR — The worst damage from a storm system that swept through Central Illinois on Monday occurred in Sangamon County, but Macon County wasn't spared.

The National Weather Service's storm damage report, released Tuesday, lists a brief tornado touchdown along Interstate 72 near Dawson, power poles blown into a field, a tree uprooted in Charleston, and hail measured at one inch in diameter in Macon and two inches in Rosamond.

Three touchdowns in Mechanicsburg and Dawson in Sangamon County and in Newmansville in Cass County resulted in power outages and damage to cars reported.

The tornado activity was categorized as an EF-U, because maximum wind speed is not known. In all, four tornadoes were reported by the public and trained storm spotters, with the first one reported shortly after 5 p.m.

Tuesday's weather was soggy but not threatening, with rain and a high of 58. Rain is expected to end overnight with a high of 64 and clear skies on Wednesday.

Watch now: No injuries after funnel cloud spotted in Assumption

Shuttle buses and parents were waiting to take students home from school at Central A&M in Assumption on Thursday when Superintendent DeAnn Heck spotted a funnel cloud. 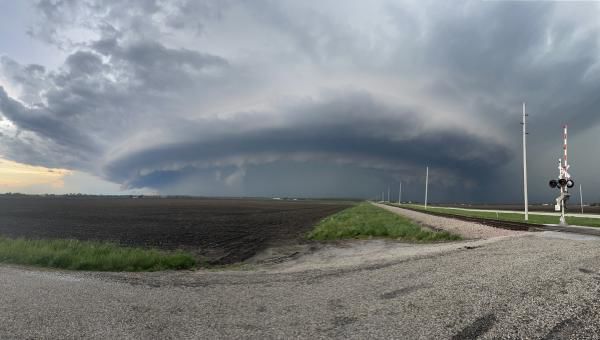 A shelf cloud hovers over Sullivan in this photo posted on the National Weather Service site.

Rotating clouds are seen over Macon in this photo provided by the National Weather Service.