DECATUR — Former Macon County Sheriff Howard Buffett and local law enforcement officers who have gone to help with border security near his rural Arizona ranch are featured prominently in a two-part series published by a Phoenix alternative newspaper.

The stories, headlined “Howard Buffett's border war: A billionaire's son is spending millions in Cochise County” and “Border cowboys: Howard Buffett is a perfect fit with Cochise County’s legacy of vigilantism​,” total about 11,000 words and were published Thursday in the Phoenix New Times.

The articles by Beau Hodai rely in part on emails obtained through public records requests between Buffett and Decatur police detective Chad Larner. The Herald & Review reached out to Larner and Buffett with interview requests, but was unsuccessful.

The majority of the New Times series focuses on the relationship Buffett has with officials in Cochise County, Arizona, where his Christiansen Ranch is adjacent to the Mexico border, and “the arming of a private volunteer group” to handle security at the property.

Hodai writes: “Buffett has also purchased the loyalty of — and influence over ­— the Cochise County Sheriff’s Office (CCSO). He has done this through a steady stream of gifts and grants totaling tens of millions of dollars, used to buy guns, vehicles, surveillance equipment, helicopters, and other toys. For his part in this relationship, Buffett has gained legitimacy and support — under the color of law — ­for his border war.”

The second article highlights several emails between Buffett and Larner. In one 2015 exchange, the two discussed the Black Lives Matter movement and protests related to police treatment of minorities.

Larner in the email said that while people expect to be treated with respect and dignity, he would not allow “left wing liberal lunatics” to tell him how to do his job, according to the New Times story.

“This is the big stage. Every day is a rock concert,” Larner wrote to Buffett, according to the article. “If these ‘once proactive’ cops are ‘slowing down’ ...... they weren't worth a s*** in the first place.”

The story says that Buffett responded by telling Larner that he should run for office. When the detective declined, Buffett wrote: “Oh come on man .... don't be so selfish, serve the public, support those on welfare and probation. Be a sport!”

Buffett, whose term as Macon County sheriff ended Dec. 1, did not respond to a request for comment that the Herald & Review made through a spokesperson for his Decatur-based charitable foundation. A former Archer Daniels Midland Co. executive, Buffett has donated millions of dollars to Decatur-area causes.

Decatur Mayor Julie Moore Wolfe, asked to comment on the articles, said she knows Buffett and what kind of person he is.

“He’s dedicated his life to trying to improve the lives of others,” she said. “I think that speaks for itself.”

Moore Wolfe, a former television reporter, said in a text message that she was not familiar with the publication, but “given the language included in the article, I don’t have any idea what kind of journalistic ethics the author is guided by.”

The first article begins by referring to photos from a 2016 gathering in Arizona among Buffett and two men the story says are “likely” Larner and Macon County sheriff's deputy T.W. Houk. The three took several pictures of themselves posed with guns and other accessories near Buffett’s ranch, according to the story.

Macon County Sheriff Tony Brown, who was elected in November, in an email said he did “not wish to comment” about the New Times story “due to me not having knowledge of the conversation in its entirety.”

He did say that “deputies employed with the Macon County Sheriff’s Office and along with many others agencies do send employees out of our jurisdiction to both receive and conduct training.”

Brown did not respond to a request to make Houk available for comment.

Buffett was Macon County sheriff from September 2017 until November 2018, serving out the remainder of former Sheriff Thomas Schneider’s term. Buffett is the son of billionaire investor and Berkshire Hathaway founder Warren Buffett.

Howard Buffett's selection made national headlines when he took over the role of sheriff.

Schneider did not immediately respond to questions about the Phoenix story on Friday.

Buffett began volunteering at the office as an unpaid auxiliary deputy sheriff in 2012. He later became an undersheriff in 2014. He has given more than $100 million to Macon County law enforcement agencies and charitable efforts since he moved to the city in 1992.

Even with his tenure over, Buffett said in an interview in November that he still plans to spend time in Decatur and contribute to local causes. His largest single donation to the area, announced last year, is a $30 million drug rehabilitation and social services campus now under construction near the heart of the city.

UPDATE: An earlier version of this story did not include the relationship between Berkshire Hathaway and Lee Enterprises. This version has been updated.

DECATUR — It was hard to overshadow the departure of a multi-millionaire, international philanthropist as head of a Central Illinois law enfor…

Central Illinois student at March for Life in D.C.: 'Too many unborn lives are taken' 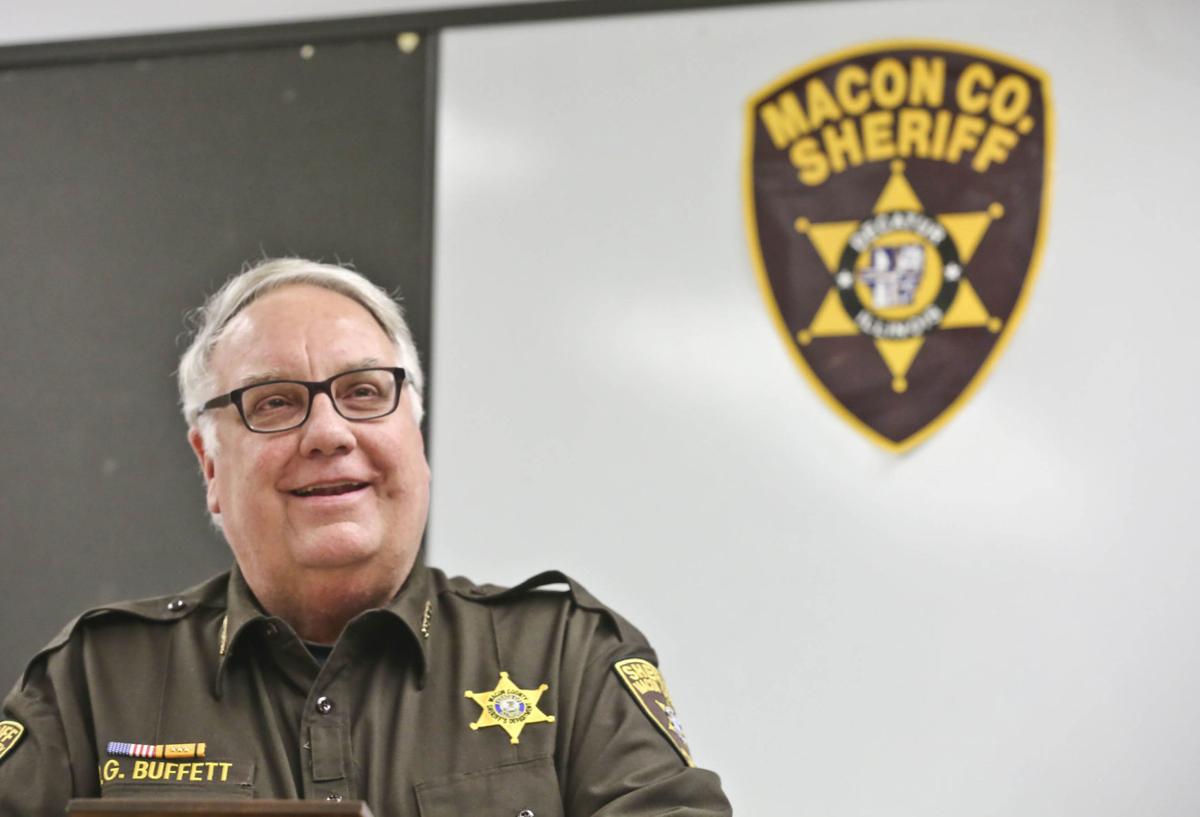 Macon County Sheriff Howard Buffett talks about Lt. Tony Brown before Brown was sworn in as sheriff on Friday at the Macon County Law Enforcement Center.