Become a Member
Read Today's E-edition
Share This
Inside the box: Inhabitants learn about homelessness
0 Comments
Share this
1 of 4 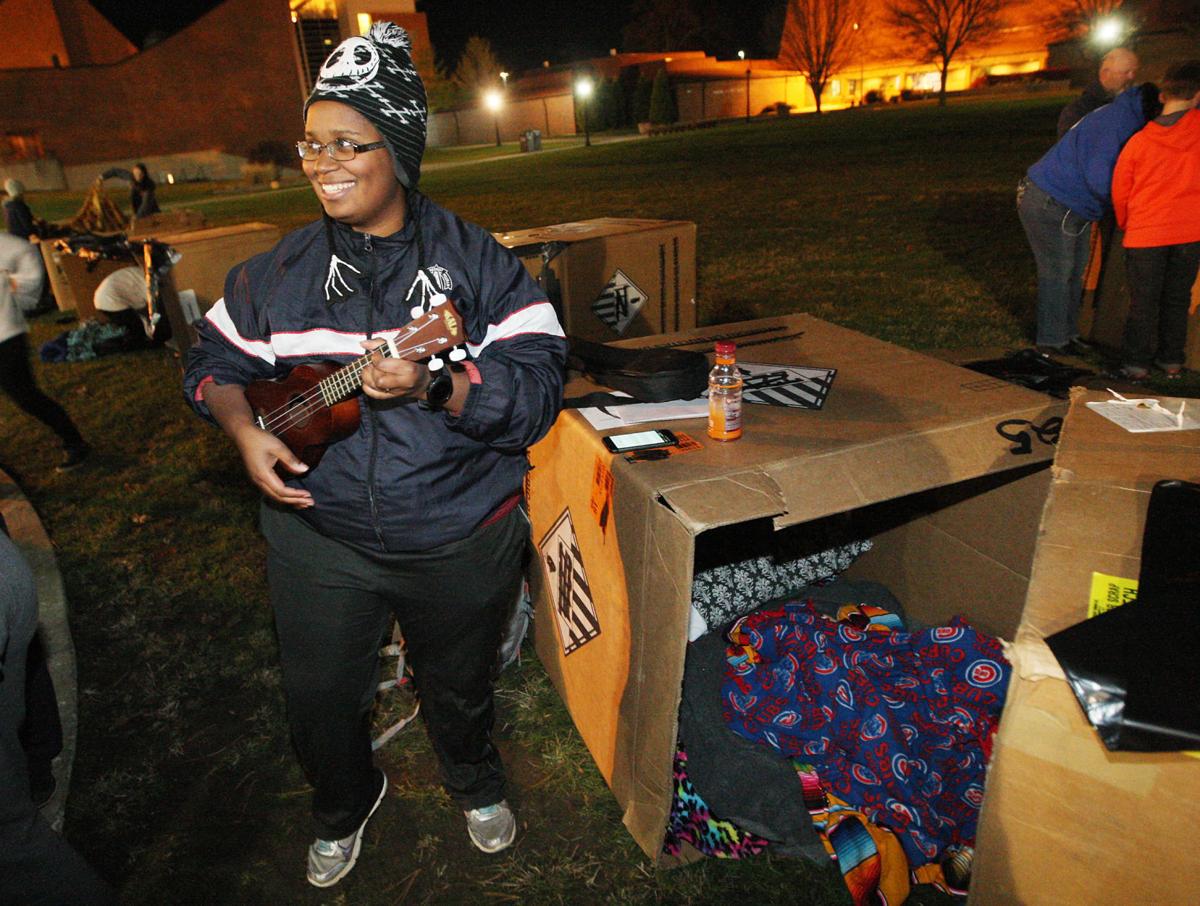 Derekah Kingery sings and plays the ukulele while preparing to sleep in a box for the night during the annual Box City event at the Miller Quad on the Millikin University campus. 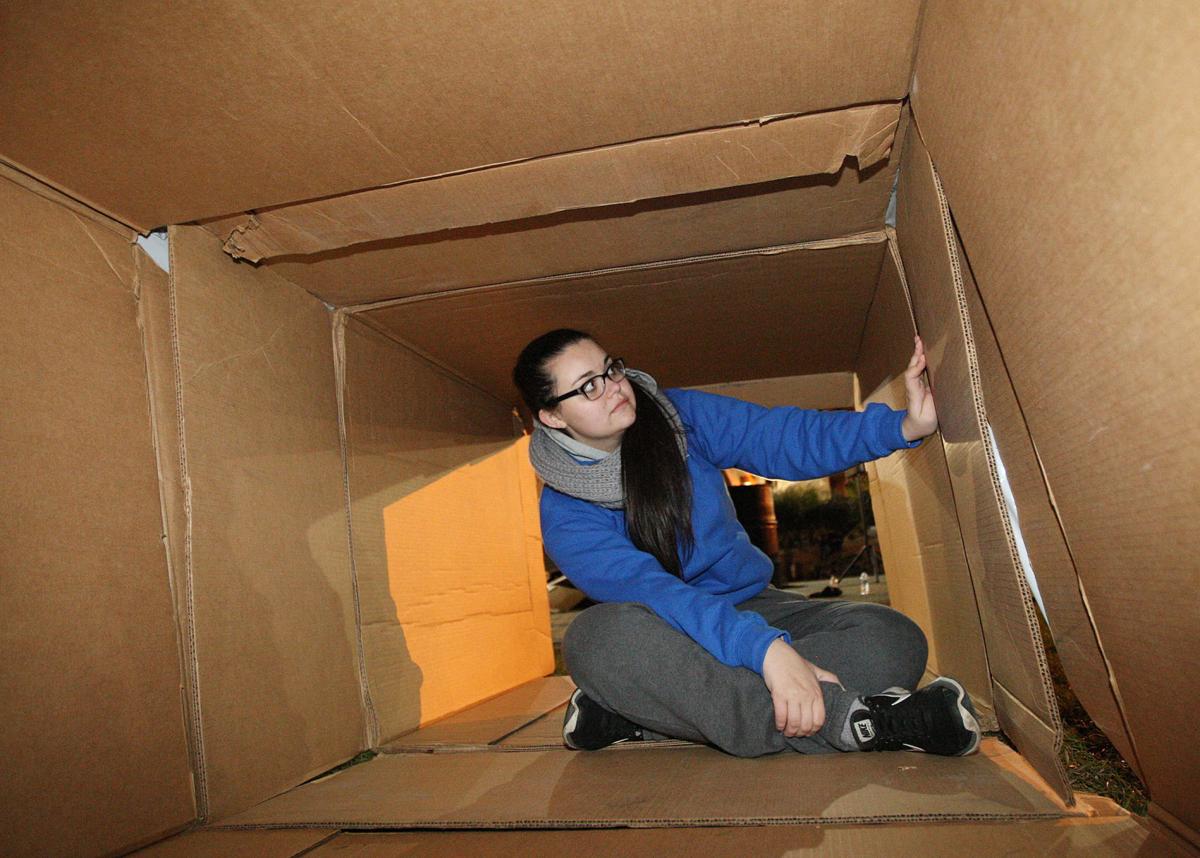 Taylor Porter works with partners to create a temporary sleeping apparatus during the Box City event. 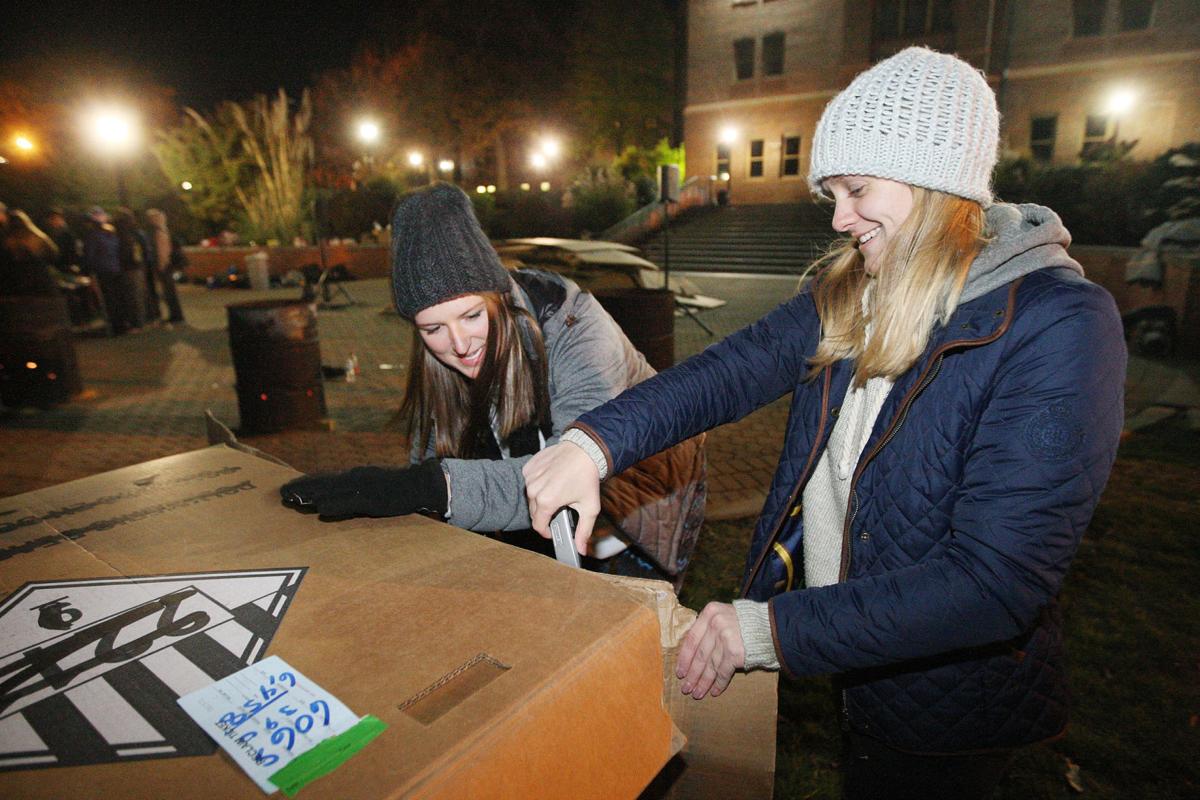 Morgan Kuntz, middle, and Meghan Whitlock cut cardboard to create a place to sleep during the annual Box City event at the Miller Quad on the Millikin University campus. 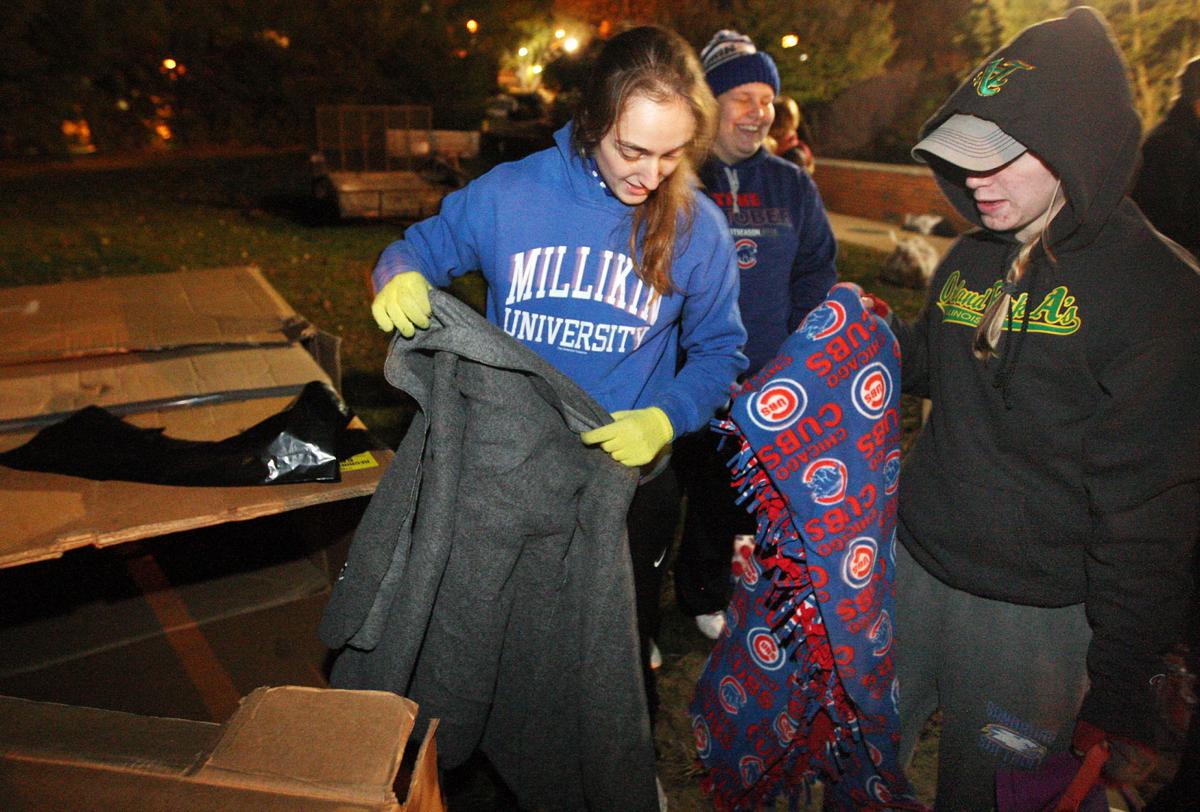 From left, Nicole Koch, Jessica Meeker and Brooke Heimerl prepare to sleep in their boxes.

It took sleeping on the ground inside a cardboard box, while temperatures dipped toward freezing at dawn Saturday, to clue her in.

“I was nowhere near prepared for the weather, so I don't think I got an hour's sleep,” she said. “Just imagining that somebody so close to me had to go through that for three whole months, I almost started crying.”

Williams, a sophomore creative writing major from Chesterfield, Mo., was one of about 20 Millikin University students and 10 community members who stuck it out all night for Box City this weekend, an annual 18-hour event that began on campus this year, for the first time, just after sunset on Veterans Day.

The purpose is to kick off National Hunger and Homelessness Awareness Week by making the problems of the less fortunate personal.

Organizers always try to make it realistic, but this year Millikin's Human Service Connection student organization and the Macon County Homeless Council Continuum of Care took the experience to the next level by requiring participants to go through a simulation of homelessness inside Shilling Hall to earn the materials they needed to build the makeshift shelters they would use for the night.

The change not only scaled down the cardboard castles seen in past years on the university's Miller Quad but also helped Box City's residents understand a homeless person's search for basic services and which agencies offer what.

Katie Bohland said she and other members of New Vision Urban Ministries went through the exercise as 19-year-old pregnant woman who'd just been laid off from her job and evicted from her apartment. “This just always been my concern for the city is because there are very few emergency shelters, especially for women and children,” Bohland said. “If it's later in the day, there's literally no place for them to go.”

Interestingly, the continuum's advisory committee discussed that very issue on Thursday, causing Dove Inc. Executive Director Christine Gregory to ask other service providers to let her know about their experiences with that population.

She said she needs data to go after funding to open another shelter.

Also at the meeting, Todd Tuggle, director of the Oasis Day Center for the homeless, and Jeff Mueller, director of men's services for the Salvation Army, said their Chronic Homeless Action Team is gearing up to get more people into housing after accomplishing this with 22 chronically homeless people in the past year and identifying eight more who did not cooperate with efforts to help them.

Brian Wilhelm, a senior human services major from Decatur and a member of Millikin's Human Service Connection, shared statistics Friday night from the annual Point-in-Time Survey of the Decatur-area's homeless population showing that the number peaked at 255 two years ago and had dropped to 157 in January of this year.

Mueller reported that eight of the 33 now staying in the army's homeless shelter are military veterans.

Eddreana Lindsey, 33, one of two assistant chefs at the Good Samaritan Inn, spoke before the soup kitchen served the group sandwiches and soup for supper Friday. Angel Nieves, 35, helped with activities before breakfast Saturday at the Salvation Army's Community Hall.

First he was an actor in one of the dramatized scenes Box City residents encountered there after walking from Millikin University. Then he gave his testimony about having no where to go after his parole from prison four years ago.

Now rehabbing his third foreclosed house after starting on the one he's living in, Nieves continues to work with a case manager through the army's Pathway of Hope program.

“I had nothing when I went to stay at the Salvation Army,” he said. “Now I have a home, a daughter and a son, and a whole life.”

In addition, organizers including Mary Garrison, associate professor of social work at Millikin, and her students urged Box City dwellers repeatedly to take the event seriously.

“A couple of individuals have come up to me a bit worried that we're treating the lives of homeless individuals as a game,” said Ben Viette, a junior human services/theater major from Belvidere and president of the Human Service Connection. “I assure you we are trying to represent one night in the life of a homeless person as genuinely and respectfully as possible.”

Bayleigh Williams was by no means the only Millikin student who talked about the night as a life-changing experience.

George Rushing II, a senior vocal music education major from O'Fallon, Mo., said his first Box City two years ago, when the night got so frigid the group abandoned their boxes for the gymnasium floor inside Griswold Physical Education Center, differed from the one he had hunkering down inside a box beside burn barrels set up along the outer rim of brick on the Miller Quad.

But they had much in common.

“For one moment you get a little glimpse into how other people have to live,” Rushing said. “It may be real cold outside, but what warms me is the support and fellowship amongst all of us.”

Possibly the oldest and youngest Box City inhabitants this year were Carol Brown, 71, and her grandson Wesley Jaukkuri, 12, both of Blue Mound.

Both encountered frost on the grass and on their boxes as they arose before sunrise Saturday. Wesley said he got cold and would bring more clothes next time.

“I came more prepared, so I was comfortable,” Brown said. “It breaks my heart when I see people in town carrying a garbage bag with all their belongings.

“Box City does make you think about what they have to go through.”

Ways to Make the World a Kinder Place

No matter how you voted, we could all use more kindness after such a divisive election. Here are some ideas and local organizations that could…

DECATUR – People often ask Mary Hill, about to begin her fourth year ringing bells for the Salvation Army, why the red kettles come out nearly…

DECATUR – Bernard Sangster was looking for a new direction for his life when he got out of jail this summer.

DECATUR – Harris School third-graders are learning about helping others.

Homelessness made a crime in more cities, report says

HONOLULU (AP) — Cities across the country are enacting more bans on living in vehicles, camping in public and panhandling, despite federal eff…

Thumbs up, thumbs down Nov. 18

THUMBS UP! To the legacy left by Dwayne Andreas, who died this week at age 98. The former CEO of Archer Daniels Midland Co. brought world lead…

DECATUR – At the Good Samaritan Inn Saturday, there were plenty of reasons to smile.

DECATUR -- A year ago at this time, Bettina Ryan didn’t have a place to sleep at night.

Lesson in homelessness: You can't tell who needs help by looking

It’s hard to tell who’s who in Box City, even after the sun comes up the next day.

Finding the homeless: Annual census expected to show population up

DECATUR – Because 22-year-old Jasmine Smith stayed with her sister the night before, she didn't fit the federal definition of homelessness.

NORMAL — Students at Heartland Community College walked into a room with an "immigration" sign on the desk, but the sign was about the only th…

Derekah Kingery sings and plays the ukulele while preparing to sleep in a box for the night during the annual Box City event at the Miller Quad on the Millikin University campus.

Taylor Porter works with partners to create a temporary sleeping apparatus during the Box City event.

Morgan Kuntz, middle, and Meghan Whitlock cut cardboard to create a place to sleep during the annual Box City event at the Miller Quad on the Millikin University campus.

From left, Nicole Koch, Jessica Meeker and Brooke Heimerl prepare to sleep in their boxes.