Become a Member
Read Today's E-edition
Share This
Is this Decatur home haunted? The tale of the 'black ghost'
0 Comments
Share this
1 of 3 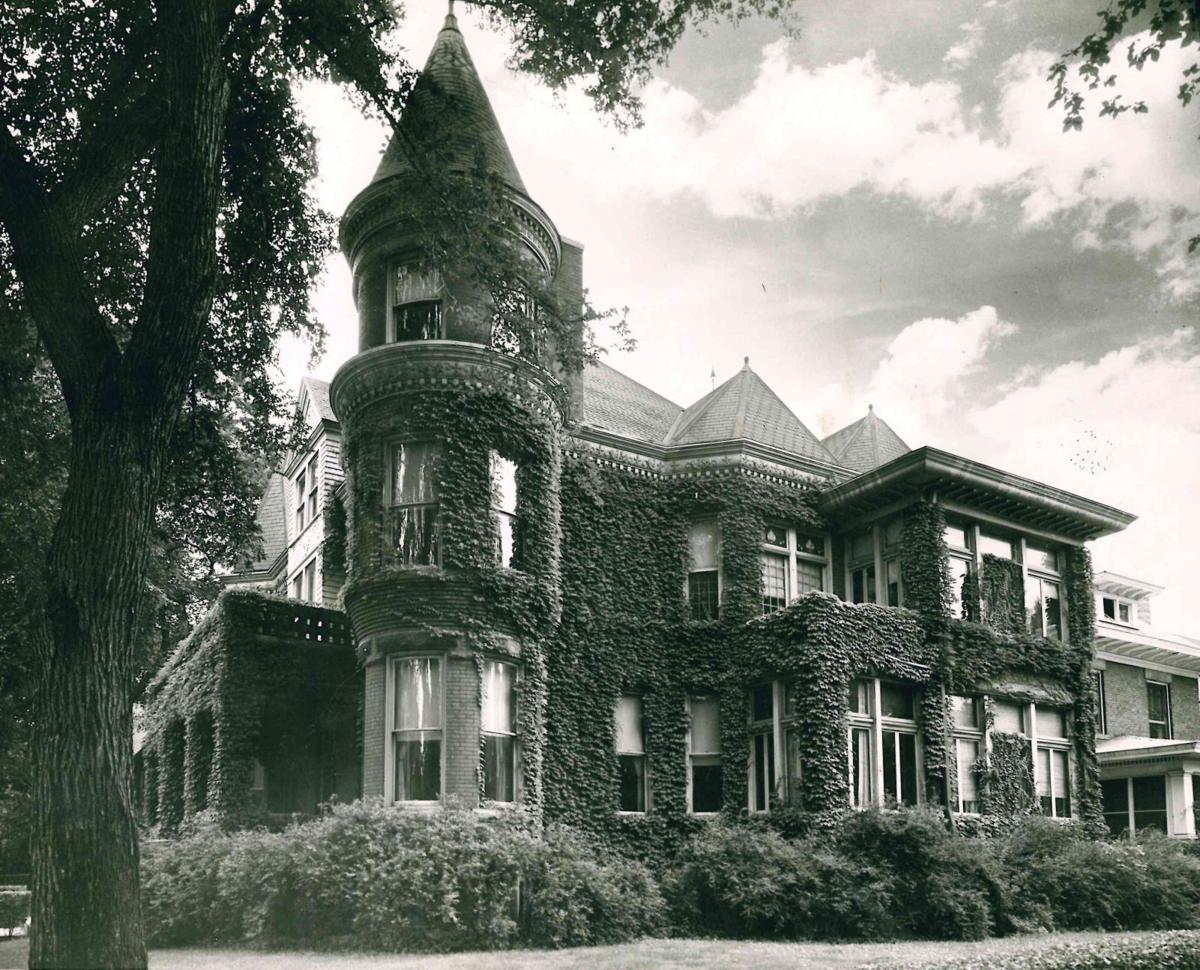 The Culver Mansion at 412 W. Prairie Ave. is said to be haunted by the black ghost. 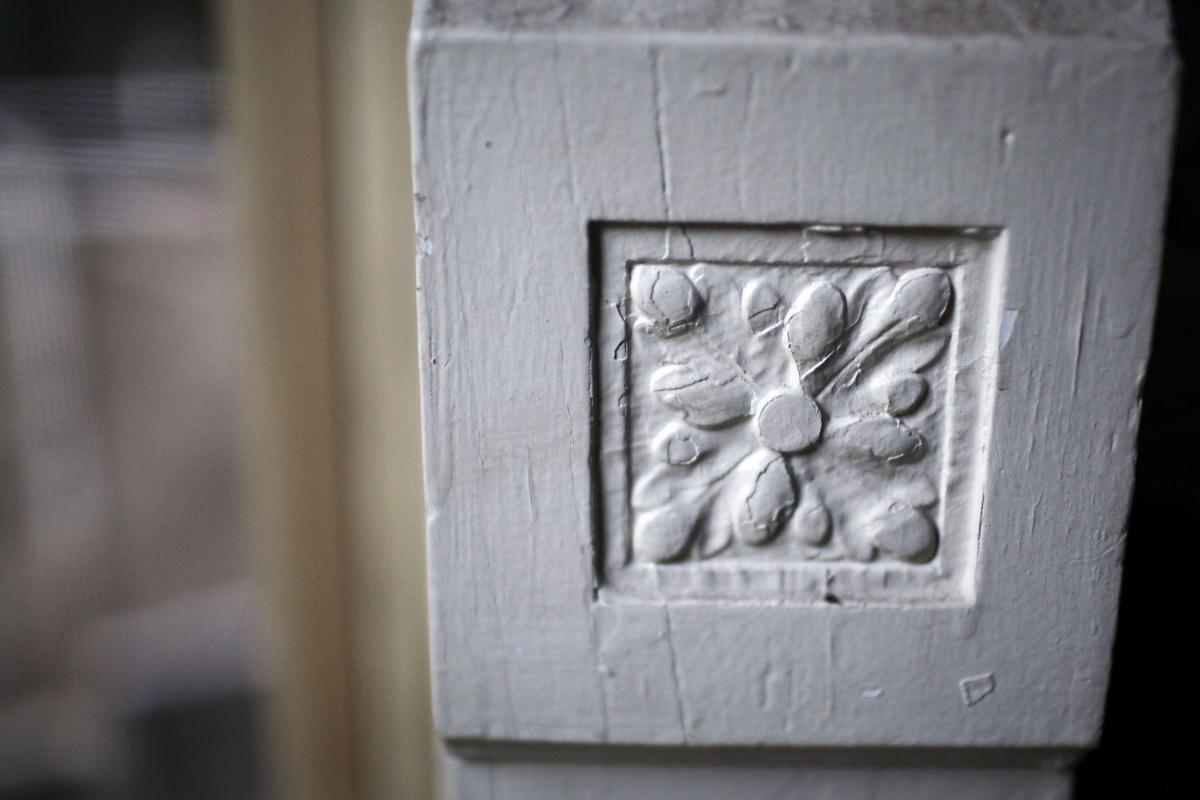 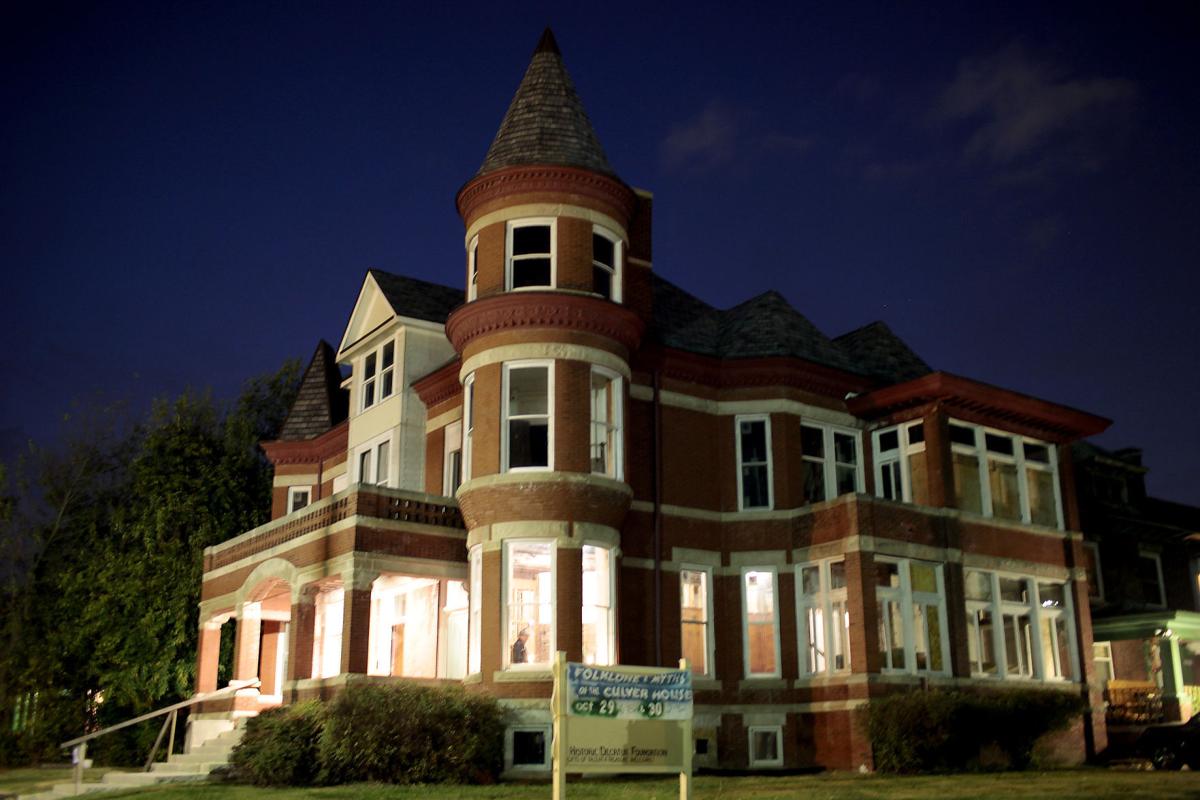 DECATUR — Florence Culver and her husband John were sitting down to dinner on a late-fall evening in 1903 when Florence was frightened to hysterics from what she witnessed come out of the fireplace.

According to Lynn Potter of the Historic Decatur Foundation, the story of what scared Florence in her home at 412 W. Prairie Ave. was passed down for years in the family’s oral history.

“She saw this black apparition,” Potter said. “It floated across room, through the wall, into the kitchen and then it disappeared.

“The next morning, she had John rip up that fireplace and brick it up to keep it from coming down the chimney again.”

Culver wasn’t alone in seeing something supernatural in Decatur in November of 1903. In fact, for a week, Decatur — particularly the West End — was terrified of a veiled black figure carrying a baseball bat. Some believed it was really a ghost, others said it was someone in costume.

There are many stories of hauntings in Decatur, but few that have received as much attention in the general public at the time of their appearances as the “black ghost,” which there are reports of as far back as 1880.

It was described in the Nov. 14, 1903 Decatur Herald as a: “Creeping thing with awful eyes which burn like fire, the face of the terrible creature covered with a veil adding to the frightful appearance of this ghastly something, bringing forth screams from the unaccompanied ladies of the west end of the city as they go to their homes.”

“I’m really not sure what the black ghost was,” Potter said. “But the Culvers weren’t the only ones who saw it, so there was definitely something going on.”

The Herald reported that some thought it might have been a man dressed in women’s clothes, but several witnesses noted: “The eyes are most fiery and piercing,” and that a veil fell over the head.

The next night the figure was seen, “peeping into the windows and prowling the bushes.” Groups of young men took to the streets looking for the figure, but no one was found.

Black ghost fervor reached its peak on Nov. 16. After having terrorized the west side, the black ghost moved east. The Decatur Herald reported:

“The black ghost. That is all the people are talking about, it is the one thing that men, women and children fear, and it is now even concerning the police.

“The wildest run ever made by the patrol wagon occurred last last night and it was because the officers were after the ghost. The black horses hitched to black covered wagon dashed into the blackness of East Eldorado at a rate of speed that was terrific all in order to catch the black ghost.”

In addition to its police chase down East Eldorado, it was nearly cornered by some “railroad boys” at Martin’s Restaurant (604 N. Jasper St.), and people all over the east side of town reported tapping at their windows, knocks at their doors and other mysterious sounds.

A girl named Lulu Williams was brought in under suspicion. She was described as, “18 and drunk.” She was quoted as saying: “Am I the black ghost? Of course I am. I am the one who has been scaring all these people and tonight I am drunk. I am glad that you have got me arrested for the ghost.”

The most detailed sighting came from Fred Travis and Del Hooey, employees of C.H.& D. freight house, at 6:20 p.m., just north of the intersection of Monroe and Cerro Gordo.

Travis: “Hooey and I were about halfway between Cerro Gordo Street and the railroad, on Monroe, when we saw an odd figure in front of us and coming in our direction. The thing that attracted my attention was the fact that the figure did not have the motion of a man walking, but seemed to glide along. Then I noticed that the face was covered with what seemed to be a black veil. Hooey and I at once concluded it was the ghost and we ran forward. The man or woman or whatever it was turned and ran the other way. When it moved north from us it still had that motion of gliding. I had a piece of board in my hand that I was taking home for kindling and I threw that at the figure but didn’t hit it. Just then the figure disappeared and I don’t know if it turned the corner and went out on the Wabash right of way or if it turned into a yard there. At any rate we could not find it and we made a search.”

Travis said the ghost was 5-foot-9 with broad shoulders and wore a nun’s habit with a veil. It was holding a stick 18 inches long. 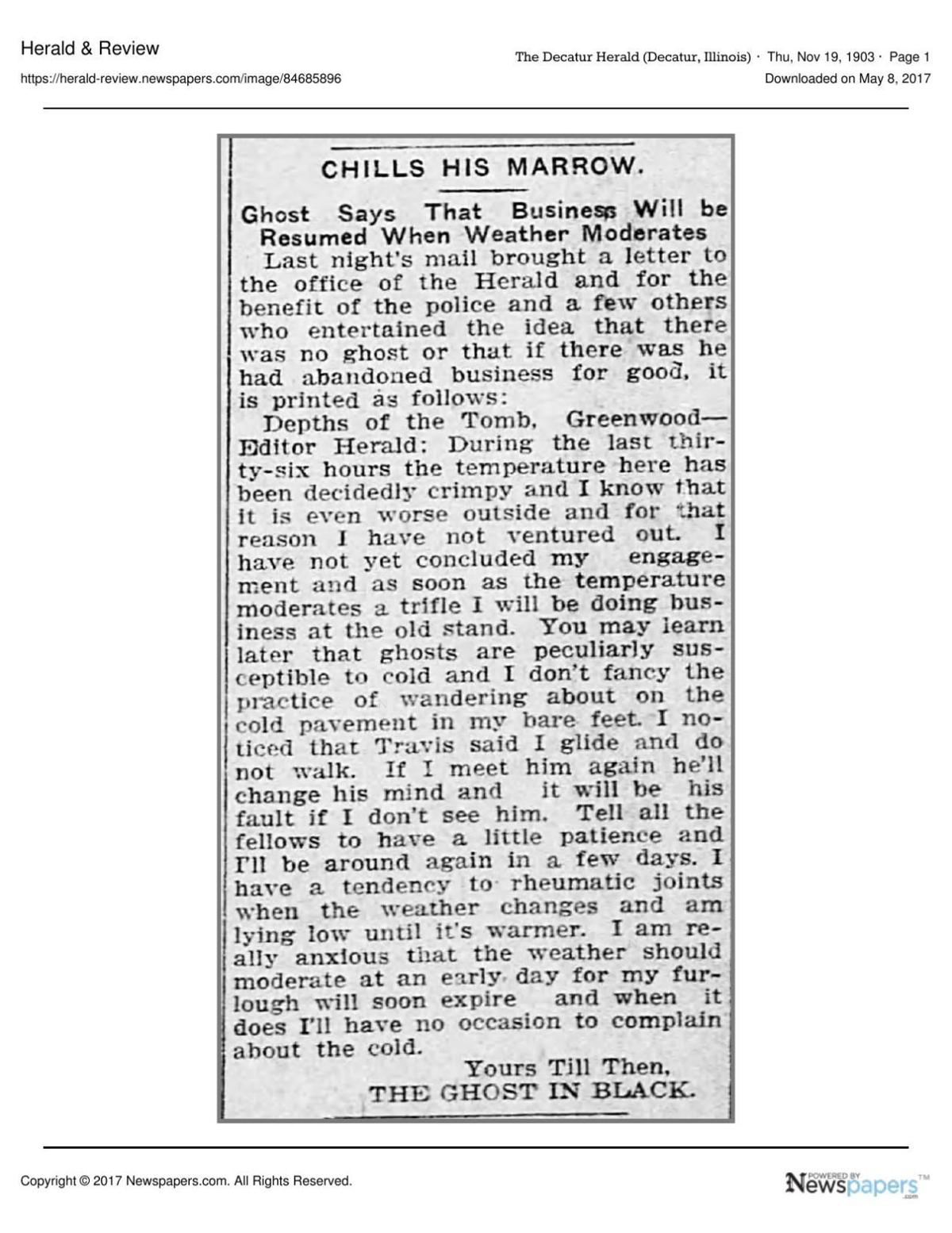 Decatur police chief Daniel Sullivan was skeptical of the ghost. He said the original ghost had been a woman trying to catch her husband with another woman, and that after the original had accidentally frightened a couple of people and the newspaper made mention of it, others took advantage of the ghost scare and went out to have some fun. Still, Sunday and Monday night the entire police force patrolled the outskirts in the hope of catching the ghost.

Though there were sightings in Warrensburg, then later Assumption, Oakland and Edinburg in the next year, the black ghost disappeared from Decatur. Maybe it was the chiding editorial that appeared in the Nov. 19, 1903 Decatur Herald: “Of course there is no ghost or anything except some idiot or crank trying to frighten people as alleged fun. He should be suppressed and the public should come to its senses.”

Or maybe it got too commercial. The Central Union Telephone girls enjoyed a ghost party at the home of Miss Benitta Livingston on South Walnut on Nov. 23. A couple months later, members of Post KTPA (the Knights of Pythias, a fraternal order) gave a ghost party at the K. of P. Hall in the Powers block. It was called the Reception of the Black Ghost, and after all had arrived, the black ghost was introduced. Then there was dancing, cards, popcorn, taffy and apples

At that point the black ghost had become a joke, but it’s at least a little creepy that there were similar supernatural sightings 23 years earlier.

In the early days of the Decatur Herald, the Dec. 31, 1880, edition contained the headline: “A ghost.” The story described several black citizens of Decatur near St. Peter’s African Methodist Episcopal Church, 515 S. Church St., seeing a, “huge, dark object, darker than the darkest night. It bore the general appearance of a gigantic man, headless and armless, and it moved swiftly, though it did not walk.”

A large number of people claimed to have seen it, even Macon County Board of Supervisors Commissioner Houston Singleton. Many believed it to be the spirit of Isiah Barrister, who had been murdered by Mike Hackett four years ago.

The ghost appeared in various shapes. At times it wore the garb of a man, and other times a shroud. It caused enough of a stir that, like in 1903, there was a large group on watch, with, “pistols, boomerangs and shillalys,” ready in case they saw something.

It was later noted that the appearance of the black ghost coincided with the disappearance of Frank McKinley’s chickens, which had caused the police to take interest.

The 1880 incident happened just before construction began on the Culver House. Those involved with the restoration of the Culver House the last 17 years have never seen a black ghost, but many of them have heard strange noises in the old mansion.

While construction began on the house in 1881, it wasn’t finished until after John Culver purchased it in 1901.

The house was converted into apartments, but it fell into ruin by the 1970s. A murder occurred in the Culver House in 1988, and there were also two suicides. Potter said the house was built on an “Indian burial ground.”

Letter from the black ghost

Depths of the Tomb, Greenwood -- Editor Herald: During the last 36 hours the temperature here has been decidedly crimpy and I know that it is even worse outside and for that reason I have not ventured out. I have not yet concluded by engagement and as soon as the temperature moderates a trifle I will be doing business at the old stand. You may learn later that ghosts are particularly susceptible to cold and I don’t fancy the practice of wandering about on the cold pavement in my bare feet. I noticed that Travis said I glide and do not walk. If I meet him again he’ll change his mind and it will be his fault if I don’t see him. Tell all the fellows to have a little patience and I’ll be around again in a few days. I have a tendency to rheumatic joints when the weather changes and am lying low until it’s warmer. I am really anxious that the weather should moderate an an early day for my furlough will soon expire and when it does I’ll have no occasion to complain about the cold. Yours Till The. THE GHOST IN BLACK.

The Bostonians performed “The Serenade” at the Grand opera house on Nov. 31. The Herald and the Bostonians held a contest for the “best verses for the song which referred to local affairs.”

One night while homeward striding,

It did arouse my utmost ire.

I grasped him by his ample crown

And struggling fiercely threw him down.

When I awoke, awoke to find

The ghost was of a pipe dream kind.

Fighting in my sleep

Where bravery is cheap.

When we awake, things are not what they seem.

I thought I’d caught a ghost,

But it was just an idle dream.

For more information on the black ghost and other Decatur history, go to herald-review.newspapers.com.

These poems, inspired by the black ghost sightings, were in the Dec. 1, 1903 Decatur Herald.

DECATUR — The Culver House is so old, the story of its rescue from demolition has become history.

DECATUR — Inspector Brad Gillmar walked into a room at Decatur Fire Department Fire Station No. 1, where Lt. Mark Allen was standing with seve…

One and only: The story of the meaning of 'Moweaqua'

DECATUR — It seemed like such a simple question: “What does Moweaqua mean?”

In Decatur's early days, the tragedy of Aquilla Toland

DECATUR — Aquilla Toland could have been remembered as one of Macon County’s most notable early residents.

DECATUR — Author Mary Lynn will host a launch party for her new book, "My Plot of Ground: The History and Legends of Culver House," at 6:30 p.…

The Culver Mansion at 412 W. Prairie Ave. is said to be haunted by the black ghost. 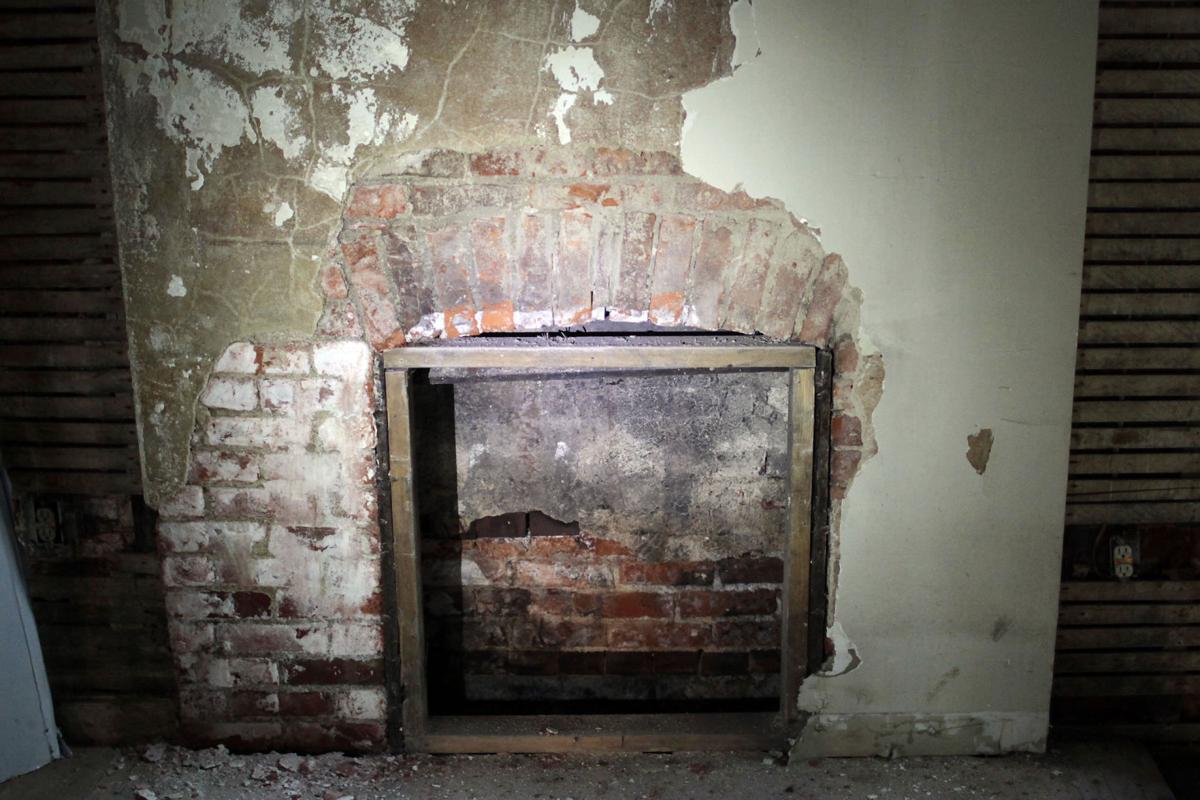 The fireplace where Florence Culver said she saw the ghost is seen in this 2010 file photo.