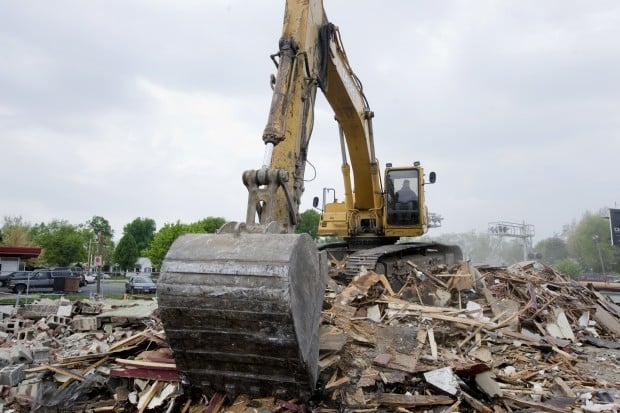 A piece of construction equipment scoops up the remains of Tom's Grill in Decatur. 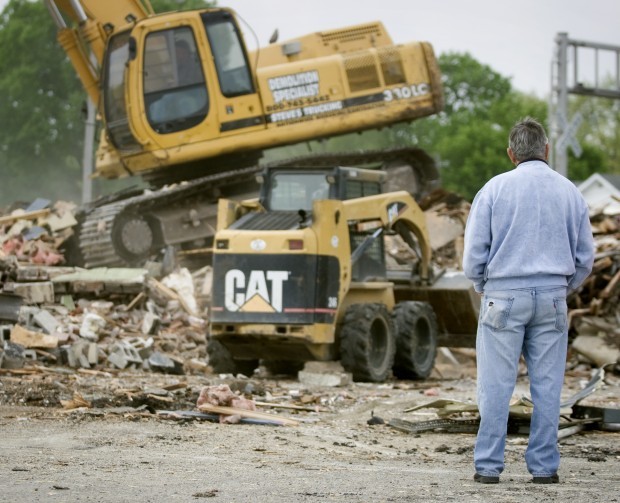 Dick Cain, owner of Tom's Grill, watches as demolition crews tear down his restaurant in Decatur.The establishment, built in 1935, was hit by a delivery truck last year and couldn't be renovated. 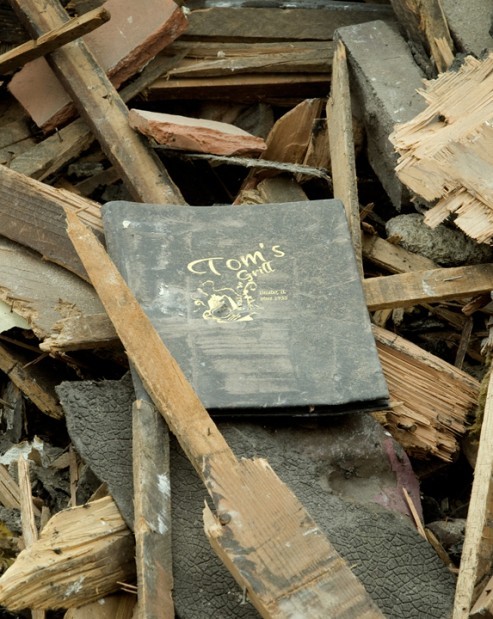 Herald & Review/Mark Roberts An old menu from  lies among the remains of the restaurant Wednesday April 4, 2012 in Decatur, IL.

DECATUR — As they stopped to watch the demolition of Tom’s Grill in Decatur on Wednesday, longtime customers including Stu and Jane Campbell recalled some of the many memories they have of the business.

Since it was built in 1935, the restaurant at 1856 N. Main St. was a place where customers could gather after softball games or a movie and dine on special occasions. For the Campbells, it was the place where they introduced their parents 44 years ago.

It continued to be where they would bring their children to drink Shirley Temples in later years, Jane Campbell said.

Their family picture was among those hung on the walls, remaining for 15 years.

“This is where we’d come on dates and stop before or after going to the movies,” Stu Campbell said. “It was our favorite place to eat in Decatur. It was a really romantic place and, by far, the best place for steaks.”

Watching as the demolition progressed through different rooms of the building, owner Dick Cain said it was a bittersweet day.

“Every scoop has some more memories,” said Cain, 71. “After 37 years, I think about how many times I’ve walked through that door.”

Cain enjoyed visiting with those who stopped by to see the work progress, including Decatur Mayor Mike McElroy and Decatur police Sgt. Greg Spain.

A crew from Steve’s Trucking took slightly more than four hours to bring down the aging structure, starting in the back before finishing in front. The process would have gone faster if the wood didn’t need to be separated from the bricks, Cain said.

To those driving by on North Main Street, the work might not have been apparent until the demolition reached the front of the building.

For a brief time, the tarp that had covered the front was removed so the front windows could be seen through once again. Moments before the front wall, which was part of the reason for the demolition, was brought down with a tap, a slow-moving train passed by, giving drivers a longer glimpse of what was happening than they otherwise would have had.

Being so close to a railroad track added to the restaurant’s charm.

“You could feel the vibrations as trains go by,” said Jim Peck, 76, former owner of Sims Lumber, who stopped by to show his support for Cain. “I have lots of good memories, but life goes on. It ran its course.”

Although it stood for more than 75 years, the fear of train vibrations becoming troublesome grew after a delivery truck hit the building in July. The top three rows of brick on the front wall collapsed a few weeks later, causing a dust storm so large that neighbors feared something had exploded.

Jason Fisher, who runs Fisher’s Auto Repair across the street, said he had hoped Tom’s Grill could be restored. Fisher especially enjoyed the restaurant’s twice-baked potatoes.

“It’s sad that it’s gone,” he said. “Dick had a great business. I wish somebody could have made it run.”

Cain sold Tom’s Grill and retired in 2005. Subsequent attempts by other operators to bring the business back to its previous glory fell short.

Wilbur Roosevelt used to run J&R Barber Shop, which started 50 years ago next door to Tom’s Grill. The restaurant helped attract a lot of customers to the area, as the parking lot would be full most Friday and Saturday nights, Roosevelt said.

“This is not the neighborhood it once was,” he said. “It was a great restaurant.”

Roosevelt credits Cain and Tom’s Grill founder Tom Morford for the work they did. Morford was a caring person, Roosevelt said, who would offer a free tray of food to customers who had a death in the family.

“That was the type of guy Tom was,” Roosevelt said. “He did a lot of good things.”

Roosevelt said somebody had called the shop last week looking for a booth from Tom’s Grill because they had eaten so many meals there.

By the end, Cain had cleared most of what remained out of the building. The last thing he took was a tinted mirror.

In the process, he found many keepsakes, including signs from the early days of the business. Cain found a collection of coins, business cards and menus under the old booths.

The barber shop was closed Wednesday and will be again today while debris is removed, before reopening Friday. The demolition is expected to be completed today as the large pile of what used to be Tom’s Grill is hauled away.

Watching the demolition brought back more memories for Cain, who noticed the charred wood from an exhaust fan fire in 1983. Other remnants of the fire previously were cleaned and repaired.

Cain does not have plans to rebuild, so the space will remain empty once everything is cleared.

Reflecting back, Cain said he is satisfied he made the decision to buy the business in 1975 at the age of 34.

“I don’t know how I got the nerve to do it,” Cain said. “Through the years, I didn’t have to do much advertising. I never ran a help wanted ad. To be in a business as tough as running a restaurant and to have the good fortune with customers and employees is really a blessing.”

The 36-year-old thought he was talking to the teenager, but police had taken over her phone to gather evidence, according to a sworn affidavit.

LaSalle County Coroner Rich Ploch said the office received the results Wednesday, but he declined to comment on the report’s content “due to the ongoing investigation.”

The victim said she heard about 10 gunshots before a bullet hit her home.

The body, shot multiple times, was found in an abandoned house in the 1200 block of East Condit Street

Self-taught and inspired by classic slasher flicks like “Halloween” and “Scream,” MacArthur High School freshman Brielle Jackson has been able to create movie-quality prosthetics with just flour, Vaseline and a lot of detail.

An 18-year-old Decatur man is facing preliminary weapons charges after police said he shot at the house of a neighbor who had been in a verbal dispute with his mother.

Watch now: Student tells Decatur school board: 'With so many fights, it's chaotic at times'

Student ambassadors to the Decatur school board on Tuesday again expressed their concerns about fights and violence in Eisenhower and MacArthur high schools.

A piece of construction equipment scoops up the remains of Tom's Grill in Decatur.

Dick Cain, owner of Tom's Grill, watches as demolition crews tear down his restaurant in Decatur.The establishment, built in 1935, was hit by a delivery truck last year and couldn't be renovated.

Herald & Review/Mark Roberts An old menu from  lies among the remains of the restaurant Wednesday April 4, 2012 in Decatur, IL.