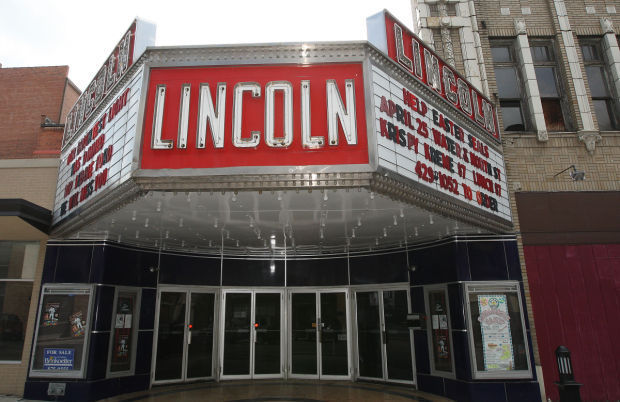 The Lincoln Square Theatre website is shown on Monday. The theater has struggled with fundraising and other issues.

DECATUR — The century-old Lincoln Square Theatre, a former movie house that has faced years of fundraising struggles and mounting maintenance costs, has again ceased operations and some board members have left.

Adam White has stepped down as president of the theater board and Vice President Jake Bonnett said he’s “in the process of resigning as well.” Bonnett declined to comment on the reason.

The latest volunteer board took over running the 141 N. Main St. space two years ago but has struggled with having enough money to run the aging theater. A key stop on "Haunted Decatur" tours and setting for a number of local ghost stories, the vast theater's red carpet and seats, lobby with original mosaic floor tiling and proscenium arch offer a glimpse into its storied past.

Lincoln Theatre board member Anne Thompson said, “Right now, we’re dark,” of the theater’s status but would not go into any more details about future plans.

Signs have been removed from the theater windows, and its former website address, lincolnsquaretheatre.com, was listed as potentially for sale.

After news of the closure became public Monday night, a post on the theater's Facebook page said the closure was temporary, and that the website was taken down for changes and would return. "We are only closed for the time being to regroup and come up with new ideas, as always we are welcome to hear your ideas as well," it said, thanking fans for their support.

Lincoln Square Theatre Inc. owns the property, according to Macon County records. It is registered as an active not-for-profit corporation with the Illinois Secretary of State's Office. Thompson is listed as its agent.

Its tax-exempt status was automatically voided in 2014 for its failure to file a Form 990-series return or notice for three consecutive years, according to Internal Revenue Service records.

Bonnett said Monday that the status was revoked while the theater was controlled by a previous board, but current board members are working with an accountant to regain the status retroactively.

He said the board pays federal taxes and sales taxes on candy and other items it sells. People who give money to the Lincoln can't currently claim those donations on their taxes, but Bonnett said that's what the board is working to remedy.

White and Bonnett had served as president and vice president of the organization's board for the past two years but had been volunteers for several years before that.

Following an inquiry from the Herald & Review, White released a statement on his resignation.

“For the last two years I have devoted all of my time to the theater,” White said. “With that, I have missed out on a lot of time with family, friends and goals that I would like to achieve before I get too old. I’m sad to go, but running a theater full time takes a lot of energy and time.

“The theater still holds a special place in my heart as we have made major changes and brought in major shows, movies and more in the last two years. I'm sure someone with the same drive I had will come along, and I wish the theater the best. It’s a great theater, with a good board with great ideas, and I’m looking forward to what they will be bringing next.”

Bonnett said he and White worked together to bring in several shows to the Lincoln, with White signing the acts and Bonnett coordinating the movies.

The Lincoln celebrated its 100th anniversary last October. At one time, with Decatur’s location as a hub between St. Louis and Chicago, the Lincoln drew big-name acts such as Bob Hope, Bing Crosby, Al Jolson, Chico Marx, Louis Armstrong, Davy Jones and Alabama.

But by the 1980s, the theater had become too dilapidated to host shows. The Decatur Education Association met there during the 1986 teachers' strike before renovations finally began in the 1990s.

In 2002, the state granted the Lincoln $3.5 million for renovations but didn’t deliver the full amount until 2005. At that time, the theater had seats missing, paint and plaster falling off the wall, a damaged stage and no fire escapes. The first phase of renovations corrected these problems as well as adding air conditioning and lighting, fixing bathrooms and dressing rooms and repairing the marquee.

The theater closed in 2005 for additional renovations and has been open on and off ever since. Finding consistent revenue to pay the bills and problems with the lighting and boiler systems have kept it struggling. Keeping the Lincoln warm has been an ongoing problem since 2011.

The space sat dormant for more than a year between 2014 and 2015 before the board decided to begin offering more events to generate revenue.

“A lot of people just don't realize that we are showing shows again,” White told the Herald & Review in July 2015. “But we're hoping to show the community: 'Hey, we're here, and we're here to stay.' ”

Tim Cain: Much to ponder about Lincoln Square Theatre 🎦

When anyone mentions the Lincoln Square Theatre, the first thing we need to do is strictly frame the topic of discussion.

DECATUR – Over the years, legend and fact have become bound at the Lincoln Square Theatre, a historic landmark of downtown Decatur.

DECATUR – For a few hours a night, the marquee at the Lincoln Square Theatre illuminates downtown Decatur.

FROM THE ARCHIVES: Looking back at Decatur's Lincoln Square Theatre

Our opinion: Story remains the same with Lincoln Theatre

That story about the Lincoln Square Theatre's closure on the front page of Tuesday's Herald & Review wasn't a reprint. It only feels that way.

DECATUR — More than a year since the iconic Lincoln Square Theatre closed its doors in downtown Decatur, there's no reopen date in sight as th…

The Lincoln Square Theatre website is shown on Monday. The theater has struggled with fundraising and other issues.