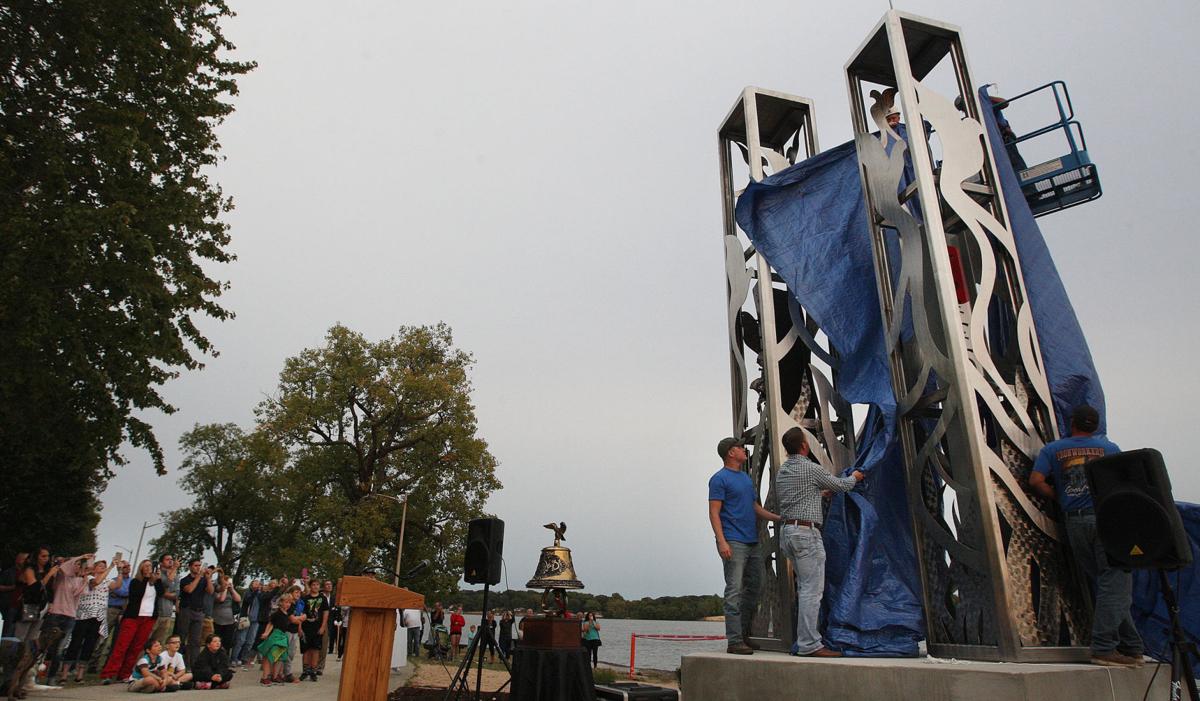 The Nelson Park 9/11 memorial is unveiled during the dedication ceremony Monday evening. Online gallery at herald-review.com/gallery 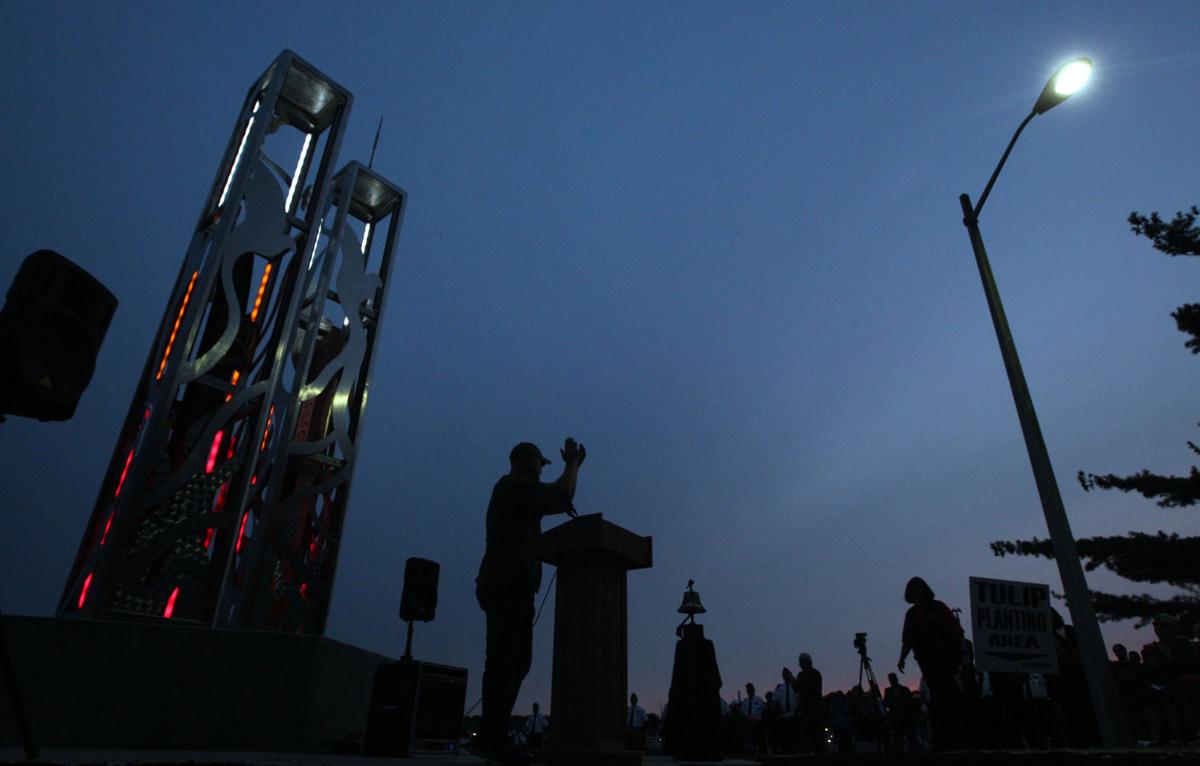 Veteran Corey Kistner leads applause for fellow veterans in attendance after speaking to the audience about his 9/11 experience during the Nelson Park 9/11 memorial dedication ceremony Monday evening. Online gallery at herald-review.com/gallery 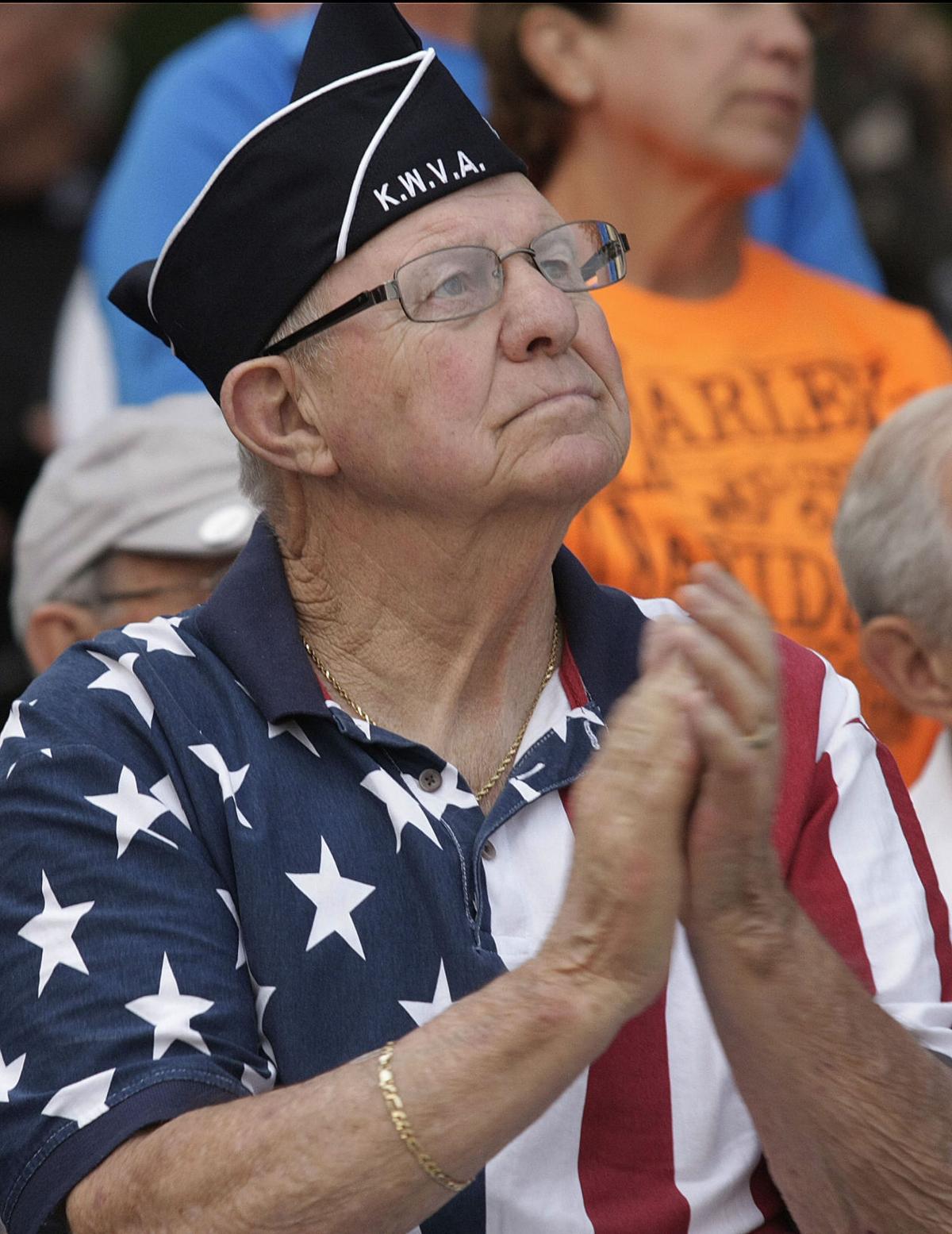 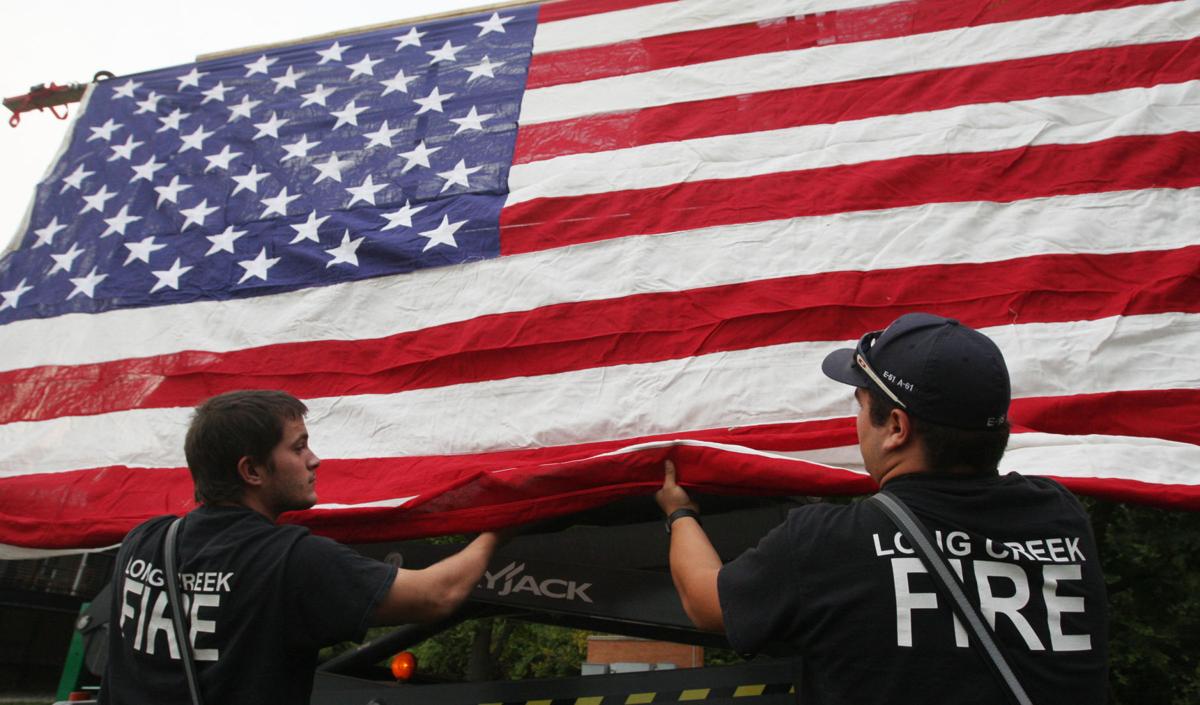 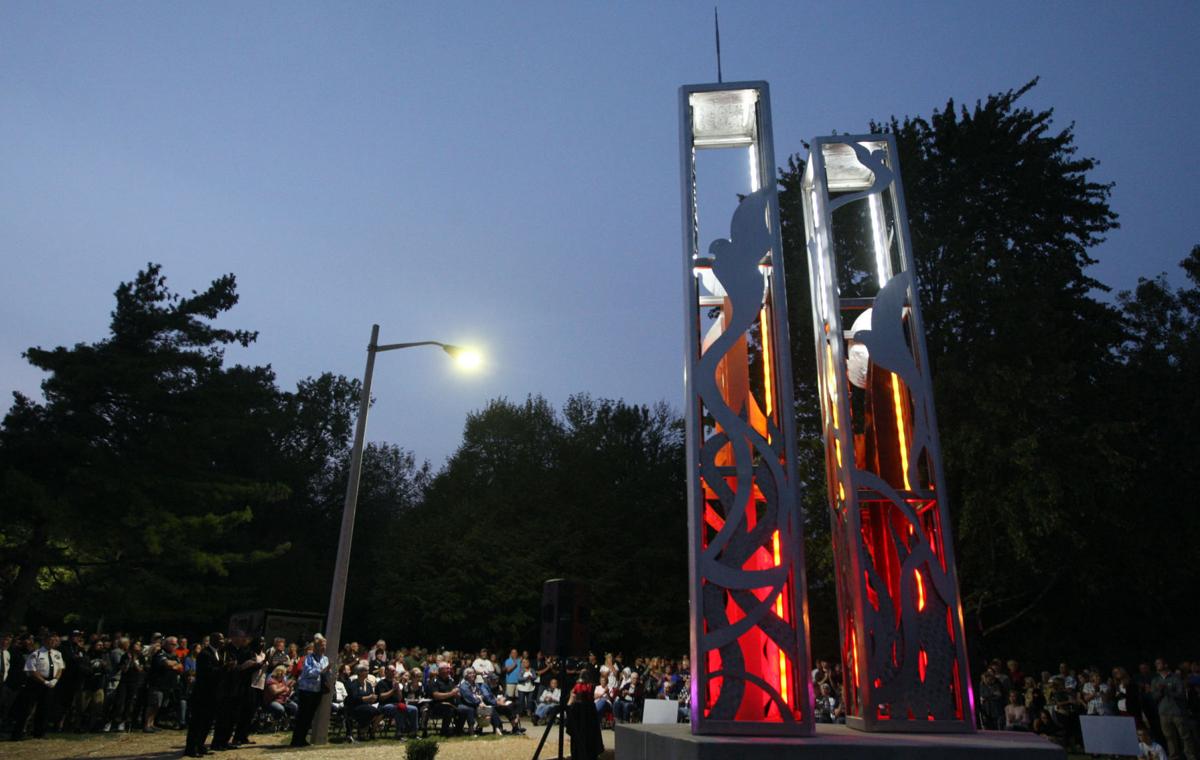 The Nelson Park 9/11 memorial is illuminated as the sunsets during the dedication ceremony Monday evening.

DECATUR — As they waited for the blue tarps to be removed from the 9/11 memorial late Monday afternoon, Jim and Judy Oettel took pictures of the covered structure.

The Decatur couple said they first learned that the memorial would be revealed during a public unveiling earlier that morning, and decided to attend the event as a way to pay homage to those who died during the Sept. 11 attacks 16 years ago.

"I think it's great that Decatur has this," Jim Oettel said of the memorial. "I think it'll help all of us remember 9/11."

Time passed, and a large crowd gathered at the memorial site on the Nelson Park lakefront to watch as the tarps were eventually removed to reveal the shining, stainless steel structure in its finished form.

Standing at nearly 30 feet tall, with a steel I-beam recovered from the World Trade Center incorporated into its design, the memorial was greeted with a round of enthusiastic applause from those who attended.

"We live in the most giving and caring community in the state of Illinois," said Lt. Jon Butts of the Macon County Sheriff's Office. "This (memorial) is another symbol of it."

Butts was among several speakers who addressed the crowd and discussed the importance of having the memorial in Decatur. Others included sheriff's office Lts. Antonio Brown and Jim Root, Mayor Pro Tempore Dana Ray, who declared Sept. 11 as a day of service and remembrance in the city, and Corey Kistner.

Kistner, a United States Marine Corps veteran who was deployed to Afghanistan after the Sept. 11 attacks, reached out to memorial organizers and helped raise funds after learning about the project.

"I knew that I had to be involved, because I had to remember all of the people, including my fellow veterans and my fellow Marines, who gave that ultimate sacrifice," he said.

The unveiling of the 9/11 memorial comes about two years after the George A. Mueller Beer Co. led a strong campaign to bring the salvaged I-beam from New York to Decatur.

Lauren Axe, liaison for the memorial, said the odds of Decatur receiving a piece of steel recovered from Ground Zero were initially slim.

"It didn't look that good, but we kept calling, we kept talking, and in September of 2015, we were awarded the 15-and-a-half foot I-beam," she said.

When the beam arrived to Central Illinois on Oct. 25, 2015, it was always intended to become the centerpiece for a monument. Through several fundraising efforts, including patriotic tattoos by Oakwood Tattoo and a Mardi Gras donation from St. Patrick's School, the people of Decatur helped organizers raise the $70,000 needed to build the memorial.

"This memorial is built largely in part by $20 donations here and there but the generous members of our community who left their mark on this beautiful memorial for the years to come," said Cromwell Group Program Director Storm Edwards, who served as a memorial liaison.

On July 5, the Decatur Park District Board approved the proposed lakefront location for the memorial, and its construction began on Aug. 1. While the E.L. Pruitt Co. built the steel Twin Towers that make up a majority of the memorial, more than 70 union workers volunteered to put it all together.

In addition to the memorial, a time capsule was buried under the lawn of the Macon County Courthouse. Organizers and attendees held a small ceremony dedicating the capsule before heading to Nelson Park to unveil the memorial.

Looking forward, Kistner said that he hopes the memorial will not only be important to those who experienced 9/11, but also to future generations as well.

"Hopefully, they can feel that feeling, and feel connected to all of those people who gave their lives," he said.

If you'd like to donate toward the memorial by purchasing an engraved memorial brick or a park bench, visit 911decaturmemorial.org for more information.

Read about a breakfast for first responders in Shelbyville and donated flight for the cause at Decatur Airport, page A3

Consider all that is going on here and in the world right now.

DECATUR — With the exception of its black granite base, organizers said a majority of the nearly 30-foot 9/11 memorial on Nelson Park’s lakefr…

DECATUR – The Decatur 9/11 Memorial is a step closer to reality.

DECATUR — So many people lined up outside Oakwood Tattoo on Friday, even before the shop opened, that they were given numbers.

Never forget: Decatur 9/11 memorial's journey chronicled in time capsule to be unearthed in 2055

DECATUR — Harriet Sadowski of Decatur sharply remembers the moment she was called to assist in relief efforts after the Sept. 11 attacks 17 ye…

A missing bench was discovered in Lake Decatur a few feet from the memorial and a maintenance crew from the Decatur Park District retrieved it. The memorial itself was not harmed.

The Nelson Park 9/11 memorial is unveiled during the dedication ceremony Monday evening. Online gallery at herald-review.com/gallery

Veteran Corey Kistner leads applause for fellow veterans in attendance after speaking to the audience about his 9/11 experience during the Nelson Park 9/11 memorial dedication ceremony Monday evening. Online gallery at herald-review.com/gallery

The Nelson Park 9/11 memorial is illuminated as the sunsets during the dedication ceremony Monday evening.