BLOOMINGTON — The passengers in the plane that crashed near Lincoln two weeks ago were out to see a bald eagle nest in the area, but officials do not yet know what caused the crash that killed three men, according to a preliminary report from the National Transportation Safety Board. 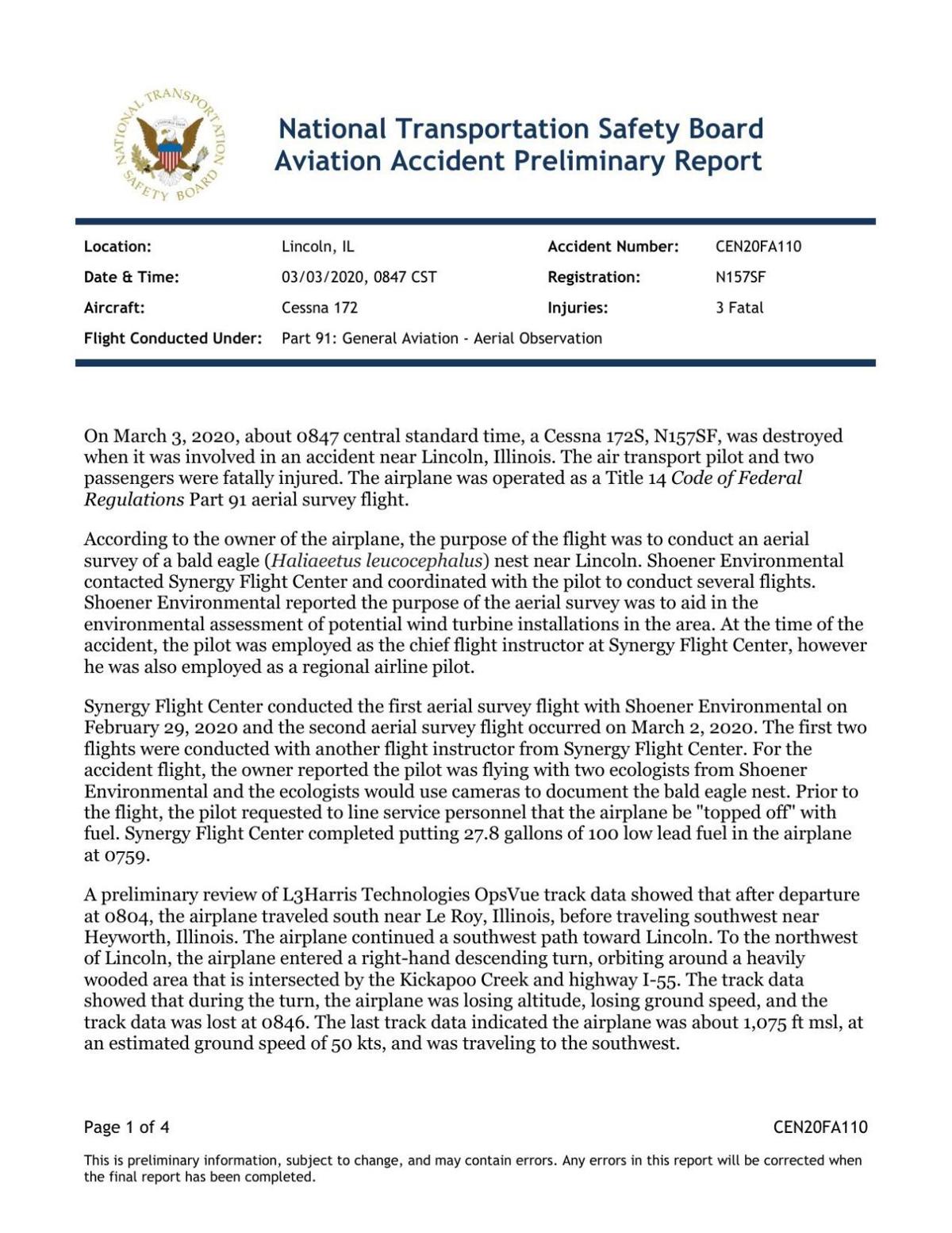 The four-seat, single-engine Cessna 172 flight that departed from Bloomington was the third in a series of flights coordinated between Synergy Flight Center and Shoener Environmental Inc.

The last information showed the plane traveling at 52 ground knots. The NTSB cited the Cessna 172S handbook as saying the stall speed for flaps-up position is 53 knots and 48 knots for flaps down.

The two passengers, Kevin Chapman, 30, of Urbana, and Matthew Hanson, 33, of Pulaski, Wis., were both ecologists at Shoener; the pilot, 22-year-old Mitchell Janssen, was the chief flight instructor for Synergy.

“Shoener Environmental reported the purpose of the aerial survey was to aid in the environmental assessment of potential wind turbine installations in the area,” according to the report.

Chapman and Hanson would shoot photos of the bald eagle nest near Lincoln during these flights. At Florida Atlantic University, Hanson wrote his thesis on bald eagles and his friends referred to him as a “bird nerd,” according to his obituary.

The first two flights were conducted with another flight instructor from Synergy.

Preliminary review of the tracking data shows after their departure at 8:04 a.m., the plane traveled south near LeRoy, then southwest near Heyworth. They continued southwest toward Lincoln.

When they were northwest of Lincoln, the plane “entered a right-hand descending turn, orbiting around a heavily wooded area,” which is intersected by Kickapoo Creek and Interstate 55. The data shows during that turn the plane was losing altitude and ground speed; the tracking data was lost at 8:46 a.m., within one minute of the fatal crash.

NTSB will not be able to say what caused the crash or any other analysis found in the investigation for 12- to 18 months, an official said last week.

According to the report, Synergy found no abnormalities in the fuel during post-accident testing. NTSB found no evidence of low-level wind shear, which is a change in wind speed or direction within a short distance, near the accident site at the plane’s height when it turned.

Aerial work, including photography, requires “a significant division-of-attention” at low altitudes with pilots using their best judgment, “but if something goes wrong there is little time to recover,” according to a maneuvering flight guide by the Aircraft Owners and Pilots Association Air Safety Foundation, which was quoted in the NTSB report.

Reporter Sierra Henry talks about developing stories from The Pantagraph ...

The airplane involved in the crash that left three dead in Lincoln Tuesday has been identified as a single-engine Cessna 172.

Wendy Coit-Remington, manager of the Dunkin location on Woodlawn Road in Lincoln, discusses the plane crash on Interstate 55 on Tuesday.

Employee near Lincoln plane crash: 'You could see the smoke'

The manager of a business near the site of Tuesday's plane crash in Lincoln said they initially thought the incident was a farmer working in fields.

Pantagraph staff give update on plane crash after speaking with local businesses and Fire Chief Chris Buse, with the Lincoln Rural Fire Protec…

Photos: Firefighters respond to airplane crash on I-55 near Lincoln

Firefighters respond to an airplane crash on I-55 near Lincoln

The plane crash that killed three in Lincoln Tuesday occurred about six miles from the site of an emergency landing two years ago.

Authorities are trying to determine what caused a small plane to crash onto Interstate 55 Tuesday morning, leaving three people dead. The accident snarled traffic for hours on the west side of Lincoln.

State police: Plane that crashed had taken off from Bloomington

Three people were killed Tuesday when a small plane crashed into Interstate 55 near Lincoln. Here's what we know so far about the incident:

A look back at Central Illinois aircraft crashes

Central Illinois has seen its share of plane crashes

NTSB to release preliminary report from fatal crash outside Lincoln

Investigators from the National Transportation Safety Board have left the scene of the fatal plane crash outside Lincoln and will issue a preliminary report in the next few days.

As investigators continue to search for the cause of a fatal plane crash outside Lincoln, authorities on Wednesday released identities of the three men who were killed.

State police: Plane that crashed had taken off from Bloomington