DECATUR — When Angie Goode starts her work day, it is already dark outside.

After a briefing with supervisors about upcoming training sessions, she takes a seat in front of six computer screens and puts on her headset. She picks up an incoming call.

“CIRDC,” she says. “What is the address of your emergency?”

As a dispatcher at the Central Illinois Regional Dispatch Center, Goode helps people during the worst moments of their lives. Shifts are 8-16 hours, and dispatchers can field anywhere from 30 to 150 calls a day for eight law enforcement and 17 fire agencies. Most interactions end without the dispatcher receiving any details of the outcome unless they recognize a name in an obituary.

Today marks the start of National Public Safety Telecommunicators Week, designed to honor the public servants like Goode who often go without recognition. The work is not for everyone: Nationally, the U.S. Bureau of Labor Statistics says job prospects are good, because many leave the field due to the high stress and demanding schedule.

“What keeps you going is knowing that you’re helping people more often than not, and there are still so many people you get to help,” CIRDC Communications Manager Amber Adams said.

Until Jan. 1, 2018, the city of Decatur handled dispatching for the Macon County Sheriff’s Office, county fire departments and others out of a windowless room in the Law Enforcement Center on South Franklin Street in downtown Decatur. The city and county agreed in 2017 to move to the regional center, which is governed by a board that includes representatives of both governments.

Later in 2018, dispatchers moved to a new, 75,000-square-foot facility funded by a $4 million donation from the Howard G. Buffett Foundation. It was built at 1078 Rotary Way, next to the Law Enforcement Training Center that was also funded by Buffett, a former Macon County sheriff.

The new facility has plenty of space, adjustable and ergonomic equipment, and new furniture and technology. It houses 25 dispatchers and four more who are in the training process.

Goode, who has 24 years of experience, said she feels as though callers often don’t realize they are speaking to someone from the community. “Outside of work, we are walking right next to these people in the grocery store,” she said.

Like most people, dispatchers can walk into work after leaving a sick child at home or having just gotten in a fight with their spouse.

“None of that is supposed to matter. Our job is to help them and that’s what we are going to do no matter what,” Goode said.

Dispatchers have to be able to multitask while considering what is happening on the other end of the line, particularly when it comes to children.

“A child could be calling in and they are hiding in a closet giving you information,” Goode said. “You need to ask them the right questions while dispatching the call to the police department, all without risking them being found.”

A lunch break means finding ten minutes to have a snack. They need to rotate and cover calls for one another just to use the restroom. When there are particularly stressful calls, they might be able to find a small window of time to take a moment to themselves in the quiet room or blow off steam in the workout room. These amenities just recently became available to the staff since relocating to the updated facility last year.

Dispatchers can be some of the most challenging employees for local governments to hire and keep, according to call center managers across the country. In Columbus, Ohio, city officials last year said dispatchers were working 70 to 80 hours a week because of short staffing. Ingham County, Michigan, spent about $1 million per year on overtime costs at its dispatching center between 2013 and 2017.

Agencies have sought different means to fill the gap. The Portland Regional Communications Center in Maine started offering a $10,000 sign-on bonus. In Schenectady County, New York, the governing body moved this year to relax a residency requirement so that it would be easier to recruit.

Decatur’s dispatch center has faced similar problems in the past. In 2012, dispatchers were working an average of 400 hours of overtime per month, and the city of Decatur struggled to keep its 20 dispatching positions filled.

Circumstances have improved. Adams said turnover has decreased since the center changed ownership and moved to its new location. Much of the difference has been made by finding the right employees.

“The intense training, long hours and nature of the job can turn a lot of people away,” she said, “but we’ve been very fortunate to come across the people we have now who are great at what they do.”

There are occasional lighthearted moments that break up the workday and more entertaining calls, like one instance of someone calling in asking how to spell a word. (Don’t try this at home: Making a 911 call without a situation that could result in an emergency is a violation of Illinois law.)

The CIRDC staff keep one another positive with themed weeks and a “Kudos Board” where dispatchers receive special recognition for challenging moments. Goode is a member of the staff’s running team and is active with her church.

“You need to do something else to keep your mind occupied right after work,” she said.

‘Take a deep breath and listen’

Training can take up to a year and includes certification as an Emergency Medical Dispatcher, a role that allows dispatchers to help callers with medical situations from how to respond to allergic reactions, to administering CPR, to delivering a baby.

Emergency medical dispatching, or EMD, also walks dispatchers through how to handle especially devastating situations, such as a caller finding a loved one dead.

“I never tell anyone to calm down. I tell them, ‘Take a deep breath and listen to me,’” dispatcher Alex Kralman said.

Dispatchers juggle covering radios, sending information to police and fire departments, while administering medical dispatch in many cases. For instance, if someone calls in with chest pains — one of the most common emergency calls in Macon County — the EMD Protocol guides dispatchers through a series of questions to determine the severity of the caller’s condition, what equipment emergency responders need to bring and what steps they will follow when they get there. Dispatchers also ask questions that might help police, emergency responders and firefighters prepare for a situation where their safety is compromised.

It’s not uncommon for people to decide at some point during the training that they are not a good fit for the role, Goode said.

Before dispatchers implemented the medical training, Decatur firefighters responded to all calls in the city. The new system allows them to rank the seriousness of calls and determine how many, and what kind, of crews to send.

The result has been a reduction in the number of calls for the Decatur Fire Department, which has seen record numbers in recent years despite a declining population. Through the end of March, the Decatur firefighters responded to 145 fewer alarms than the previous year, Chief Jeff Abbott told city council members in a recent memo. If the alarm numbers keep pace, the department will respond to around 600 fewer alarms in 2019 than the prior year.

“The main goal is to help the caller in any way we can and get officers and responders home safely at the end of the night,” Goode said.

Decatur police Chief Jim Getz said dispatchers play a crucial role in getting officers to a scene in a timely and efficient manner.

“Our dispatchers are invaluable,” Getz said. “We would not be able to do what we do without them.”

Dispatchers participate in continuing education and training throughout their careers, including sessions held at the CIRDC.

Because the dispatchers work and live in the community, there are instances when they might answer calls about their neighbors, friends from church and even their own family members. In those cases, Adams said they do their best to get the dispatcher out of the call center and home to be with his or her family.

In 24 years, Goode did not have a call that truly rattled her — until recently. She described helping a man who thought he had hit a deer with his vehicle, but he had actually hit a pedestrian.

“As I am walking him through how to check if the pedestrian was breathing, I hear another car drive by,” she said. “I heard the car hit the person lying on the ground.” Goode said she managed she to keep it together during the call, but got sick afterward.

“I take home invasions where someone is being beaten and their pockets are being rifled through, those calls bother me,” she said, “but this call truly got to me, because this man was genuinely trying to help this person when it all went wrong.”

When Goode leaves the center around 6:45 a.m. just after the sun rises, she goes for a run with her husband instead of going straight to bed like most would.

She knows she would not be able to sleep.

“If all we did was go to this job, go home, sleep and repeat,” she said, “we would not get anything else out of life.”

FROM THE ARCHIVES: A look back at Decatur police through the years 🚨

To thank a dispatcher

To participate in National Telecommunicators Appreciation Week by thanking dispatchers for all they do, you can send a letter to:

When calling 911 in an emergency, remember:

Our question to Decatur city council candidates: Why should residents vote for you?

DECATUR — The private foundation of Macon County Sheriff Howard Buffett plans to announce "an unprecedented investment" in the community, the …

DECATUR — A Decatur man who was treated in hospital after a fight in a Decatur bar parking lot early Sunday declined to press charges, police said.

DECATUR — Decatur Olde School Sounds and Impersonators will be back on stage featuring some of the most iconic Motown and blues personalities.

EFFINGHAM — The difference between bluegrass and mountain music is recognizable in the music of Chain Station. 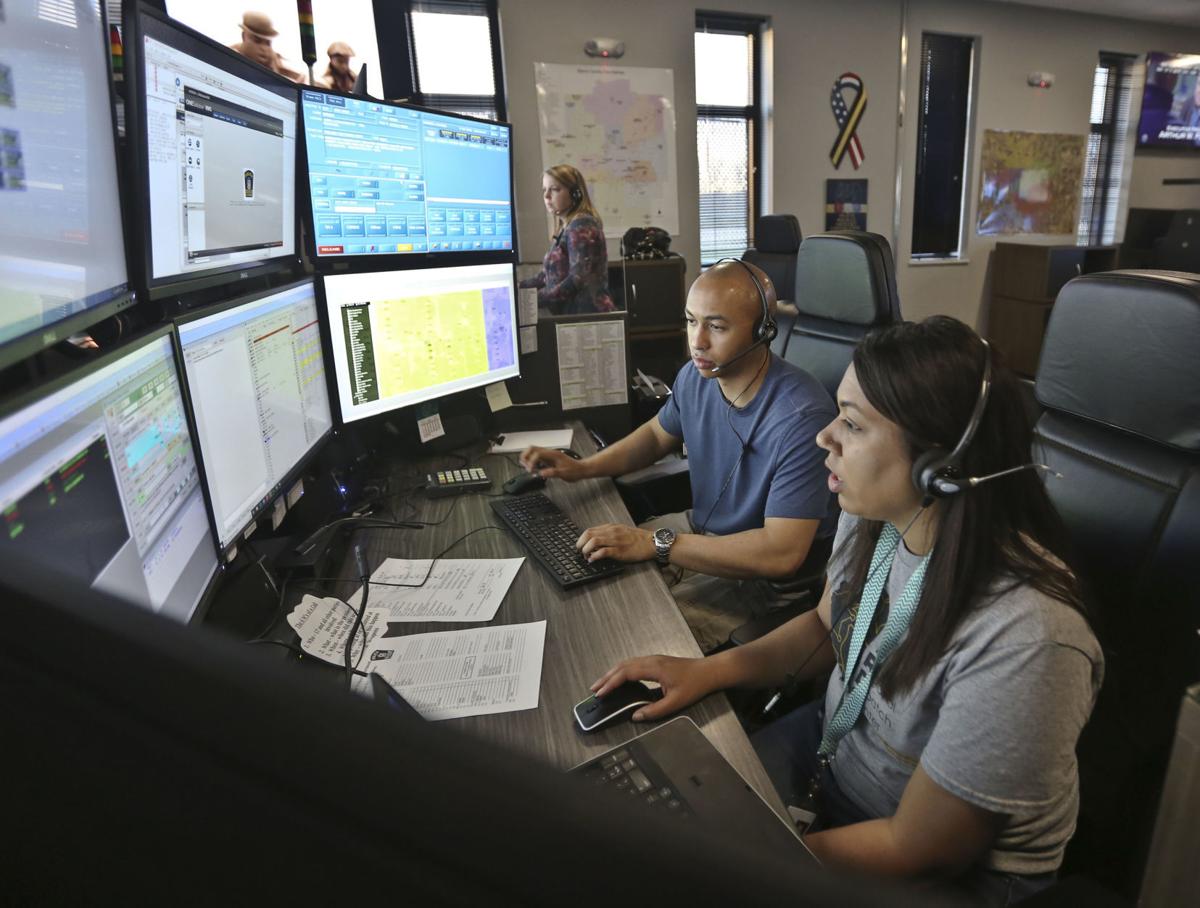 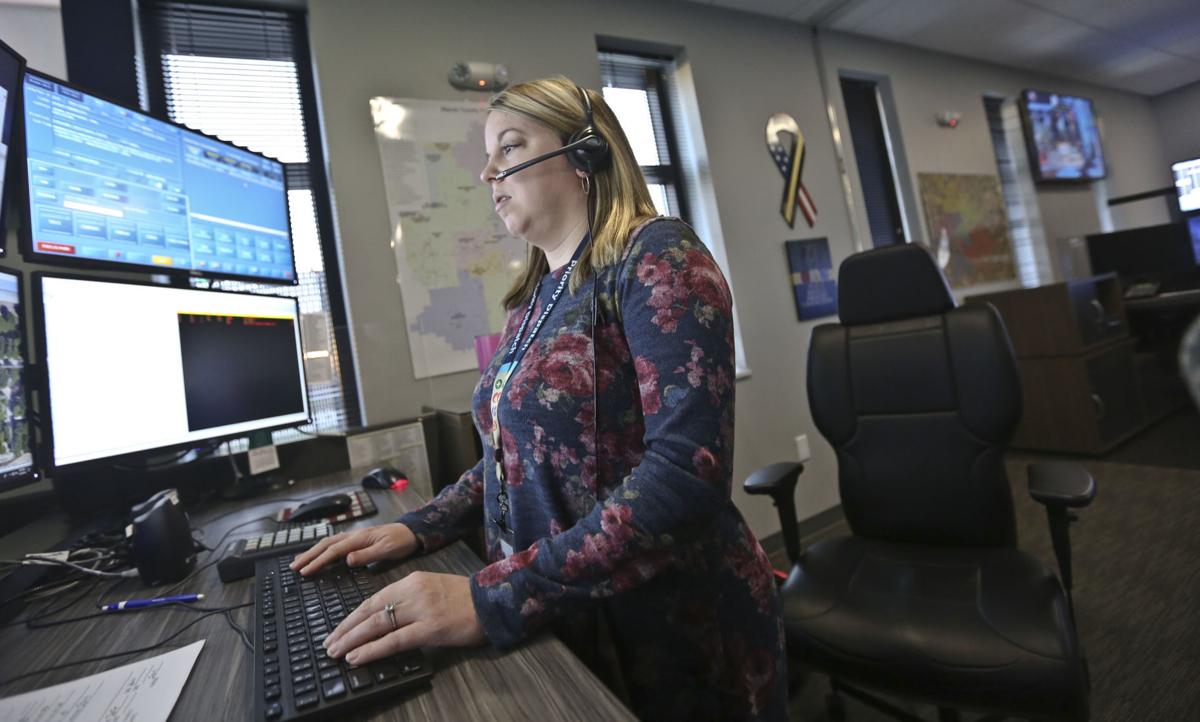 Communications manager Amber Adams answers calls on Wednesday at the Central Illinois Regional Dispatch Center in Decatur. Adams said turnover among emergency dispatchers has decreased since they came under new management in 2018. 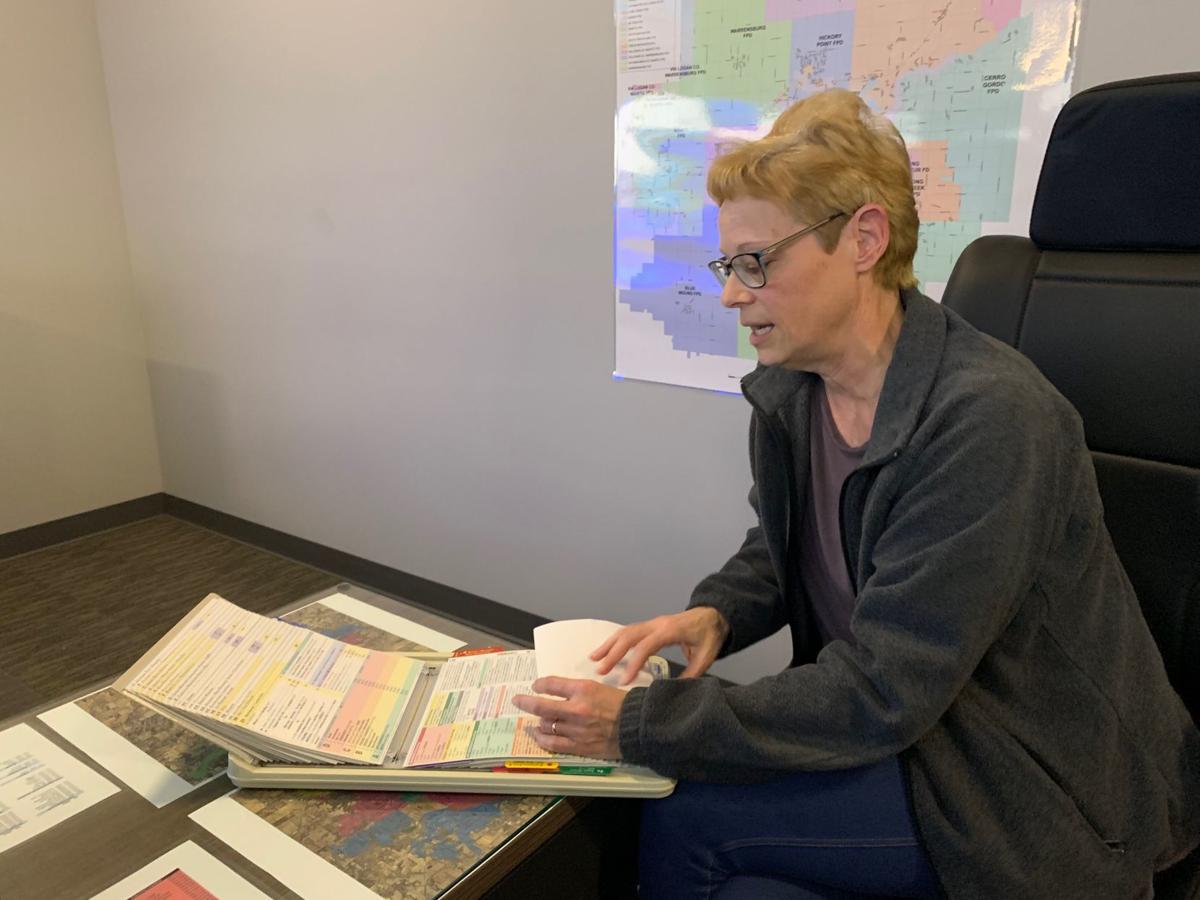 Angie Goode, a dispatcher for 24 years, thumbs through the emergency medical dispatching protocol that helps her guide callers through medical emergencies. 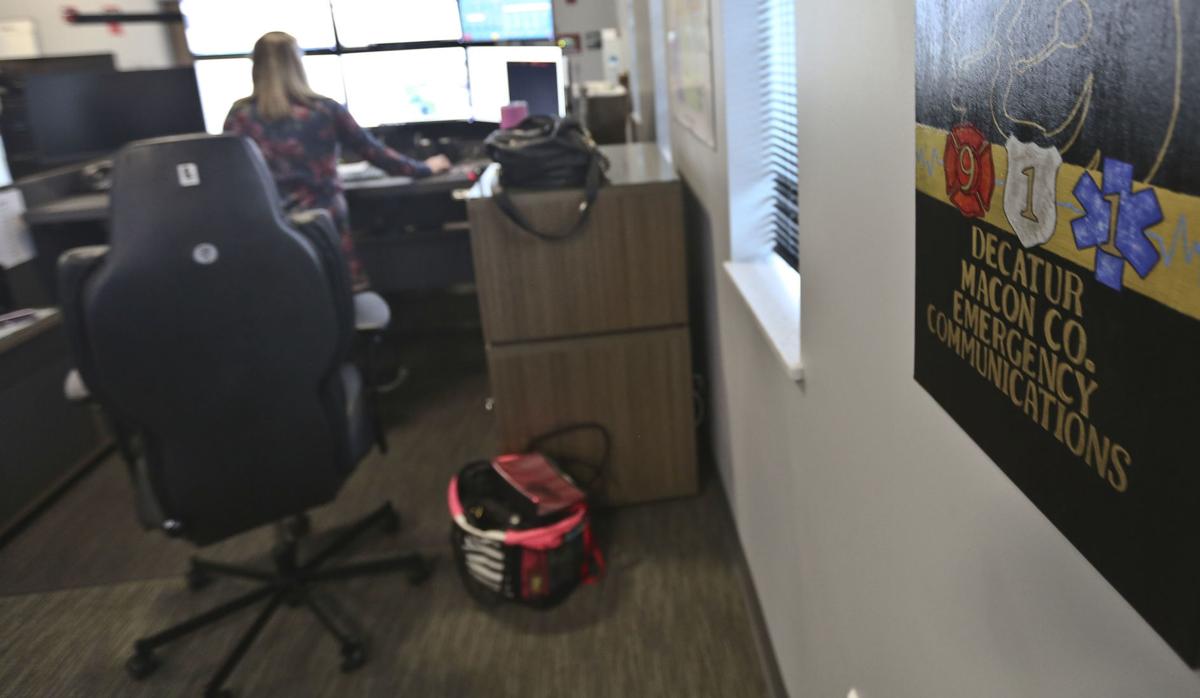 An emergency communications specialists answer calls on Wednesday at the Central Illinois Regional Dispatch Center. The facility, which opened last fall, has more space and light than their former home in the Law Enforcement Center in downtown Decatur. 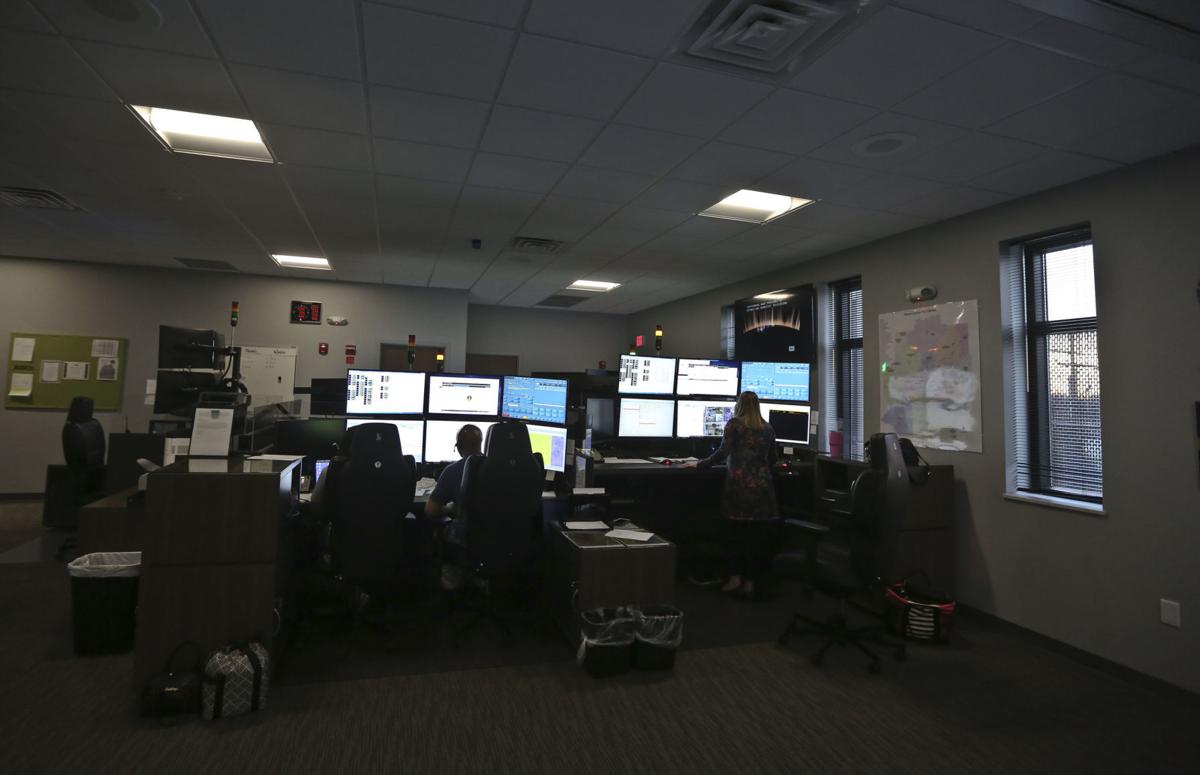 Dispatchers in the Decatur facility work shifts that range from 8 to 16 hours, and they can field anywhere from 30 to 150 calls a day. 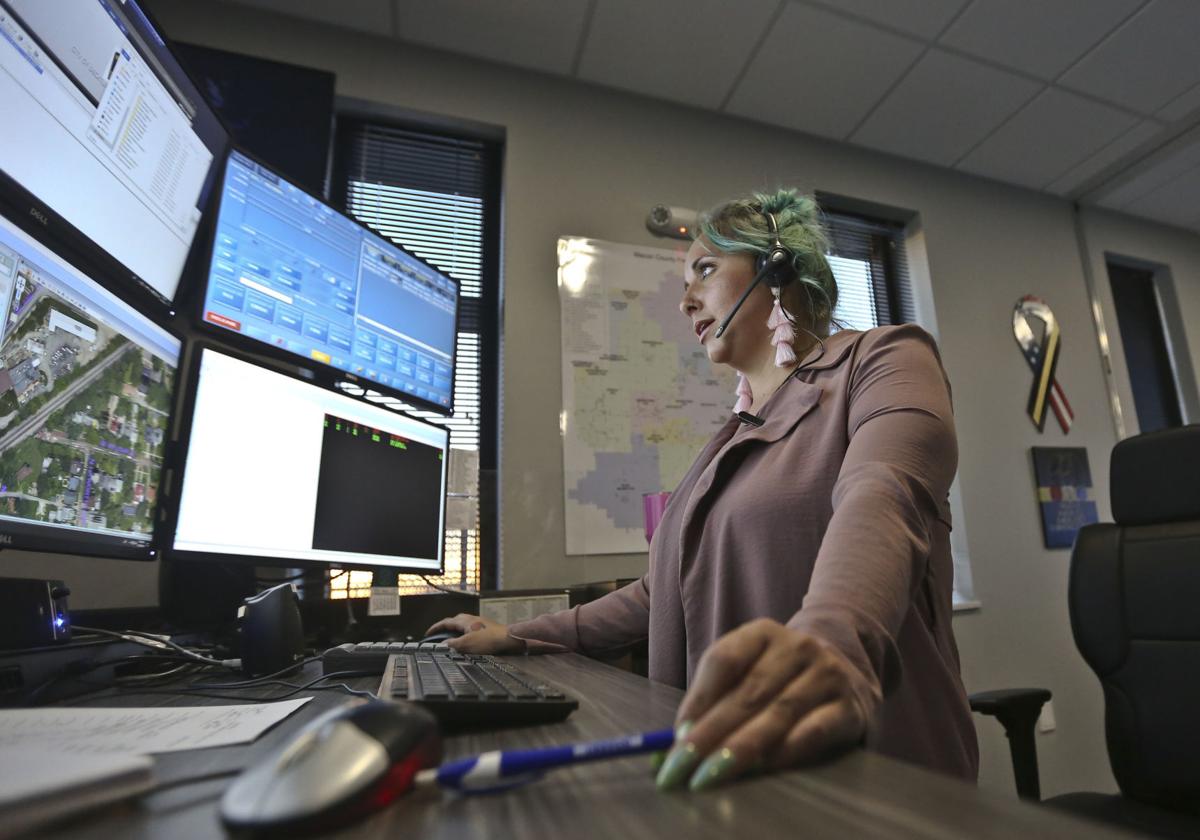 Emergency communications specialist Alex Kralman answers calls on Wednesday at the Central Illinois Regional Dispatch Center. She is one of 25 dispatchers working in the facility. Another four are in training. 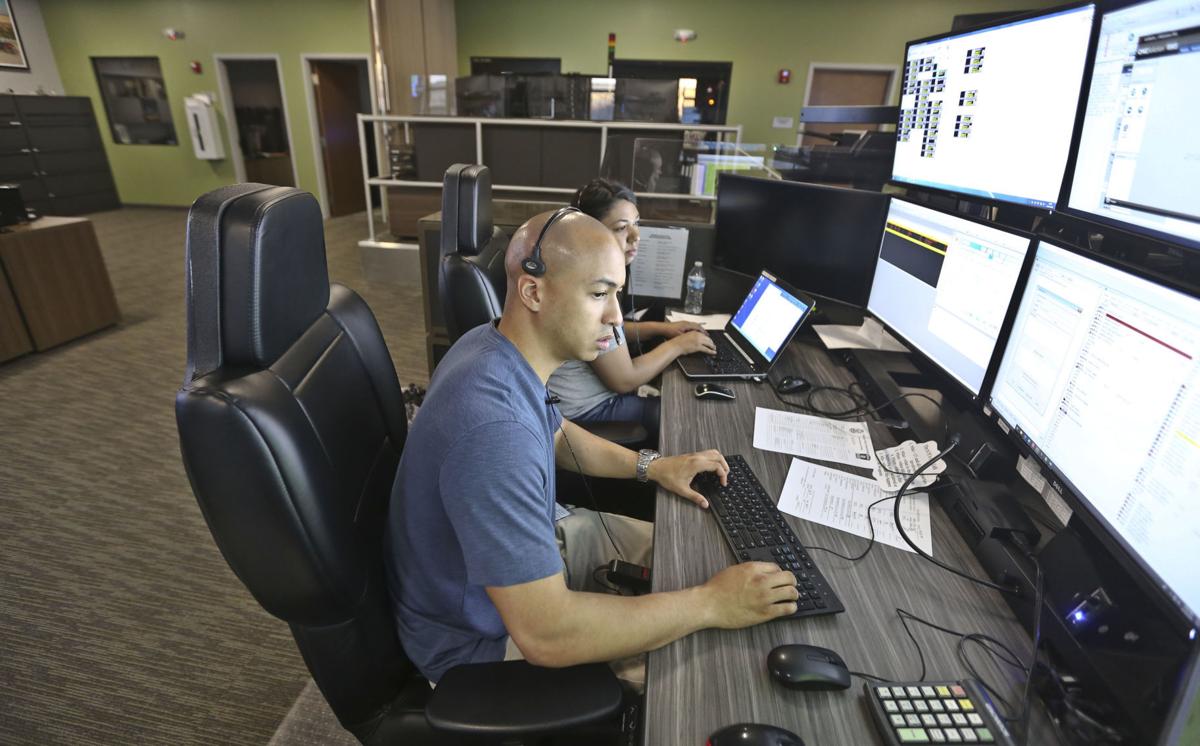 Trainee Xxaviar Warren works with Dianthe Cobb to answer calls. Training to become a dispatcher can take up to a year and includes instruction to help callers through medical emergencies. 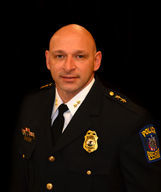