PERU — In response to a letter sent this month by state Rep. Kambium Buckner, Peru Police Chief Robert Pyszka said that investigators with the multi-jurisdictional unit gave all files in the case of Jelani Day's death to the FBI.

The Day family is continuing to ask for the FBI to take over as lead investigator in the case. Pyszka said the FBI has told the unit they will assist them in all matters, but they will not take charge of the case.

Buckner's letter requested that specialized resources, skills and attention are needed in the investigation and Pyszka's department should allow Illinois State Police to provide that.

Pyszka in a statement said he understands the pressure Buckner is fielding. However, the chief said he disagreed with statements Buckner wrote in his letter, including "unsettling discrepancies and inconsistencies including the analysis of surveillance video and the securing of the crime scene among other issues."

He also told The Pantagraph on Friday that investigators are still reviewing surveillance videos in the case.

'The implications are not true,' Jelani Day's family says after autopsy release

Pyszka said the state representative has not reached out to him to discuss his concerns of inconsistencies and discrepancies in the investigation.

The chief also said the unit has contacted the FBI several times, with the most recent being early last week. Additionally, he said an independent autopsy report conducted by the Day family has not been yet been furnished to the unit.

"As far as the other claims concerning the investigation, I cannot comment as it is an ongoing investigation," Pyszka stated in the statement.

Results of the investigation's autopsy report were announced Monday by the LaSalle County Coroner's Office, indicating Day's cause of death was drowning. The report, received by The Pantagraph by a Freedom of Information Act request, stated forensic pathologists found no evidence of assault or altercation, or sharp, blunt or gunshot injury on Day's body, which became severely decomposed in the Illinois River.

Forensic Pathologist Scott Denton said it's unknown how Day went into the water.

Day's aunt, Terri Davis, told The Pantagraph Wednesday that the investigation's autopsy results have not changed her family's assertions that Day's life was taken by someone without his permission.

A march calling for Justice for Jelani Day was held Tuesday in Peru. The late student's mother, Carmen Bolden Day, led troops of supporters to where her son's car, clothing and body were found, also noting the distance between all three.

She said Tuesday that "none of this stuff adds up."

The Rev. Jesse Jackson has also drawn parallels to the Emmett Till case, where a Chicago teen was killed in 1955 in Mississippi.

Photos: Students join the Rev. Jesse Jackson as they march for Jelani Day in Peru

Jelani "J.J." Day, 25, was last seen on Aug. 24 entering the Beyond/Hello dispensary in Bloomington. Authorities on Sept. 23 said his body was… 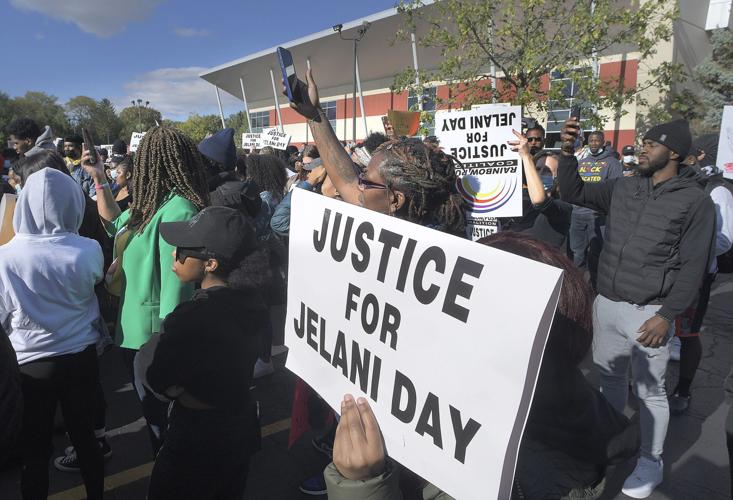 A crowd gathers Tuesday near the Peru site where Jelani Day's car was found. The death is under investigation.