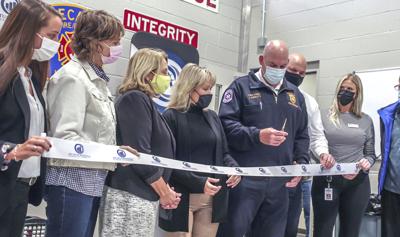 DECATUR — The new fire house near Fairview Plaza is a big improvement from the cramped and quaint 1920s-era building that housed Fire Station No. 3 for decades in Decatur.

On Friday, community leaders officially opened the new station with a Decatur Regional Chamber of Commerce ribbon-cutting ceremony and an open house for the public to learn more about the construction of the station.

“I have a lot of happy memories of driving by the fire station,” said state Rep. Sue Scherer, D-Decatur, who addressed the crowd before the ribbon was cut. “This is a beautiful facility and I always think it’s weird that we’re here and you’re there. We should all be standing together because this a community effort and Decatur just keeps pounding out one good thing after another.”

The Decatur Fire Department unveiled the new station which followed the closure of an old fire house that was in dire need of an upgrade for some time.

The new station, which is a short distance away at 855 N. Fairview Ave., is part of a $12 million plan to build three new stations. The city previously opened the new Fire Station No. 5 along West Mound Road and is taking steps to replace Fire Station No. 7 at Decatur Airport. That new station is slated to be located on Chestnut Avenue just south of U.S. 36, which is south of the railroad tracks and close to areas that have grown in population.

The project also includes the renovation of four existing stations and is funded through the issuance of bonds that will be paid back at the cost of about $400,000 a year over the next 20 years.

With this plan spanning the last six years, Decatur Fire Chief Jeff Abbott said the city hired an architectural firm to make recommendations as to which stations could be brought up to current building codes or needed a new building entirely.

“We wanted something that was affordable, that looked good and was functional. That’s all that we were looking for,” Abbott said. “While $3 million is still a lot of money, I think it was a good investment and I think it should hold up for the next 100 years for the guys working here.”

Having spent more than 18 years of his career at the old station, Deputy Chief Jim Ohl said he was fortunate enough to learn most of what he knows today while working at that station and he cherishes the moments of being cramped in that space with crews but now it’s time to move on.

“It was a good time. You had to get along with the crew that you worked with because there was nowhere to hide in that place,” Ohl said. “Everybody that was there was a worker and just loved going to work and going to fires.”

Ohl said the new station includes a full kitchen and living room that’s almost three times the size of what was at the previous station; separate rooms for crew members to sleep and have their own space in between calls; and other amenities like a gym for training.

"It just allows us to do our job easier,” said Capt. Tom Colbert. “It allows us to have our own space and this is our second home so we take pride in it.”

With the new station being a carbon copy of what was built for Fire Station No. 5, Colbert said a lot organizing has already been done and now it’s time for them to get used to a new routine inside the new space.

“It was important to us that we upgrade our facilities,” said Mayor Julie Moore Wolfe. “Just from the standpoint of that the trucks were big enough, we have really outgrown the facility. It’s cute but it’s not for the needs of firefighters today, this is their home.”

Moore Wolfe said the city is currently taking proposals from people who are interested in the old station at 1308 W. Eldorado St. and they will be considering the potential buyers' financial bid as well as their proposed use of the property.

“I want the citizens of Decatur to take pride in this because this is their fire station. It’s their fire department,” Moore Wolfe said. “We want people to be proud of how we take care of our first responders because those are the people who take of us."

Watch now: What are the upgrades of the new Station 3 in Decatur

Saturday marks the end of playing career for 17 Millikin seniors including six players who came back for a fifth season in 2021.

John Doyle has been appointed to the position of mortgage loan officer at Land of Lincoln Credit Union.

The Lutheran School Association honored veterans on Thursday at a special event.

Friends of the Library hosted their Second Saturday Used Book Sale on Saturday in their new temporary quarters on the second floor of the Decatur Public Library.

City asking prospective buyers to give a price and a short statement expressing what they intend to do with former Fire Station 3.