Become a Member
Read Today's E-edition
Share This
Who is stealing catalytic converters in Central Illinois?
0 comments
Share this

DECATUR — Random but persistent thefts of catalytic converters from vehicle exhaust systems are burning a nasty hole in the pocketbooks of Central Illinois car owners.

Converters sit in line with exhaust mufflers and use complex chemical reactions involving rare metals to help clean up tailpipe emissions. There isn’t much of the rare metals in any one converter, but then again you don’t need much to make them valuable: The price of rhodium, one of the metals involved, is currently around $21,800 an ounce.

Converter thefts have been reported in recent months from the Mount Zion area and various locations in and around Decatur and in Coles County. One of the more high profile thefts saw several vehicles targeted that belong to the Decatur Park District and left a damage bill in the thousands of dollars to fix.

Don Shafer, owner of Danny’s Muffler and Brake Inc. shop in Decatur, did the repair work on the Park District vehicles and told the Herald & Review they are far from the only victims he’s seen.

“You wouldn’t not believe how many I’ve had to fix; they (the thieves) have been hitting a lot of churches, businesses,” said Shafer. “I think it's some group that comes to town, hits vehicles, and they’re gone for a while to let it all die down and then they come back through and do it again.”

Shafer said Illinois law forbids the over-the-counter sale of used converters and he suspects those stealing them have their own shady buyers already lined up, probably in other states.

He said the first car owners know their converters have been stolen is when they start the vehicle up and hear the noise of the now open exhaust pipes. Repairs are not cheap: cost of converters for a Toyota Prius run around $1,000. Others on larger vehicles can run into thousands of dollars; if you’re lucky enough to own a Ferrari F430, for example, the converters for that exotic engine are priced at $7,540.

Shafer said the thieves work fast using battery-powered saws and it doesn’t take an experienced operator long to do. “There is a video on the internet where they guys pull up beside a Prius, jump out, jack the car up and cut the catalytic converter out and are gone in 1 minute, 30 seconds,” he added.

Similar thefts have been reported across the country.

Chief Deputy Tyler Heleine with the Coles County Sheriff's Office said catalytic converter theft "kind of goes in spurts." He said thefts occurred six-eight months ago and then leveled off until recently.

Detective Sgt. David Pickering said the Sheriff's Office has received three reports of recent catalytic converter thefts in the county and is aware of at least one other theft that has not been reported.

"There has been an uptick of thefts but it's not unique to Coles County," Pickering said, adding that they have heard of thefts in Clark and Richland counties.

Pickering said the indications are that most stolen catalytic converters are being taken across state lines.

"We are working with other counties and jurisdictions to develop leads and help each other out," Heleine said. "We bet the perpetrators that are hitting other jurisdictions are probably responsible for ours, as well."

Heleine urged those who have experienced catalytic converter thefts recently or have seen suspicious vehicles near their homes to contact law enforcement.

"They need to report those because it could be part of bigger picture, a bigger investigation," Heleine said. He noted that thefts have occurred in rural areas and in city police jurisdictions in Coles County.

Heleine and Pickering advised drivers to be aware of their surroundings, to park vehicles in their garages or in well lit areas, and to point their home security cameras toward them if available.

"The perpetrators are efficient about it. They can be under a car and have a catalytic converter cut off in a number of seconds," Heleine said.

Frank Hubbard is chief of the Decatur Park District Police and has been doing some research on converter theft since the park district was targeted. He said he is aware of car dealers and similar businesses being hit and said it’s hard to stop a random crime of opportunity. “And with the crazy values of these things, it's making it very lucrative,” he added.

Mount Zion Police Chief Adam Skundberg said his village was hit several months ago with converter thefts that targeted businesses and an apartment complex. And he agrees that, short of keeping your vehicle in a locked garage, it’s tough to guard against randomly targeted thefts like these.

“Park close to your house, park in well-lit areas,” he said. “This type of theft does make some noise and the thieves will prefer areas where they don’t have to worry about waking anybody up.”

Decatur police Detective Sgt. Chris Copeland said the best deterrent against converter theft, or any other kind of theft, is alert citizens taking notice of suspicious activity and calling the cops to check it out.

“People really don't pay attention to noises they hear and things like that,” he explained. “I’ve done neighborhood canvasses (after crimes) where somebody has watched a burglary taking place and didn’t think to call us.”

He lumped converter thefts in with other crimes of opportunity, like stripping copper pipes out of vacant houses, which rise and fall with the value of scrap. Copeland said the police would rather check out a false alarm than miss the opportunity to catch a thief because no one bothers to report what they see or hear.

And, in the meantime, the thefts go on. The National Insurance Crime Bureau, an insurance-industry funded analysis unit headquartered in Illinois, said catalytic converter thefts were occurring at an average rate of 1,203 a month in 2020 alone.

9 films set or filmed in Illinois (but not Chicago)

Police said a Decatur burglar chose precisely the wrong moment to exit a home carrying two stereo speakers he had just stolen: he emerged from the front door just as two uniformed officers were walking up ready to knock.

Defendant escapes prison thanks to changed sentencing laws, big restitution payment and agreement of her ex-boss.

A Chicago woman who tried to rip off a Decatur dealer with the fraudulent purchase of a $13,000 three-wheeled motorcycle was in for a surprise when she found police had rode to the dealership to meet her, a sworn affidavit said. 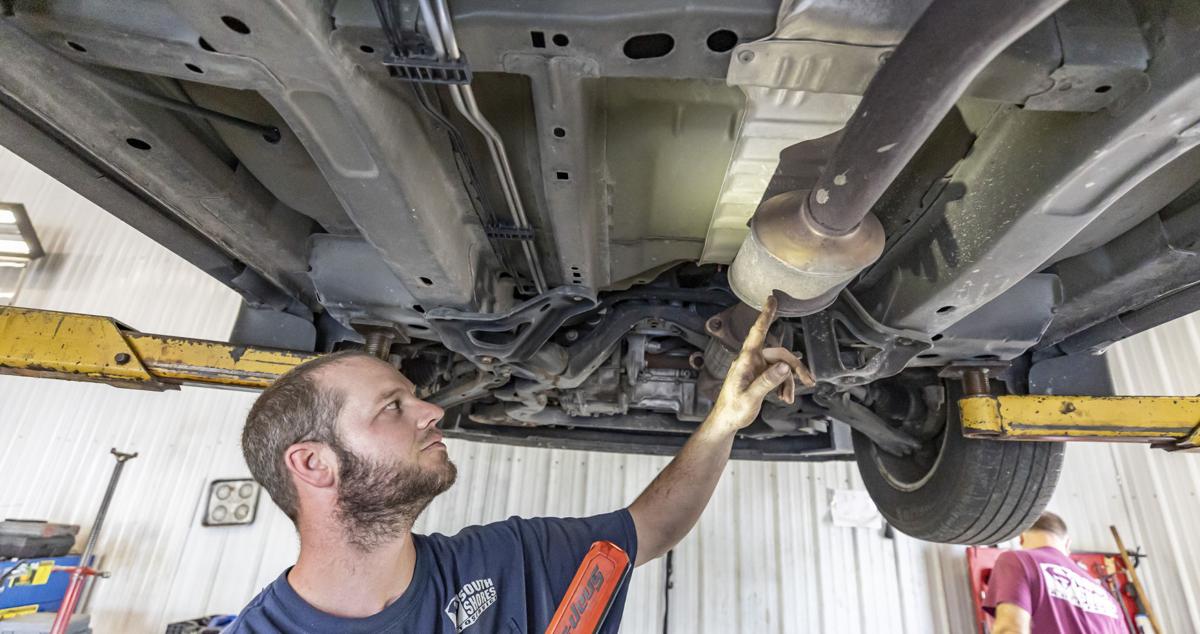 Mechanic Ben Williams points to a catalytic converter Wednesday at South Shores Auto Service. Theft of the emission-control devices is on the rise, police say. 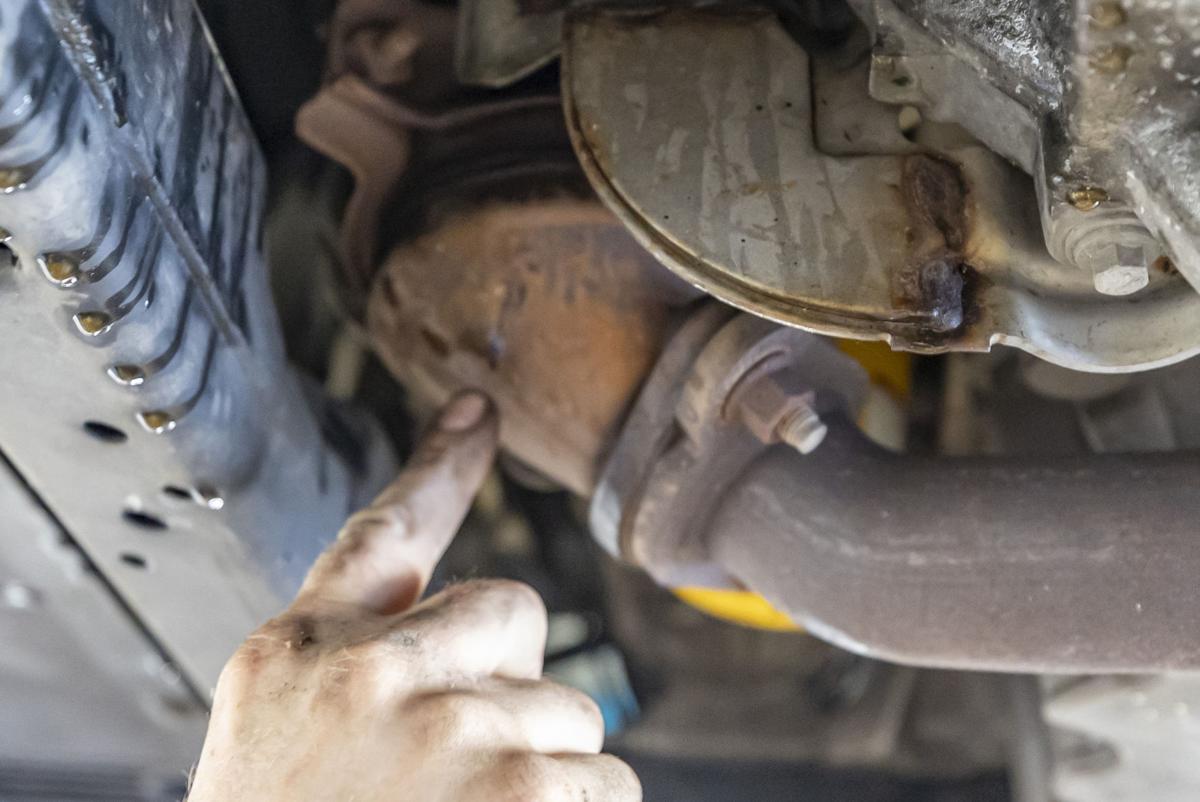 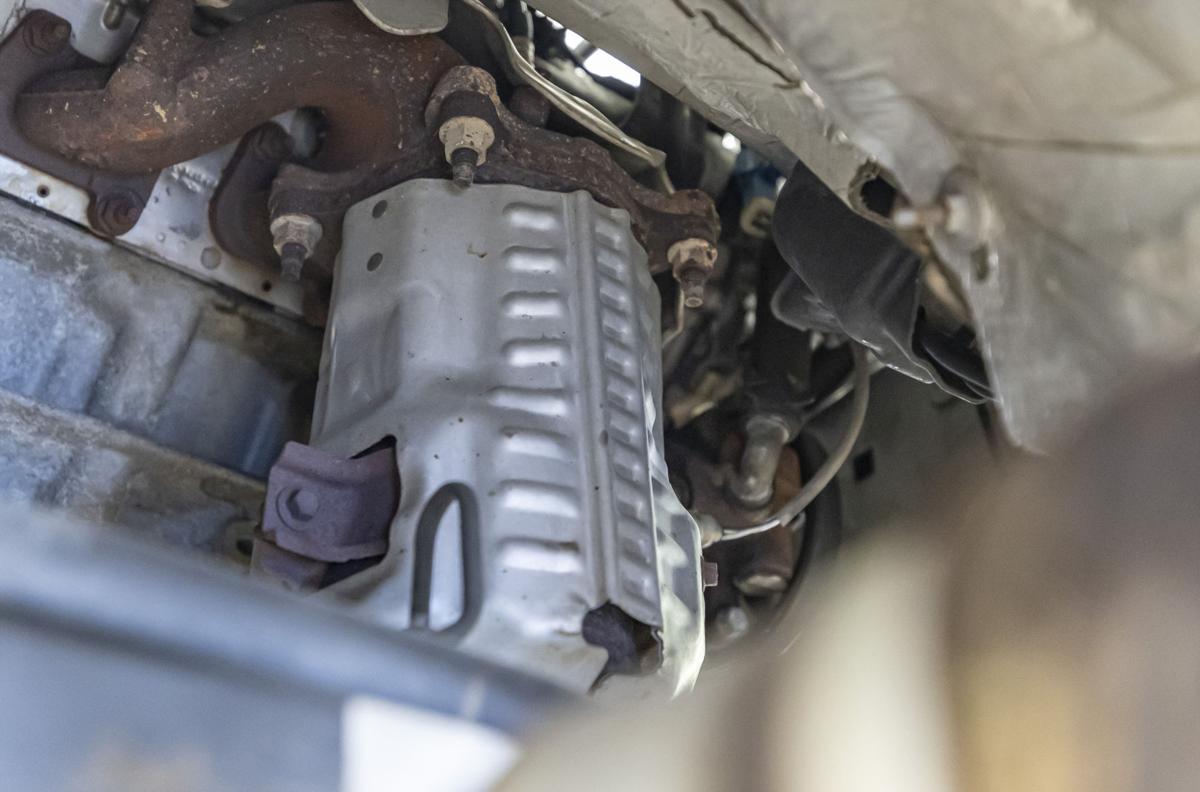 Mechanic Ben Williams points to a catalytic converter on a car that is on a lift on Wednesday at South Shores Auto Service.