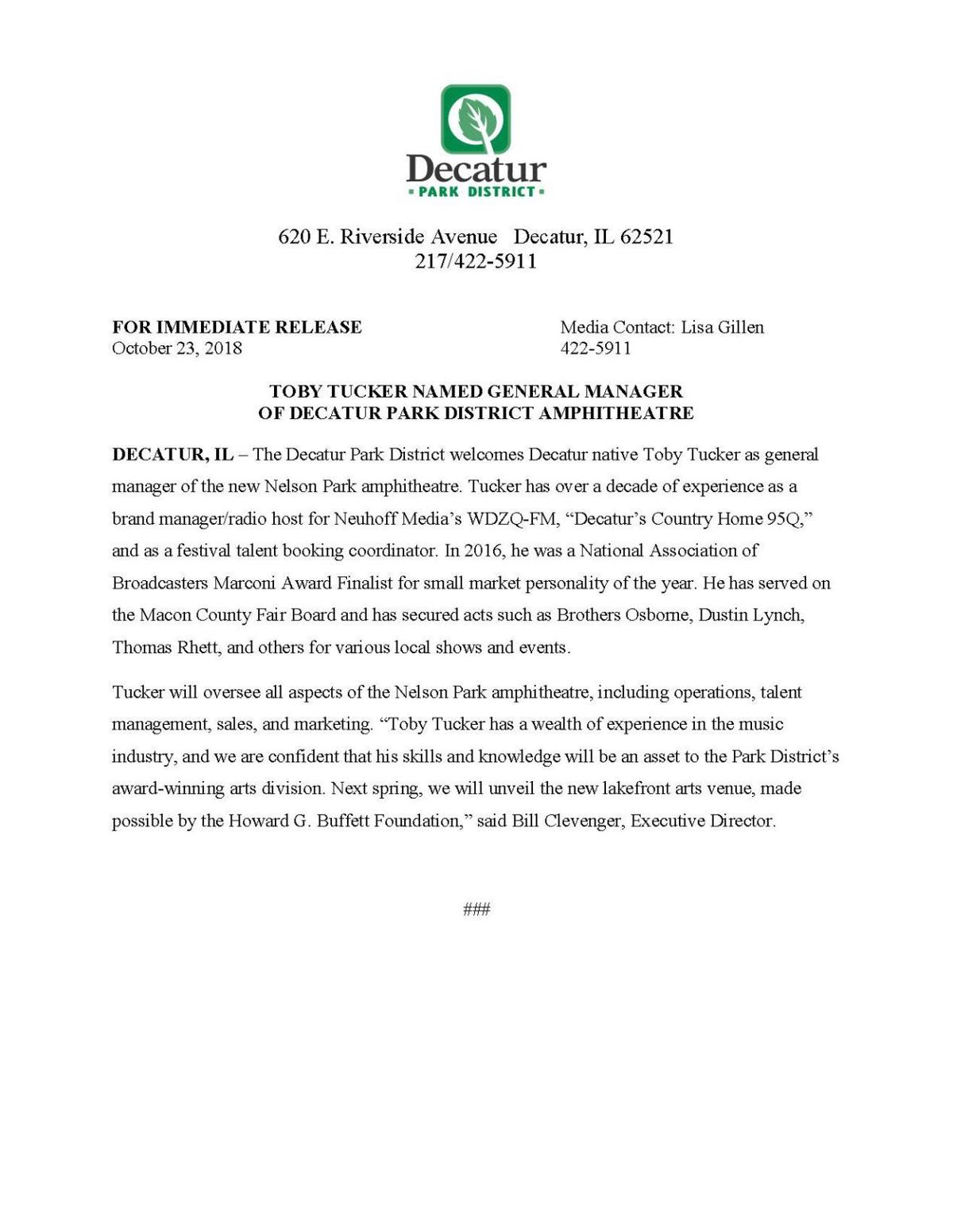 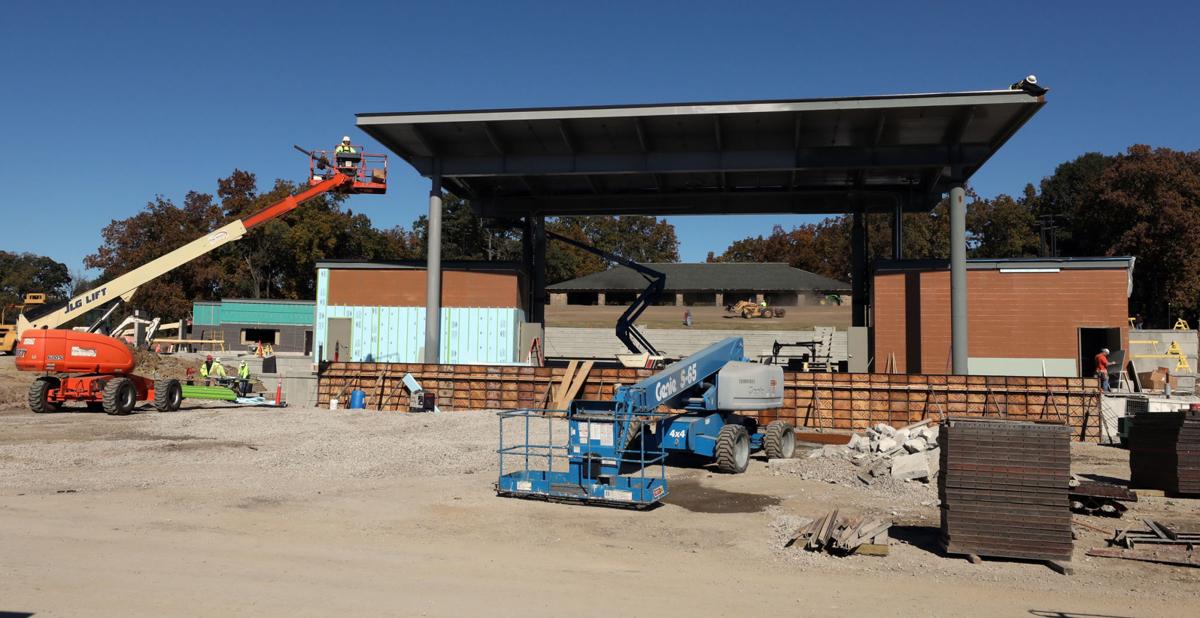 Workers make progress on the Nelson Park amphitheater Tuesday. Toby Tucker will be the general manager for the venue. 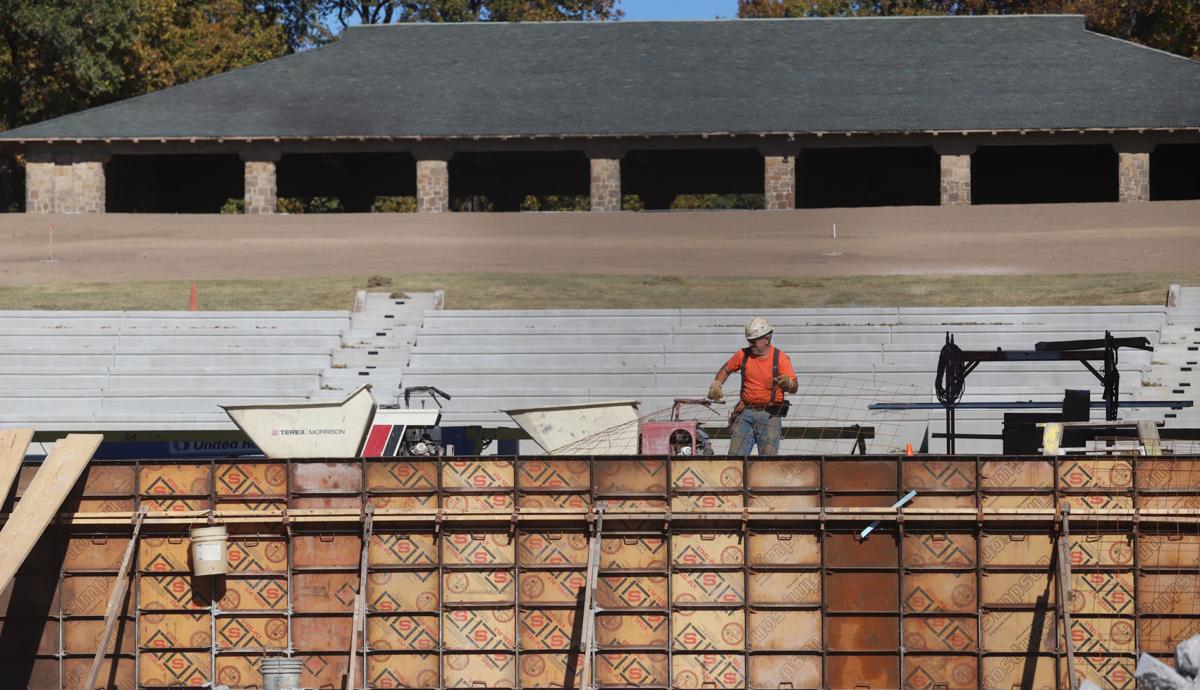 Work is performed around the stage area at the new Nelson Park amphitheater Tuesday. 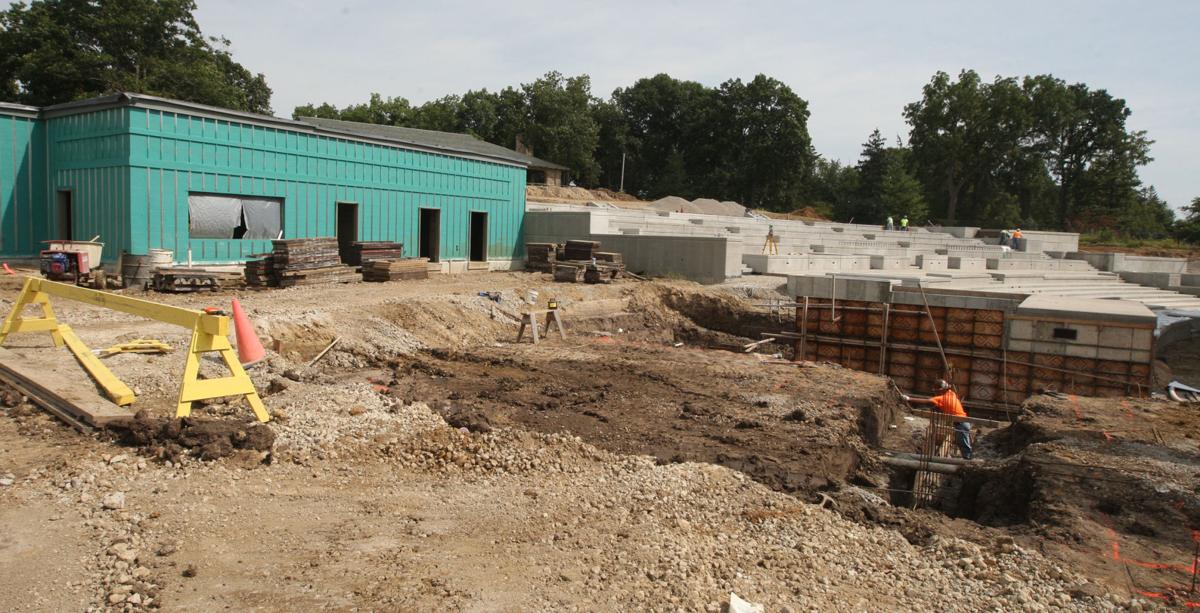 The Nelson Park Amphitheater construction site is shown Aug. 31, 2018. The facility is set to open next spring and will have 95Q's Toby Tucker as general manager, the park district said.

DECATUR — While the man hired to book acts for the new Nelson Park amphitheater is known for his work with country music, he ensures that the venue will provide entertainment for people of all ages and tastes.

The Decatur Park District on Tuesday announced that Toby Tucker, program director and radio host for Decatur’s Country Home 95Q, will be the general manager the multi-million dollar amphitheater. His first day on the job will be Monday, Oct. 29.

"I'm very excited," Tucker said Tuesday afternoon. His role as the amphitheater's manager is full-time, but he said he'll still help out at 95Q on a part-time basis until the end of the year.

Tucker will oversee operations, talent management, sales and marketing for the amphitheater, which is set to begin hosting acts next year. Tucker has more than a decade of experience as a host and brand manager for the Decatur country station, Neuhoff Media’s WDZQ-FM, and as a festival talent booking coordinator, the park district said in a statement.

“Toby Tucker has a wealth of experience in the music industry, and we are confident that his skills and knowledge will be an asset to the park district’s award-winning arts division,” Executive Director Bill Clevenger said in a statement.

Construction is ongoing at the amphitheater's site on the lakefront near Nelson Park's Pavilion No. 1. Clevenger has previously told the Herald & Review that the venue will be ready by next spring.

In 2016, Tucker was a finalist for the Marconi Award for small market personality of the year from the National Association of Broadcasters. He has served on the Macon County Fair Board and secured acts such as Brothers Osborne, Dustin Lynch, Thomas Rhett and others for various shows and events.

Tucker's role as the amphitheater manager won't be the first time that he's worked with the park district. For years, he has helped line up acts for the "Shake the Lake" concert series co-sponsored by the district and Neuhoff.

While he's become known for his association with country music, Tucker promised that the amphitheater's slate of performances will be diverse.

He said he's a "fan of many genres" and said he wanted to explore securing acts known for various genres — including Christian, R&B, classic rock and blues, among others.

"I want to provide the community an opportunity for people to get in touch with me and provide feedback," Tucker said. "I want to have an open door. If people want to talk business, let's talk business."

Tucker said that there's still a lot of ground work that needs to be laid in the months before the ampitheater is scheduled to open, but he's excited about the opportunities that the completed venue will provide for the city.

"This will be something that many of the towns around us don't have," he said. "Those people will hopefully come here to check out (the amphitheater's) events."

The amphitheater is a key part of the park district’s long-term plan to transform the Decatur lakefront into a hub of recreational and cultural activities. Construction began on the project late last year.

The work is primarily funded by a $3.9 million grant from the private foundation of Macon County Sheriff Howard Buffett, who announced the donation two years ago after previously promised state grant funding fell through.

Through its capital projects budget, the park district has funded about $1.2 million of additional work.

What kind of acts would you like to see perform at the Nelson Park amphitheater? Visit herald-review.com and share your thoughts.

Learn more about Toby Tucker, who is the subject of Sunday's Five Questions feature.

When will the Nelson Park amphitheater open? Here's everything you need to know about the Decatur Park District's big construction projects.

DECATUR — As summer comes to a close, the Decatur Park District plans to keep the momentum behind several major construction projects going st…

When will the Nelson Park amphitheater open? Here's everything you need to know about the Decatur Park District's big construction projects. (copy)

DECATUR — As summer comes to a close, the Decatur Park District plans to keep the momentum behind several major construction projects going st…

DECATUR — The Decatur Park District announced it will close the gas dock and "Snack Shack" building on the Nelson Park shoreline, with officia…

DECATUR — As progress continues at the site of Nelson Park's $4.25 million amphitheater, the Decatur Park District worked to beautify its surr…

The Gargoyles are coming to Decatur

DECATUR — Although Halloween has passed, Gargoyles will be coming to Decatur.

How do Scovill Zoo animals weather the winter? Care center provides refuge behind the scenes

DECATUR — Scovill Zoo might seem serene from the outside this time of year, but the staff is hardly hibernating behind the scenes. Instead, th…

What's on the schedule? Decatur Park District gets update on facility improvements

The Herald & Review is counting down the top stories of 2018. Share your thoughts here.

Workers make progress on the Nelson Park amphitheater Tuesday. Toby Tucker will be the general manager for the venue.

Work is performed around the stage area at the new Nelson Park amphitheater Tuesday.

The Nelson Park Amphitheater construction site is shown Aug. 31, 2018. The facility is set to open next spring and will have 95Q's Toby Tucker as general manager, the park district said. 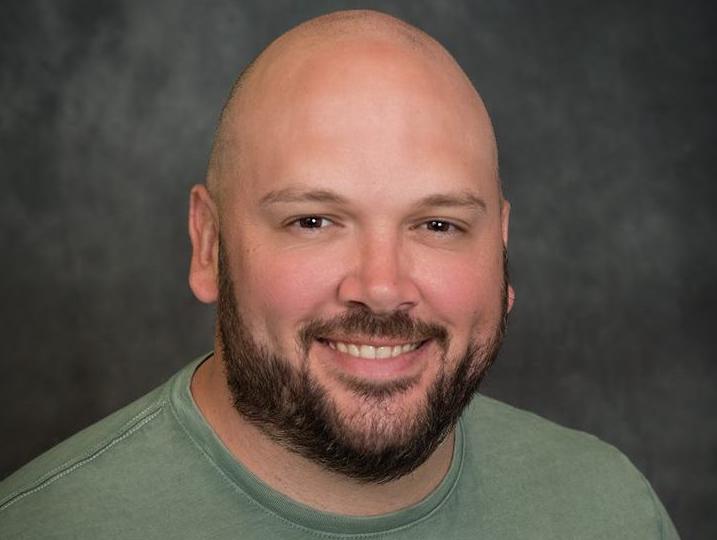