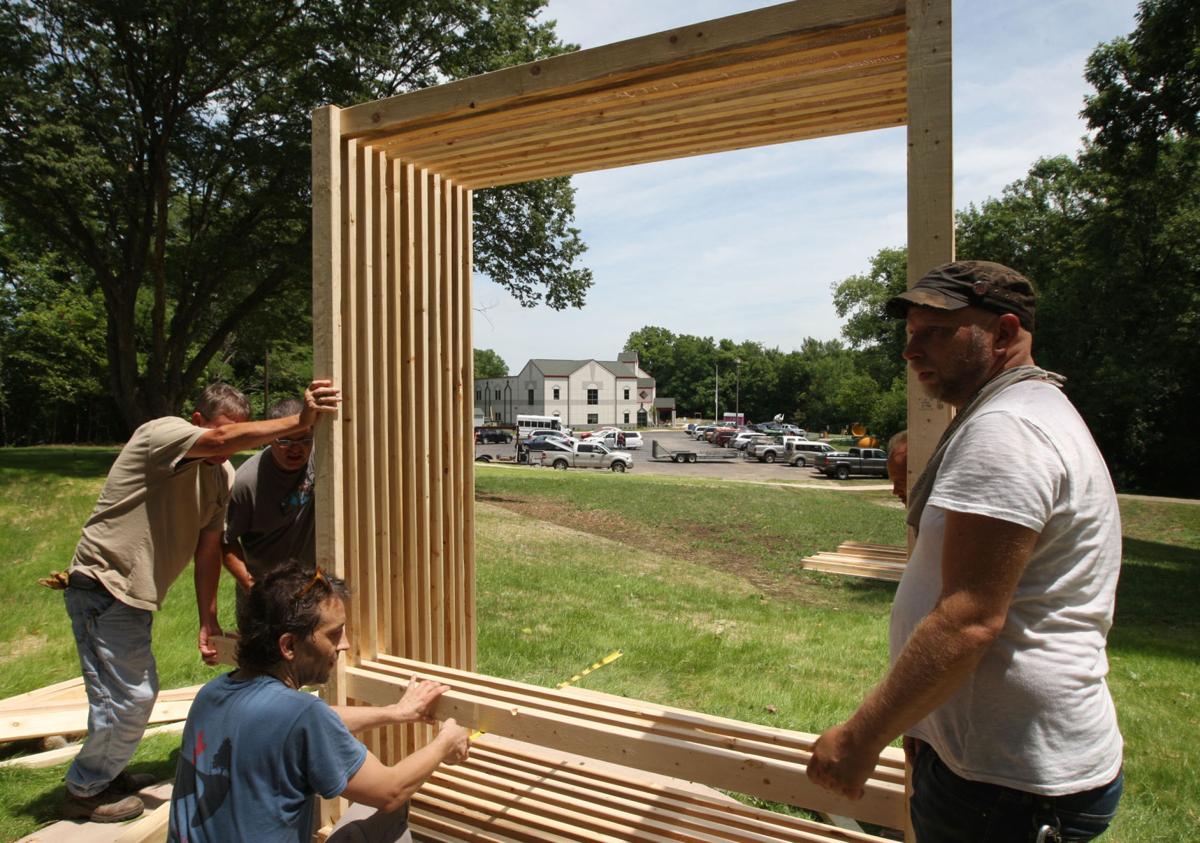 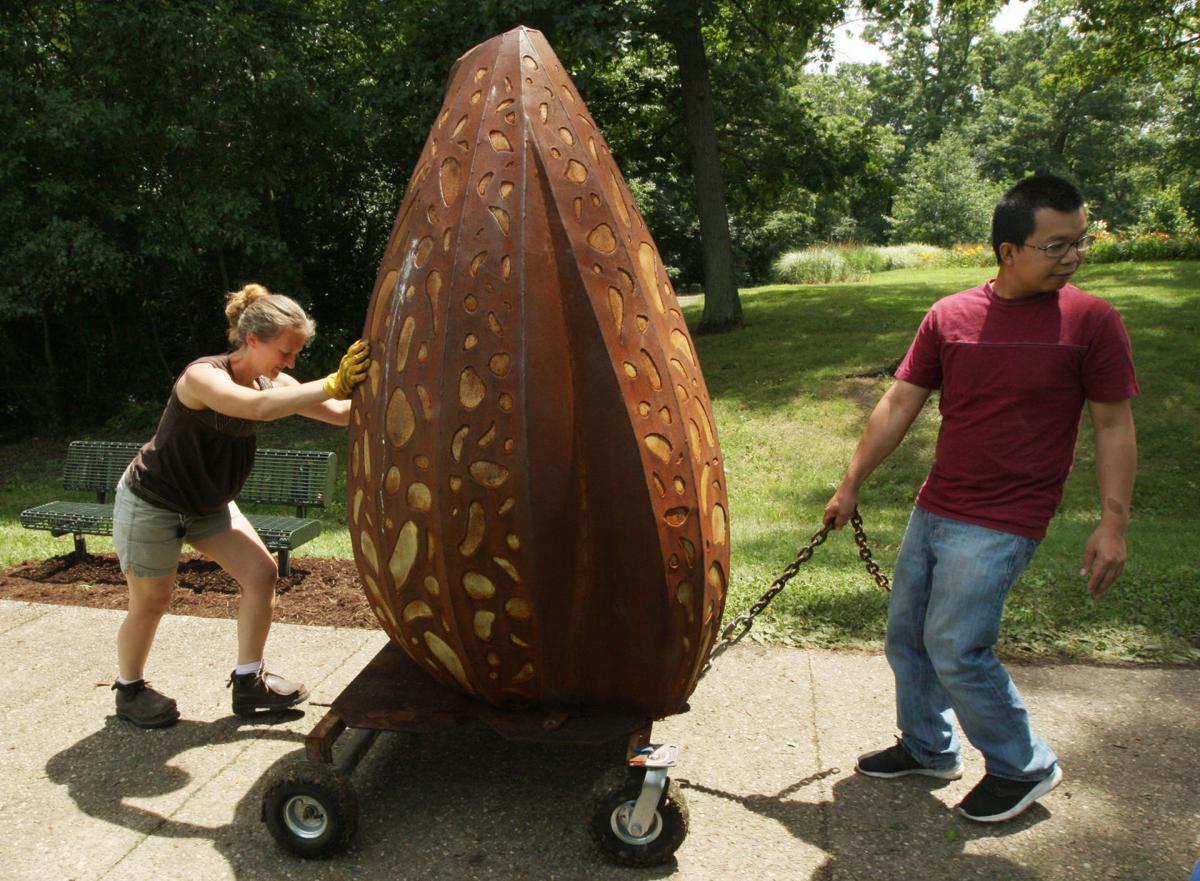 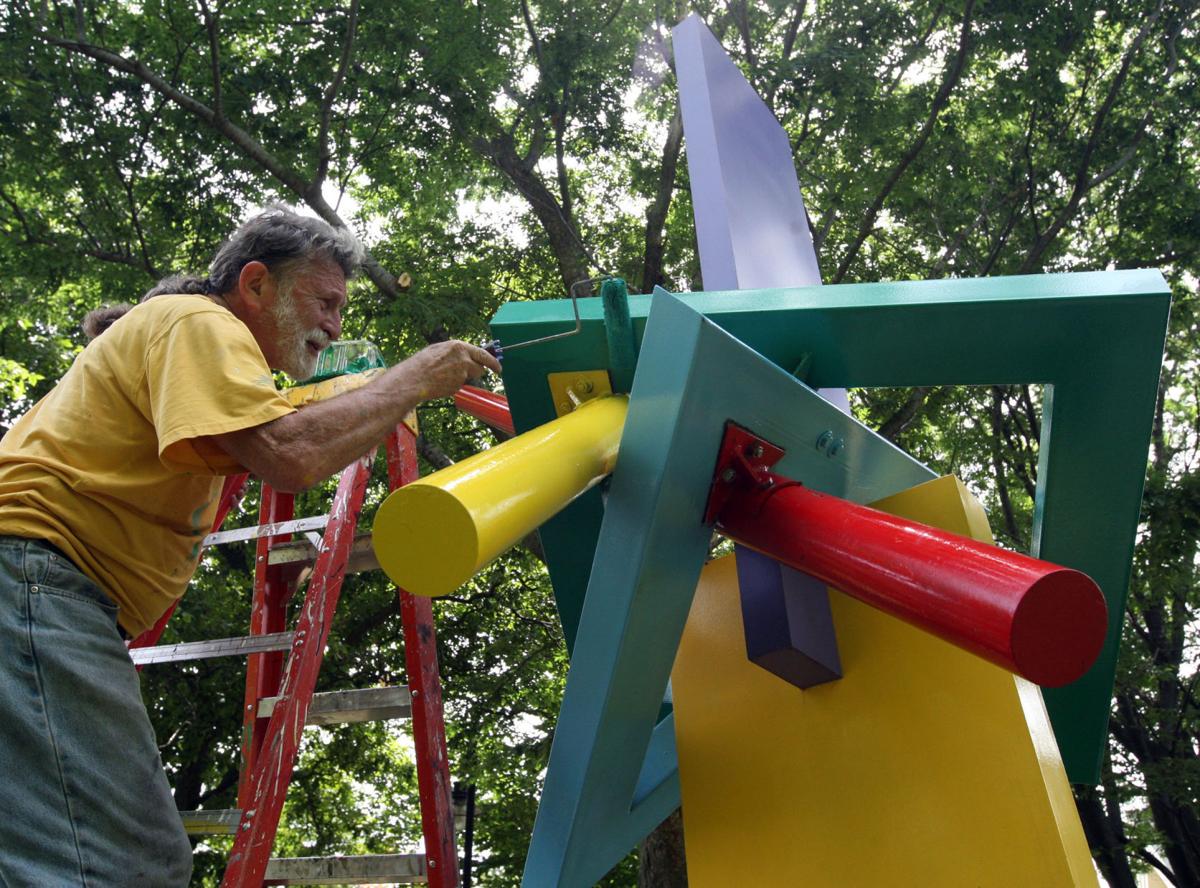 Artist Ray Katz of Pontiac, Mich., paints his sculpture 'Red Green Construction' in preparation for the opening of the Scovill Sculpture Park. 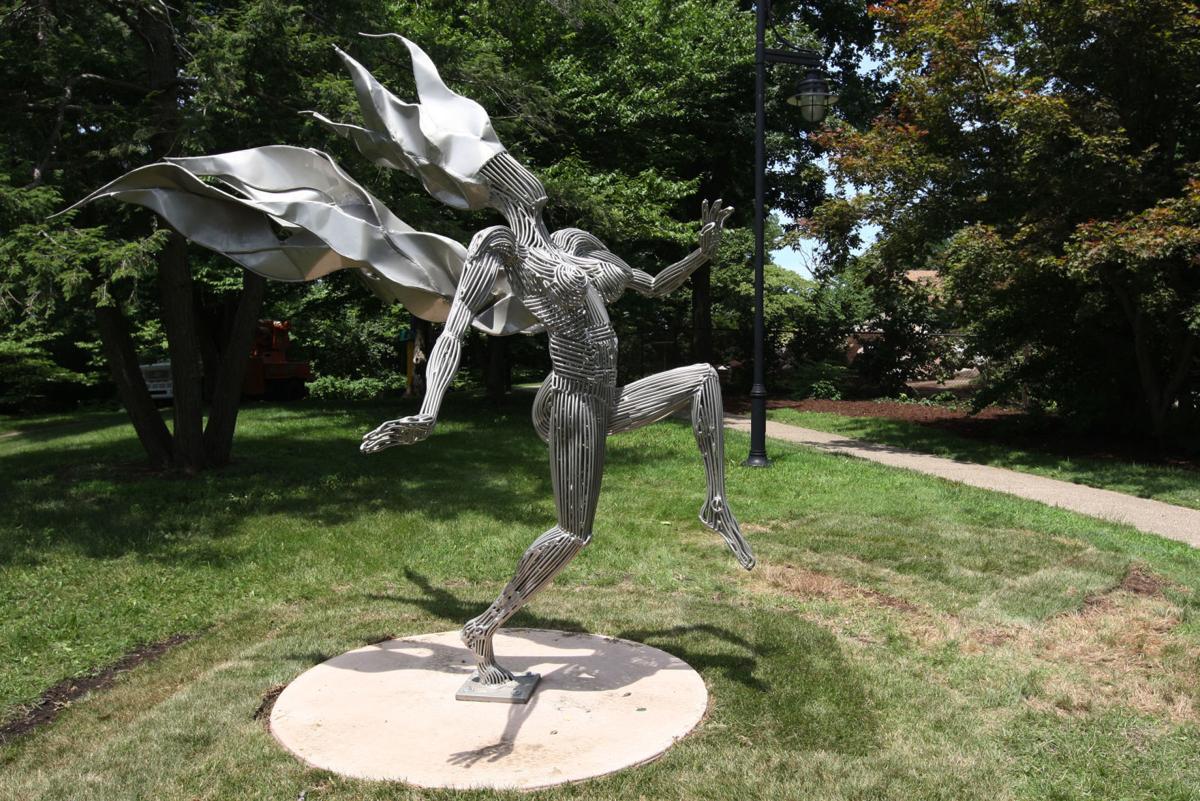 Jack Howard-Potter’s sculpture, 'Valkyrie,' was among the first to be installed in the park.

But the one sitting in front of the Children's Museum of Illinois isn't so frightening. At least, that's what artist Doug Gruizenga was thinking about as he created the large aluminum sculpture.

“It seems as though the dragons are probably just as scared of us as we are of them, or they wouldn't be acting so weird and scary. Fear drives anger. What's the solution to that?” said Gruizenga, 69, who has a background in social work.

“Well, if you get to know somebody or something and you gain knowledge of them, you're generally not afraid anymore. You kind of become friends,” he said.

Thus, the sculpture is titled “Please Sit Down, Read Me a Story.” It is one of 11 pieces of art that will soon fill the area between Scovill Zoo and the Children's Museum of Illinois.

The Decatur Parks Foundation is overseeing the project with a $250,000 grant from the Howard G. Buffett Foundation and cooperation with the children's museum, Decatur Park District, Decatur Area Arts Council and Neuhoff Media.

Installation began Thursday and will continue today. Most of the artists are bringing their pieces and arranging them, along with help from park district employees across many departments. It has been “all hands on deck” to get the park and adjacent oriental garden ready, said Jill Applebee, executive director of the foundation.

The Scovill Sculpture Park will open for a community walk from 11 a.m. to 1 p.m. Saturday. Most of the artists will be on hand to discuss their work, along with Coffee Connection and Mister Softee. The first 500 attendees will receive a free commemorative blanket.

Applebee said the park was coming along very well Thursday. She has enjoyed meeting the artists and hearing their stories, and hopes the public will, too.

“The passion and the love for their art, it's amazing,” she said. “It's really neat to see.”

There has been one snag, as a piece depicting a butterfly on a flower was damaged beyond repair during its journey to Decatur.

The sculptures will be on display for two years and will be available for purchase from the artists, with 20 percent of the proceeds going to the parks foundation. New pieces will be chosen to replace them in 2018.

Additionally, the committee will select one other piece to display permanently. While that announcement was expected to take place this week, Applebee said it has been pushed back after the roughly 25 submissions didn't quite fit the committee's vision.

“Now, I think we have a better feel for what we want,” she said. “Now that everything else is laid out, it really is making more sense.”

By far the most labor intensive piece is Matthias Neumann's “bench IV (basics),” which is more or less what it sounds like: a large wooden bench. Made mostly of two-by-fours, it will take roughly two days to assemble.

Neumann, 46, of Brooklyn, N.Y., said that's exactly what he hopes people will think when they look at his work.

“I hope it evokes questions,” he said. “I hope people will not just pass by and think, 'Oh, there's another sculpture in the park,'”

And does he hope they'll sit down? He laughed.

DECATUR – For years, the pond in Scovill Gardens sat empty.

DECATUR – A new sculpture park will soon fill the area between Scovill Zoo and the Children's Museum of Illinois, officials announced Wednesday.

Watch Now: Should my kid get the COVID vaccine?

Artist Ray Katz of Pontiac, Mich., paints his sculpture 'Red Green Construction' in preparation for the opening of the Scovill Sculpture Park.

Jack Howard-Potter’s sculpture, 'Valkyrie,' was among the first to be installed in the park.