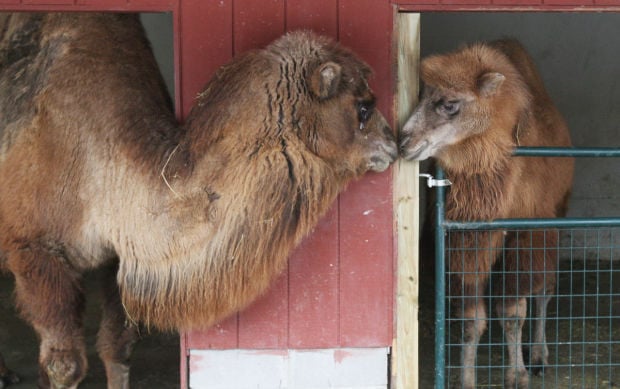 Camel Mona-Sasha, sniffs Jack during a brief visit. Lead keeper Amanda Ott says that the camels don’t have frequent interactions yet, but their rare meetings are positive. 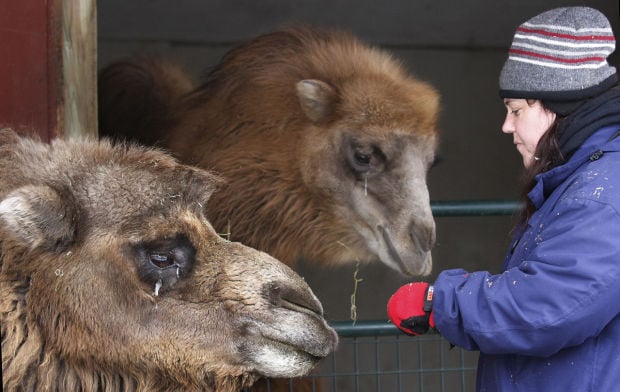 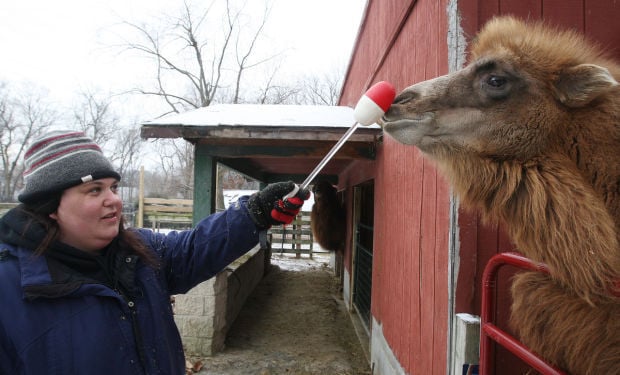 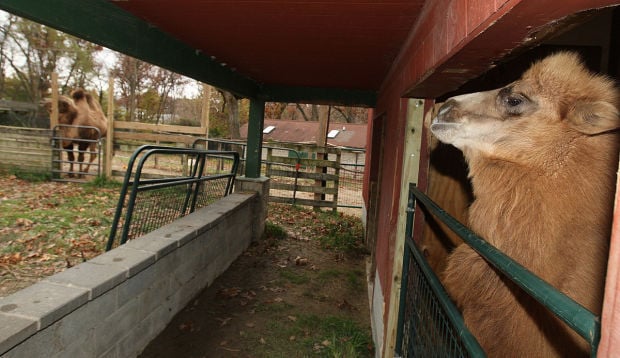 When the Scovill Zoo's newest camel, Jack, right, arrived he was separated from resident camel Mona-Sasha with a barn fence that allows the two to get acclimated to each other through sights and smells.

DECATUR – Anyone who has ever put two strange cats in a room together knows that animal introductions often require skill and patience.

Now, imagine one of the animals weighs 2,000 pounds.

That's what Scovill Zoo keepers face as they work with Jack, a young Bactrian camel who arrived in November, and Mona-Sasha, the longtime female camel resident. After two months near each other, the camels have shown no signs of aggression, but it's still too early to put them together.

A big problem is their size difference. Jack is just shy of a year old, and weighs less than 800 pounds. Mona-Sasha is fully grown at 10 years old and 2,000 pounds. Because she is so much larger, even innocent play could lead to a mishap.

“Just because I think there will be some excitement, for his safety we want to make sure he's a little bit bigger before we put them together,” said keeper Amanda Ott. “We also want the weather to be more cooperative and not any of this (ice and snow) on the ground, because they slip just like we do.”

The two live in the zoo's camel exhibit, which is more than large enough for both of them at roughly an acre in size. In the outside portion, they are separated by fencing. In the barn, a barrier with small openings allows them to sniff each other, but not much else.

The new arrival is likely a welcome one for Mona-Sasha, who lost her roommate in April when 20-year-old Seymour died from a stomach ulcer and arthritis. Grief is different for camels, but it soon became evident that Mona-Sasha realized he wasn't coming back. She grew calmer, almost somber.

“You could just tell that she knew something was different,” Ott said.

Jack, who was born in February and named for Jack Frost, came from the Cincinnati Zoo. Ott and Scovill Zoo assistant director Ken Frye picked him up Nov. 10, watching on a monitor to make sure he did well in the trailer on the five-hour drive back to Decatur.

So far, the young camel has adjusted without incident to his new home. He's still learning all the keepers, who train him to perform tasks such as touching his nose to a target. When he does so successfully, he gets a treat.

Frye said keepers use this method to teach the camels several commands, such as laying down or lifting their legs.

Ott describes Mona-Sasha as sort of a “diva camel,” one who definitely likes companionship and attention. She notices when Jack is getting it instead of her and has responded accordingly.

“She's always been a very opinionated camel, but she's been like, 'Hey, I can do that, too,' and we've been able to actually work with her a little bit better because she does get jealous, and she wants the treats,” Ott said. “She starts doing all the behaviors that she knows to get treats.”

Theirs is among one of the zoo's longest introduction processes, but the extra time is meant to provide greater comfort as well as safety. Just like people, animals don't always have the easiest time moving in with a stranger.

Some animal greetings can take place relatively quickly. Others are more complicated. For example, zebras Chad and Zoe took several weeks to get acclimated.

And then there were red pandas Kaydee and Clay, who had to be temporarily separated after their first meeting ended in a “little spat.” Keepers built a special gate in their exhibit, allowing the curious animals to see and smell each other for weeks before they reunited.

The extended getting-to-know-you period proved successful, as the coupling ultimately resulted in a new red panda, Tusa, who was born in June.

“Any time we do a full introduction, we always have keepers that spend a good portion of the day, if not all the day, watching them, so that if there's anything concerning, we can separate them if we need to,” Ott said. “It is a long process, and it is for the animals' benefit and safety, just to make sure that they are going to get along.”

The zoo opens for the season April 3.

DECATUR – After more than a year at Scovill Zoo, Tusa the red panda will strike out next month for a new home at the Smithsonian's National Zo…

15 of our favorite animal stories

Take a look back at just a few of our favorite stories featuring animals.

Camel Mona-Sasha, sniffs Jack during a brief visit. Lead keeper Amanda Ott says that the camels don’t have frequent interactions yet, but their rare meetings are positive.

When the Scovill Zoo's newest camel, Jack, right, arrived he was separated from resident camel Mona-Sasha with a barn fence that allows the two to get acclimated to each other through sights and smells.