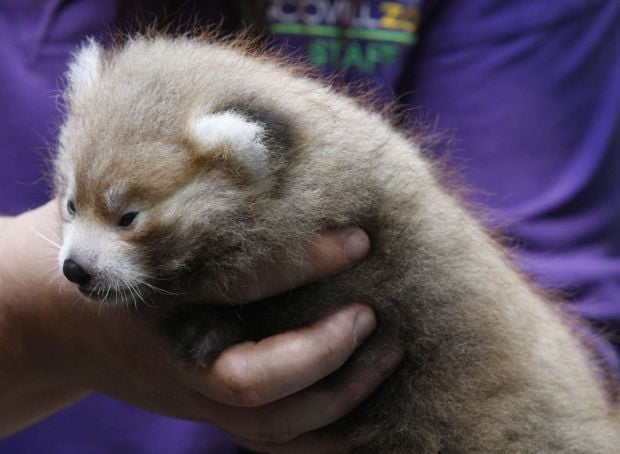 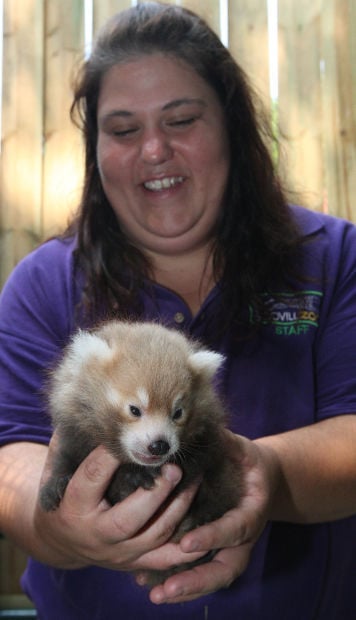 DECATUR — From his high-pitched, piercing cry to his soft, downy fur, Scovill Zoo's newest arrival carries all the hallmarks of a heartbreaker.

Tusa the red panda was born June 27, zoo officials announced Thursday. His name means “baby bamboo shoot” in Nepali, a token of the region to which the species is native.

The first red panda baby born at Scovill Zoo, Tusa is also the first child of Clay, 6, and Kaydee, 2.

Primary keeper Amanda Ott said the youngster, who spends most of his time in a nesting box, has been a source of great joy for zoo staff. “He just makes your heart smile,” she said.

Tusa will stay in or near the nest for several months, during which time zoo guests will not see him. He will begin to appear regularly in late September. At that time, Tusa and his mother will be housed in a separate exhibit being built near the current red panda exhibit, where Clay will continue to live.

When she's not spending time with her cub in the air-conditioned den, Kaydee can still access the red panda exhibit. However, she is separated from Clay by a mesh screen. Perhaps because of the stresses of pregnancy, she began to appear rather grouchy toward her mate near the last month of the roughly 134-day gestation period.

“Like, he would just walk by and she'd hit him,” Ott said. “... He just made a face and then turned around and walked away.”

Once Tusa grows older, keepers may attempt to reunite the family in one exhibit. However, it is likely he will move to a different zoo in adulthood.

As often happens in life, some darkness accompanied the joyous occasion. A female born with Tusa, unofficially named June, survived only 12 days.

Kaydee initially did not place the female cub in the nesting box, a sign that the mother sensed that the cub might have health issues. However, once keepers moved the cub to the nest, Kaydee cared for both as best she could, Ott said.

The female was unable to nurse, so keepers fed her by hand every two hours. In the end, it wasn't enough.

Despite the tragedy, Kaydee has been an “excellent mom” and made her primary keeper very proud. Ott said the mother red panda spends most of her time in the nesting box with baby Tusa and rarely moves him. While she allows keepers to weigh the cub, she always inspects and cleans him after he has been handled by humans.

Because Scovill Zoo is accredited through the Association of Zoos and Aquariums, the red pandas are part of a Species Survival Plan program. It aims to make sure that there is strong genetic diversity among the animals in zoos and that there is enough space for all the red pandas that are born.

Sarah Glass is the coordinator for the red panda Species Survival Plan, as well as the curator for red pandas, program animals and special exhibits at Knoxville Zoo. If a red panda is born in North America, she probably knows about it.

In fact, there's a good chance that keepers might call her for help. Glass jokingly describes her cellphone as the “red panda hotline.”

There are about 270 red pandas in North American zoos, Glass said. Last year, more than 60 were recommended to breed, with about 45 of the cubs surviving.

The infant mortality rate is particularly high among first-time mothers.

“A lot of carnivore moms are not great moms right off the bat,” she said. “These guys don't have a social structure like chimps and gorillas to learn from. The only mom they'll ever learn from is their mom, and they're a baby when that happens.”

A similar number of red panda pairs were authorized to mate this year, but Glass said the recommended breeding will likely be lessened in future years.

“Lots of people want to be involved in red pandas, and we've got good genetic diversity to back that up,” Glass said. “But at some point, we will probably have to curtail that because ... even if every zoo in Canada and the U.S. has red pandas, it's a finite number of spaces available for them.”

The average lifespan of a red panda is 12, but they can live to be older. Firecracker, a resident of the Lee Richardson Zoo in Garden City, Kan., recently turned 23.

They're awfully cute when they're little, though. Glass compared the youngsters to puppies, saying Scovill Zoo visitors will get quite a treat in late September when Tusa appears on exhibit regularly.

And the keepers at Scovill Zoo, whom Glass described as excellent and responsive, are also deserving of the excitement.

“They have obviously invested a lot of time and heart into their panda program,” she said. “I'm just so happy they've got a baby. It warms my heart when it works out for people. I know they're over the moon about it."

DECATUR – After more than a year at Scovill Zoo, Tusa the red panda will strike out next month for a new home at the Smithsonian's National Zo…

DECATUR – What does Tilly the wolf want for Christmas?

15 of our favorite animal stories

Take a look back at just a few of our favorite stories featuring animals.