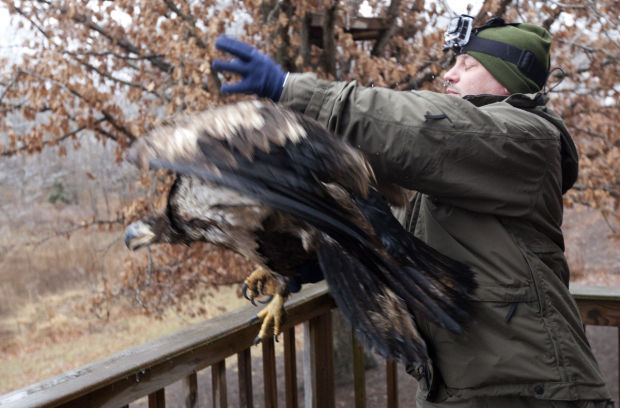 Jacques Nuzzo, program director of the Illinois Raptor Center, releases a juvenile bald eagle back into the wild Saturday in Decatur. 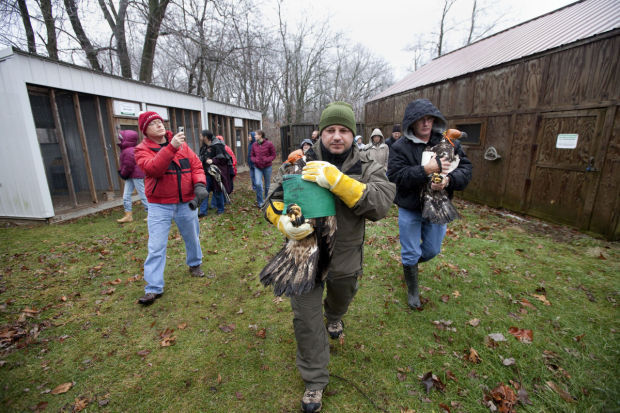 DECATUR — After spending almost a full year living in an enclosure, growing stronger and replacing damaged feathers, the opportunity to soar freely back into the wild is a rather overwhelming opportunity for a fully grown bald eagle.

Presumably this is what the young eagle released Saturday afternoon from Decatur’s Illinois Raptor Center was thinking as it circled twice and then set down in the brush, only a few yards from its place of release.

Its compatriot, on the other hand, reacted much more closely to what was expected, taking to the sky and flying out of sight in the direction of the nearby Sangamon River. After gently shooing the first eagle away toward the overgrowth of forest, program director Jacques Nuzzo said the two-eagle release had been an overall success.

“Sometimes we will take these guys further away to release, but I started thinking why drive them to exotic eagle release locations along the Mississippi River when we’ve got bald eagles living right here in our own backyard?” he reasoned. “We get calls all the time from people in Decatur who have seen eagles sitting by the wharf or on the dam itself. Hopefully they will stick around and find some other eagles in the area. I’m confident they’ll do well.”

The first bird released had been at the raptor center an unusually long period of time because of the condition in which he was originally found. Both eagles were starving juveniles when they were recovered, but the first also had become “feather trashed,” with key feathers damaged. In some species this would be fairly easily remedied through a process called “imping,” which repairs feathers through the use of previously molted complete feathers. Imping for eagles, however, is prohibited by federal regulations, meaning the bird had to stay at the raptor center until its coat of feathers had adequately regrown. Nuzzo said juvenile eagles have an evolutionary tendency to die in large numbers in the wild as part of maintaining the species’ role as an apex predator found in limited numbers.

“Every species has a limiting factor to keep it in check,” he said. “With eagles, it’s a high mortality rate for juveniles. Most don’t make it to be adults, or even make it out of the nest, and this is natural. But we still want to help as many as we can, because although bald eagles are no longer a federally endangered species, they’re still a state endangered species.”

Every year, the Illinois Raptor Center takes in as many as 300 federally-protected birds, including raptors and songbirds. Nuzzo hopes the eagle releases will continue to raise awareness of the center’s programming, especially as the organization turns its eyes toward a large capital-raising campaign in January. The raptor center intends to triple the amount of hospital caging it has available for individual birds, but its biggest project will be the construction of a 300-foot flight facility that will be usable for future eagle residents. Nuzzo and the volunteers have dubbed this facility “Super Flight,” and it could cost the nonprofit organization upward of $250,000, which will be raised through a combination of donations and grants.

“There are no flight facilities for eagles outside the Chicago area, and I intend for us to have the biggest one in the state,” he said. “We’re looking at 16 feet wide, 16 feet tall and 300 feet long. Then it can be divided into three 100-foot flights or ten 30-foot flights. The large flights are really necessary for the eagles to prepare for release into the wild.”

Assisting Nuzzo in all facets of the birds’ rehabilitation is a crew of around a dozen volunteers. Beth Chan, a certified vet tech from Champaign, made the drive to Decatur in freezing rain Saturday afternoon to witness the eagles’ release into the wild. She has witnessed a handful of such releases in her first year with the organization, and said she expected both birds would do well in their new freedom. They might even be visible to residents of Decatur at some point, if locals remember to keep an eye on the skies.

“I really enjoy just getting to see all the different varieties of birds here and being able to help them on their way to a release back into the wild,” Chan said. “Seeing some of these animals up close is a rare opportunity that not a lot of people get. People living here don’t necessarily realize how much wildlife is around just a few miles away. If you do go out and look for them, there’s a lot out there to see.”

LITCHFIELD — A bald eagle has taken to the skies in central Illinois after months of rehabilitation for injuries she received in a fight.

Jacques Nuzzo, program director of the Illinois Raptor Center, releases a juvenile bald eagle back into the wild Saturday in Decatur.