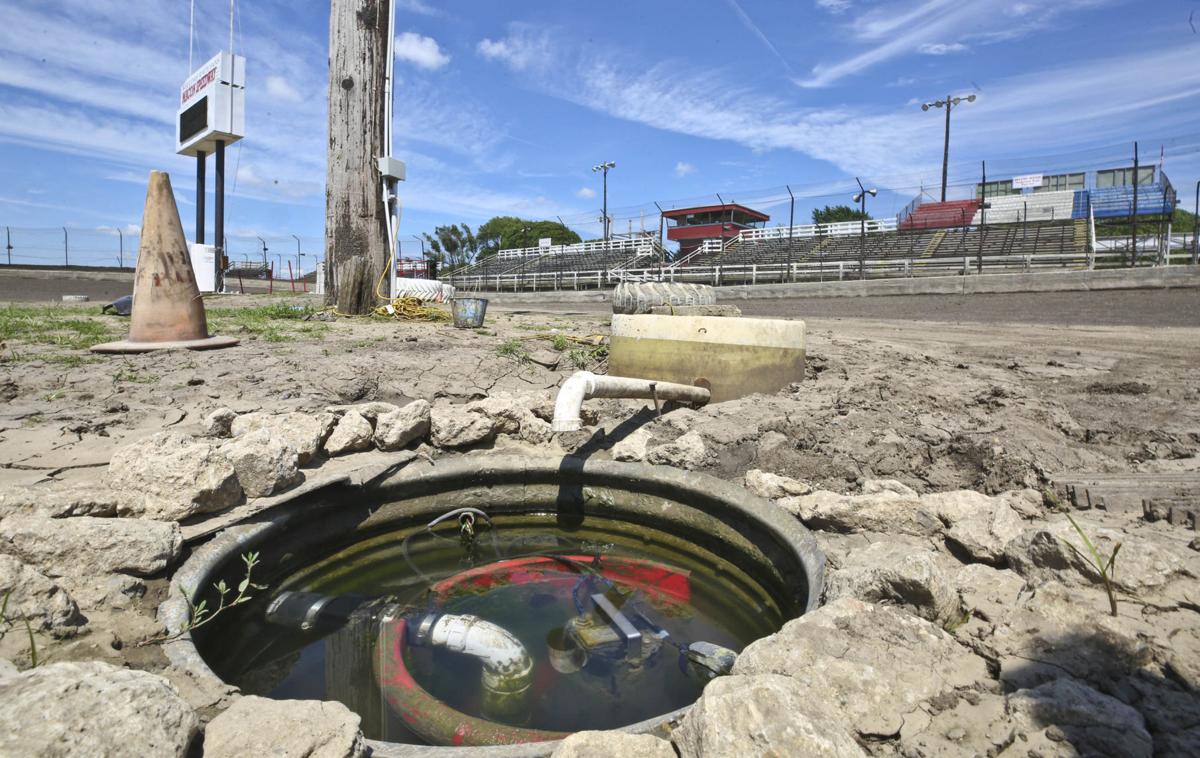 Water fills a pump area at Macon Speedway on Thursday. Round after round of rain have delayed events across the region. 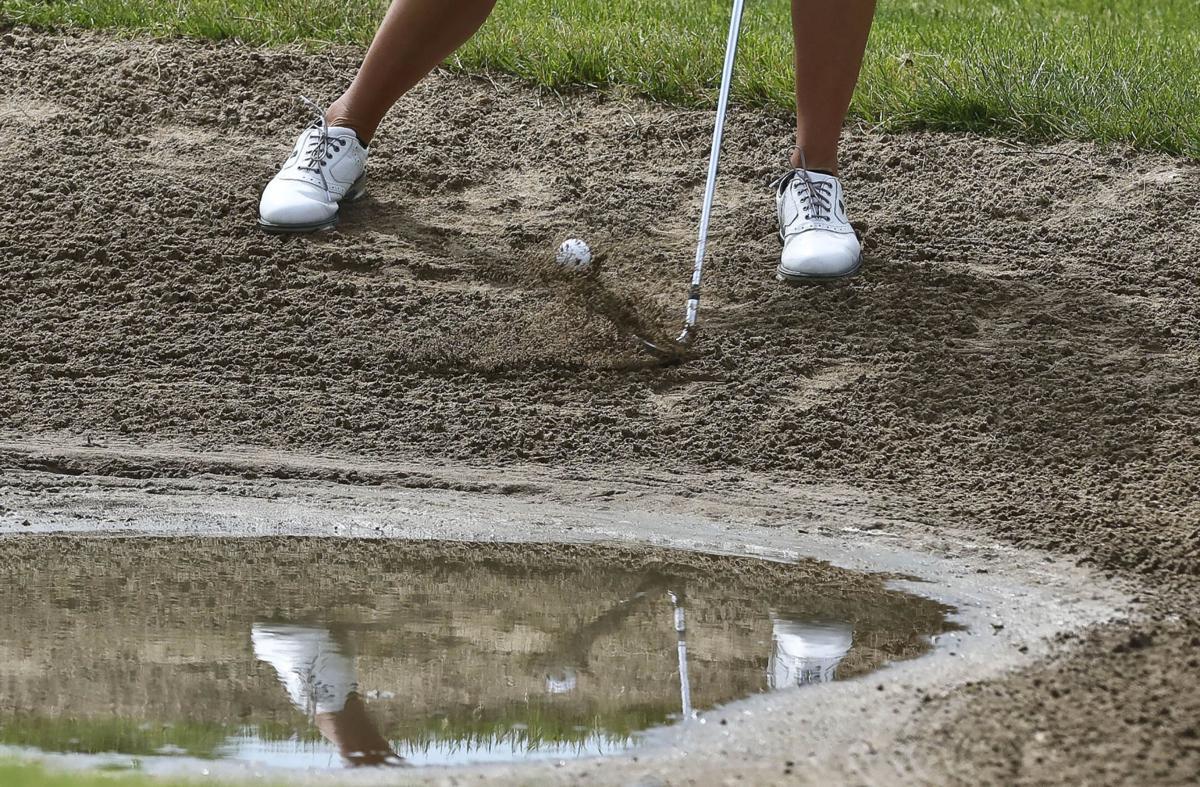 A golfer at the Forsyth Classic hits a ball while avoiding a puddle in a sand trap at Hickory Point Golf Course on Sunday, June 16. Rain storms delayed the start of the second round for six hours. 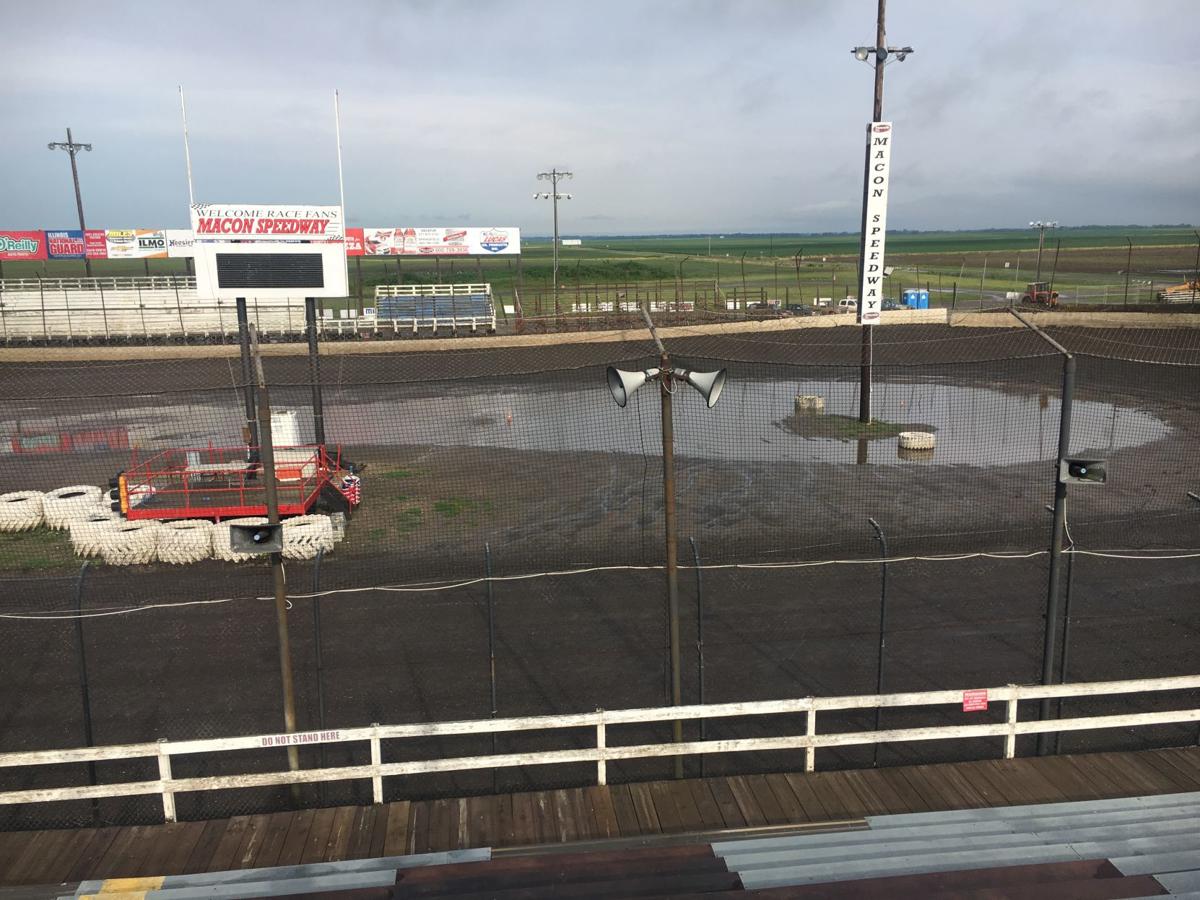 Weekend storms left standing water on the Macon Speedway grounds on Saturday, June 22. That evening's event was canceled, which was the fifth cancellation of the season. 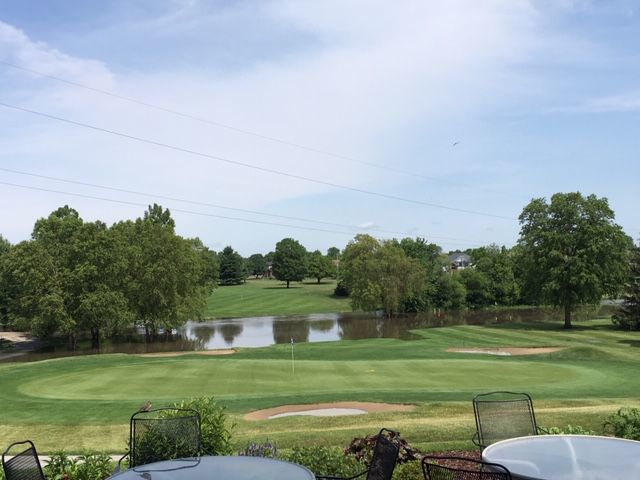 Hole No. 18 at Hickory Point Golf Courses is flooded by Stevens Creek that runs through the course on Saturday, June 22.

MACON — For the Macon Speedway this season, when it rains, it pours.

The dirt raceway hasn’t experienced a season quite like this one in its 73-year history. Rain and wet conditions have canceled five events this year — including the last two in a row — and there's a whole summer ahead.

“In my experience, we have about three rain-outs in the entire season on average, so I've never seen a year quite like this,” said Macon Speedway owner Bob Sargent.

Illinois had the third wettest May on record, according to the Illinois State Climatologist Office, and it was the sixth-consecutive month with above-average rainfall. Decatur Airport reported 8.26 inches of rainfall for the month, the sixth most on record.

That continued into June, which produced round after round of storms, a pattern that flooded roadways and sent waterways across the state higher for weeks.

Standing water remains a problem on agricultural fields. The U.S. Department of Agriculture said the planting season in Illinois is off to the slowest start on record.

The economic impact of the heavy precipitation is trickling down.

"It’s been wetter than normal, but that has been the common theme across the Midwest," said head golf professional Andy Potts. "The winter was wet too in that we had less snow and more rain than we normally have. That has contributed to winter kill, it’s a lot of extreme conditions that hurt the grass."

When the ground freezes under severely cold conditions and then temperatures rise, the top layers of soil will thaw. Any rain received will then sit above the frozen ground and drown the top grass layers, leading to large patches of dead or missing grass.

During the Forsyth Classic two weekends ago, the areas of winter kill were marked to have players avoid those areas.

"Out here in front of hole No. 2’s green, it looked like a crime scene because of all the low spots," Potts said.

Central Illinois farmers are catching up after weeks of soggy weather

They intended to open for this year's season on March 1 but poor conditions pushed that back to March 18, and even then business was extremely slow. From the beginning of April through mid-May, Hickory Point had 23 days in which they could not allow motorized carts on the course due to weather, effectively closing the course.

"You do still get the people who are used to walking but it really kills business," Potts said "A lot of people are not in shape enough or they just can’t walk that distance. Not having carts out here is almost like not being open. It has been a lot of that this year."

'The flexibility is very limited'

Golfers Bob Rubin, of Mount Zion, and Jim Markman, of Champaign, have each seen their golf play hampered by the storms.

"There were times I got ready to play, got in my car and got about halfway and then it would start to rain," Rubin said following a round at Hickory Point. "There are a few fenced off areas here where there used to be high water hazards but it is dry now. I think the course is in beautiful condition with everything so green and lush. It’s just too bad the play is down."

Markman, who plays regularly at Mahomet's Lake of the Woods Golf Course, Red Tail Run, Hickory Point and the Moweaqua Golf Course, describes himself as a "fair weather golfer."

"I try to play three times a month so I haven't been able to golf as much as I would like to due to the weather," he said. "At Lake of the Woods they had water all over the place. One of my balls landed and sunk into the ground so much that is was nearly covered."

Water has also been an issue at Hickory Point as Stevens Creek has quickly flooded the course several times this season.

"From last Wednesday to Saturday, we had between 4.5 and 5 inches of rain here at the course," Potts said. "Up here between Forsyth and Maroa on the farmland, it drains straight to Stevens Creek, which runs through the middle of the course, so it can flood very quickly."

For Macon Speedway, when an event is rained out, the income is lost — and losing 20 percent of the season’s revenue so far hurts.

“We have a 25-race window for the whole year, and so when we get five rained out, that affects us. It affects the city economics, the economic impact of the gas stations and the bars and restaurants,” Sargent said. “For Decatur’s economics, these guys are buying parts for these race cars and people travel to get to us and so it’s an economic strain on all of us.”

“We have pumps, and if we didn’t have those, then the track would just fill up like a bowl. The rain just goes to the middle and washes everything in,” Macon Speedway operations manager Adam Mackey said.

The track recovers quickly, though.

'Hard to come back from'

Showers also brought fewer people out to Overlook Adventure Park, but other Decatur Park District facilities have held their own in the inclement weather.

Purchases of rounds of mini golf at Overlook are down 842 rounds so far this year compared to last year, according to Jamie Gower, director of recreation and facilities for the park district.

"Missed rounds in general are hard to come back from on the mini golf side," Gower said. "We have had a bounce back in June, but April and May were very tough for us. We will know more in mid-July about where we are for the season."

The recently opened Devon Lakeshore Amphitheater has largely been spared any weather-related cancellations.

"Fortunately enough, knock on wood, we have been extremely lucky with the weather on the amphitheater front," Gower said. "The only thing we had to postpone was the first movie night we offered. We had rain and had to postpone but we were able to reschedule that."

Recent additions to Scovill Zoo — including an extension of the Z.O.& O Express Train and the birth of two baby penguins — have helped it recover from down months in April and May.

"Some of our facilities we were definitely affected in the spring up through May and then we did see a little bit of a bounce back at Overlook Adventure in June," Gower said. "Also Scovill Zoo has been holding its own and we’ve seen a good response for (the train extension and baby penguins) as well."

Rain also led to many cancellations in the sports leagues the District offers.

"As far as programming goes with a lot of our sports leagues — youth baseball, softball and adult softball — we have had a lot of rain outs so our staff works to do make up games on off-nights or weekends and so luckily we are able to get a lot of those covered," Gower said.

Getting people back on the miniature golf course after a rain cancellation can be a challenge, but Gower and his staff look for ways to entice customers.

"Although the weather affects us dramatically, we do our best to overcome some of those possible losses and we hope the rest of the season works out for us and the weather cooperates with us," Gower said.

Back at Hickory Point, there is hope the weather will even out. Last week's hot and humid temperatures have brought the golfers back.

"Over the last several days, since it has gotten warmer, it has picked up substantially, so hopefully we can make up for some of those lost rounds," Potts said.

Spring days that Decatur received some amount of precipitation

Inches of rainfall recorded at the Decatur Airport in May, making it the sixth wettest month on record

Average May rainfall total for Decatur

After historic rains, the next weeks are make or break for Illinois farmers

CHICAGO — The drive through rural Illinois is bleak these days.

☀️ Here's how Decatur-area workers with outdoor jobs handled this heat. Plus, your Fourth of July forecast.

MACON — Before the fireworks finished off Independence Day and the night of racing at Macon Speedway, there was a bang on lap 98 of the Herald…

CLINTON — The sugar glider may have a common name, which refers to its preference for sugary foods and its ability to glide through the air, l…

Kids get personal with tortoises during Scovill Zoo activities

DECATUR — For animal-loving kiddos who can't get enough during visits to Scovill Zoo, the monthly Zoo Buddies event offers a chance to get up …

Water fills a pump area at Macon Speedway on Thursday. Round after round of rain have delayed events across the region. 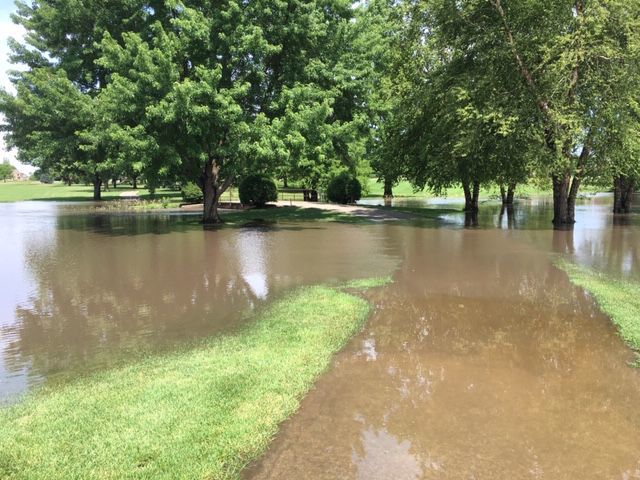 Stevens Creek spills onto the No. 18 hole at Hickory Point Golf Course on June 22. 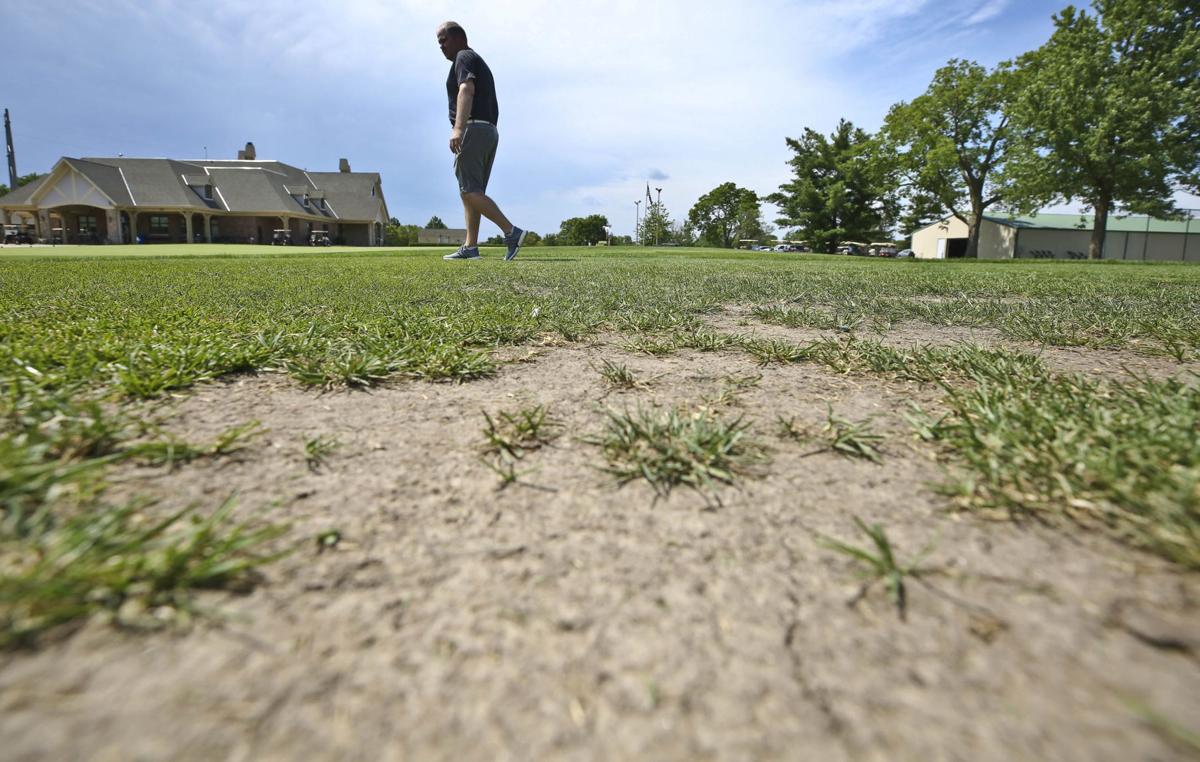 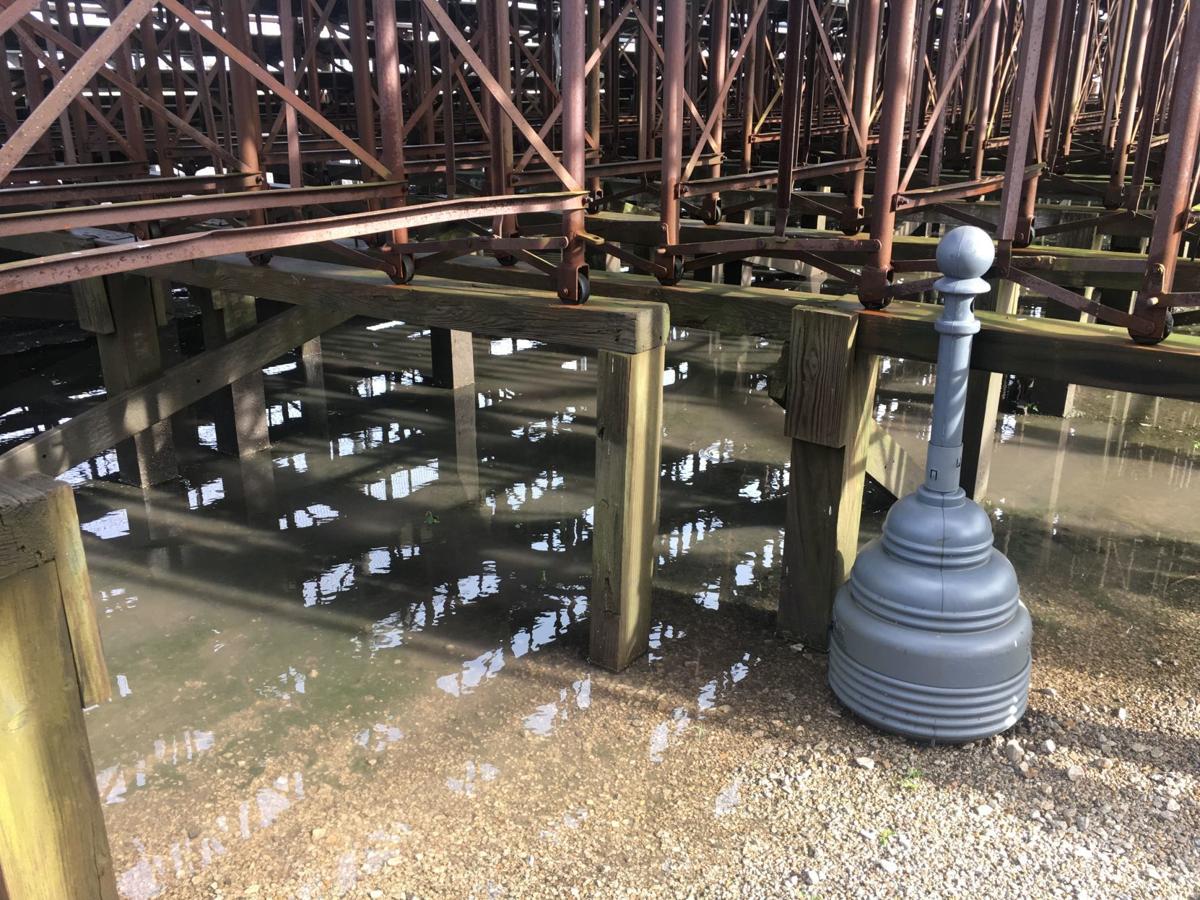 Standing water is shown under the bleachers at Macon Speedway on June 22. The past couple months have produced high amounts of rain. 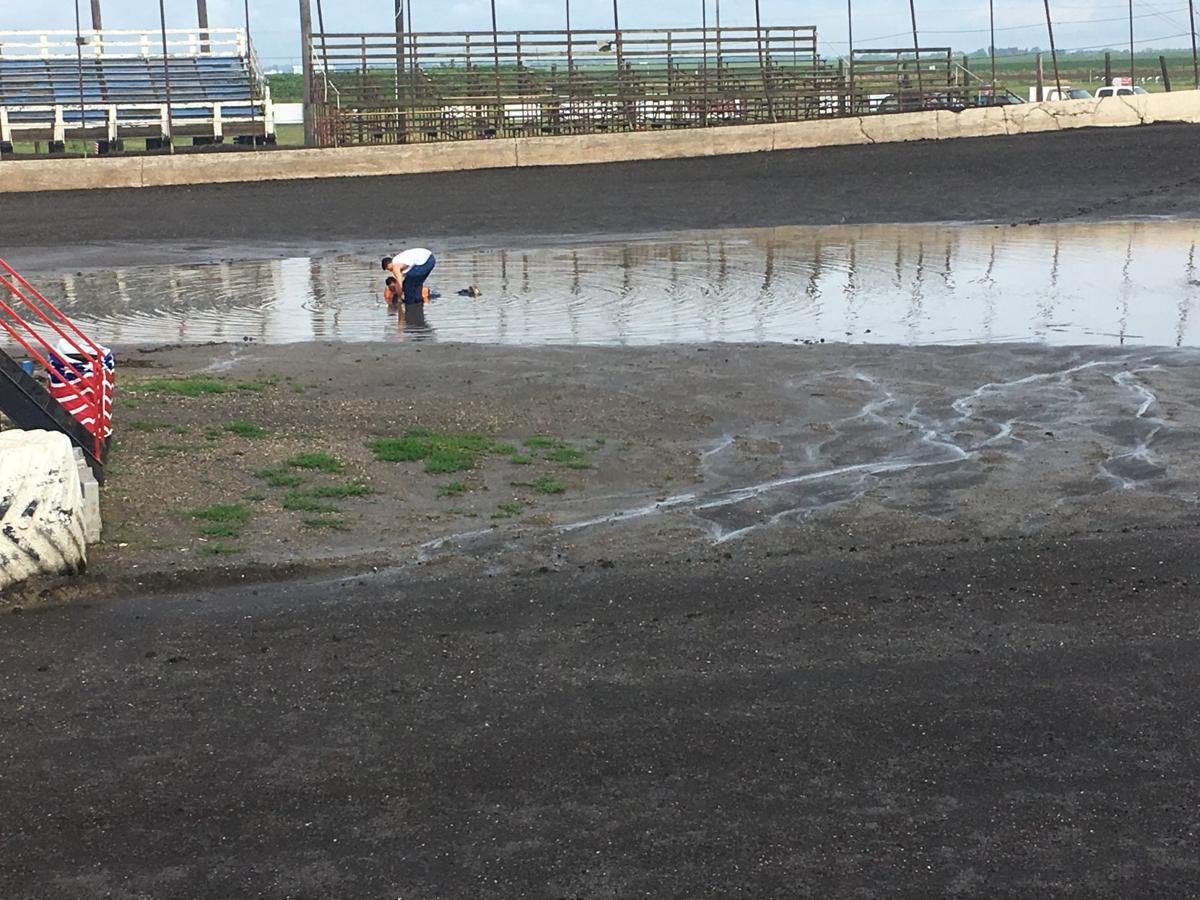 Macon Speedway employees work to reattach a water pump hose on Sunday, June 22. A series of pumps remove the water from the track to ditches outside the grounds.

A golfer at the Forsyth Classic hits a ball while avoiding a puddle in a sand trap at Hickory Point Golf Course on Sunday, June 16. Rain storms delayed the start of the second round for six hours.

Weekend storms left standing water on the Macon Speedway grounds on Saturday, June 22. That evening's event was canceled, which was the fifth cancellation of the season.

Hole No. 18 at Hickory Point Golf Courses is flooded by Stevens Creek that runs through the course on Saturday, June 22.