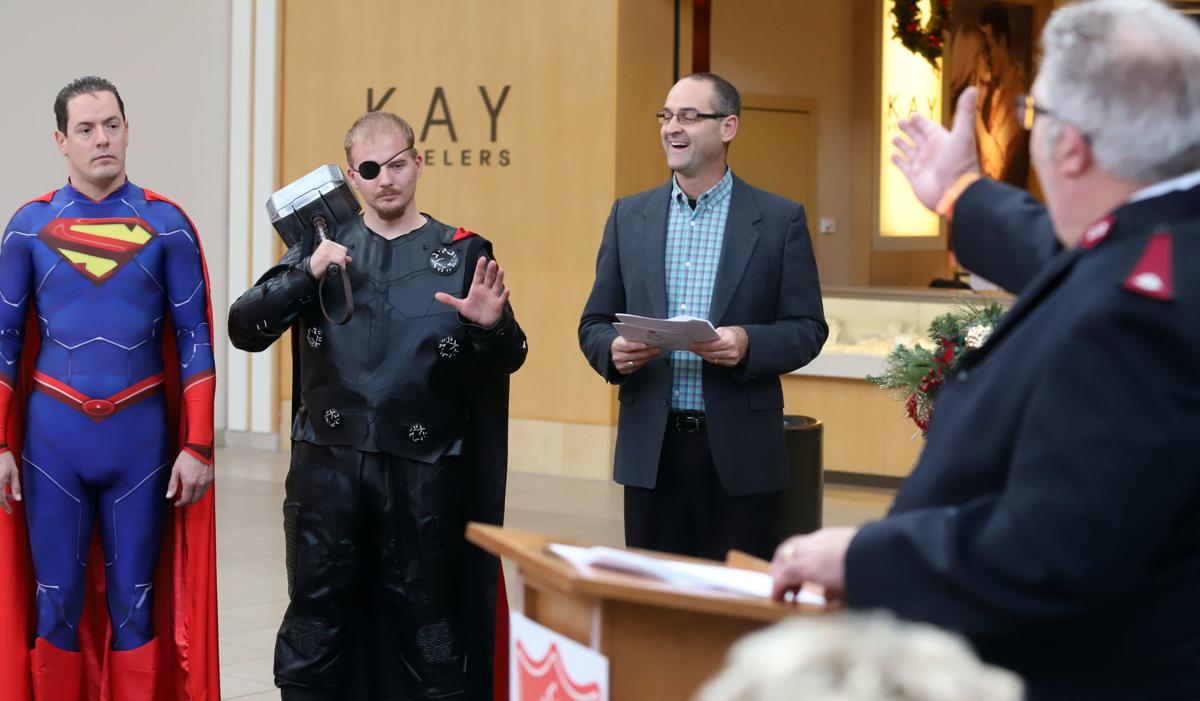 Wes Krall, left, and Clint Moore of Heroes of Legend Cosplay are thanked for their support by director of development Kyle Karsten, middle right, and Major Greg Voeller, far right, during the Salvation Army’s announcement of Christmas season fundraising activities and events at the Hickory Point Mall Tuesday morning. 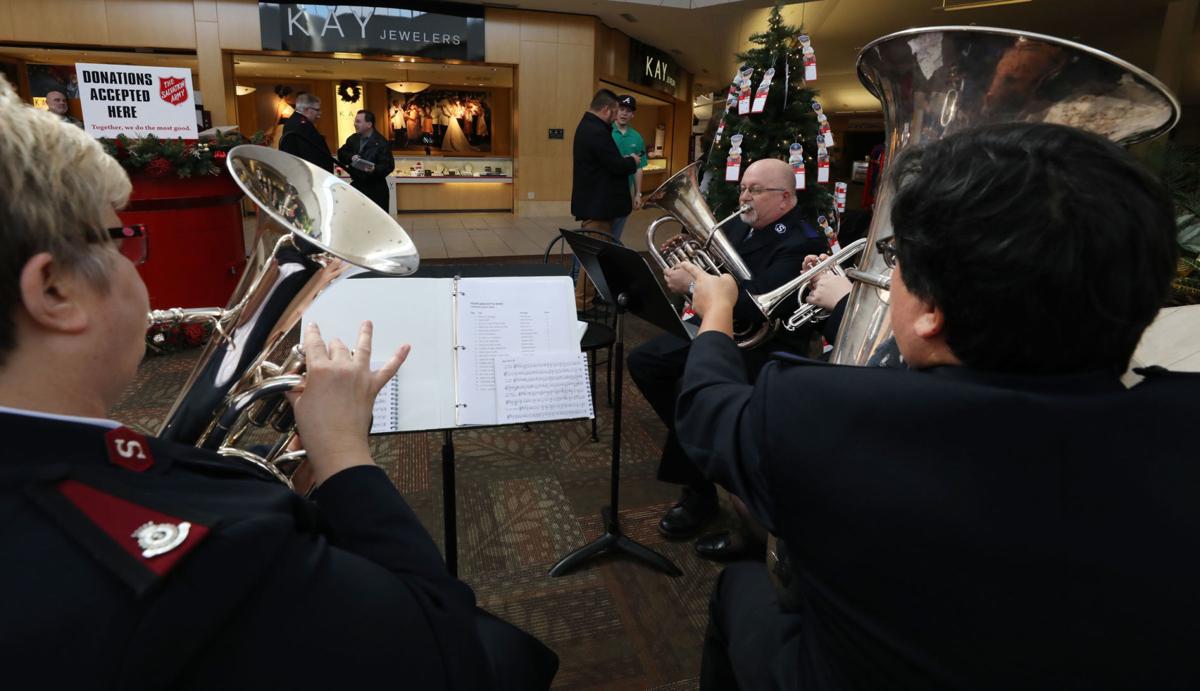 FORSYTH — The Salvation Army wants to raise $475,000 this holiday season so it can serve the community the rest of the year.

The total was announced at a kickoff event Tuesday morning at the Hickory Point Mall.

An anonymous donor already gave $100,000 to the cause, which is an incredible start to the campaign, said Kyle Karsten, director of development and community relations. The $475,000 goal is $5,000 more than the 2017 goal.

The Salvation Army expects to help 1,500 families have a better Christmas this holiday season by providing food and gifts. Applications for assistance are being taken this week at The Salvation Army, 229 W. Main St.

“We have a generous community,” Karsten said. “They are so amazing this time of year.”

Some fundraising events include the Angel Trees, Red Kettle bell ringing, a piano concert and the Red Kettle Dinner Gala. People can also buy a one-pound bag of Red Kettle Blend coffee for $10.

Karsten said Dec. 14 and 15 will be a major fundraising weekend. Gurneys, Guns and Hoses, is an event where first responders ring bells at both Walmarts in Decatur. An anonymous donor is planning to match the amount of money given that weekend, up to $25,000. The goal is for the community to raise $50,000 that weekend, Karsten said.

The donation is from a person who grew up in Decatur and has supported The Salvation Army for many years, he said.

Red Kettle donation stations will be located at the Hickory Point Mall near the main stage outside of Von Marr and at the outside door of Hobby Lobby. They  also will be at both Walmarts, Sam’s Club, and the Brettwood Village, Airport Plaza and South Shores Kroger stores.

Tammy and Jim Ashby are leading the 2018 Christmas season campaign. They will oversee the events and fundraising to ensure The Salvation Army makes its goal, they said.

Tammy Ashby worked for The Salvation Army previously and said she has a special place in her heart for the organization.

“It is something I believe in because I believe all kids should have a Christmas,” she said. “I know these kids wouldn’t have Christmas without it.”

Ashby hopes the community will surpass the goal. She said it is possible if everybody can give a little bit of money.

“It doesn’t take a lot. Just give a little, it all makes a difference,” she said.

The Salvation Army has been working in Decatur and Macon County for 130 years. It provides food, shelter, crisis assistance, toys, education and religious assistance for those in need. The work is made possible by the donations and support of the community, Ashby said.

“The Salvation Army cannot do it alone,” she said.

Majors Gregory and Carla Voeller will be spending their first Christmas season with the Decatur Salvation Army. Gregory Voeller said he is excited for the different events coming up like the Julie McClarey & Friends Piano Concert and the Red Kettle Dinner Gala.

“We appreciate everybody’s help whether they volunteer their time or if they donate funds, or help ring bells,” Voeller said. “We are always happy to accept whatever help people want to give.”

The piano concert is a free event scheduled for 2 p.m. Sunday, Nov. 18, at Tabernacle Baptist Church, 650 N. Wyckles Road in Decatur. Donations will be collected.

Representatives of the Golden K Kiwanis Club, Land of Lincoln Credit Union and Heroes of Legend Cosplay were present at Tuesday's kick off event to show their support for the cause.

Wes Krall, CEO of Heroes of Legend Cosplay, and Clint Moore were at the event in superhero costumes. Krall and Moore, along with others in their group, ring bells and sing Christmas carols to encourage people to donate.

“We want to help the community, and The Salvation Army is one of the biggest things we can do,” said Krall, who was dressed as Superman.

Moore, who was dressed up as Thor, used to work for The Salvation Army.

“I’ve always loved giving back to the community,” he said.

Dan Sebok, president of Decatur Golden K Kiwanis, said his group puts in a significant effort to support The Salvation Army. They volunteer for the Angel Tree, the toy distribution, they ring bells outside of stores and distribute food baskets.

“Our motto is to serve the children of the world, and The Salvation Army fits right in with our message,” Sebok said.

How to apply for Christmas food, toy assistance from the Salvation Army

DECATUR — Residents in need of Christmas-time assistance from The Salvation Army are encouraged to apply for two projects. One is the Christma…

Where did the Krekel's chicken cars go? We found out.

THE POLLS HAVE CLOSED: Counting underway across Illinois

With the exception of a few precincts reporting technical problems, the polls have closed in Illinois and the waiting on results has begun.

Snow is on the way for Central Illinois tonight, could cause slippery roads

DECATUR — An unseasonably early snowfall may create slippery road conditions Friday morning in Macon and surrounding counties, according to th…

DECATUR — Award-winning pianist Julie McClarey has invited her friends to join her on stage for the third “Helping Hands at Home” piano concert.

DECATUR — The Decatur Hockey Fights Cancer Alumni Game will be Saturday, Nov. 24 at the Decatur Civic Center. The Junior alumni team will comp…

DECATUR — The Dance Centre will give a Christmas-themed recital at 5 and 7 p.m. Saturday, Dec. 1, at Lampstand Church, 655 S. Airport Road, to…

GIVING TUESDAY: After Thanksgiving, Decatur turns out to help out 💖

DECATUR — Frigid temperatures and flurries might have provided a good reason to stay at home Tuesday, but the cold didn't bother community mem…

Police vs. fire vs. paramedics: Who raised the most money for Decatur's Salvation Army?

DECATUR — The friendly competition between Macon County law enforcement agencies and fire departments raised more than $18,000 for The Salvati…

Wes Krall, left, and Clint Moore of Heroes of Legend Cosplay are thanked for their support by director of development Kyle Karsten, middle right, and Major Greg Voeller, far right, during the Salvation Army’s announcement of Christmas season fundraising activities and events at the Hickory Point Mall Tuesday morning.