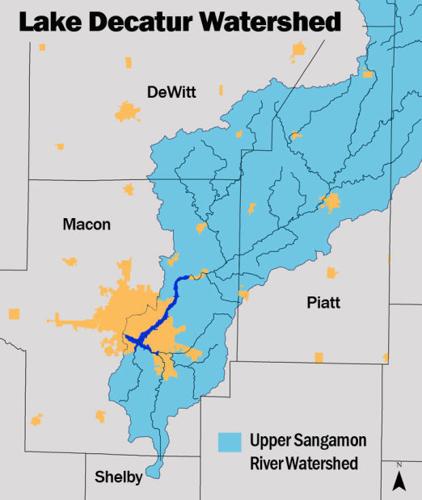 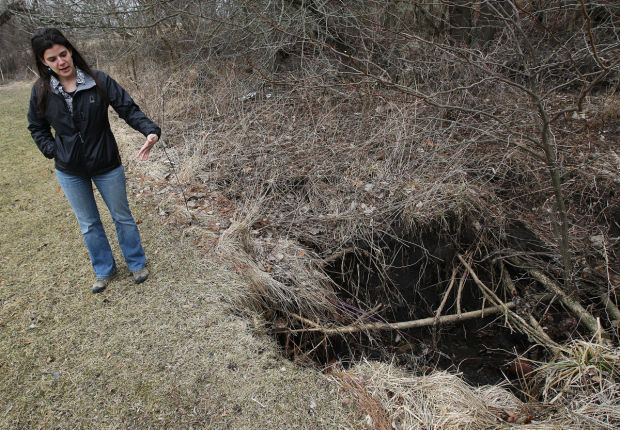 Watershed specialist Megan Baskerville shows a gully formed by erosion at Big Creek in Dalton City. Baskerville says the erosion problem will be alleviated, starting with the upcoming implementation of the stream bank restoration project. 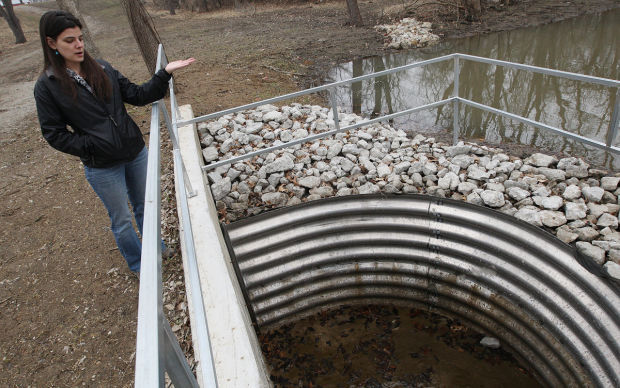 Watershed specialist Megan Baskerville explains how the Prairie Flower Montessori School toewall, at a watershed on the south side of Decatur, prevents sediment from flowing into Lake Decatur.

DECATUR – The Sangamon River supplies water to hundreds of thousands of homes on its 215-mile path through Central Illinois.

As a young man, Abraham Lincoln floated down it to the Mississippi River on a flatboat. It is home to aquatic life and winds through dozens of conservation areas, providing scenic views for nature lovers.

But despite its essential role, life in Central Illinois has take a toll on the river's health, including Lake Decatur.

As reported in the 2014 Impaired Waters of Illinois list, mercury, PCBs and fecal coliform were discovered in parts of the Sangamon River, making fish unsafe to eat and physical contact, such as swimming or water skiing, potentially hazardous.

“When you say it's good, bad or ugly, it's from what use are you talking about,” Gregg Good said.

Good works in the division of water pollution control for the state EPA. His staff monitors water chemistry, biology and habitats to determine how healthy a waterway is for its intended use.

Lake Decatur's condition does not support aquatic life, fish consumption and aesthetic quality. It is good for public and food processing water supply, according to the report.

The Sangamon River starts in Ellsworth, just east of Bloomington, before curving through Ford, Champaign and Piatt counties. It drains into Lake Decatur and after continues on to Springfield where it splits. The main branch flows north, eventually draining into the Illinois River near Beardstown.

Good said it was a common practice for early Illinois cities to dam rivers with a large watershed to ensure a large public water supply But that also increases the speed at which soil builds up. In 1922, when Lake Decatur was completed after damming the Sangamon River, 41 percent of farms with water draining into the river grew corn and soybeans. Now, 87 percent of the 925-square-mile watershed are row crops.

Keith Alexander, Decatur's Water Management director, said the city does a number of projects to improve the Sangamon River on its way to the lake. Preventing erosion and sediment buildup is the top concern.

The city recently approved an $89 million project to dredge Lake Decatur and increase its holding capacity by 30 percent. The three entryways will be covered with sediment traps to stop more soil from coming in.

Alexander said any pollutants in the lake, such as chlordane and mercury, are not a threat to drinking water supply.

“We are able to treat, remove and purify that water before it reaches the customers,” Alexander said.

Other crop nutrients, such as nitrogen and phosphorus, wash into the Sangamon watershed after farmers fertilize.

“Literally, half a million acres of some of the world's best farm grounds drain into Lake Decatur,” Alexander said.

The city has partnered with the Macon County Soil and Water Conservation District since the 1940s to reduce the nutrients and soil in the lake and prevent further dredging.

With funding from the city, the Lake Decatur Watershed Program develops projects and provides grants for landowners to keep dirt and fertilizer out of watershed. Projects range from grass-lined waterways or stream bank restoration to terrace farming.

On the surface, extra phosphorus and nitrogen may not sound like a bad thing.

However, when bacteria start eating the excess dead algae, they use up oxygen and create dead zones and fish kills. It's these cause-and-effect scenarios that Baskerville is trying to prevent.

One site at the Prairie Flower Montessori School on the south side of Decatur finished a grant project in October. The concrete headwall for the school's wetland broke recently. Because the wetland drains into Lake Decatur, the conservation district helped them replace the circular basin, which slows the water down, keeping soil out of the lake.

The district works with national and local agencies to find more funding for projects and raise awareness.

“We pretty much all have the same mission: an overall healthy ecosystem,” Baskerville said.

Since the federal Clean Water Act went into effect in 1972, Good said Illinois waters have slowly improved through the work of multiple organizations. Good said individuals can help by improving their septic systems, limit applying manure to fields and monitor their land for erosion.

“We get smarter as we get older,” Good said.

DECATUR – Less than a month after it was installed, the barrier designed to keep invasive Asian carp out of Lake Decatur has failed.

DECATUR -- The city’s $89 million dredging project for Lake Decatur is under way, but wet weather has kept the work from progressing too far.

Farmers urged to help in fight against erosion

Watershed specialist Megan Baskerville shows a gully formed by erosion at Big Creek in Dalton City. Baskerville says the erosion problem will be alleviated, starting with the upcoming implementation of the stream bank restoration project.

Watershed specialist Megan Baskerville explains how the Prairie Flower Montessori School toewall, at a watershed on the south side of Decatur, prevents sediment from flowing into Lake Decatur.