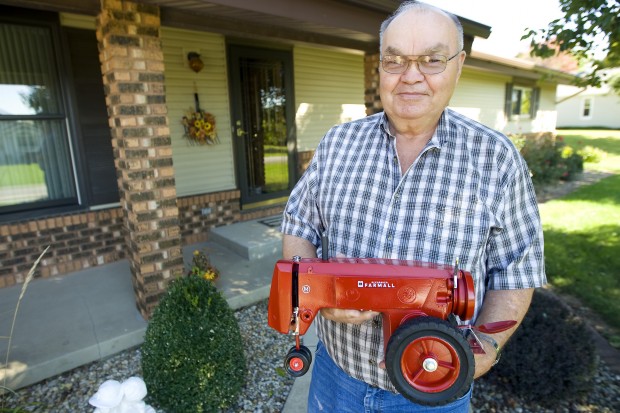 Herald & Review/Stephen Haas Roy Gaunt holds one of the model tractors he made out of an old sewing machine at his home Wednesday morning in Shelbyville. 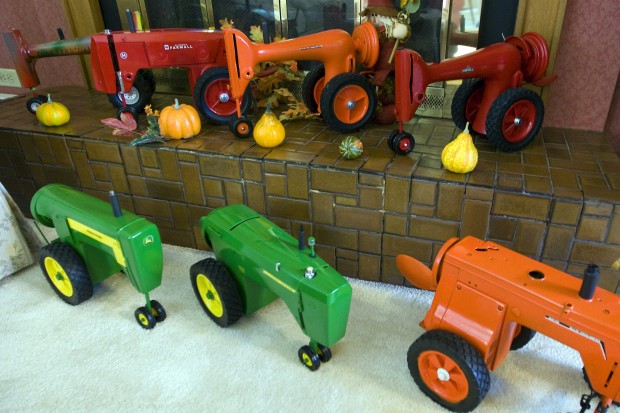 Herald & Review/Stephen Haas Some of the tractors Gaunt has built. 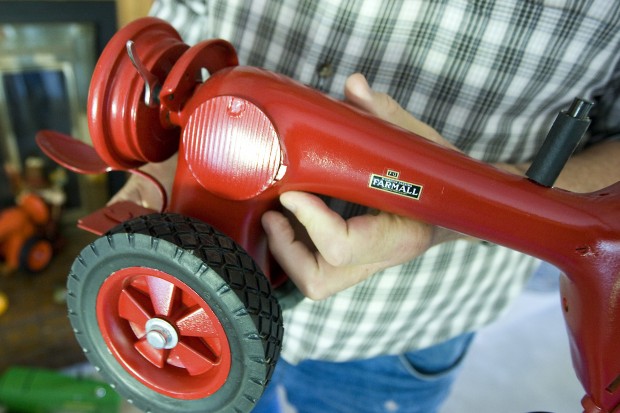 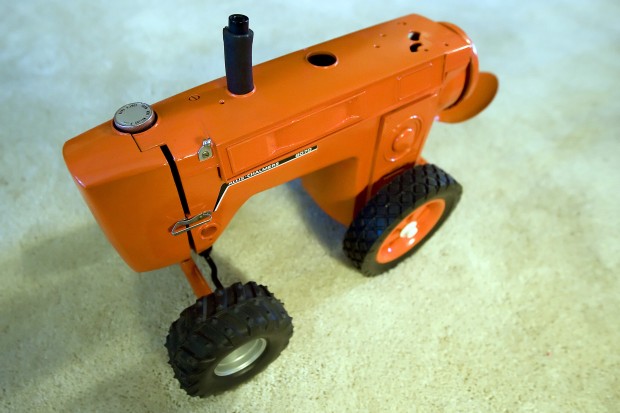 SHELBYVILLE - The Bible says, "They shall beat their swords into plowshares, and their spears into pruning hooks."

There's some dispute among scholars about this, but the passage from Isaiah is widely interpreted to mean the sword and spear bashing will coincide with the establishment of a future Messianic Kingdom of God on Earth.

That could take awhile. In the meantime, we can enjoy the handiwork of Shelbyville's Roy Gaunt, who is busy in his basement workshop beating antique sewing machines into models of vintage farm tractors.

Well, it's not so much beating as it is a careful laying of hands to remove bits and add bits, rounded off by skillful painting in authentic factory colors. The results are a major transfiguration: sewing machine bodies morphed into John Deere, Farmall and Allis-Chalmers tractors from the nostalgic heyday of the American family farm.

Gaunt explains that the bodies of old Singer machines and others from the 1800s and first third of the 20th century do actually look remarkably like the chasses of old farm tractors. His art is to heighten the visual tromp l'oeil effect with skilled tweaking here and there. Wheels from a push lawnmower become the big back tires, while front wheels, attached to adapted needle shafts, are the same ones found on Ertl-brand farm toys.

A particularly effective touch is the vertical mufflers above the engine canopy. "I use pieces of vacuum hose slipped over a little piece of round metal rod that I cut to length and paint," he said.

His tractor seats are liberated from the cutlery drawer in the shape of soup spoons bent to the correct angle, the bowl of the spoon a perfect miniature butt-shape. "And the older seats had holes bored in them, so I do that, too," said Gaunt, 71.

Wife Eleanor Gaunt says her husband is blessed with mechanical acumen and an eye for understanding what works visually. "Just always a very observant person," she says. "He sees things most people would not see. He's very good at noticing details."

Gaunt used to get detailed knowledge of real tractors every day as a farm boy growing up in Iowa, who first drove the family's 1930s F-20 Farmall when he was 7. Gaunt stayed down on the farm into the turbulent 1980s, when staggering interest rates ripped a hole in the fabric of American rural life and, as singer John Mellencamp put it, there was "blood on the plow."

Separated from the land, he needed a job and moved with his wife and two sons to Central Illinois, where he worked for a farm supply company. He stayed there until retirement in 2002 and worked part time in another job for five years until some creeping health problems demanded retirement take a more comprehensive form.

The old farmer had seen a magazine story about a guy who did the sewing machine-tractor thing and decided it sounded fun and doable now that he had the time. "I kept the idea in the back of my mind for three or four months and then just thought, 'Well, I really could do that,' " he recalls. "And so I made one."

That stitch in time occurred about a year ago, and he's been on a roll ever since, cranking out tractors that sell for prices starting at $60 and do a good job of cultivating their own word of mouth advertising. "They are conversation pieces, and no two are exactly the same," he says. His wife even managed to sell one just chatting to her hairdresser about them.

"The lady needed one for a birthday present for her husband," recalls Eleanor Gaunt, 69. "You guys are hard to buy for."

Gaunt usually builds to order and, pedal to the metal, he can piece together a sewing machine tractor in about two weeks. He's constantly on the lookout for vintage sewing machine raw materials but says the golden thread of prosperity sometimes loops right around tractor conversions and ends up back at the machine itself.

"I run ads seeking sewing machines and think I bought about a dozen this one time, and I noticed a machine in there that had a kind of a unique cover over it," he says. "I didn't tear it down right away but did some research and ended up selling it to a private party for more than I could have received if I'd made it into a tractor. I guess I'm learning."

If you would like Roy Gaunt to create a sewing machine tractor for you, call 774-3377.

Order would give the city the authority to pull liquor and business licenses from those businesses that are not enforcing the guidance to wear a mask.

Police on Thursday morning responded to a vehicle that went into a building.

A Macon woman who denies partnering with her boyfriend to sexually assault three children under the age of 13 appeared in court Tuesday saying she has changed her mind about a jury trial.

Crews are deep cleaning and disinfecting ​the location, health officials said in a statement.

An update on the emergency order issued for Decatur.

Data shows wide gaps in the race of local law enforcement and that of the communities they serve.

Police said a minivan also was found to be damaged by gunfire. No injuries were reported.

Police Officer Bradley Evenson said the victim told him he had been asleep in his apartment when he woke up to find his neighbor walking in armed with a “black police stick.”

Herald & Review/Stephen Haas Roy Gaunt holds one of the model tractors he made out of an old sewing machine at his home Wednesday morning in Shelbyville.

Herald & Review/Stephen Haas Some of the tractors Gaunt has built.