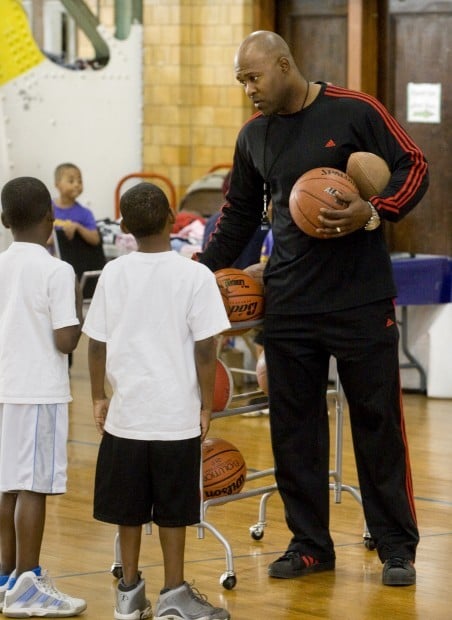 HeRodney Walker, owner of SkyWalker International Sports Complex, talks to two children during a basketball tournament at his gym in Decatur. 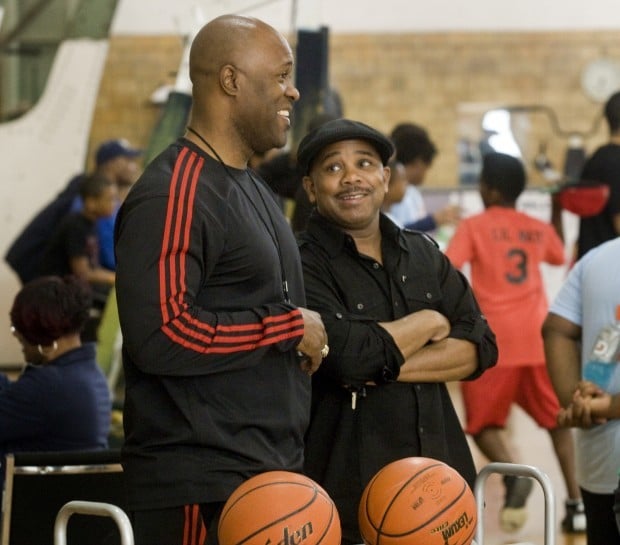 Rodney Walker, left, talks with long-time friend the Rev. Tony Carson during a basketball tournament at Walker's gym in Decatur. As a boy, Walker used to play basketball at Carson's house.

DECATUR — Rodney Walker has returned to Decatur with a splash but said he’s also willing to make a splash somewhere else if Decatur ever gets tired of him.

Walker, a 1991 St. Teresa High School graduate, became a success by being flexible. He wanted to play in the NBA after his college days but, instead, settled on a lucrative international playing career that spanned six countries. Walker could have played longer but retired in 2005 because his family was growing and he had an itch to get the next phase of his life started.

That phase has included getting his degree at Millikin University; becoming involved in pharmaceutical sales and distribution; opening an all-purpose athletic facility, SkyWalker International Sports Complex; and recently trying his hand at running a sports bar, the Sky Box Restaurant and Sports Bar.

Walker was born in Decatur and made a name for himself as a basketball player at St. Teresa, where he is still the school’s all-time leading scorer, with 1,328 points. Even in high school, his coach at St. Teresa, IBCA Hall of Famer and current Quincy High School coach Sean Taylor, said he could tell Walker was going to be something special.

“He was a really great player, and that part was obvious,” Taylor said. “But he was just so much fun to coach and so charismatic.”

Walker originally planned to play college basketball at the University of Illinois, but a low ACT score forced him to go to junior college in Michigan first. After two years, he had the choice to go to Illinois or New Mexico State, and he chose the latter.

“A lot of people hated me for that,” said Walker, laughing. “But New Mexico State was a lot better than Illinois at that time, so I decided to go west.”

Walker was an All-Big West first team selection in 1995, leading the team with 15.7 points per game. He also had personal success there. He met his wife, Karen, who was the Aggies’ cheerleading coach.

“We dated on the down-low for a while,” said Karen Walker, a native of Santa Fe, N.M. “We wanted to keep it quiet and take it slow. Eventually, though, we fell in love.”

Walker was originally projected as a late second-round pick in the NBA draft, but labor issues caused several underclassmen to declare early, and Walker was pushed out. He went to Magic Johnson’s summer camp for players trying to get seen professionally and lived in a room at former WNBA player Lisa Leslie’s house in Los Angeles. On the last day of camp, he was signed by a team in Taipei City, Taiwan.

“I’m playing out there all summer, then on the last day of the summer league, I get this offer to go to Taipei City for $60,000 a year, and I was gone; it had been a long summer,” he said. “But Taiwan is one country I don’t ever care if I go back to. I was there six months, and that was six months too long.”

The Walkers enjoyed their next stop in English-speaking Australia much more, and Rodney Walker’s success on a four year-stint paved the way for what he’s done since. Walker scored close to 30 points a game in Australia and led his team to a championship. He was also given a sponsorship by McDonald’s that not only helped fund his projects since returning to Decatur, but fed his family for a few years.

“All I had to do was wear the McDonald’s logo on my wristband and the back of my jersey,” Walker said. “They gave me a lot of money, and they let my family eat for free at McDonald’s whenever we wanted. They shouldn’t have done that. We ate there breakfast, lunch and dinner. I bet we ate $20,000 in McDonald’s while I was there.”

But it was more than the McDonald’s that drew the Walkers to Australia. Rodney and Karen Walker were married there, and some of their best friends to this day are from Australia.

“We got there, and the people were so friendly; we weren’t used to people being nice just to be nice,” Karen Walker said. “We have friends there we met through basketball and cheerleading who come here to see us now. We had eight people here from Australia for Christmas.”

The Walkers were in Australia for four years when a combination of the country’s poor economy and a nagging knee injury for Rodney Walker forced them to move again.

The knee injury spelled the beginning of the end for Walker’s playing career. Recovery and rehabilitation cost him more than a year-and-a-half on the court.

When he was finally healthy, he ended up playing in Brazil and still averaging more than 20 points a game. But in 2005, Walker decided to retire from basketball and come home to Decatur. The Walkers already had a son R.J., now 8, and they were expecting their daughter, Sydney Sky, now 6.

“I probably quit a little early, but I wasn’t what I was before the injury, and it was time to get back in the real world and get my feet set,” Walker said. “Decatur just made sense for us. My mom and dad were here. My friends were here. I could hit the ground running in Decatur.”

Walker got his degree from Millikin University after returning, and in 2007, he bought the old armory building and changed it to SkyWalker International Sports Complex, a haven for sports, including basketball and boxing, particularly for youth.

“I had a gym in Australia where we had youth camps and things like that, so I was fortunate to find a building here I could do the same,” Walker said. “And SkyWalker continues to boom.”

Then, recently, a liquor license opened up, and Walker was able to realize another dream: owning a sports bar. He opened the Sky Box Restaurant and Bar on 2201 E. Wood St.

“A lot of people like clubs, but I prefer a place where you can watch the game, get something to eat and network,” Walker said.

While Decatur was a natural choice for Walker, and it’s been a mutually beneficial reunion, he’s not one to anchor himself. He said if things get stagnant, he’ll move on.

“I feel like I can take my show on the road almost anywhere,” Walker said. “My wife, in the drop of a dime, would go back to Australia.

“I don’t mind Decatur; I’ve done well here, and I’ve had a good response from the community. But if it gets boring and everyone gets over the big show, I’ll take it somewhere else. I’m used to moving.”

- Home of Decatur Christian basketball and volleyball. And, for the next three years, it will be used for the Decatur public school district during its renovations on MacArthur and Eisenhower high schools. The facility also holds boxing and MMA shows.

- Lounge includes 30 televisions, including 10 plasma screens and two projection screens and are equipped with all the Direct TV sports packages for the NFL, NBA, NHL, MLB, college basketball and college football, as well as all the big boxing and UFC pay-per-views.

- Amenities include pool tables, darts and a satellite juke box.

Decatur goes after the common core in education

DECATUR — When No Child Left Behind became law, states were allowed to set their own standards by which to measure student achievement.

Watch now: Pritzker talks about decision not to attend Lollapalooza

HeRodney Walker, owner of SkyWalker International Sports Complex, talks to two children during a basketball tournament at his gym in Decatur.

Rodney Walker, left, talks with long-time friend the Rev. Tony Carson during a basketball tournament at Walker's gym in Decatur. As a boy, Walker used to play basketball at Carson's house.