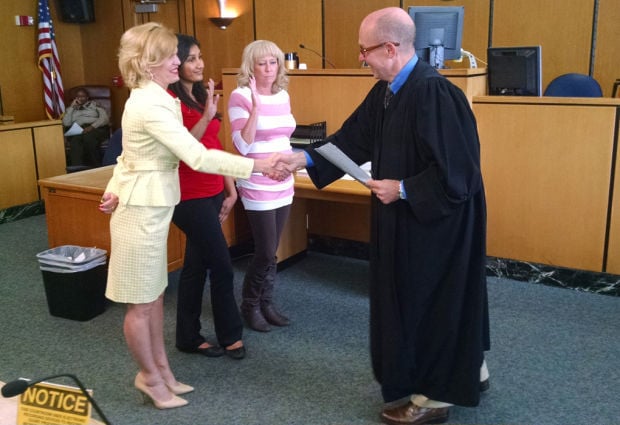 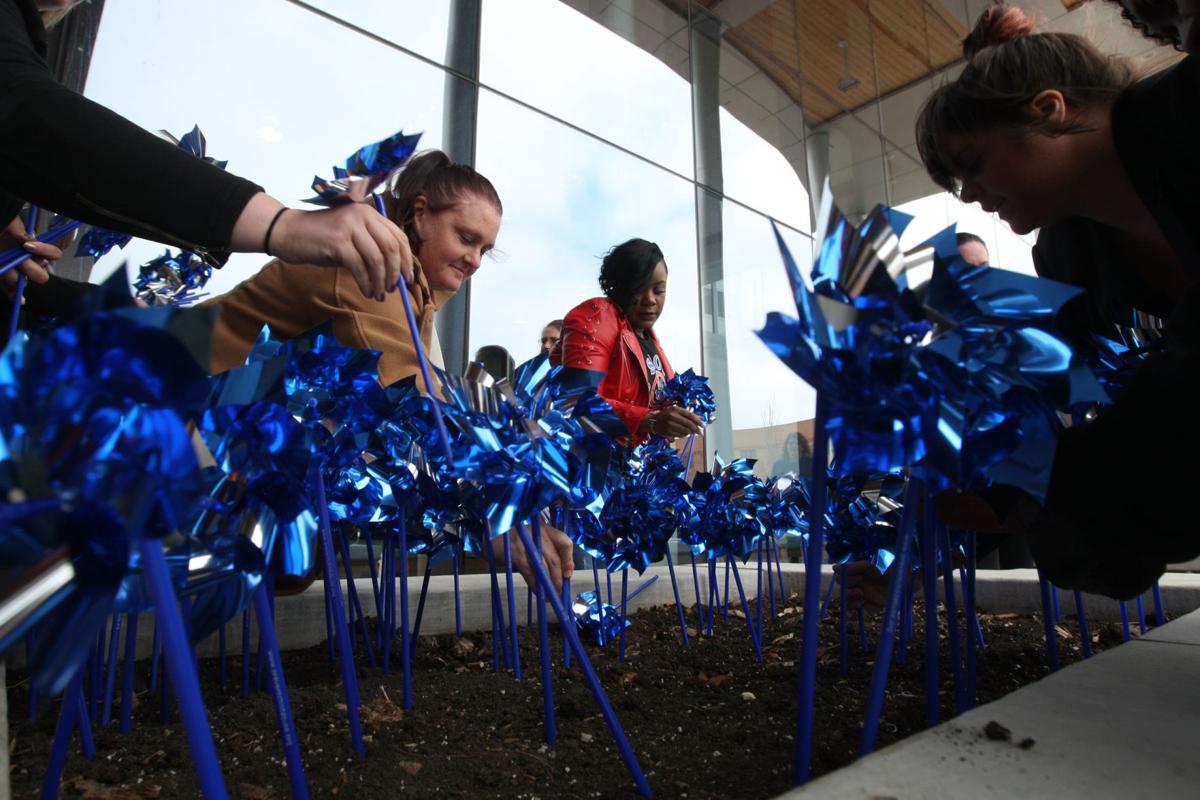 JIM BOWLING, HERALD & REVIEW Attendees place pinwheels, a national symbol of child abuse prevention, in planters in front of HSHS St. Mary’s Hospital on April 4. The planting of the pinwheels was part of an event hosted by the hospital, Illinois Department of Child and Family Services and Prevent Child Abuse Illinois to kick off Child Abuse Prevention Month in April.

DECATUR — The number of kids put under the supervision of the Macon County court system because of child abuse incidents increased 44 percent in 2017 from the year before. Organizers of a panel discussion Tuesday are working to see that trend decline.

“We need to enlist everyone (for prevention) so we don’t have so many children to deal with in Macon County,” said Steve Miller, executive director of the Macon County Court Appointed Special Advocates, a nonprofit organization that assists with abused or neglected children in the legal system.

Macon County last year reported 87 additional kids compared to 2016. Children in care are supported by the Department of Court Family Services, CASA, child welfare agencies, courts, law enforcement, educators and health care, Miller said. But the missing component that officials hope to improve through awareness efforts is the community working to address this problem and support parents and families who are struggling, he said.

Kaufman, a Prevent Child Abuse Illinois prevention specialist for the central region, said prevention must be a goal for the overall community to protect children and families before trauma occurs.

This can be done through programs for new parents, encouraging positive behaviors instead of reacting to negative ones and creating a trusting relationship between social service professionals and families. The panel said the stigma around seeking help as parents should be diminished so people who need assistance or guidance can ask for it.

“Trust is what is going to start making a change,” Kaufman said.

Part of this can be providing information about traumatic experiences to people in schools or other areas where children are. Oftentimes people don’t know how to recognize when children are exhibiting certain behaviors because of trauma in their homes, panelists said.

These behaviors are brought on by stress conditioning and children operating in survival mode for long periods of time, Biehl said. Children sometimes show signs of abuse through these behaviors that are strange in situations, such as suddenly wetting the bed, growing shy, becoming angry or acting like a parent.

A child who suffers abuse may experience more triggers in school or other activities, which can come across as bad behavior but may have a deeper reason, Biehl said.

The perception of the programs can prevent those from seeking help, Husemann said. People are afraid of getting involved with the state, she said. But it isn’t necessarily a bad situation.

“We are not baby rescuers,” she said. “We are not here to raise a group of children in the system but to heal families.”

There were also representatives from community organizations to provide more information to parents, guardians and others interested in volunteering for services.

More information is at preventchildabuseillinois.org.

The event was organized as part of National Child Abuse Prevention Month, which started in 1983. The group National Children’s Alliance estimates nearly 700,000 children are abused annually in the U.S.

DECATUR — A Decatur man is facing multiple felony charges after police said he repeatedly sexually assaulted a boy over a period of years, fro…

DECATUR — As child abuse cases increase in Macon County, one organization dedicated to the problem needed more employees and more space. The M…

Heritage Behavior Health Center getting a facelift in downtown Decatur

DECATUR — The 200 block of West Prairie Avenue was closed Tuesday and will open again by Friday, while Heritage Behavioral Health Center makes…

DECATUR – Amanda Ryder has seen the difference a trauma-informed perspective has made at Argenta-Oreana Elementary School, where she's the principal.

JIM BOWLING, HERALD & REVIEW Attendees place pinwheels, a national symbol of child abuse prevention, in planters in front of HSHS St. Mary’s Hospital on April 4. The planting of the pinwheels was part of an event hosted by the hospital, Illinois Department of Child and Family Services and Prevent Child Abuse Illinois to kick off Child Abuse Prevention Month in April.