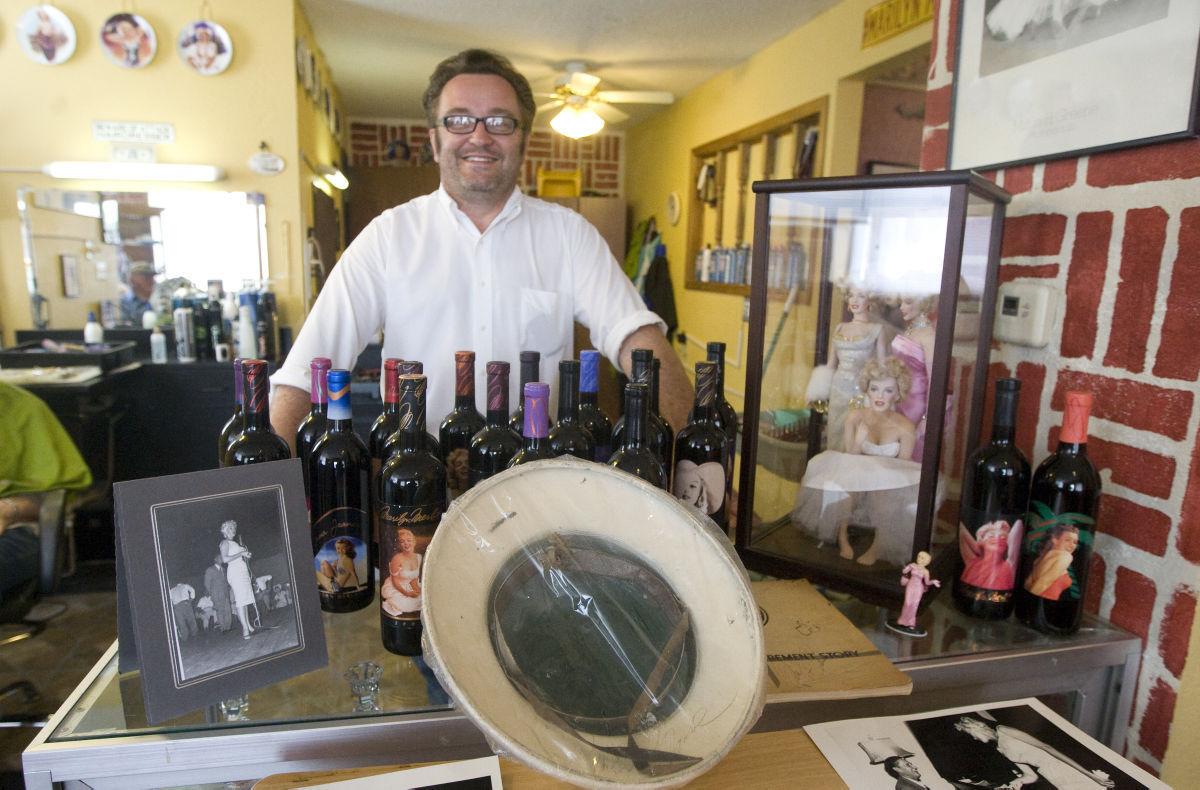 Pat Tieman has filled his downtown Bement Salon 101 with a variety of Marilyn Monroe items, a few of which include the movie star's autograph.

Marilyn Monroe chose William G. Porter's beard as her favorite during her visit to Bement in 1955. 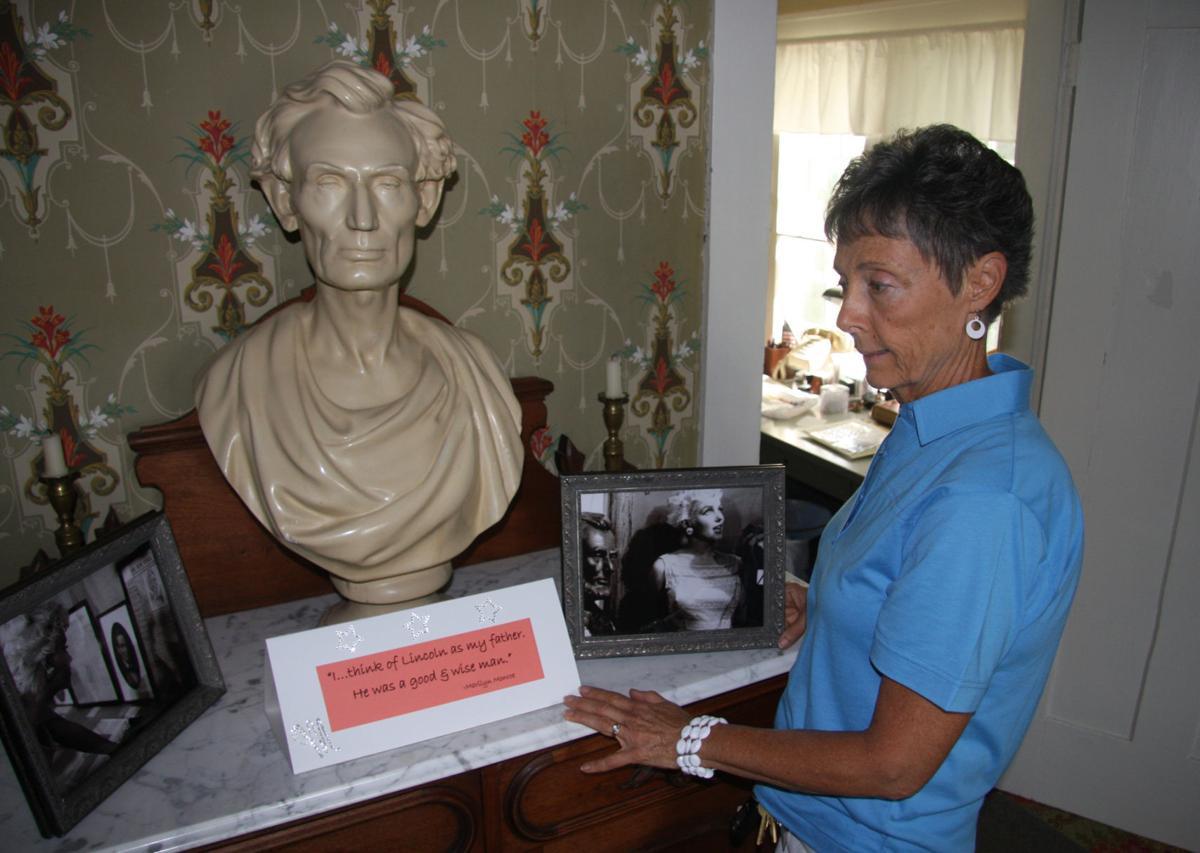 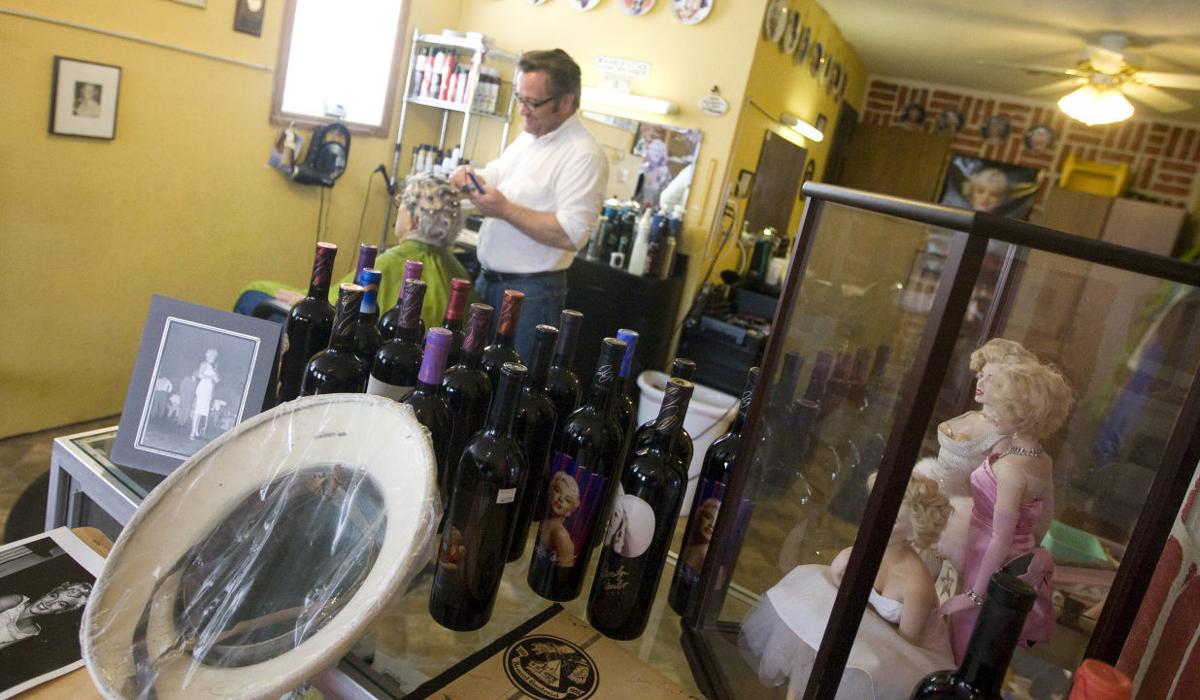 Patrons at Salon 101 in Bement are surrounded by visions of the famous actress who visited the town 60 years ago. Pat Tieman runs the salon and also owns the house where Marilyn Monroe stayed in Bement. 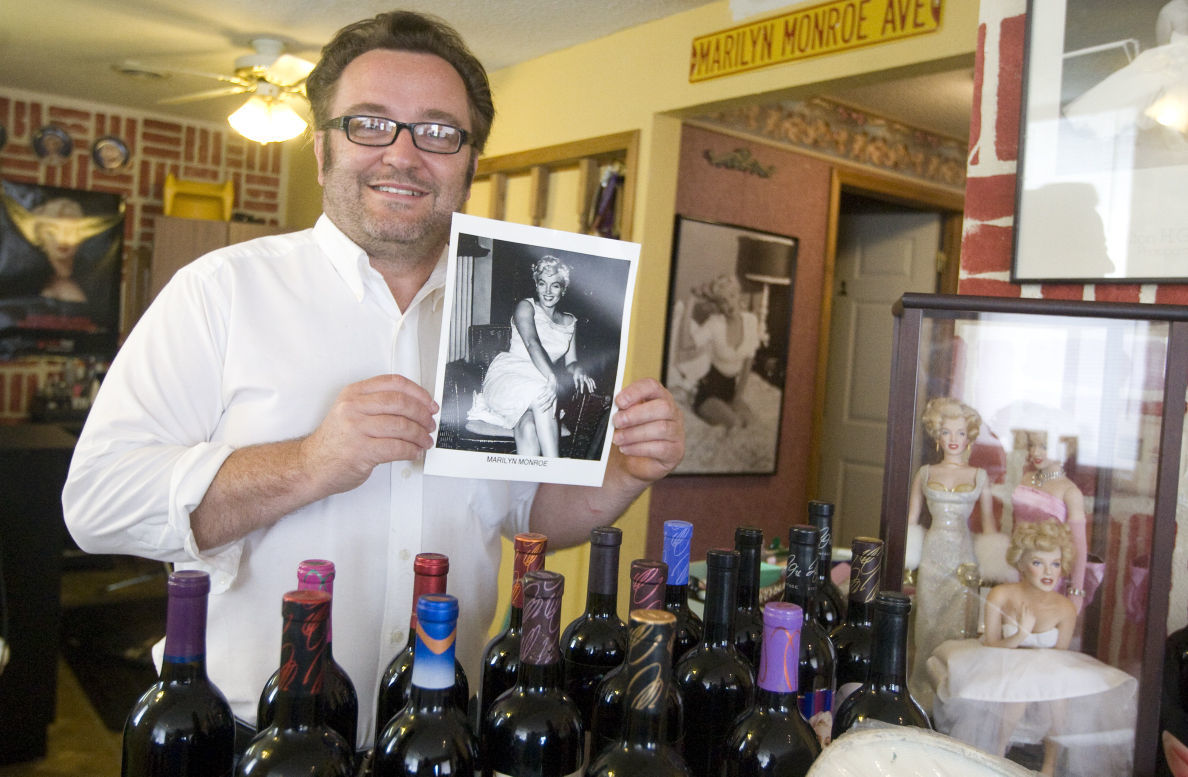 Pat Tieman holds a photo of Marilyn Monroe sitting in the house he now owns. He has also decorated Salon 101 with tons of Monroe materials including several autogrpaphed items. Bement is celebrating the 60th anniversary of her visit. 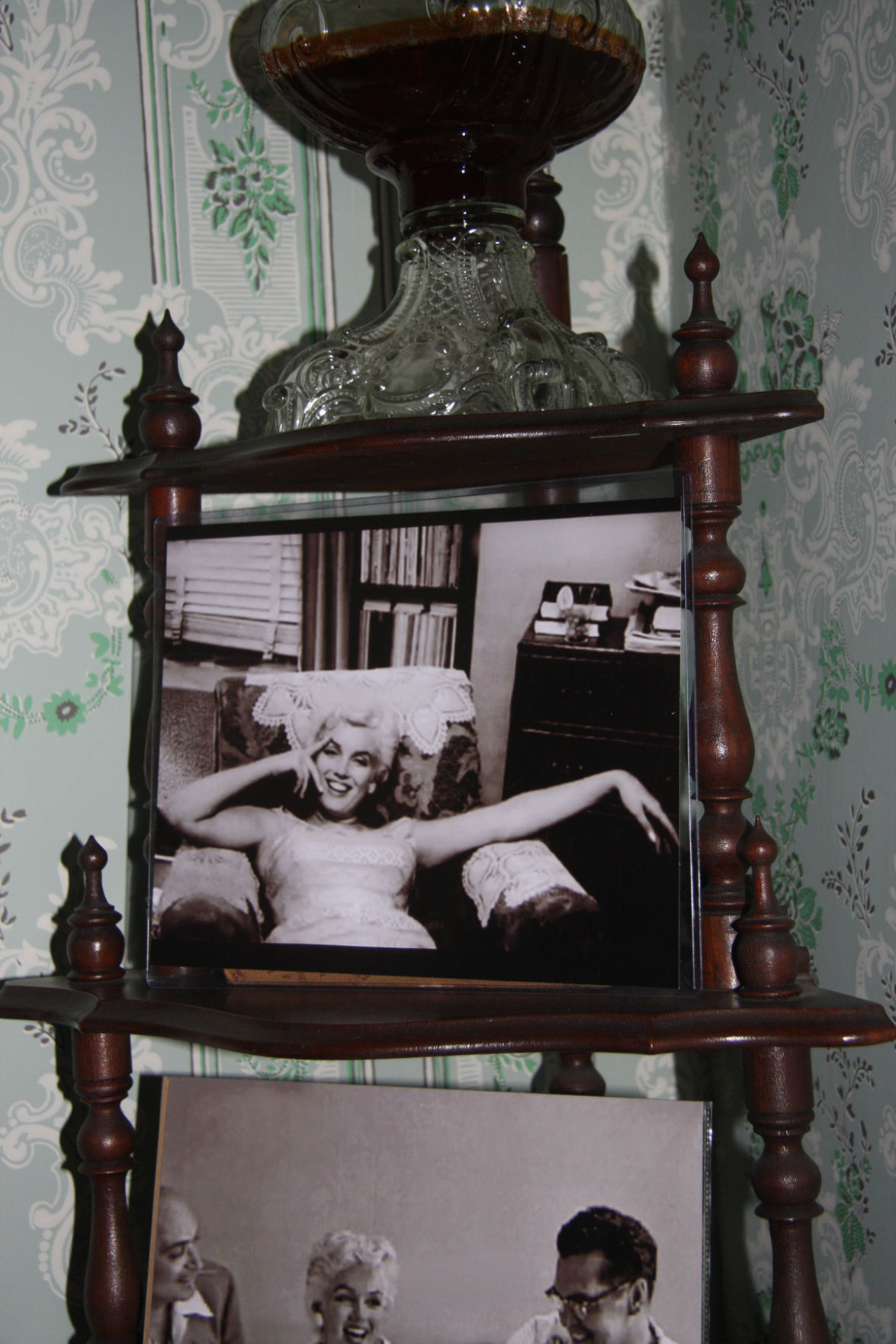 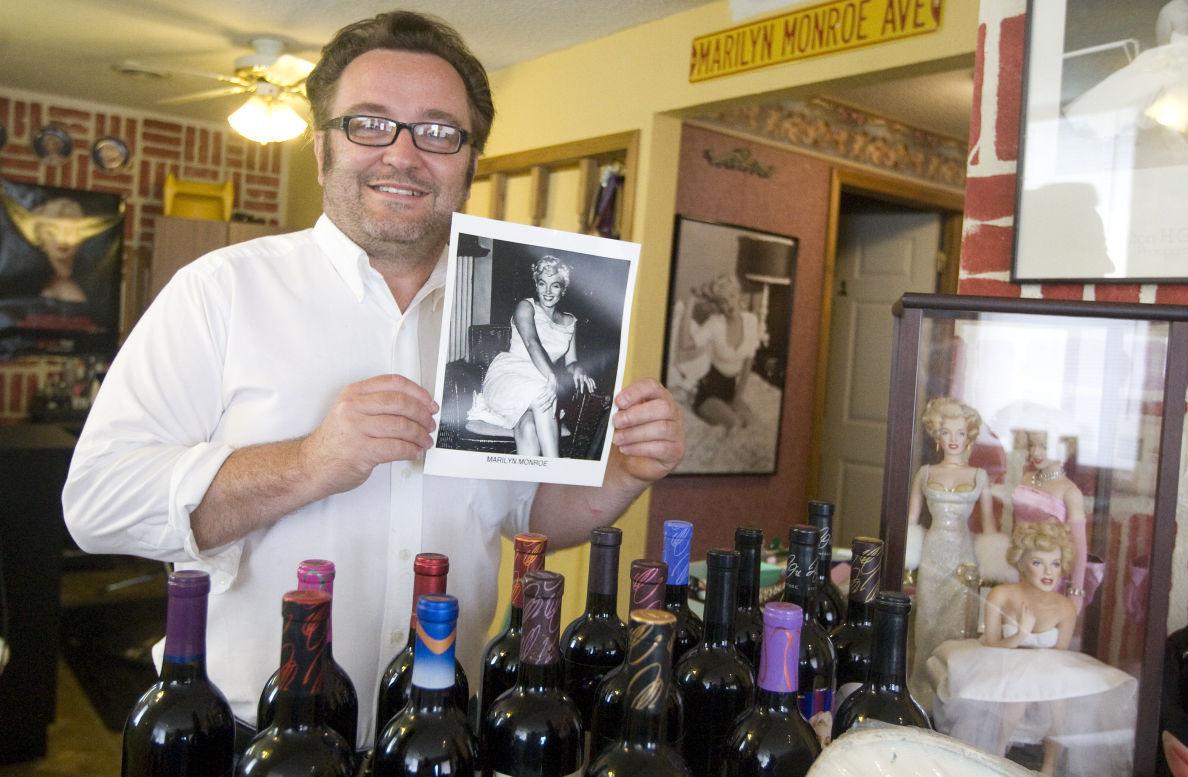 A cocktail of history and glamor: a piece of antique furniture Marilyn Monroe had admired in her 1955 visit to the Bryant Cottage State Historic Site now holds a picture of her relaxing on her Bement visit.

BEMENT – A screen goddess arrives to pay tribute to one of our greatest presidents, and the whole story is set in a prime example of small-town Americana.

That was the unscripted plot for Marilyn Monroe's Aug. 6, 1955, visit to Bement to check out its Abraham Lincoln heritage and help the town mark its 100th birthday.

Now, in August 2015, Bement is celebrating the 60th anniversary of Monroe's visit with an encore performance played out through photographic displays and memorabilia.

The celebration begins today and runs through Sunday and also features Monroe-autographed items ranging from a policeman's hat to a centennial book of the town's history.

On Saturday, visitors will have the chance to tour the house where Monroe stayed the day of her visit and soaked a swollen ankle and another home, the Bryant Cottage State Historic Site, is featuring a lavish picture record of the star's trip. Monroe was a major league Lincoln fan and toured the cottage where Lincoln met rival politician Stephen Douglas to plan debates for an 1858 Senate race.

Bryant Cottage site manager Marilyn Ayers, who came up with the idea of the Monroe visit commemoration, shows off pictures of the blonde leading lady, fresh from making “The Seven Year Itch,” gazing at furniture and artifacts that still sit in their same places.

Ayers points out that the “The Seven Year Itch” was the movie with the famous scene of Monroe's dress billowing up as she stands over a subway vent.

“They say filming that scene literally put the final nail in the coffin of her marriage to Joe DiMaggio,” Ayers said. “It was a bit too much, a little too graphic for him.”

Ayers has been taking a crash course in the star's history and said Monroe was invited to Bement by Carleton Smith, a native son and later head of the National Arts Foundation. The story goes that Smith had picked up a large hotel bill in New York City that Monroe didn't quite have the cash to pay, and she returned the generosity by accepting his Bement invitation. The town's connection to her presidential hero had also seriously piqued her interest.

Ayers said Monroe was a sharp, intelligent woman whose stunning looks cast her into straight-jacketed roles built around her body. Monroe was always seeking to break free, to give her intellect some challenge. She gave a short speech on Lincoln while she was in Bement, and a quote from her on display in front of a Lincoln bust in the cottage states: “I think of Lincoln as my father; he was a good and wise man.”

“She had a photograph of Abraham Lincoln over her bed in her home. She was a fan of Lincoln's,” Ayers said. “And now she has a become a part of the Bryant Cottage history, and part of this community's history, just like Lincoln.”

Carleton Smith's home, where Monroe stayed, is now owned by businessman Pat Tieman and his wife, Tracy. Pat Tieman runs the Salon 101 hairdressing salon, and his extensive Monroe memorabilia collection housed at the business will be on display Saturday while the house is open for tours.

Tieman had bought Smith's Victorian home at 101 E. Wing St. as a fixer-upper project in 1991 and had met his wife, the daughter of his then-Realtor, because she was a Monroe fan and wanted to see inside.

“I think she married me for the house,” he said.

He's since gotten swept up in the Monroe phenomenon and even traveled with his wife to New York City in 1999 when the star's personal items were being sold at auction. He wanted to try for the form-fitting white lace dress with blue underdress she wore on the Bement visit.

Back when she wore it, thousands of starry-eyed spectators had jammed Bement to try for a glimpse of Monroe, who caused a sensation when she judged a centennial beard contest and rewarded the winner with a kiss.

The Herald & Review reports at the time said that people were scaling rooftops to try to see her and, at one point, a backdoor of the Carleton house was ripped off its hinges.

Through it all, the Monroe smile never faltered, and she shines out of the Bement pictures as radiant but fragile; it's hard not to look at the images without remembering that, almost seven years later to the day, she would be found dead of an apparent drug overdose, one outstretched hand clutching a phone.

One of Tieman's customers, 90-year-old Pearl Crawford, said Monroe's movie legacy and appeal are destined to never fade and will reach across time and generations. Her great-granddaughters, ages 13 and 17, are thrilled to know their idol visited Bement. “They're Monroe fans,” she said. “They like her.”

Tieman said there is something accessible about Monroe who survived a rough childhood to become a megastar but whose quest for understanding and fulfillment made her vulnerably human.

“You feel she was a big star, but she could also be your friend, somebody you could relate to,” he said.

The Bryant Cottage State Historic Site will be open for its Marilyn Monroe photo exhibit from 9 a.m to 5 p.m from today through Sunday. The house where Monroe stayed, 101 E. Wing St., will be open for tours on Saturday only, from 10 a.m to 3 p.m. The Salon 101 business, 101 N. Macon St., is also open from 10 a.m to 3 p.m. Saturday and will display a Monroe memorabilia collection.

BEMENT – After a chat with Abraham Lincoln on Saturday morning and discovering the former president once split 3,000 rails to barter for a pai…

Pat Tieman has filled his downtown Bement Salon 101 with a variety of Marilyn Monroe items, a few of which include the movie star's autograph.

Marilyn Monroe chose William G. Porter's beard as her favorite during her visit to Bement in 1955.

Patrons at Salon 101 in Bement are surrounded by visions of the famous actress who visited the town 60 years ago. Pat Tieman runs the salon and also owns the house where Marilyn Monroe stayed in Bement.

Pat Tieman holds a photo of Marilyn Monroe sitting in the house he now owns. He has also decorated Salon 101 with tons of Monroe materials including several autogrpaphed items. Bement is celebrating the 60th anniversary of her visit.