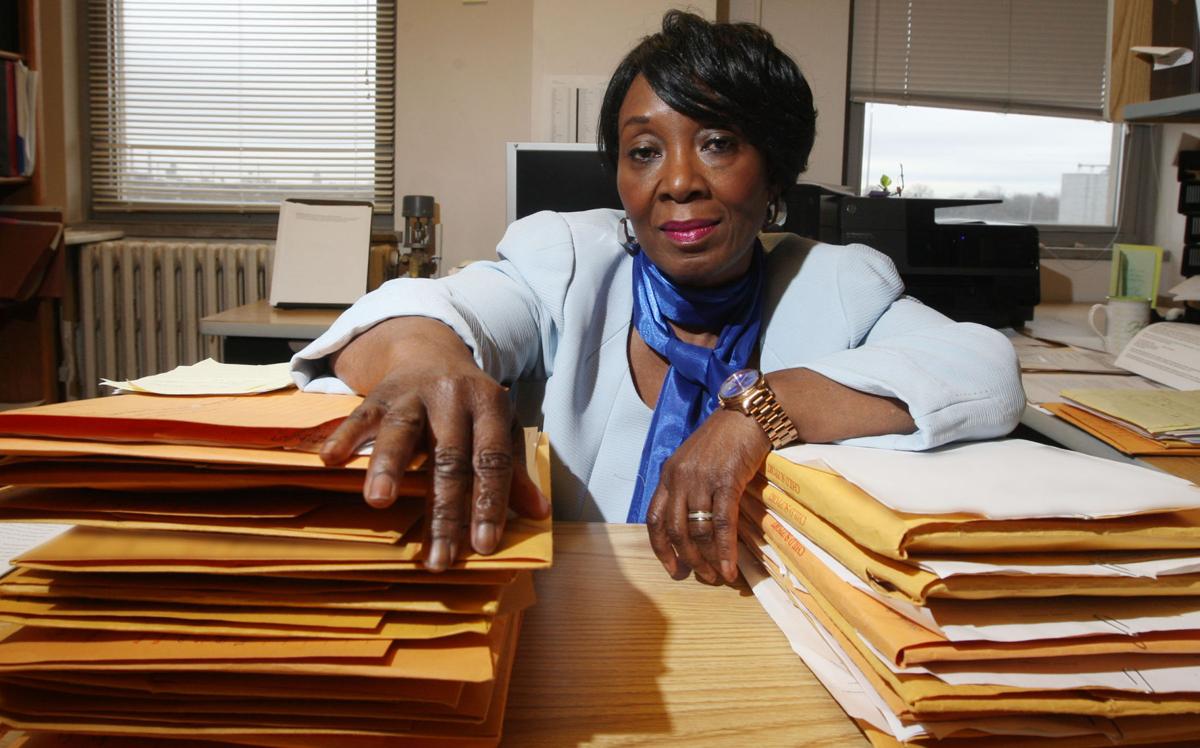 PHOTO BY JIM BOWLING, HERALD & REVIEW Assistant state’s attorney Ruth Waller is currently the only lawyer in the child support division and taking on as much of the large workload of child support cases as she can. A plan is in place for a second lawyer to help with the cases starting in early April. 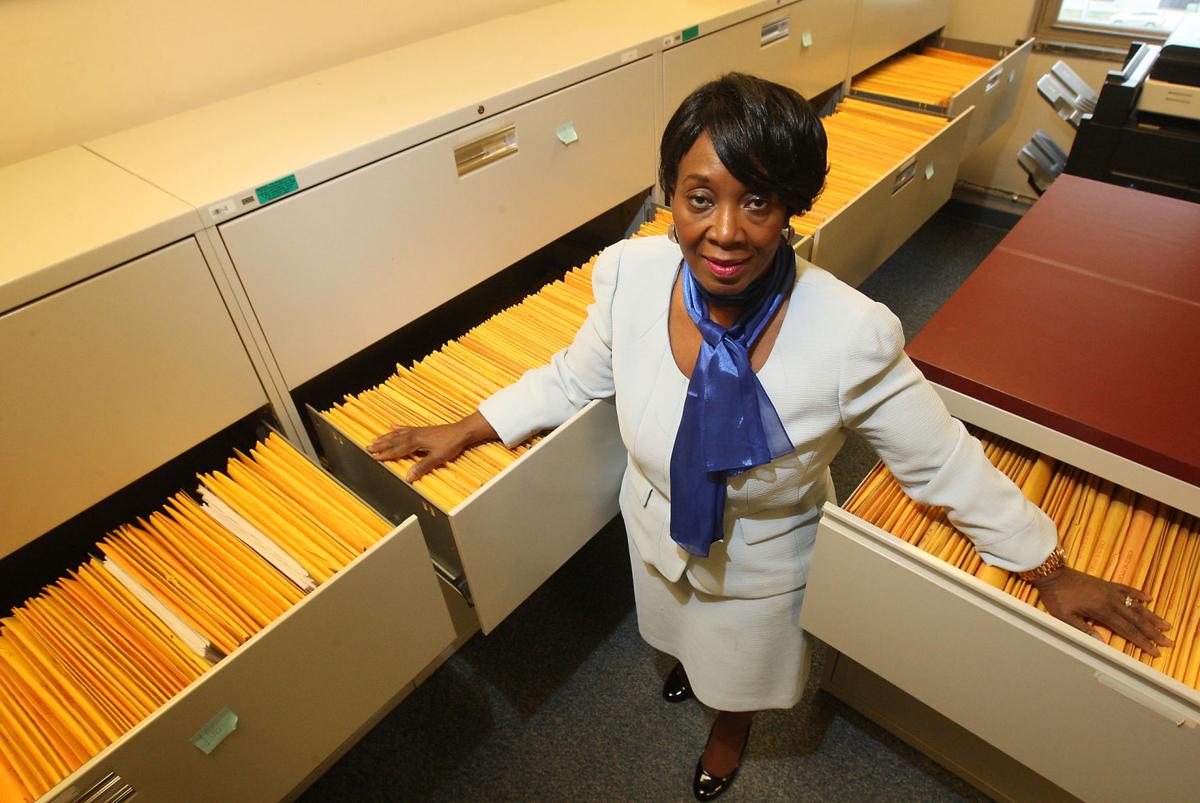 Assistant State’s Attorney Ruth Waller is pictured with a portion of the child support cases in Macon County.

DECATUR – The state financial rules deciding who gets what in the contentious world of child support are headed for a major recalculation.

It's arriving through a new law amending the Illinois Marriage and Dissolution of Marriage Act, the changes going into effect July 1. And the good news for noncustodial parents, usually men, is the promise of a fairer way to divide up expenses and decide who must pay what for the support of a child.

“I think the changes do have the potential to be earth-shattering,” said Jessica Jolly, a family law attorney with the Bourey Law Offices in Decatur.

Basically, the amended law will enable courts to take a broader view of all income sources available to each parent to meet a child's needs, instead of just focusing on the noncustodial parent.

Child support obligations will depend, in part, on how much each parent contributed to the combined household income while married, and the courts will also factor in how much time mom and dad can and want to spend with the child in deciding who owes how much to whom.

Jolly, who says she's already seen courts began to adapt to the new rules, hopes child support cases can ease away from “an adversarial battle in which the child is the linchpin of an income-driven fight.”

Moneywise, for example, it could be easier on the pocketbook for a custodial mother to let a noncustodial father have his wish to look after the kids more often. That might make better financial sense than fighting him over the length of time he has with them and then having to shoulder a bill of a $1,000 a month for child care.

Judges will always determine exactly how the new law is applied, but Jolly is optimistic: “Hopefully it will encourage a close and continuing (child) bond with both parents which is exactly not only what we should be doing but also what the state statute with regards to custody asks us to do,” the attorney said.

How big is the world of child support cases in the Land of Lincoln? Figures from the Illinois Department of Healthcare and Family Services, which initiates child support cases after being contacted by a parent, said the overall trend is down: Cases for 2016 stood at 475,543, off more than 10 percent from the 530,862 logged in 2010.

John K. Hoffman, an IDHFS spokesman, said the amount Illinois collects now averages $1.4 billion annually, and the number of cases with successful collection orders (to make an absent parent pay) is going up. “In Illinois today, 63 percent of Illinois cases have orders, up from 59 percent in FFY (federal fiscal year) 2012.”

In Macon County, the numbers are more impressive, with a current workload of some 6,220 cases and, of those, more than 5,600 have orders (for child support), which is a success rate of better than 90 percent.

Assistant State's Attorney Ruth Waller, senior supervisor of the child support division and its only licensed attorney, runs a busy five-person office that does everything from conduct paternity tests to working cases and pursuing reluctant parents who don't want to be found.

Waller said there is a persistent, hardcore group, men and women, who aren't interested in changing child support funding formulas because they just don't want to take any responsibility for the children they bring into the world. Sometimes, she said, it takes a jail sentence to remind them of their parental duties, and yet even that punishment may not make delinquent parents think twice about bringing more legal responsibilities into the world.

Waller's office does DNA testing to determine parentage and she said her heart sinks when, for example, the names of certain fathers crop up.

“It breaks my heart to see that this is the fourth child I've seen by this guy who is a drug dealer,” she said. “I know that child doesn't stand much of a chance; it's just heartbreaking.”

Waller, however, is not without sympathy for other parents who are short on cash to meet their child support obligations and tell her sad stories about the continuing struggle to find decent-paying work, or any job at all.

African-American herself, Waller is also not blind to the fact that racism, however subtle, still exists and that, too, affects the job prospects of some parents.

“Not everybody gets a fair shot,” she said. “But if that means you have to work that much harder to find a way around it then do it, just do it. You have to support your kids.”

And, whatever her personal feelings might be on the morality of a particular family's situation, she has learned not to judge every parental child support file by its cover. Waller cites the example of one Decatur “serial dad” who she said has fathered “18 children by probably 15 different women.”

She knows that in society's eyes, that does not make him a good person. “But we don't have to chase him down for child support – he gets it done,” said

Waller. “I don't know how he does it but he has a really good job, and it doesn't bother him that almost every dime he makes goes to his children.”

A detailed look at the child support guidelines, old and new

The world of child support calculations is complex and difficult to navigate. Here's a breakdown of the basic formulas, and the legal changes that kick in July 1.

One child is worth 20 percent, two children 28 percent, all the way out to six or more kids which would push the percentage to 50 percent.

How things will change

Under the coming new rules, the base calculation formula, using net income after taxes, still applies, but the governing principle is to hold both parents accountable for child support, not just the parent the child doesn't live with most of the time. The changes are based on an “income shares model” in which parents are designated a portion of child support obligations depending on how much they financially contributed to the overall household income when everybody lived under the same roof.

Using a math example provided by Dolci & Weiland, a Chicago law firm, a broken household with a combined income of $10,000 has spouse “A” contributing $6,000 and spouse “B” $4,000. Under the new rules, spouse “A” will likely be responsible for 60 percent of the basic childcare obligation, while spouse “B” would be on the hook for 40 percent.

Simplifying further for the sake of clarity, there are several other factors which can affect the new calculation. These include additional expenses on top of basic support, such as child care costs or even fees for extra-curricular activities at school. And, crucially, “parenting time”, the amount of time each parent is with the child, will now also play a big part in determining the numbers.

In the case of what the law sees as “shared parenting,” which means each parent spends at least 146 overnight stays with their child each year, the new support calculation changes again. The basic calculation still works off the number of children and the combined net income of the parents, but now the base support obligation (how much each parent owes) is multiplied by 1.5 to account for duplicate expenses and the price of transportation between residences.

See the 20 parents that owe the most in past-due child support accumulated under an Illinois court or an administrative support order.

💸 Bills upon bills: The 20 worst deadbeat parents of Illinois

A "deadbeat" parent is classified as those who owe $5,000 or more in past-due child support.

PHOTO BY JIM BOWLING, HERALD & REVIEW Assistant state’s attorney Ruth Waller is currently the only lawyer in the child support division and taking on as much of the large workload of child support cases as she can. A plan is in place for a second lawyer to help with the cases starting in early April.

Assistant State’s Attorney Ruth Waller is pictured with a portion of the child support cases in Macon County.